40 years since this epic price spike in silver 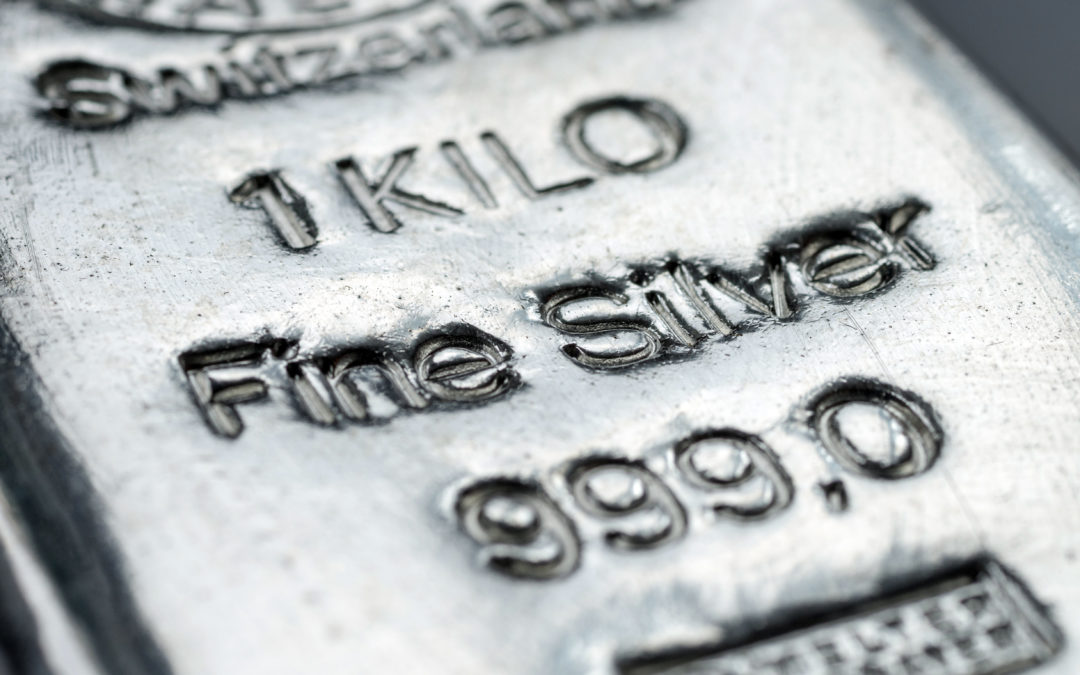 “Today, the old attitude of buying solid stocks as a cornerstone for one’s life savings and retirement has simply disappeared.

“Says a young U.S. executive: “Have you been to an American stockholders’ meeting lately? They’re all old fogies. The stock market is just not where the action’s at.”

That’s the closing paragraph of an article in BusinessWeek.

It was published forty years ago next month.

The most infamous investment cover story of all time

And it went on to be one of the most – if not the most – famous (or infamous) investment-related articles of all time in terms of poor timing.

The cover of the BusinessWeek issue in which the article appeared has earned legendary, cult-status.

It’s held aloft as the poster child of something known as the “magazine cover indicator”. (We looked at that phenomenon previously in Monkey Darts when we questioned the media’s proclamation of the demise of Bitcoin.)

Here is that cover, from August 1979, as BusinessWeek pronounced The Death of Equities: 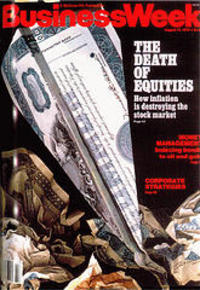 Stocks were dead, suggested the article.

After years of underperformance and inadequate protection against inflation, investors had lost interest in owning shares.

As the article explained:

“At least 7 million shareholders have defected from the stock market since 1970, leaving equities more than ever the province of giant institutional investors. And now the institutions have been given the go-ahead to shift more of their money from stocks—and bonds—into other investments. If the institutions, who control the bulk of the nation’s wealth, now withdraw billions from both the stock and bond markets, the implications for the U.S. economy could not be worse. Says Robert S. Salomon Jr., a general partner in Salomon Bros.: “We are running the risk of immobilizing a substantial portion of the world’s wealth in someone’s stamp collection.”

And so began one of the most impressive stock market bull runs ever!

At the time the article as published, the Dow Jones was trading at around the 850 level.

As Art Cashin, UBS’s director of floor trading at the New York Stock Exchange, put it:

“It was virtually the bottom of one of the most spectacular equity rallies in all history.”

The Dow went on to surge more than 1,076% over the next few months, before it was eventually taken down in 2000 by the bursting of the internet bubble.

So, that BusinessWeek magazine cover from 13 August 1979 turned out to be the ultimate contrarian indicator.

But something else spectacular happened that summer…

A bull market in inflation hedges

By August, the price of oil had risen 60% for the year.

The threat of recession was looming… and fear of a stock market meltdown was rising.

And as BusinessWeek magazine correctly pointed out, investors were looking elsewhere to put their wealth.

They wanted to protect their money from a possible market collapse AND the ravages of sky-high inflation.

And among the safe-haven investments that always come into play in times like that are precious metals like gold and silver and other hard assets.

At the time BusinessWeek compared returns on different assets during the 1970s:

“People no longer think of stocks as an inflation hedge, and based on experience, that’s a reasonable conclusion for them to have reached,” says Richard Cohn, an associate professor of finance at the University of Illinois. Indeed, since 1968, according to a study by Salomon of Salomon Bros., stocks have appreciated by a disappointing compound annual rate of 3.1%, while the consumer price index has surged by 6.5%. By contrast, gold grew by an incredible 19.4%, diamonds by 11.8%, and single-family housing by 9.6%.”

The world’s most famous silver bug

People were loading up on precious metals, and none more so than one of America’s richest people, a chap called Nelson Bunker Hunt.

Hunt was the son of a Texan oil billionaire, H.L. Hunt.

And with his brother, he’d been buying up silver since the early 1970s, as Business Insider reports:

“They bought 55 million ounces in late 1973 and early 1974 at around $3-$4 an ounce and sent 40 million ounces of it by chartered plane to Switzerland because they feared the US government would confiscate silver in the same way it had stolen gold from US citizens in the 1930s.

“The rationale for their buying made perfect sense. Nixon had taken the dollar off the gold standard, so it was now a purely fiat currency. The Hunts feared that their wealth was going to be stolen by the printing presses and they wanted to protect their immense inheritance (their father made billions in oil).”

The Hunt brothers were determined to protect the vast wealth they’d inherited from being destroyed by inflation and chaos in the world.

This from an article by Harry Hurt III, published in Playboy magazine in September 1980:

“Bunker personally believed that inflation would grow worse. More generally, he believed that life on earth—politics, living standards, pop­ulation—was going to grow worse, too, and he saw plenty of evidence to sup­port his view: There was a war in Viet­nam, turmoil in the Middle East and riots in American streets. In Libya, a left-wing radical named Colonel Muam­mar el-Qaddafi had recently deposed the king and was already making threaten­ing gestures at Bunker and the other American oil operators there.”

By the summer of 1979, the Hunt brothers had hooked up with a couple of Saudi Arabian businessmen with connections to the Saudi Royal Family.

Together, the four of them had formed a secretive trading company registered in Bermuda.

And through this vehicle, they’d been buying up huge quantities of silver.

“They bought 90 million ounces of silver through the partnership and also wanted to take delivery of the silver. Over the next few months, the silver price spiked sharply (from $8 to $16 during August and September 1979) and there were fears of a squeeze on silver supplies.”

Those fears were spot on.

In fact, the Hunt brothers and their partners were attempting to “corner” the silver market, effectively manipulating the price and controlling it.

There was so much buying volume, the commodity futures exchanges feared they wouldn’t be able to make delivery when the contracts became due.

This perceived shortage of supply led to a huge spike in the silver price, from $8 in August to $34 by the end of the year.

Silver and gold are on the move again

Now that surge in the silver price was mostly to do with the Hunt brothers’ campaign of buying as much as they could get hold of.

And ultimately the market exchanges and regulators put a stop to it.

Ultimately the Hunts were wiped out as the silver price collapsed, leaving them owing billions in margin.

But the initial drive for them owning silver in the first place was to hedge against the threat of inflation and a meltdown in the stock market.

Both silver and gold are good at preserving wealth. And when the world economy is heading for bad times, they attract scared money.

And geopolitical tension is reaching breaking point in several regions of the world.

The Fed is about to start cutting US interest rates to kick-start the economy, promote inflation and support asset prices.

So far, stock prices have responded by rallying.

But ominously, so have alternative assets like gold and silver. Silver is up 8% this week alone and 15% in the past two months.

As the US dollar loses its appeal due to the falling interest rate outlook, they could continue to do well.