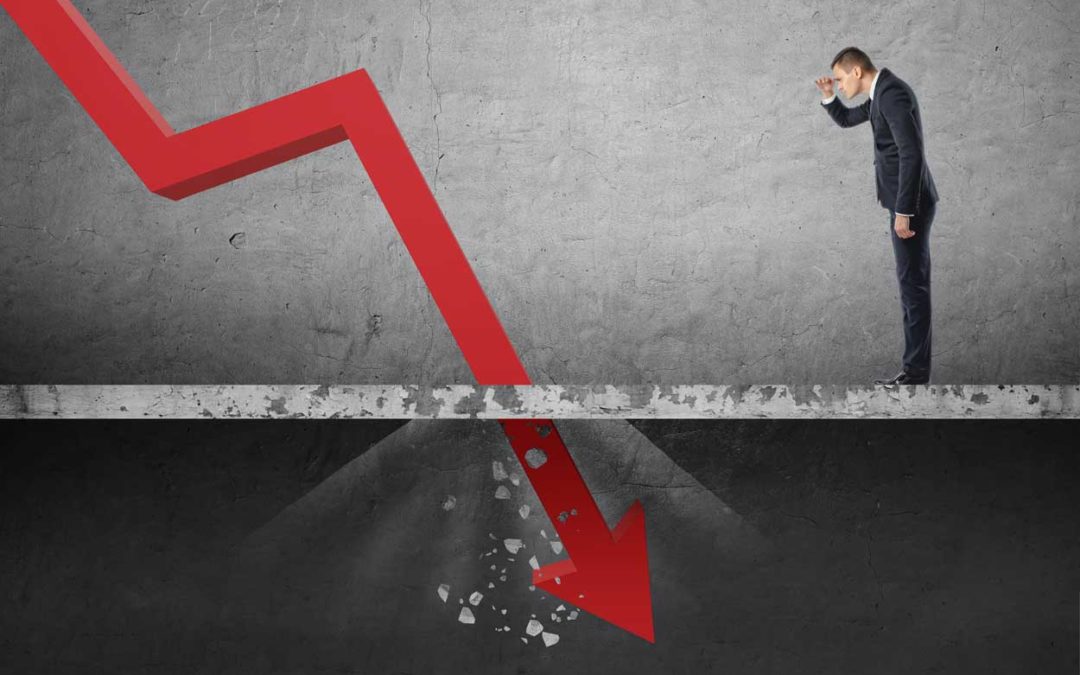 I’ve got to hand it to Robert.

He’s been doing some great work lately, uncovering thought-provoking themes not getting much coverage elsewhere.

Did you catch his latest on sleep deprivation in Tuesday’s Monkey Darts?

If not, check it out – it’s a great read… and Robert mentions some interesting-looking stocks.

He’s also been writing on plenty of other fascinating topics.

Like the one he did about the microbiome, the “forgotten organ” that’s so integral to our health and well-being. And the companies involved with microbiome profiling and gene sequencing.

Or his report on the current supply crunch in cobalt, a metal that’s critical for modern industry.

Or his chilling investigation into the ever-present threat of cybercrime attacks in the increasingly connected world we live in.

If you get the chance, I recommend making time to read all Robert’s recent issues…

… which, I have to say, it increasingly does.

Ominous signs of a market top

I could try to put a positive spin on things, I suppose.

I mean, investors are still gung-ho.

Just look at the signs…

The stock market’s still marching higher albeit in a three-steps-forward, two-steps-back kind of a way.

Stock buybacks are at never-before-seen levels. Goldman Sachs predicts 2018 will see a staggering $1 trillion in US company shares being repurchased.

All sounds great, doesn’t it?

And you can see why some might take these as positive signs for the markets.

But they’re also exactly the sorts of thing that you see at the top of the market… when businesses and investors alike are over confident.

“The importance of buybacks should never be underestimated. First and foremost, they’re a tried and true way to boost stock prices for stockholders without them lifting a finger, because they shrink the pool of outstanding shares.

“Secondly, and stemming from that mechanism, repurchases can be an invaluable safety net for stock prices — capable of engineering gains during periods devoid of other positive catalysts. When S&P 500 corporate profit growth shrunk for five straight quarters from 2015 through mid-2016, buybacks were there to pick up the slack.

“Yet while the efficacy of buybacks has been undeniable over the nine-year bull market, the forecasted explosion above $1 trillion does raise some questions.

“Will their stock-boosting continue to provide a backbone for the market indefinitely? Or is their record deployment a sign of reckless exuberance — the type that has historically characterized the end of market cycles, and the start of major downturns?”

The idea that they are so relaxed about the state of things that they’re almost sleepwalking – without a thought that something might go wrong.

It’s not a smart approach to looking after your money in my view.

But that’s just what happens when markets have been going up for so long.

This buyback thing is something a little different, though…

This isn’t recklessness on the part of investors.

It’s about companies themselves being complacent.

As we know, markets are near all-time highs (I’m talking about the S&P 500, as the Goldman Sachs work focuses on the US market).

Which means that companies are paying top whack to buy their shares back.

Is that a smart move?

No smarter than a regular investor buying stocks on sky-high valuations.

And as Business Insider reports, it’s something that’s not lost on the world’s most successful investor, Warren Buffett…

Shares “too darn expensive” for Buffett

“Berkshire Hathaway [Buffett’s holding company/investment powerhouse], is sitting on a record $111 billion of cash— a veritable war chest that could buy back an awful lot of stock. But so far, he hasn’t done any repurchases, nor has he made any splashy acquisitions.”

Buffett’s rationale is that the market is “too darn expensive”. That’s what he said back in February.

And guess what… the market’s even more “darn expensive” now!

Buffett didn’t become one of the world’s richest men and arguably its best investor by paying more than what an asset is worth.

He only ever buys things for less than their intrinsic value.

When Berkshire Hathaway is looking to make a new acquisition, Buffett wants to buy it for less that the value of its assets.

He won’t repurchase his own company shares unless the price is “below Berkshire’s intrinsic value, conservatively determined.”

So, who’s right? Who should we pay attention to when we’re looking at record share buybacks and trying to figure out whether it’s a good or bad thing?

I’m with Buffett, aren’t you? Business Insider sums it up:

“In the end, the world’s greatest investor is wary of buybacks and overall stock valuations, to the point that he’s frozen in place. And that should be food for thought for every blindly confident investor right now.”

He’s hoarding cash, waiting for the right time to pick up stock and other acquisitions.

And he’s got great past form for timing it right as Business Insider’s chart shows: 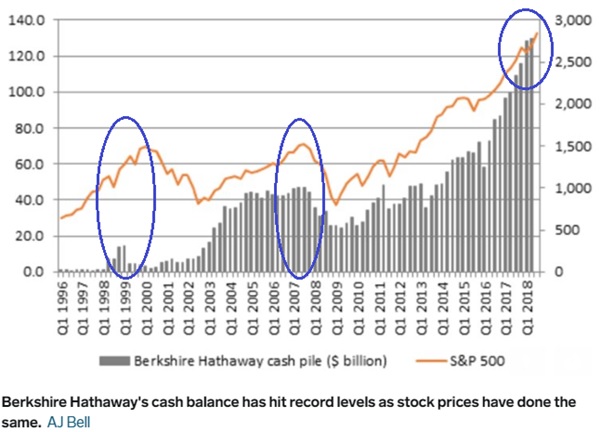 That orange line is the value of the S&P 500 index. The black bar chart represents Berkshire Hathaway’s cash holdings.

See how Berkshire increased its cash war chest ahead of previous market crashes.

And look at the relationship between Buffett’s cash pile and the S&P now, at the extreme right of the chart.

Buffett’s not buying now with valuations at these high levels. He’s waiting for the market to come to him.

Talking of valuation, I saw another frightening chart earlier that I want to show you.

whether to buy shares in a company.

Some of the most common valuation multiples are Price to Earnings, Price to Book and Price to Sales.

I’m not going to go into the detail of what they all mean right now.

But they allow investors to estimate a company’s value relative to earnings, as well as comparing valuations of other companies.

The one I want to talk about is the Price to Sales (P/S) ratio because that’s what this scary chart I’m going to show you is about.

The P/S ratio compares a firm’s market value (P) to the most recent 12 months of booked sales (S).

A low number is better than a high number, as it means that sales are greater in relation to the total value.

Investors and analysts often talk about the P/S of individual companies. But you can also use it for the whole market.

That’s what one bunch of analysts at the Leuthold Group have done. They measured the value of Wall Street, the S&P 500 index.

And they found that the P/S of the S&P is at the same level as it was in the year 2000, at the peak of the dotcom bubble.

Shortly after, as history relates, the market collapsed, wiping out billions of dollars of capital and destroying many investors’ portfolios and savings.

When they first realised what they’d found, the guys at Leuthold labelled it “the scariest chart in our database”!

That was… until they came up with this: 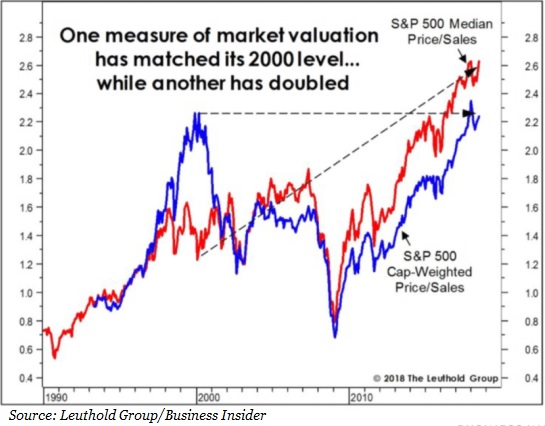 But the red line is the result of further analysis.

This time, instead of the market-cap-weighted P/S for the S&P 500 index, Leuthold calculated the median P/S for every company in the index.

And it’s even scarier!

Based on this measurement, the S&P 500 is twice as expensive as it was at the peak of the tech bubble.

Leuthold explains the difference in overvaluation now compared to that in 2000:

“It’s different in the sense that the overvaluation is more widespread — and the implications of that fact are potentially devastating. When the stock market does face its next Armageddon stage, there will be nowhere to hide.

“When the broader market got crushed in the dot-com era after the tech bubble burst, that was largely because of the massive concentration of positions in the [technology] sector. Traders could’ve theoretically protected themselves by hiding in more fairly valued industries. Investors today have no such luxury.”

Are we near the top of the market?

Regrettably, there will be no alarm bell to tell you that the stock market is to turn down.

If we knew for sure, we’d be short as all hell! And that’s a dangerous position to take when the market’s still pointing higher.

The best we can do is keep searching for clues. And increasingly from what I see, we need to be on alert.

Think about reducing exposure to anything that is too richly valued… and do what Buffett’s doing: hold cash, ready to buy at a better price.

And consider spreading into assets not correlated with the stock market: gold, art, gemstones, crypto assets, for example.

At the same time, it’s well worth keeping up with new, exciting investment themes. The kind that could show outstanding growth in the years to come.

Keep an eye out for Robert’s ideas every Tuesday in Monkey Darts. He’ll have some fascinating tech stories to tell you about…