Backing the winners in the global currency wars 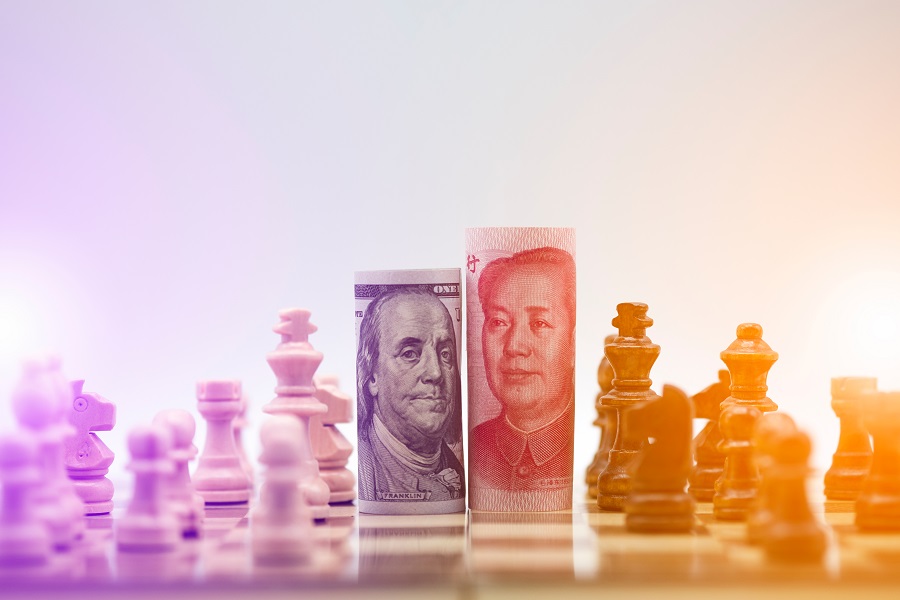 A lot can happen in a two-month stretch, in this world of money that intrigues us so…

For proof of that, look back at June and July.

It was all going so well for the stock market.

Investors were in full-on bull mode, spurred on by the promise of a US Fed rate cut… and a resolution to the trade war.

OK, so it’s not crypto-style triple-digit gains! (More on those in a moment!)

But in historical terms, 10% is what you’d call a decent annual stock-market return… delivered in just two months.

And it had those of us who’d been calling the top in the Dow looking a little foolish.

But then things went wrong…

On 31st July, the much-anticipated, longed-for rate cut from the Fed duly arrived.

But instead of sending stocks surging even higher into the stratosphere, the news has had the opposite effect.

So, what spooked the market?

Well, it wasn’t just the Fed. There was another reason for the mass stock market exodus.

We’ll look at that in a minute… and I’ll show you two markets that are springing into life as stock markets fall.

The way it looks to us, there could be more misery ahead for stock market investors… and further rewards for these ‘alternative’ assets.

Keep reading for that… but first how did we get here?

On 31st July, the Fed shaved 25 basis points off its key lending rate – the first cut since 2008, following the Global Financial Crisis.

Surely, that’s a reason for stock market cheer, no?

In its policy statement, the Fed said its decision to cut rates came “in light of the implications of global developments for the economic outlook”.

In other words: the lingering trade war for one thing. And slowing economies around the world (e.g. the US, China) for another.

What spooked the markets was both the Fed chief’s explanation… and the size of the cut.

For starters, the market probably wanted 50 basis points… or a sign that there’s more to come.

And Jerome Powell was at pains to stress that this was a “mid-cycle adjustment to policy” … NOT a series of cuts.

“Federal Reserve Chairman Jerome Powell hearkened back to the central bank’s 1990’s policy successes by suggesting he can sustain the record long U.S. economic expansion with just a modest reduction in interest rates.”

Trump pours on the fuel

The message from Powell last week was that “there is definitely an insurance aspect to it [the rate cut].”

But he said he “didn’t see Wednesday’s action as the start of an extended easing cycle.”

Those words sparked an increase in the selling on the Dow, as John Authers explained in his Bloomberg Points of Return blog:

“The stock market loathed this description and dived dramatically as the press conference continued only to perk up after a questioner pointed out that stocks were down and Powell quickly made clear that he was not ruling out further cuts.”

Yep, the Fed panicked when it heard the market was taking its “one-cut only” plan badly.

So, Powell left the door open for further cuts… to stop a meltdown. He could probably feel Trump’s eyeballs burning into him!

And it worked to a degree.

The Dow lifted off its lows for the day to end up 419 points higher by lunchtime the next day.

But then Trump opened his mouth and dropped another bombshell by announcing an escalation in global trade tensions.

This from the New York Times:

“President Trump… said Thursday that the United States would impose a 10 percent tariff on an additional $300 billion worth of Chinese imports next month, a significant escalation in a trade war that has dragged on for more than a year.

“The new tariff would come on top of the 25 percent levy that Mr. Trump has already imposed on $250 billion worth of Chinese imports, resulting in the United States taxing nearly everything China sends to the United States, from iPhones to New Balance sneakers to children’s books.”

Every time the mainstream press has started talking about an end to the US-China trade war being in sight, Monkey Darts has been sceptical.

And we’ve seen it many times before, haven’t we?

Just when markets look like they’re under pressure, Trump sends out a signal to say a deal is on the cards.

Everything is cool and dandy.

He was clearly expecting the Fed to deliver a bigger rate cut last week… so he could announce this new tariff on China as markets were in bull mode.

Well, he got that one wrong. And markets reacted by selling off even harder.

And to make things worse, China has retaliated to Trump’s latest move.

A new weapon in the trade wars

Not by threatening further tariffs. But by allowing its currency to weaken.

“The People’s Bank of China, that country’s central bank, took steps on Sunday to limit the impact of Mr. Trump’s next round of tariffs by letting its currency weaken past the psychologically important point of 7 renminbi to the American dollar for the first time in more than a decade.

“A weaker currency can make goods cheaper to sell abroad, allowing businesses and consumers to help offset the additional tariffs Mr. Trump plans to impose on Sept. 1. It also harms American exporters that are trying to compete with China.”

The move infuriated Donald Trump, who rushed to fire off a tweet:

This could be a major escalation in the trade war.

And with China using its currency as a new weapon, we can bet that the US and other countries China trades with will follow suit.

We could be looking at a full-blown currency war as central banks around the world weaken their currencies to stay competitive and try to generate growth.

It’s scary stuff… and markets have been giving their opinion loud and clear.

And alternative assets like gold, silver and cryptos are rising.

Gold has risen $110 or 7% since the start of August to hit its highest level in more than six years.

Likewise, silver has shot up 8% in the last week to hit 14-month highs.

Investors are looking for safety as they fear what’s coming.

They’re easing up on their allocation to traditional investments…

Meanwhile, earlier in the week, our resident crypto expert, Michael Mac, also picked up on the latest developments between the US and China.

In a note to members of his Crypto Traders’ Academy, Michael wrote:

“In the mainstream markets, Trump has escalated a trade war with China and in response China is manipulating its currency. Gold and Bitcoin (digital gold) are both beneficiaries of this type of global currency instability.

“At this stage of the Bitcoin market cycle when we are in the bull phase, it doesn’t take a lot of news like this to spike the price further still which is where holders in Bitcoin can sit back and benefit…”

Bitcoin is behaving like a safe-haven. And it’s attracting an influx of capital as investors seek returns as mainstream assets and currencies are falling.

Now, if you’ve been reading these emails a while or have any knowledge of Bitcoin, you’ll know that it won’t be a straight line up from here!

The price will move up and down as any market does, and with larger swings along the way.

But if Michael’s right, the overriding trend for Bitcoin, Ethereum and many of the sound cryptocurrencies is UP from here.

In fact, if his predictions in this free video report are right, Bitcoin could be setting up for a move to $100,000 per coin.

And the gains could be even bigger in some of the other cryptos Michael’s got his eyes on.

I won’t go into the details right here.

But if you want to understand Michael’s thinking and see how you could dip your toe into this exciting market, you should watch his video.

As I said, two months is a long time in these fascinating markets.