Be prepared for a “storm of inflation” 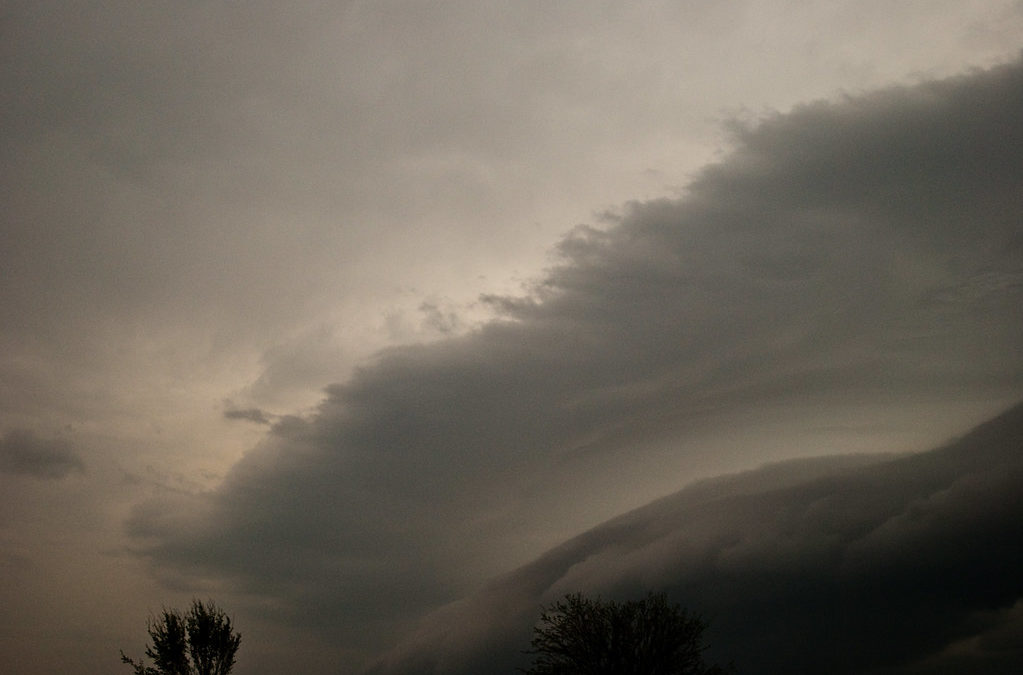 “The President made you chairman of the Fed… You are deeply in his debt. He expects you to be loyal.”

Those were the words of John Ehrlichman, Richard Nixon’s Chief Domestic Adviser.

He was talking to Chairman of the Federal Reserve Chairman, Arthur Burns, in 1971.

And the message was coming right from the top: Cut rates or else.

Advice from the expert

Nixon had made Burns Fed boss partly due to something he’d said years earlier.

In 1960, Nixon was Vice President as republican President Dwight Eisenhower was coming to the end of his second term in The White House.

Nixon decided to throw his hat in the ring for the top job.

And he sought advice about how to run his campaign from Arthur Burns.

Burns was a bigshot economic advisor to the Eisenhower administration.

And he’d earned a reputation for economic acumen during his time as head of the National Bureau of Economic Research.

According to The New York Times, Burns warned Nixon that unless the Fed slashed interest rates and Congress cut taxes, the Democratic candidate, John F. Kennedy would win.

He turned out to be right.

Taxes and rates didn’t come down significantly and Nixon lost.

But he’d seen the value of Burns’s advice.

A job at the top

When Nixon did eventually win office in 1968, he brought Burns in as an advisor and then put him in to the top job at the Fed.

But the friendship the two men had developed before Nixon took office soon ended.

Nixon wanted drastically lower rates to boost the economy… and get voters on his side. (Ring any bells?)

But Burns was wary about sparking too-high inflation.

So, although he and the Fed did agree to lower rates, he did it in small 25-basis point moves.

And that wasn’t enough for Nixon.

Nixon started pointing his finger at Burns, saying the Fed was risking a recession.

Which sounds like Donald Trump’s lambasting of his Fed Chairman, Jerome Powell, doesn’t it?

This from the Irish Times in August 2019:

“President Donald Trump called Federal Reserve Chairman Jerome Powell “clueless” and blamed his policies for signs in the bond markets that a recession is looming.”

Later, when Burns was forced to raise interest rates to control rising inflation, Nixon’s team smeared Burns in the press.

Only rather than planting stories in the papers, Trump goes direct and tweets for the whole world to see what an idiot he thinks Powell is!

Trump needs to be careful what he wishes Powell to do.

Back in the 70s, Arthur Burns gave in to Nixon’s hair-brained scheme to juice up the economy.

He cut rates whilst the President ordered a freeze on prices and wages.

But it also effectively masked inflation (for a while).

The resulting economic performance led to Nixon’s re-election in 1972.

(Which is what Trump is desperate to achieve with his attempted manipulation of the economy.)

“Nixon’s imperiousness cost him the presidency and the United States its economy. A storm of inflation followed when the price controls ended; Burns’s interest rate increases proved far too modest. Burns, the prophet who had spent a career warning of inflation, had carried out policies that caused it.”

Of course, things aren’t exactly the same today as they were in the 1970s.

For starters, the Fed claims to be independent and apolitical.

And Powell is adamant that the bank will not bow to presidential pressure, as Burns did.

Also, when Nixon came to office in 1968, inflation was already running on the high side at 4.7%.

We don’t face those kinds of pressures today.

There are currently no signs that energy prices will spike, although as we’ve seen that can quickly change in the event of political tensions in oil producing regions.

Going all out to spark inflation

And right now, inflation is low historically – below where the Fed wants it to be, which is 2%.

That’s why Powell’s Fed has taken to cutting rates three times this year… to try to spark a rise in inflation towards the 2% target.

Currently, Powell believes he’s cut rates as low as he needs to go.

Money is cheap enough, says Powell, to encourage borrowing and promote growth and inflation… but not so low as to risk dangerously high inflation like that seen in the 70s.

He wants negative rates – like his competitors in Europe and Japan.

Here’s the message he sent out a couple of months ago:

“The Federal Reserve should get our interest rates down to ZERO, or less, and we should then start to refinance our debt. INTEREST COST COULD BE BROUGHT WAY DOWN, while at the same time substantially lengthening the term. We have the great currency, power, and balance sheet… The USA should always be paying the lowest rate. No Inflation! It is only the naïveté of Jay Powell and the Federal Reserve that doesn’t allow us to do what other countries are already doing. A once in a lifetime opportunity that we are missing because of “Boneheads.”

Which means he’ll keep piling on the pressure, you can count on it.

Stock markets continue to soar. And the economy is still expanding.

But at the first sign of negative news or another wobble in the markets (maybe on Monday when Americans are back from Thanksgiving festivities), Trump will take to Twitter again…

Powell maintains he won’t bow to this kind of pressure from the Boss.

But that doesn’t mean he won’t be forced into cutting rates anyway.

“I argued for deflation for years while others called me an idiot. But now I believe the deflationary forces have run their course.

“Why? Because I see the Federal Reserve ready to do “whatever it takes” to generate inflation. There’s no limit to how much it’ll print, and I think it’s about to prove that to us.

“It also feels like we’ve just witnessed a climax in “deflation” sentiment, with $12 trillion in bonds trading at negative yields…”

Tom’s point is that everything the Fed has done to kick-start inflation so far has failed.

To get things working, they’re going to have to go all out.

There could well be more to come if inflation remains low… or there is some other poor data… or new threats from the US-China trade situation.

Jerome Powell has said that the Fed is unlikely to move to negative rates like Japan and Europe.

He’s seen how that policy has had little effect on lifting inflation for those central banks and they now have little ammo to fight falling growth.

But it depends what happens. And he hasn’t ruled it out entirely.

By doing that, it injects huge amounts of liquidity into the markets, supports asset prices and lowers interest rates.

And at the same time, it expands the Fed’s balance sheet.

The Fed did this QE stuff for years following the Global Financial Crisis.

And then, when the Fed thought it was safe to do so, in 2017, it stopped reinvesting the proceeds when the bonds matured. That had the effect of shrinking the balance sheet.

But as you can see on the chart below, the Fed recently started buying assets again. 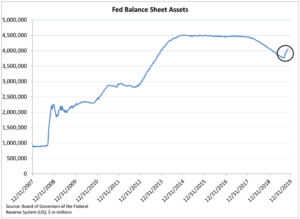 So, quantitative easing is back. On top of the already low interest rates.

It wants 2% inflation. But it could get a lot more than that.

So far, investors are ecstatic! Stock markets continue to hit new highs with all this stimulus and no sign of it being removed any time soon.

And gold is temporarily out of fashion, as Tom Dyson notes:

“Gold is still resting. It’s at $1,460 an ounce, down from $1,550 three months ago. I’m as bullish as ever. I couldn’t script a more perfect environment for buying gold if I were a Hollywood writer.

“What will really make gold rise is inflation… not 2% a year, but the kind of inflation that makes bond traders panic and voters get mad. That’d really put the wolf among the chickens. Gold would start rising like a penny stock.

“No sign of that yet, but if the Federal Reserve keeps pumping fake money into the system, it won’t be far away.

“Ironically, the thing that makes them pump the most is economic deceleration. A deep recession or two will motivate the Fed to open the tap to “max.” So we’ll see.”

In the meantime, consider holding some gold in your investment portfolio.

It could help protect you if we get a storm of inflation and a savage stock market sell-off.