It was the first time someone sent a message to another person using digital code.

The message was short.

But its transmission from the Supreme Court in Washington D.C. to the Mount Clare Railway Station in Baltimore was ground-breaking.

It marked the birth of the telecommunications industry.

Until then, to communicate over long distance, you’d have to send a hand-written letter by messenger.

But there was no way to convey a more complex message to a recipient quickly.

Not until 1844 when Samuel Morse combined his simple code of dots and dashes with his newly invented electric telegraph.

A new era for communication

There had been variations of the idea of the telegraph before that.

But Morse was the guy who got political backing for.

And turned it into a workable technology.

And after that iconic message had been sent and returned between Washington and Baltimore, it didn’t take long to catch on.

Before this breakthrough, it would take days to get a message to someone that a family member was gravely ill, for example.

And chances were, by the time you got the message – let alone completed your journey – the patient would be dead.

Morse’s invention meant you could get a message to someone, if not instantly, very nearly.

It all comes back to Morse

As The Atlantic explains, this was a huge development:

“The telegraph’s long-distance application marks the beginning of a new era of communication, in which information can travel faster than any human by any means of conveyance. If you run the videos of the deployments of all the telephone and Internet and social networks around the world in reverse, they’d all wither and contract until there were only two points on the electric-information network: that Supreme Court chamber and the Mount Clair railway depot in Baltimore.”

Think of the multi-billion-dollar industries that have been built on the concept of telecommunication first developed by Morse with his telegraph.

It started out with one-to-one (telegram/telephone) developed into one-to-many (radio/TV) and ultimately to many-to-many (the internet). 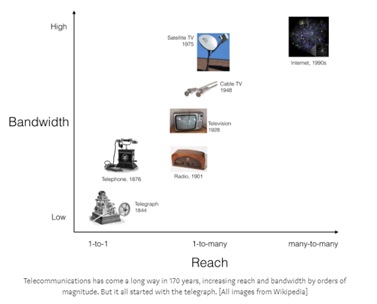 Morse’s invention and the transmission of that first message led to all of this… and to the wealth creation that came with it for industries, businesses and investors.

Blockchain: the birth of a new technology

And we could well be looking at something similar today with Bitcoin, digital currencies and the Blockchain technology that it’s all built on.

Morse invented the telegraph to deal with a problem.

The problem was the length of time it took for a human being to get word to another human.

Years earlier, Morse had been sent a hand-written message carried by a horse messenger that his wife was dying.

By the time he got to her, she’d already been buried.

And so, Morse gave up his established career as a painter and concentrated his energy on finding a better way to communicate over long distances.

Once his telegraph message was broadcast, people could see the potential.

And the race was on to develop this new technology and take it to new places.

And that led to innovation and new applications for the technology, enhancements and breakthroughs.

The guy who created Bitcoin, Satoshi Nakamoto, was trying to fix a problem too.

Remember, we’d just come through the Global Financial Crisis of 2007-08.

People had lost trust in the system. And in the banks and institutions that formed it.

So, Satoshi set about creating a decentralised, peer-to-peer electronic cash system or “e-cash” as he first called it.

The idea was to have a method of payment that was outside of the regular financial system.

So that you wouldn’t need a bank or any other third party to manage it.

Well, that technology is here now with Bitcoin and other cryptocurrencies.

Or more specifically, the ‘blockchain’ technology that it’s built on.

And this is where the parallel with Morse’s telegram gets more interesting.

Because although the blockchain came about to send payments, it can be applied to a whole range of other things.

“Blockchains are the first distributed consensus technology: they use cryptography to enable global coordination through collective self-interest instead of centralization.”

It’s a bit of a mouthful.

But the point is that the technology allows for the crowd to take control of things, rather than relying on some central authority.

That is the breakthrough – the equivalent of Morse’s transmission.

It’s likely that over the coming years blockchain technology will change the way we do things.

In almost every aspect of our lives.

So, it’s not just for the transfer of money, as bitcoin was originally intended to achieve.

But just about anywhere you can think of that needs a way to record and transfer data that is transparent, secure, auditable, and resistant to manipulation…

There are teams working on ways to use blockchain technology to make that process better.

That’s why investors and speculators are excited about blockchain.

It’s because they can see that there is huge potential for the technology to revolutionise the way we do things.

Bitcoin was the start. But there will be plenty of innovation in the years ahead.

And there is huge impetus driving blockchain developments forwards…

The Blockchain Research Institute (BRI) is a global think tank set up to study“blockchain strategies, applications and obstacles to implementation”.

According to crypto news site, Coindesk, the BRI “boasts the membership of government entities, major tech companies, financial industry players and global corporations such as Microsoft, IBM, the Bank of Canada and PepsiCo”.

And I couldn’t help but notice a spate of stories recently about big players from the investment world getting involved too.

And a fund backed by the famous Rockefeller family is also moving into cryptocurrencies, reports Forbes.

“Some 56 finance firms are said to be standing by ready to enter the crypto markets by the end of the third quarter,” writes Forbes.

So, if you’ve been keeping an eye on the prices of cryptos recently and noticed the change in sentiment, that’s probably partly why…

The big guns are getting involved.

After a tough start to the year, prices have staged an impressive rally across the board.

Bitcoin is up some 30% since the April Fool’s Day low.

And some of the smaller players have shot up even higher.

Don’t be surprised to see further volatility ahead though.

That’s what you get when you’re in the early stages of a new technology.

Lots of hope and potential.

Plenty of fear and risk, too.

And isn’t that why it’s such an exciting market?