The oil price surge is on…

Both sides of the supply/demand equation are supporting the price.

On the one hand, OPEC’s been suppressing production for the past six months… with no sign of opening the taps any time soon.

And on the other, a strong global economy means there’s no let up in demand for the black stuff.

In fact, the price of WTI (the US benchmark crude oil) has left a bunch of other markets for dust so far this year.

Look at this table from theatlas.com to see what I mean: 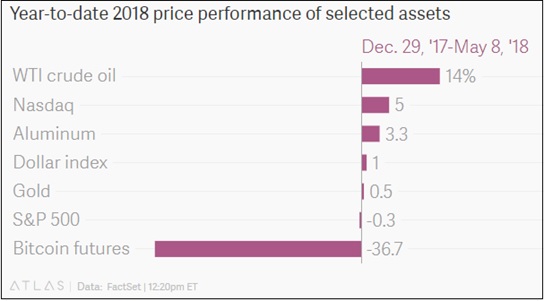 That chart was made BEFORE Donald Trump ripped up the so-called Iran nuclear deal.

That’s the 2015 agreement that removed international sanctions on Iran in return for it halting its nuclear weapon ambition.

A hot war between Middle East heavyweights Israel and Iran seems to have kicked off – missile strikes against the Golan Heights were met with a massive response by Israel on Iranian military positions in Syria.

It’s not all out war yet… but we’ve surely entered the danger zone.

And of course Trump’s decision for the US to pull out of the nuclear deal and reintroduce tough sanctions on Iran is a key catalyst for higher oil prices.

As reported in last week’s Monkey Darts, it could wipe out as much as a million barrels a day from the global oil supply.

And remember, that comes on top of already challenging conditions for the oil supply.

Like the production cuts from OPEC and Russia. And damaging instability in Venezuela which has also led to a 500,000-barrel per day drop in production.

So, it’s not surprising that since Trump started talking about the decision to leave the deal, oil has had another jump.

But it’s not just the pain we’re all going to be feeling as we fill up our cars.

To start with, if oil price rises get out of hand, it could have a devastating effect on the stock market.

Sure, oil company executives will be laughing.

They get more for their product.

And for investors’ perception of where markets are heading.

All of which means a surging oil price could be the spark that causes a massive sell-off in the major markets.

But there’s lots more going on right now that poses a threat to world markets.

More Tension With Russian and China

Remember, Trump has already had a busy 2018 threatening crippling sanctions on China and North Korea.

And he’s been continuing to rub Vladimir Putin up the wrong way with his treatment of the Syrian situation. (Something that still poses a very real threat to world stability and asset markets.)

The tariffs on North Korea will stay until Trump gets what he wants: the denuclearisation of the Korean peninsula.

Will that happen? Let’s wait and see.

Kim Jong Un just made a gesture by freeing those three US detainees yesterday.

But it’s what comes out of the forthcoming summit that counts.

And let’s face it, both Trump and Jong Un are prone to messing things up!

Let’s see if they can make some headway in the coming weeks.

If they don’t and tensions escalate, expect markets to react violently.

And how about China?

From what I can make out, the US could start imposing tariffs on as much as $150 billion of Chinese goods as early as 22 May.

It looks like that’s going to start happening, unless the two sides can reach an agreement. Right now, they seem a little out of reach…

Here’s Bloomberg with the story:

“The two sides appear to be at loggerheads, with both making long lists of demands the other won’t meet, analysts say. Trump wants China to cut its annual trade surplus with the U.S. by at least $200 billion by the end of 2020 and refrain from retaliation against proposed U.S. tariffs. China wants the U.S. to stop an investigation into the country’s acquisition of sensitive American technologies.”

I can’t see Trump or China backing down.

And that means we could well be moving towards the all out global trade war we’ve looked at in recent issues of Monkey Darts.

All the other signatories of the Iran nuclear deal – France, Britain, Germany, Russia and China – are furious with Trump for pulling out.
Not least because those sanctions Trump is putting on Iran will affect those countries too.

“America is giving European companies 90 to 180 days to wind down their operations in Iran, or they will run afoul of the American banking system. The sanctions on oil will require European and Asian countries to reduce their imports from Iran. Foreign financial companies are liable to penalties if they deal with Iran’s central bank.”

The official line from the Russian foreign ministry is that it’s “deeply disappointed”.

It sees Trump’s move as a blatant violation of international law.

Trump’s making enemies wherever he turns.

Could we see the world banding together to isolate the US?

I mean he’s doing a pretty good job of it himself, right?

As on French diplomat put it, his foreign policy is a dangerous “mix of unilateralism and isolationism” or “unisolationism”.

It’s time to diversify your risk

All this is unnerving stuff – especially if you have any money at all in the financial markets.

My bet is that at some stage (maybe not too far off), traditional safe havens like gold are going to come into play again. (And by extension, that means silver should gain some attention to.)

Often, those assets do well when other traditional markets are in trouble.

It’s not a case of cashing out all your stock market investments and sticking it all in gold bullion.

More a case of diversifying across asset classes to spread your risk.

We’re talking places that are outside the regular financial system.

Which of course could mean crypto assets like bitcoin and Ethereum, too.

“Bitcoin quickly moves up as soon as the U.S. President Donald Trump announced his decision to withdraw from the Iran nuclear deal, in a sign that Bitcoin is still considered as safehaven among many traders and investors and prefer to take shelter in times of uncertainties and risk-off.”

That would have surely annoyed some of those bigwigs who have been dissing cryptos recently!

There have been some amusing insults hurled at bitcoin lately.

Now ordinarily I’d never think of challenging the wisdom of the Sage of the Plains.

He’s made $85 billion as an investor, after all.

And if he doesn’t see the value in bitcoin, that’s his call.

But what does that even mean, “rat poison squared”?

It’s like the kind of insult you’d hear at primary school!

He went in with an even weirder jibe!

Bitcoin is like “trading freshly harvested baby brains” according to Munger, suggesting it’s immoral to trade in the cryptocurrency.

I repeat, there’s no questioning these guys’ genius when it comes to investing in traditional company shares.

But as to their condemnation of bitcoin and the crypto asset sector, I’m a little sceptical.

Either they just don’t get it.

Or they very much do get it and are intent on doing it as much damage as they can.

Why would they do that?

This is old ground we’ve covered before in Monkey Darts, remember?

We called out people like Jamie Dimon at JP Morgan. And Richard Turnill from fund management behemoth, Blackrock.

These guys are old-school finance guys.

They make money from investors pumping their money into stocks and bonds and funds.

And they see cryptos as a threat.

Every dollar that goes into bitcoin is a dollar less for them to make money off.

What’s this got to do with Messrs Buffett and Munger?

Their financial interests are tied to the success of old-school finance businesses.

Some of Berkshire Hathaway’s biggest investment holdings are banks and other financial companies.

So why not take any opportunity to defend your turf and bash the enemy?

It doesn’t make them right…

In fact, judging by the recent developments I’ve been reading about, the crypto market is about to get even more exciting.

This from The New York Times:

“The parent company of the New York Stock Exchange has been working on an online trading platform that would allow large investors to buy and hold Bitcoin, according to emails and documents viewed by The New York Times and four people briefed on the effort who asked to remain anonymous because the plans were still confidential.

“The news of the virtual exchange, which has not been reported before, came after Goldman Sachs went public with its intention to open a Bitcoin trading unit — most likely the first of its kind at a Wall Street bank.

It seems like the Buffett attack over the weekend knocked the bitcoin price just as it was heading for the $10,000 level.

That’s proving to be a tough technical level to crack for now.

But once it breaks to the upside, expect to see a lot of money flooding in and sending the price higher.

As ever, there are exciting times ahead for crypto investors…