Much talk about history-in-the-making this week…

Trump’s meeting with Kim Jong-un caught the world’s attention for hinting at the ‘complete, verifiable and irreversible denuclearisation of the Korean peninsula.‘

Now let’s see whether they follow through with some action.

Or whether one or both backtrack or fail to deliver, like every time before.

Right now, the world’s financial markets are kind of undecided.

Stocks are slightly up, gold is sideways.

Things could well move: stocks will likely fall and gold go up, as investors weigh up the implications for world stability.

I can’t help thinking it’s not all going to go as smoothly as the President would have us believe it will as he eyes up potential beachfront property on the North Korean coast.

There’s all this talk of North Korea rolling back its nuclear programme and the threat of war receding.

But across the border, the South Koreans don’t seem to be buying that.

They’re busy upgrading their military defences – in case the US pulls out and leaves Seoul exposed to an unpoliced Kim.

They’ve been here before.

Maybe they’re right to be so.

But let’s wait and see.

For the moment, markets are not reacting.

Given that the summit apparently went so well, you’d expect stocks to be up…

Especially seeing as “the U.S. economy is in great shape,”according to Chairman of the Federal Reserve, Jerome Powell, yesterday.

Waiting for something to spark a move – up or down.

But today, let’s turn our attention to a market where there’s been plenty of action in the last week…

What’s going on in the crypto market?

As you’ll have seen if you follow these things, there’s been some dramatic price action in the crypto market lately.

Over the past month, prices have been falling across the board.

And if you’ve been scratching your head about that, as I have…

Or if you’ve never got involved with Bitcoin and cryptos so far, but you’re curious about them..

You should have a listen to the fascinating webinar discussion about Bitcoin I heard earlier this week.

Not just fascinating, but eye-opening too.

It answered a lot of questions I had about these markets.

And I came away with a far better idea of what’s going on out there right now..

– What we should be looking out for

Like I said, interesting stuff and in a moment, I’ll show you how you can listen in on the discussion too.

It was with Nick Laight and the two crypto experts that head up Canonbury’s Crypto Traders Academy, Michael and Finn.

The guys got together to discuss where we are now in the market cycle for Bitcoin.

And one of the most important things I took away from the discussion was that we’ve been here before.

Both Michael and Finn have been trading these markets for quite a few years now.

They’ve seen plenty of twists and turns in the cycle.

And in fact, one of the most insightful charts I’ve seen lately is the one they showed comparing the price action over the past six months to what was going on in 2014. (I’ll show it you in a minute.)

And then the ‘bubble’ burst.

Since then, it’s been trending lower.

There have been plenty of powerful moves higher and dips along the way, but the general trend has been lower.

And according to Michael and Finn, this is entirely to be expected.

Michael says there have been four or five of these bubbles in Bitcoin over the past six years or so.

They’re just part of the cycle.

And for them, it’s just knowing how to trade those bubbles that is the key to making money in this market.

The point they make is that the current price action – the 65% drop from the peak – is entirely normal.

It’s a natural part of the market cycle.

And far from being something to fear, it’s a brilliant opportunity to position oneself for the next move higher.

Which is what Michael and Finn are helping members of Crypto Traders Academy prepare for.

Look at this chart: 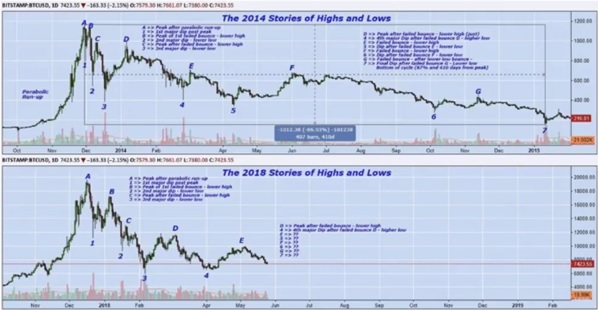 Sorry about the clarity of the text.

I just took a screen shot of the chart from Michael’s webinar slides and shrunk it down for this email.

It’s a lot clearer when you watch the full webinar recording (I’ll show you how you can in a moment.)

But for now, you can get the gist of it.

Look how similar the shapes of the charts are.

Michael says that 2013 was the last time we had a major bubble before the one at the end of last year.

And the second chart shows the peak from December last year and the price action since that bubble burst.

They’re not identical. But close.

And as Michael explains, comparing these similar patterns can be very useful for planning how to trade (or not trade) the market:

“If you have some kind of an idea or a concept of where it’s heading, that can completely inform. And when you’re trading, patience pays. If you know when to trade, when not to trade, that’s what it’s all about.”

The old chart doesn’t show you exactly where the current one is heading. But it can act as a kind of map to help you steer your way.

Now Michael and Finn do a vast amount of work studying price charts.

They know exactly how Bitcoin has behaved in the past.

And by comparing previous charts to the current one, they can get a good feel of how the price is likely to act in the future.

Now at this point, any reader who’s sceptical about technical analysis (studying charts) is probably groaning.

But bear with me. It’s important to understand why mapping the charts really can help you trade the markets.

One of the cornerstones of technical analysis is that history repeats.

OK, not EXACTLY. But to a degree. And to the extent that you can have a great go at predicting how price is likely to act… based on what has happened before.

He wrote the ‘Bible of charting’, a book called Technical Analysis of the Financial Markets.

Here’s what he says about trading by looking at price patterns:

The point is that price will often follow a pattern that has happened before.

Price will often react at key levels where it has traded before. And so, by studying the charts, you can know which levels to watch closely in advance and plan for different scenarios.

And given how long both Finn and Michael have been studying Bitcoin charts, they have a sound knowledge of Bitcoin’s key levels.

Which means – as an example – if they know there is a strong previous ‘support’ level, there’s a good chance that it will act as support again.

A support level is an area where there are lots of buy orders.

So, if the price is falling, when it gets to that level the buy orders are triggered and the price will bounce.

And as I discovered in the webinar I watched, there are lots of key price levels the guys are watching for in Bitcoin. These are levels that, if reached, they could be great opportunities to enter the market.

Why Bitcoin could be heading far higher than the previous peak

Despite the huge sell-off we’ve seen in the Bitcoin market, both Michael and Finn are both very bullish on the outlook.

Michael from a technical (chart) perspective and Finn from a fundamental viewpoint.

By ‘fundamental’, I mean the way the whole crypto market is growing and maturing.

So not just price action.

It’s also the fact that many of the major financial institutions like Goldman Sachs are setting up crypto trading desks.

This will bring huge money into the market – and set off the next move higher.

We’re talking about the potential for Bitcoin far exceeding it’s all-time high of $19,783 in the next bullish cycle.

But it’s not a case of blindly jumping in.

One of the things I took away from this webinar is that even despite the 67% drop from the peak, there is still the chance Bitcoin could move substantially lower from the current $6,500 level.

In fact, the way the ‘roadmap’ looks to Michael right now, that is very possible.

It’s very much a case of being patient with the market and watching for key levels to be reached. And then planning the strategy around that.

That’s what Michael and Finn are guiding their Crypto Traders Academy members on. And they will tell them when it’s time to buy in. Not just Bitcoin, but other cryptos too.

How you can discover Michael and Finn’s strategy

The webinar discussion I watched earlier this week was part of that strategy guidance.

And it was packed full of loads of excellent insights of what the guys are looking at to plan their move for the next part of the cycle.

Another big take away from me was a reminder of something that I have known for years, but it’s easy to forget…

It’s easy to make money in a bull market if you’re in the right place. So, if you were in Bitcoin from the start of 2017, you had a great chance to make some money (if you got out before the sell-off).

But just as important is to look after your money during the bear market part of the cycle. Because if you lose it call, you can’t then take part when the bull market returns.

Which is why the guidance they’re giving their Academy members is so valuable.

If not, you should watch it right away.

If you’re not a member, no problem.

I can’t give you a link to watch it direct here (as it’s reserved for members).

And although officially the doors aren’t currently open, I’ve asked Nick Laight if he can let you have a trial membership to the Academy if you act today.

If you missed out on the last major bull run in Bitcoin or if you could do with some help knowing how to navigate these markets, I recommend you check it out.

If Finn and Michael are right – and they have huge experience in these markets – then it’s time to prepare for the next major Bitcoin rally.

You could do with these guys on your side.

Take a risk-free trial membership here – and then head to the members’ area right away to watch this eye-opening discussion.

I’ll be exploring the crypto markets more in the weeks ahead.

I’ve just seen some interesting research that claims Bitcoin is the new ‘crisis’ hedge – where money rushes in times of trouble.

If things go off track between Trump and Kim or if stock markets are hit by another shock, perhaps that will be the trigger that sets Bitcoin off on a new surge higher…

I’ll be in touch next week.