Is the bear market over?

Look at a chart of the US stock market over the past few weeks and you could certainly make a pretty optimistic case.

It sure looks like we’ve seen the bottom of this big sell-off:

The Dow dropped around 38% between 12th February and 23rd March.

But since then, it’s bounced 32% in just over a month.

Crazy bulls are back

What came out to send the bulls into a frenzy?

A few things are going on, all lending hope – or maybe wishful thinking – to investors that we’ve seen the worst. 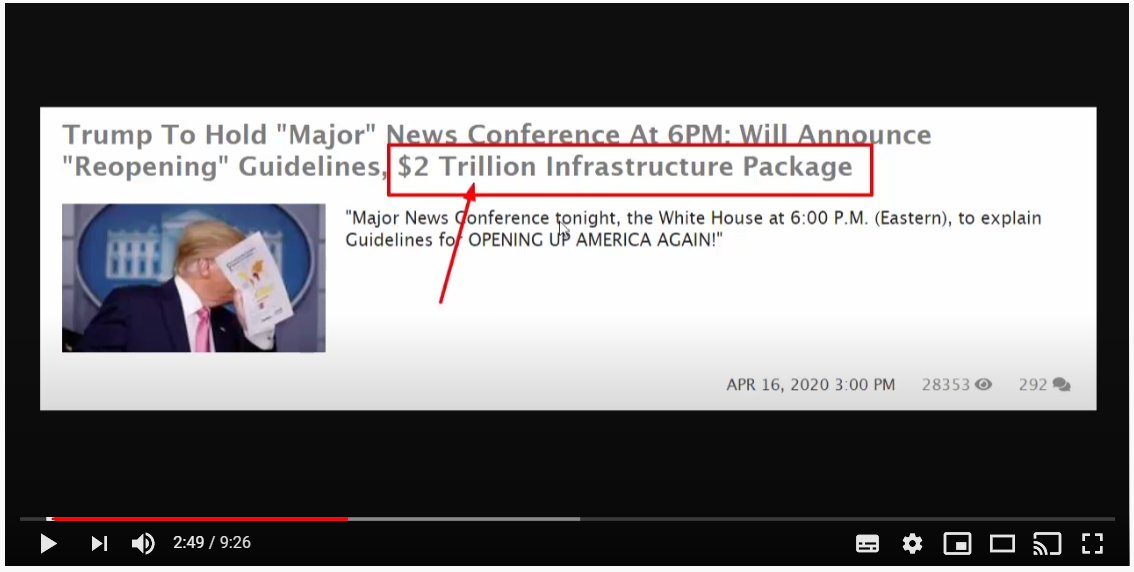 (If you’re not already getting this, I recommend you do. It’s a free 7 to 10-minute video Keith records each day before the markets open. It clearly explains what’s really going on in the markets and what to look for. A great way to start the day. Sign up for free here.)

So, first, Trump is pumping up the markets again with his “America is doing great” rhetoric.

He came out on Thursday with talk of “Opening Up America Again”.

Despite the still rising number of Covid-related deaths and new cases around the world, Trump is desperate to get the economy going.

So, he’s unveiled a three-phase plan to relax shutdowns across the country, based on “case data on the ground”.

Basically, he’s left it up to governors of individual states to decide what pace they can remove restrictions and let people get back to work, depending on whether numbers of new cases are falling.

It all sounds good… in a general feel-good way.

But there’s not much detail about how to achieve it, reports the Mail:

‘I’m concerned that this plan is laying out what needs to happen, without saying how it’s going to happen and what the federal role is,’ said Jeremy Konyndyk, former director of USAID’s Office of US Foreign Disaster Assistance under the Obama Administration, told CNN.

“Konyndyk said that the 10-page plan offers no specifics on how testing capabilities, contact tracing, and access to personal protective equipment (PPE) would be ramped up to the massive levels needed to relax shutdowns.

“We need a much more detailed implementation plan. It’s fine to say the states need much greater access to PPE. How are they going to get that?,’ he said.”

That’s all to be figured out by Trump’s minions.

Meanwhile, he gets the credit for displaying fortitude and authority and giving the country hope that the end of the crisis is within reach.

Trying to rescue a second term

Trump sees hopes of a second term fading if the economy and the market performs badly.

And Covid-19 came along at just the wrong time.

There are less than seven months to go until the election in November (if it’s not postponed due to the virus).

Until the coronavirus first appeared in December, the stock market was roaring.

Unemployment was low and falling.

The Federal Reserve was cautious. But not scared.

Four months on and it’s a different picture.

The numbers of unemployed in America have ballooned to a level never seen before.

That was worse than the 5.1 million analysts were forecasting.

And it adds to an already grim picture that’s been building over the past four weeks.

This chart from the Financial Times shows the scale of the problem: 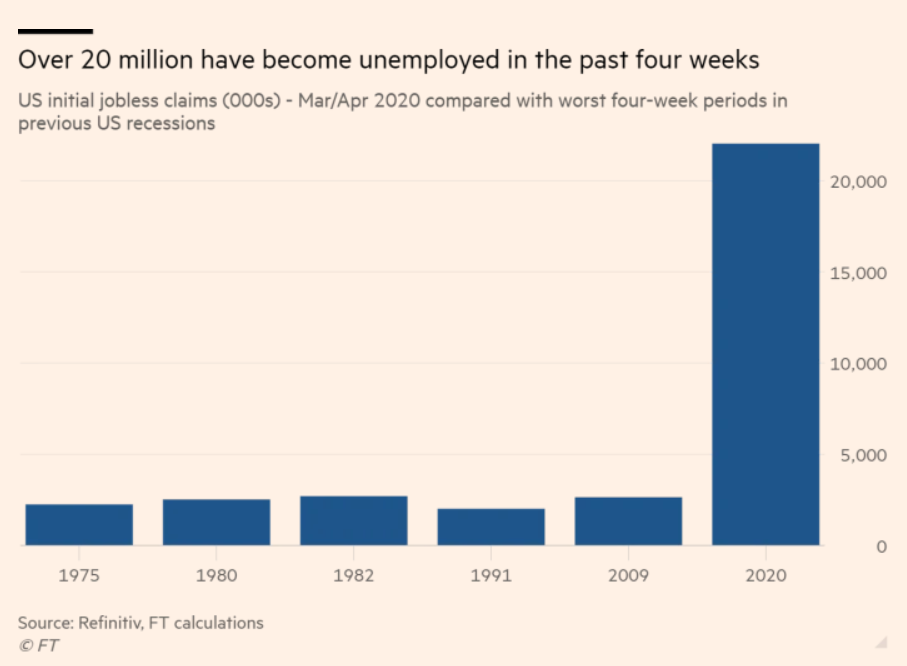 Even at the depths of the Global Financial Crisis (GFC) of 2007-2009, the worst four-week count for jobless claims was 2.64 million.

But the shuttering of the US economy has seen move than 20 million people lose their jobs in the past four weeks.

We can see what’s happening here in the UK.

The Institute for Employment Studies says between 1.5 and 2 million UK jobs have been lost in the past month.

That’s on top of a possible 9 million people who could end up being furloughed, according to British Chambers of Commerce estimates.

And it’s the same picture in just about every country in the world that’s been hit by the virus.

Businesses forced to cut back on wage bills – with or without taxpayer support – in order to survive this once-in-a-generation (hopefully) crisis.

They can’t keep paying people if the demand isn’t there for their products and services.

And again, the data is clear.

In the US, pre-crisis factory output growth has shuddered into reverse.

“Manufacturing output fell 6.3% in March, following a 0.1% decline in February, the Federal Reserve said in a Wednesday report. Total industrial production fell 5.4% in March. Both figures posted their largest declines this month since 1946.”

Again, those figures are far worse than what the US experienced following the GFC.

According to Ian Shepherdson at Pantheon Macroeconomics, the collapse in manufacturing output was “much bigger than the 3.5% drops in September and December 2008, the worst months of the Great Recession.”

So, with such dire economic data, it’s no surprise that Trump has come out with a promise of how he’ll get the economy firing again.

Trump has been promising a $2 trillion infrastructure since before he came to power – it was an election pledge.

And so far, nothing has come of it.

But it’s a great way to keep the optimism of the nation going… and his chances of re-election alive… by dropping it in every once in a while.

And that promise, together with the unprecedented monetary stimulus (money printing) from the now petrified Federal Reserve, is keeping markets in rally mode.

Investors are faced with grim economic data the likes of which has NEVER been seen before and are still lining up to buy shares.

Because they believe that the Fed and the Trump administration can guide the US through this crisis.

And of course, ultimately, they will be able to.

I’m just not convinced that they’re going to do it any time soon, despite the recent impressive rally.

No one knows with any accuracy the final extent of damage that Covid-19 will wreak on the world.

How many lives will be lost…

How many jobs wiped out…

How many companies going bust…

How much debt will be racked up…

Chucking trillions of dollars at the problem might keep the markets going up in the short term.

But I wouldn’t bet on it being a smooth ride ahead.

There could be a lot more turbulence to come – and possibly even a revisit to test the recent lows.

I’d even question the legitimacy of the mass surge in shares of drugs company, Gilead Sciences, last week.

Gilead is a stock Robert has mentioned here and here as being a player in the hunt for Covid-19 treatments.

And on Thursday, its shares popped some 15% in afterhours trading as the company revealed positive results in a clinical trial.

Of course, if its antiviral drug, remdesivir, is proven to successfully treat Covid-19 infections, it could be a golden goose for Gilead.

But it’s early days. The trials are not completed yet and won’t be for some weeks.

Still, investors leapt on it as though suddenly we have the cure in our hands.

And that big burst of optimism was another reason for the advance in the overall market at the end of last week.

It’s a sign of the febrile conditions the markets are in.

Not necessarily proof that the crisis is over and your investments are safe.

Let’s take one week at a time and tread carefully.