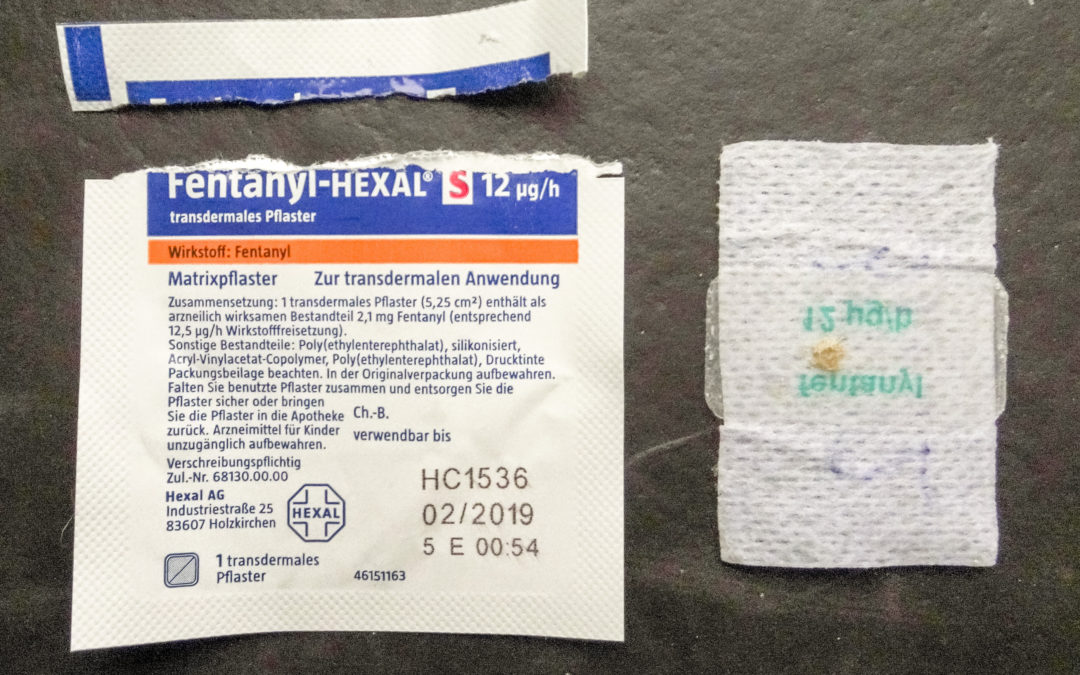 In the last ten years, many in Britain have fallen foul of a dangerous new addiction: opioids.

These painkillers – such as fentanyl and oxycotin – have become an increasingly important way to treat chronic pain.

The Lancet, one of the world’s leading medical journals, reports that opioid prescriptions rose by 127% in England between 1998 and 2016.

And that is quite worrying.

Because there is evidence to suggest that these painkillers are dangerous.

For one thing there are very, very powerful. Fentanyl is 50-100% more potent than heroin. So even a slight increase in the use can lead to overdose.

According to the Office of National Statistitcs, the number of Britons taken to hospital after overdosing on opioids has almost doubled in the past decade: there were 11,500 cases in 2017-18.

And there are nearly 2,000 fatalities a year from opiods.

And there are concerns about several cities that are seeing a spike in painkiller prescriptions.

Blackpool has the highest level of opioid prescribing in the country –  17,000 people a year, which is about 10% of its patient population.

A new way to treat addiction

How do we solve this crisis?

Obviously there are no easy solutions.

The evidence from the US opioid crisis is that prescription painkillers are most widely distributed in economically depressed areas.

So this is a deep rooted problem that is tangled with economic issues that won’t ever be resolved.

We could cut down on the prescription of opiods: and many UK doctors are beginning courses of de-prescribing, drastically reducing doses.

We could take drastic measures and ban extremely powerful painkillers altogether: although that doesn’t really help the many people who suffer from chronic pain and rely on these powerful opioids for quality of life.

There are already a series of drugs aimed at helping addicts wean themselves off powerful drugs.

They largely come in two forms: a less addictive replacement that allows a person to wean off the addictive drug, or a drug that dulls the high.

Naltrexone, for example, can dampen the dopamine release associated with drinking.

However, people tend to stop using it, because there’s no real incentive—Naltrexone doesn’t kill cravings.

Recently I’ve been following a company called Mind Medicine, which has just listed on the Canadian exchange, MMEDF (NEO)

Mind Medicince is the first among a string of companies who are developing addiction treatments from a very unlikely source: psychedelic drugs.

The company is preparing a Phase 2 clinical trial into the use of a compound to treat opioid addiction.

The compound is called 18-MC. It’s a non-hallucinogenic compound based on the psychedelic ibogaine.

Ibogaine is found in a woody West African shrub that sprouts orange fruits like upside-down tear drops. In Gabon and Cameroon, members of the Bwiti religion eat rootbark from the Iboga Tabernanthe bush as part of a ceremonial confirmation of their faith.

Ibogaine from rootbark can lead to intense visions and hallucinations that can last for days.

However 18-MC does not have hallucinatory or heart effects.

What it does is regulates the part of the brain involved in addictive behaviour.

Addictive drugs like alcohol or cocaine cause the brain to release a surge of the feel-good chemical dopamine.

Rather than attacking the dopamine system itself, 18-MC leverages a different set of neural pathways to indirectly modulate dopamine release.

Why treat a dangerous addiction with another drug?

But there are encouraging signs that this kind of compound has potential for treating chronic addiction.

In fact, a growing number of companies are conducting clinical trials of psychedelic treatments for everything from depression to post-traumatic stress disorder, and some have recently received the blessing of the U.S. Food and Drug Administration.

Take the story of Daniel Kreitmanm who recently took psilocybin in a trial at Johns Hopkins University School of Medicine for nicotine addiction.

He was 52 and he’d smoked between one and two packs a day for nearly 40 years. During his experience he saw lakes roads and mountains and a broad-shouldered man at the helm of a ship lassoing birds. He remembers giggling and feeling good. Music was playing in his headphones.

During Aaron Copland’s Appalachian Spring he had the sensation of physically touching the music which was smooth and bright yellow in his mind’s eye. As the music progressed he travelled flowing outward toward an immense space that never ended.

After his first psilocybin session his urge to smoke was gone.

During his third and final session he had a vision that helped him quit for good.

In another 10-person pilot study on alcoholics participants more than halved their alcohol intake six months after taking psilocybin.

And new studies on the therapeutic effects of psychedelics are being published by the week.

A UK study in The Lancet Psychiatry found that eight of 12 patients who participated in the trial were free of long-term depression after just one week of psilocybin treatment. Three months later only five were in full remission.

In fact these studies replicate the findings that were made by scientists since the 1950s.

Osmond who coined the term “psychedelic”—“mind manifesting” in his words—wanted to help alcoholics quit drinking.

He recognised that when long-time drinkers stop they can suffer from a severe and occasionally deadly form of withdrawal called delirium tremens which can include psychotic episodes.

By treating these patients with LSD Osmond thought they might learn how to handle these episodes and finally break the cycle of addiction.

And the results were very impressive.

Up to 40 and 45% of his patients continued to abstain a year after treatment.

The evidence is that these treatments can train a patient to ignore the compulsions that drive addiction anxiety and depression.

How? In truth there is not a lot of clarity on how psychedelic therapy works.

When you take psilocybin your body metabolises it into psilocin the active compound in the hallucinogen. This stimulates serotonin receptors on your neurons exciting those cells and prompting a cascade of neural activity.

Scientists at the University of Zurich have found that activity in the amygdala the fear center of the brain declines on psilocybin making people less reactive to negative stimuli which might explain how it could help with depression.

According to scientists at Imperial College London it seems that connectivity within neural networks responsible for weaving information into a coherent whole also declines; but connectivity between networks usually specialised in different tasks increases.

What that implies is both a kind of disorder – the kaleidoscopic colours and sensation of dreaming while awake – and a kind of freedom which the researchers call “ego dissolution.” 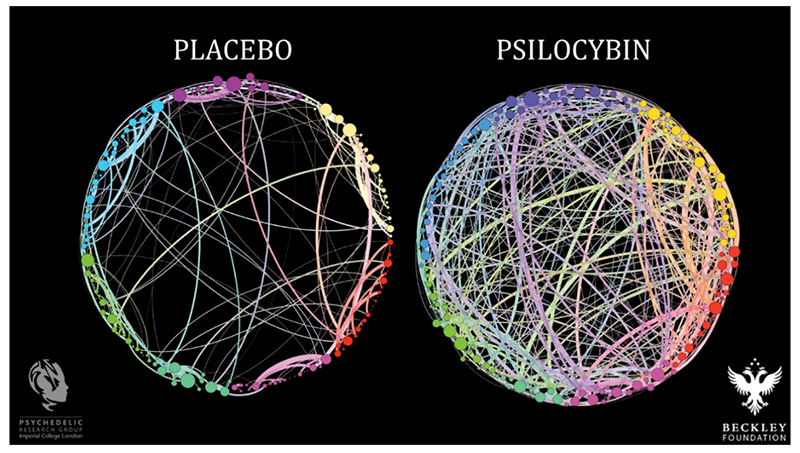 The image above, produced as part of a collaboration between the UK think tank the Beckley Foundation and Imperial College London, depicts increased interconnectivity of the brain under a high dose of psilocybin compared with a placebo, measured via functional magnetic resonance imaging (fMRI).

Under psilocybin, a brain network called the default mode network (DMN), which is a fundamental component of the neural basis of the ego, is relaxed and deactivated ­– which enables an increase in brain communication, and temporarily creates a more unified and interconnected brain.

How do you profit from psychedelic-assisted treatments?

As I said, Mind Medicine has just listed on the NEO exchange in Canada.

It is targeting a big market: opioid addicts.

The company is also preparing for a phase II clinical trial of micro-doses of LSD (with no hallucinogenic effect) to treat ADHD.

It’s one to watch.

Berlin-based biotech ATAI Life Sciences is the largest company in this field at the moment.

ATAI owns Perception Neuroscience a company developing therapies for neuropsychiatric diseases (e.g. eating disorders) and is the largest stakeholder in Compass Pathways a firm looking at psilocybin-based therapy for depression.

The company has made enough of the active ingredient in magic mushrooms to test on 20000 people.

How is this new market different to cannabis?

It also sets the industry apart from cannabis, which has seen stock prices collapse amid slower-than-expected sales in Canada and ongoing federal illegality in the U.S.

This won’t be explosive. Though the FDA has cleared a path for psychedelic drug development, the laws around these drugs haven’t changed.

Psilocybin, MDMA, LSD, ibogaine, and marijuana are among the most controlled substances in the United States and are illegal to possess.

All of the current programs involving psychedelics must be taken at a medical office and not at home. This is done in part so a physician can monitor the patient in the two hours post-treatment while they grow dizzy or enter a dreamlike state.

It’s also to curb potential abuse. Such conditions could ultimately limit who has access to these drugs.

Even still, there is an urgent need to treat the problem of addiction, particularly prescription opioid, which is estimated to cost the United States $78.5 billion annually.

I’ll come back to the COVID-19 crisis in the coming weeks, but thought this was worth bringing to your attention.