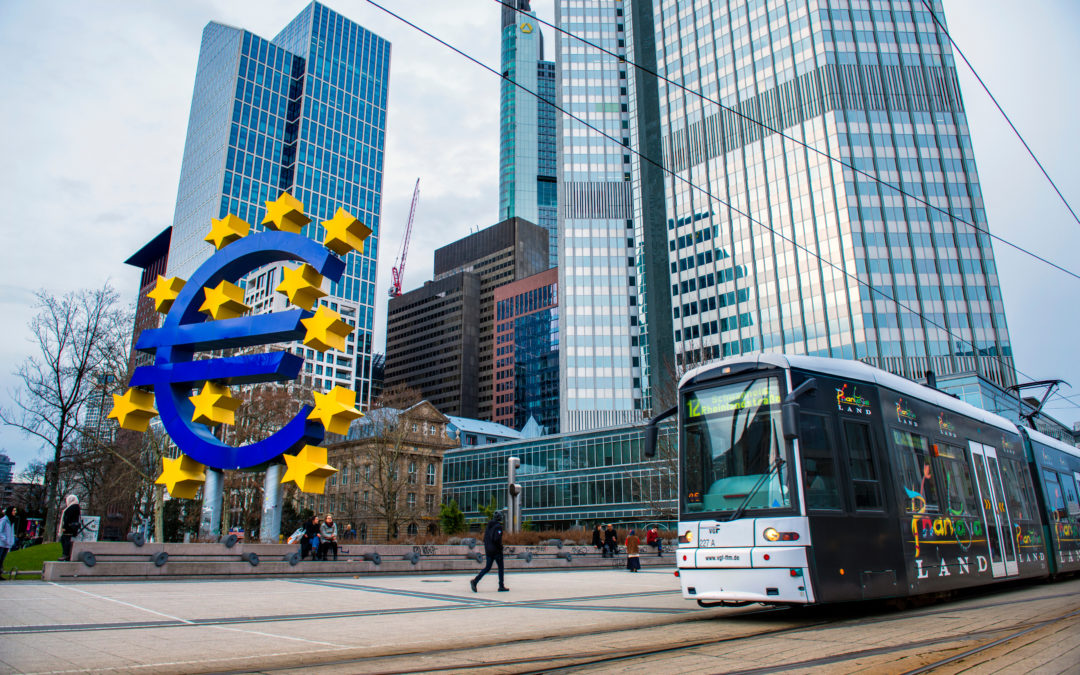 As we’ve seen in Monkey Darts, central banks around the world are slashing interest rates.

But rather than saving the financial world, it could make things worse.

Look at the US Fed, the most powerful bank in the world.

In December last year, it was mapping out a plan to return rates to normal, with up to four hikes in 2019.

But each time it talked about moving rates up, two things happened.

In the end, and faced with worsening economic data (and Trump’s gun pointed at Powell’s head), the Fed caved in.

Instead of raising rates, by March it started talking about pausing its hiking programme…

And eventually, in July, it pulled an emergency policy U-turn and cut the base rate by 25 basis points.

And then another 25 in September, suggesting, reports the New York Times, that “it was prepared to move aggressively if the United States economy showed additional signs of weakening.”

Well, chances are, the Fed won’t stop there.

Not just in the US. It’s a global problem.

And global trade is sluggish and under threat from the ongoing trade war between the US and China.

“Global growth is set to fall to its slowest rate since the financial crisis this year, the IMF said on Tuesday, as it warned that the self-inflicted wounds of the US and China’s trade war had created a “precarious” economic situation.

So, the money is on the Fed cutting rates again at the end of this month, probably 25 basis points.

It’s not just the Fed.

The European Central Bank are well ahead of the game.

While the Fed’s rate cutting has taken the cost of borrowing down to the 1.75 to 2 percent range, the ECB’s rate is already at -0.5%.

And it could go even lower, according to Mario Draghi, who yesterday delivered his final policy meeting before passing the buck to new ECB boss, Christine Lagarde.

The Guardian reports that Europe’s largest economy, Germany, is “on the brink of recession”.

And the whole Eurozone bloc is under threat.

The Guardian continues: “Draghi said the ECB was concerned that the economy of the 19-member currency bloc, which has slowed this year along with much of the global economy, faced “protracted weakness” going into 2020.”

The ECB’s solution to try to keep the economy going has been to cut rates all the way to zero… and below.

With inflation forecast at just 1% for 2020, it’s some way below the ECB’s mandate target of close to 2%.

So, it needs to induce banks to lend more money, which in turn will promote business and help the economy.

Reuters explains how it does this with negative rates:

“Under a negative rate policy, financial institutions are required to pay interest for parking excess reserves with the central bank. That is, any surplus cash beyond that which regulators say banks must keep on hand. That way, central banks penalise financial institutions for holding on to cash in the hope of prompting them to boost lending to businesses and consumers.”

The ECB has had negative rates since 2014 and it lowered them more in September.

Draghi leaves his job insisting that the policy is the right one to follow until growth and inflation pick up.

Here’s how he put it yesterday:

“A cross-check of the outcome of the economic analysis with the signals coming from the monetary analysis confirmed that an ample degree of monetary accommodation is still necessary.”

As for the Fed, whilst they’re not in negative rate territory yet… it’s early days.

Donald Trump wants rates at zero – and lower if he gets his way.

In fact, he labelled the people at the Fed “boneheads” for not resorting to negative rates.

He sees it as his ticket to a booming economy, booming markets… and a second term in The White House.

Jerome Powell is standing tough on this. He says it’s unlikely the Fed will make rates negative.

He’ll be under pressure from Trump.

And even if rates don’t go negative, they are likely to head lower towards zero.

If the Fed lowers rates towards zero, international capital will be sucked out of the US.

That should weaken the dollar… and make US exports more competitive, which is good for the economy. (And for the market… and for Trump’s chances of re-election, etc.)

It’s what the whole world is up to… this race to the bottom in interest rates.

The aim is to save the world economy and prop up markets.

But it’s creating a huge problem for another day… one that will come back and haunt central bankers.

With lower rates, investors and companies have been forced into riskier investments in their search for yield.

And at the same time, debt has been spiralling out of control.

“The IMF and other economic policymakers have expressed concern over high levels of risky corporate debt in the past. But the group said Wednesday that attempts by central banks worldwide to lower interest rates to combat immediate economic risks have exacerbated the situation, leading to “worrisome” levels of debt with poor credit quality and increasing financial vulnerabilities over the medium term.”

In it, it warns that 40% of all major economy corporate debt could be “at risk” in another global downturn.

In a weak global economy, over-extended companies would likely be unable to repay the interest on their huge debts from their dwindling earnings.

That could lead to bankruptcies, job losses and serious knock-on effects in the wider economy.

And at the same time, negative rates are not good for the banking sector which allows economies to function.

When rates are low – or negative – it slashes the margins banks make on lending. That removes the incentive to lend.

And if banks stop lending, it could be catastrophic for the economy.

I won’t be surprised if the Dow Jones makes another attempt at pushing through all-time highs if the Fed cuts rates next Wednesday.

But further out, it’s a more worrying development.

It could be that the Fed and other central banks’ move towards zero rates and lower will ultimately weaken the global economy and crash the stock market.