Biology is Eating the World

This week I read a report about a disturbing new project by the Chinese police.

It seems that for the last three years, Chinese police have been engaged in a massive project to collect blood samples from thousands of men and boys in cities across the country.

They have been going door to door… showing up at schools… and even stopping people in the street to draw blood and collect samples.

One individual who tried to resist was told that “if blood wasn’t collected, your family will be listed as a ‘black household,’” and that he would be deprived of benefits like the right to travel and or go to hospital.

The goal, according to the New York Times, is to build a national genetic database of the country’s 700 million males.

When the project is finished, the state estimates that they will be able to track down any man or boy’s male relatives with a simple trace of DNA.

Why would they need this? According to the report:

“The impetus for the campaign can be traced back to a crime spree in the northern Chinese region of Inner Mongolia.

For nearly three decades, the police there investigated the rapes and murders of 11 women and girls, one as young as 8. They collected 230,000 fingerprints and sifted through more than 100,000 DNA samples. They offered a $28,000 reward.

Then, in 2016, they arrested a man on unrelated bribery charges….and after analyzing his genes, they found he was related to a person who had left his DNA at the site of the 2005 killing of one of the women. That person, Gao Chengyong, confessed to the crimes and was later executed.

Mr. Gao’s capture spurred the state media to call for the creation of a national database of male DNA.”

And the Chinese are not alone in this.

Most countries have been building DNA databases for years.

Crime is the main justification: DNA profiling has become a vital part of forensic evidence.

Today, investigators can retrieve DNA profiles from skin cells left behind when a criminal merely touches a surface.

And they can then check this data against a national database of DNA collected on those charged with serious, and sometimes very trivial crimes.

Our own National DNA Database (NDNAD) has grown to include DNA samples from 5.8 million individuals (as of 2016).

Decoding a Population: the case of Iceland

Outside of crime, however, there are very good reasons for collecting a database like this.

Iceland’s extensive research programme on genomics has shown that DNA databases have enormous potential for good.

Over the last two decades, the “deCODE” project has sequenced the full genomes of thousands of Icelanders, and used them to investigate the genetic basis of diseases such as Alzheimers.

The refrigerated storage rooms at deCODE hold blood samples from a hundred and eighty thousand Icelanders—roughly one of every two people in the country.

And this has proved very useful during the pandemic.

By testing people who had no symptoms, or only very mild ones, deCODE picked up a huge number of cases very early in the crisis: by May, Iceland had tested 15.5% of its population for the virus.

deCODE also sequenced the virus from every Icelander whose test had come back positive – helping to accelerate a test and trace system.

In fact, all this genetic information is very valuable.

DNA is becoming the basis for a huge emerging industry.

deCODE for example, was bought up by US biotech Amgen during the financial crisis.

And elsewhere, big pharma companies have been racing to build databases of their own.

Perhaps the most notable example was the $300 million deal between pharmaceutical giant GlaxoSmithKline with 23andMe in 2018.

But there have been many others. Below is a table that outlines many of these types of deals that have taken place over the past several years. 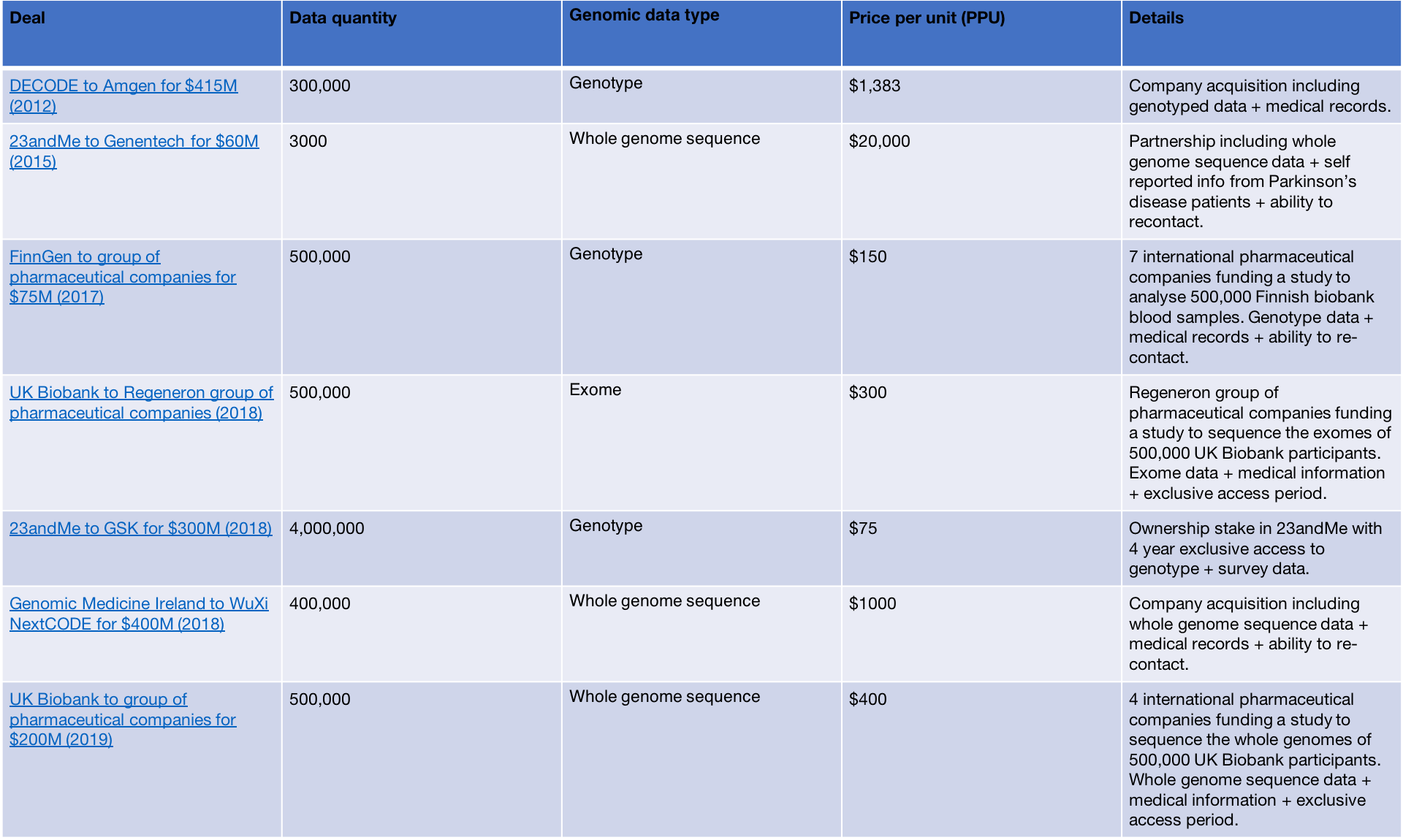 There is also a growing business in personal microbiome profiling with companies such as DayTwo and uBiome offering equivalent services to 23andMe and AncestryDNA in the ‘second genome’ field.

China will lead this drive

However it seems that China is taking a lead in this drive to collect DNA.

BGI Genomics has access to the world’s biggest human genome base of 1.3 billion mainland Chinese, and is less constrained than its Western counterparts over ethical and regulatory issues in genomic research.

It is already running a global project to unveil the genetic basis exceptional cognitive abilities with many western academics and members of such groups as Mensa taking part unwittingly.

Or take iCarbonX, who have been involved in a huge project to collect biological data from the Chinese population.

CEO Jun Wang calls this ‘lifetime data’ and the publicly stated mission is to use this information to allow continuous monitoring of our health – making daily suggestions on how you might improve your diet and behavior before you slip from being healthy into the early stages of an illness.

These companies are driven by their need to collect genetic information on the population: whether it be our DNA, or the DNA of crops, cows and members of the coronavirus family.

The way they see it, ten years from now, many of the companies that will dominate the global economy will be those that can read, copy, store, and write the ‘life code’ — the adenine, thymine, cytosine, guanine of DNA.

This is belief is driven by a number of factors:

In the end, every living thing, whether virus, crop or human, is genetically loaded and can now be profiled, tested and reprogrammed, ushering in the age of ‘unnatural selection’ in so far as biology allows.

I’ll follow the progress of these companies in Monkey Darts.

But to find more about this “bioeconomy”, I recommend this excellent summary by Andreesen Horowitz…

Biology is Eating the World