Conditions are ripe for an ‘explosive’ move higher in gold 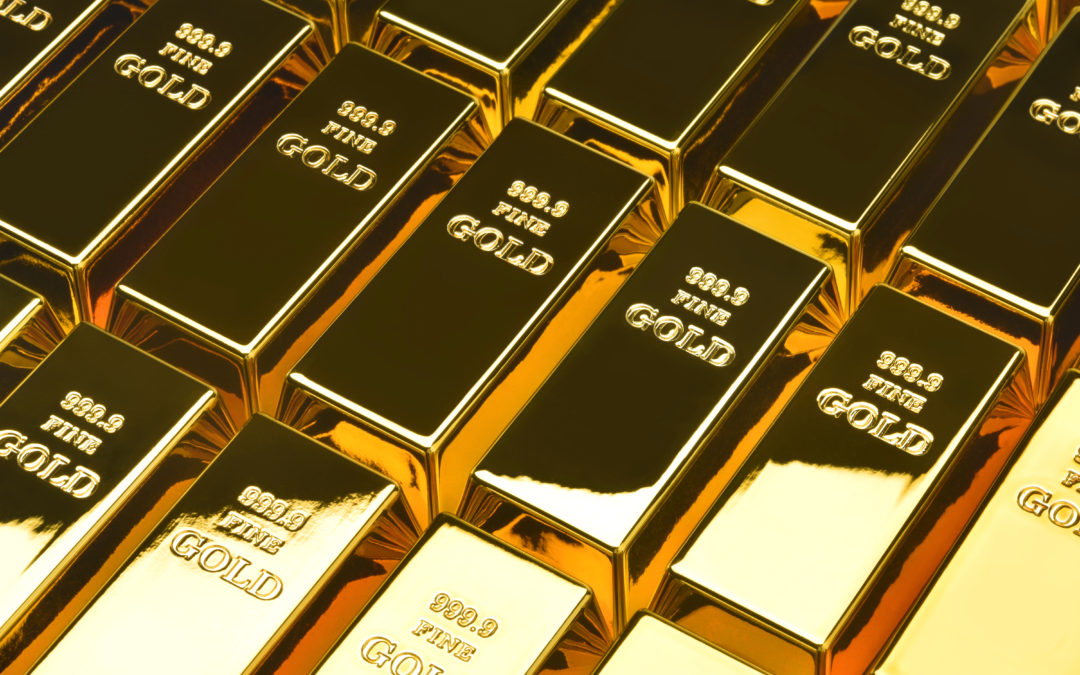 Conditions are ripe for an ‘explosive’ move higher in the gold price.

One that will make recent highs at $1,550 look like a bargain.

And the state of the world right now means gold is an important asset to own.

We’ll look at why that is today.

But first, we need to talk about oil.

It can help us understand what’s going on in the gold market right now… and where it could lead.

Lessons from the oil market

In a scientific paper he wrote in 1956, M. King Hubbert, a geophysicist at the Shell oil company, made a shocking prediction.

He said US oil output would peak in 1970… and then decline.

“[Oil production increases] exponentially during the early stages of production before eventually slowing, reaching a peak when approximately half of a field had been extracted, and then going into terminal production decline.”

Of course, if Hubbert was right, it would have grave implications for the world and for investors in the 1970s.

It would lead to soaring energy prices, which would in turn hit economic growth, crush corporate profits and cause a stock market meltdown and potentially even a depression.

As it turned out, Hubbert’s predictions on production were pretty accurate, as Rapier confirms:

“Oil production in the U.S. from 1900 through 2010 did approximate a bell curve, with peak production occurring in 1970. I documented this production curve in my book Power Plays: Energy Options In The Age Of Peak Oil: 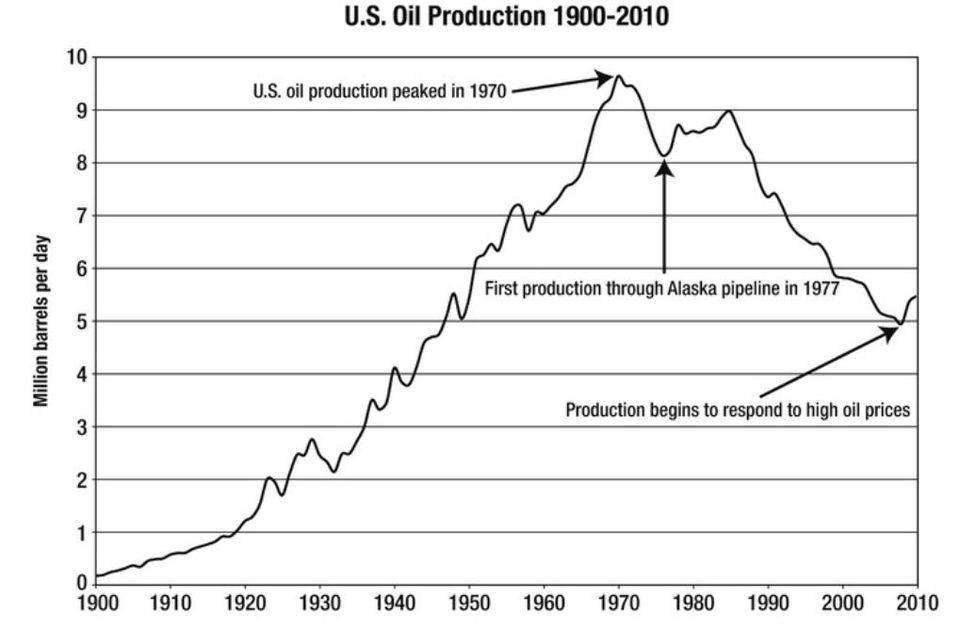 It gained him legendary status in the energy sector. And by extension, in the world of money and markets.

Most long-time investors will know the phrases ‘Hubbert’s peak’ and ‘Peak Oil’.

Those phrases got another resurgence in popularity at the turn of the millennium.

That’s because back in 1956, at the same time Hubbert made his prediction for peak US production in 1970, he also called for a global peak around the year 2000.

In 2001, Kenneth Deffeyes, an associate of Hubbert’s at Shell, published a book, Hubbert’s Peak: The Impending World Oil Shortage.

Again, this turned out to be accurate, to a degree at least.

But what didn’t happen is the subsequent huge shortage of oil and soaring prices that many were predicting after the peak.

That’s because, beginning in 2008, there was a huge and unexpected boom in unconventional oil production.

And oil would likely be nearer $175 a barrel rather than the $54 it’s trading at today.

My bet is that if that was the case, the stock market would NOT be approaching all-time highs as it is right now.

Global economic growth would be slowing faster than it is now – maybe even contracting already.

And what happens when the shale oil runs out?

This from the Wall Street Journal:

“The American shale boom is slowing as innovation plateaus—and just when shale’s importance in global markets has reached new highs following an attack on the heart of Saudi Arabia’s oil infrastructure.”

I’m guessing the oil price would be in triple figures. And M. King Hubbert’s name and ‘Peak Oil’ would be back in the news.

But it’s unlikely to happen for a while.

If they’re right, even disruptions like the recent attacks on the world’s largest oil exporter, Saudi Arabia, shouldn’t affect the market too much.

For now, the oil market is ‘protected’ by shale production, which accounts for 10% of world-wide oil, according to the Wall Street Journal.

It ensures there’s enough supply. And it keeps a lid on the price.

That’s good news for the world economy and for the stock market.

But let’s talk about gold.

But that’s unlikely to continue, despite the great run gold has had so far in 2019.

And that tough bear market made gold companies pull in their horns and stop investing in exploration.

“While the resurgent gold price has garnered a renewed sense of optimism in the industry, it has also shone a light on a structural issue that has been brewing for some time.

“Exploration budgets were slashed following the fall in gold price from the highs in 2011 and 2012 and they have since failed to recover.

“The slight rebound in the past couple of years has not been sufficient to replenish mined ounces and, as such, peak gold supply is now a very real possibility.”

They’re running out of reserves and costs of mining are going up.

Where’s the gold coming from?

According to Richard Mills writing in SafeHaven.com…

“It’s causing an “existential crisis” for the gold mining industry, as executives at gold producers like Barrick, Newmont Goldcorp, Randgold, AngloGold Ashanti, Newcrest and Kinross, puzzle over how to replace their depleted reserves, where new gold will come from, and how they will deal with the rising costs of extraction.”

Standard and Poor’s wrote a report in 2018 that revealed 20 major gold producers had slashed their projected remaining years of production from 20 to 15.

And it’s not just about their falling gold reserves.

It’s also to do with the quality of gold grades in their mines.

The S&P report found that gold grades have been declining since 2012.

In other words, more ore had to be processed to get the gold. Of course, that increases costs.

Another major problem is that they just can’t find the stuff like they used to.

“Supply is indeed shrinking. The “low-hanging fruit” has likely already been mined, and it’s become prohibitively expensive for many companies to look for large-scale deposits, to say nothing of developing them.”

Global consultancy firm, McKinsey, says that during the 1970s, ‘80s and ‘90s, at least one 50+million-ounce gold deposits and ten 30+million-ounce deposits were discovered.

That’s in each of those decades.

But since 2000, says Richard Mills on SafeHaven.com, “no deposits of that size have been found and very few 15 Moz deposits.”

Mining companies don’t know where they’ll find new deposits of gold that they can extract at a cost that makes sense.

This is what’s meant by ‘Peak Gold’.

Mining production has stopped growing because existing mines are getting depleted without new deposits to replace them.

Without new deposits, these companies will die.

It’s why there have been signs of consolidation in the sector.

Before that, Newmont had gobbled up Canada’s Goldcorp for $10bn.

And in September last year, Barrick merged with London-listed, Africa-focused RandGold in an $18bn deal to create the world’s largest gold mining company.

But they can consolidate all they want.

There’s still a shortage of gold they can bring to the market.

And unlike in the oil industry, there is no magic solution, no great salvation, like shale oil, to protect the mining industry.

The fact is, there is not enough gold to meet the growing demand.

Because keep in mind that this threat of falling production comes as global recession fears are building… and smart investors and central banks are buying gold as a safe haven.

According to Adrian Ash at BullionVault, central banks as a group have been net buyers of gold since 2010.

European central banks have reduced their sales of gold. And at the same time, China, Russia, India and other emerging market banks have been buying.

The FT expands on the story:

“Central banks purchased a record $15.7bn of gold in the first six months of the year in an effort to diversify their reserves away from the US dollar as global trade tensions continue to simmer.

“Data released by the World Gold Council showed central banks, led by Poland, China and Russia, bought 374 tonnes of gold — the largest acquisition of the precious metal on record by public institutions in the first half of a year. Central banks accounted for nearly one-sixth of total gold demand in the period.”

So, why are they buying?

Security in a dangerous world

For the same reasons smart investors are buying gold: security.

Around the world, central banks are cutting interest rates to devalue their currencies against the currencies of other nations.

The US Fed has been cutting rates and plans to reduce them further towards zero.

And the European Central Bank already has negative interest rates of -0.5% and has announced it’s restarting its quantitative easing next month.

Even the Reserve Bank of New Zealand joined the ‘race to the bottom’ in August by slashing interest rates by 50 basis points.

They want investors to pull capital out and put it elsewhere, driving their own currency down.

If it gets out of hand, we’re looking at a full-blown currency war… on top of the trade war that’s already raging.

And that’s why central banks are buying gold… and could buy a lot more.

“While the gold tonnage demand from central banks in recent months has been significant and near records, gold remains a tiny fraction of most central banks’ foreign-exchange reserves.”

Therefore, he says, the trend is “sustainable and indeed may accelerate.”

Dalio wrote recently of a major shift that makes it important that gold is part of everyone’s portfolio.

“The hedge fund luminary muses on monetary policy and the markets over the past 50 years and concludes that a raft of central bank money printing and a Federal Reserve joining a march toward a new zero-bound interest rates — and in many cases negative rates in European sovereign debt — are tantamount to a global “paradigm shift”.

“The upshot of Dalio’s prolix “Paradigm Shifts” post: “For this reason, I believe that it would be both risk-reducing and return-enhancing to consider adding gold to one’s portfolio.”

Another big-name investor, Paul Tudor Jones, told Bloomberg: “I think one of the best trades is gonna be gold. If I had to pick my favourite [bet] for the next 12 to 24 months, it’d probably be gold.”

“This is going to be an explosive gold market. The world is in uncharted waters right now. We’re living in a world with a global debt bubble, and any time you get debt bubbles of this magnitude that are global, that are fuelled by speculation, something’s going to happen.”

That ‘something’, he forecasts, is gold taking out its all-time highs at $1,920 an ounce.

So, we have trade wars, currency wars, the rising threat of a US and global recession and plenty of political turmoil around the world…

All supportive of higher demand for gold… we’ve already seen that in the way central banks have been loading up on gold.

And this is all at a time when new-to-market gold is already in short supply.

It’s a recipe for far higher gold prices in the years ahead – whilst stock markets are looking dangerously overpriced.

If gold does take out its all-time high at $1,920, that could be just the start of the next leg higher in a phenomenal bull market.