Could Trump’s fight with the world’s largest telecom giant crash the market? 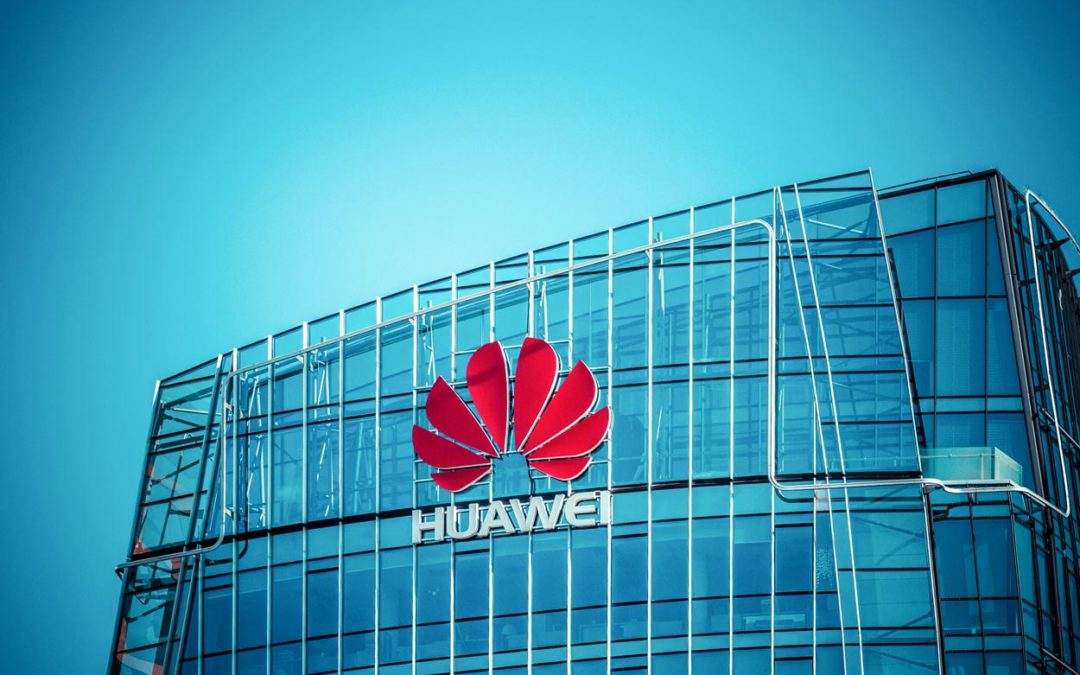 On 1st December 2018, Meng Wanzhou, Chief Financial Officer of Chinese tech giant, Huawei, was all set to board a plane at Vancouver International Airport.

She was travelling from Hong Kong on a business trip to Mexico City. And then on to Costa Rica, Argentina and France.

But as she approached the boarding gate, she was hustled aside by border officers.

After searching and questioning her and accessing her electronic devices, they handed her over to uniformed Mounties who arrested her.

Meng hadn’t done anything wrong in Canada. She was only stopping over in Vancouver to change planes.

Her arrest came at the request of US authorities

Huawei had allegedly violated US sanctions against Iran by selling technology to the country.

That was the story then.

But there’s more to it than that, of course.

This is another part in the US-China crisis.

According to CNN, in China many viewed Men’s arrest as “a political move by the Trump administration to gain leverage in the clash between the two countries over trade and technology.”

Trump is hell-bent on keeping Huawei’s tech out of American telecommunications.

He’s convinced that Huawei is in cahoots with the Chinese government and that they are spying on US business and stealing trade secrets.

This from a TechCrunch report in February:

“A grand jury in Seattle has charged Huawei with conspiracy to steal trade secrets, attempted theft of trade secrets, seven counts of wire fraud and one count of obstruction of justice for the company’s alleged attempts to move potential witnesses back to China.”

But it’s not just about Huawei.

And if it gets out of hand, things could turn very nasty, very quickly.

Maybe it could end up sparking war.

Calling in the lawyers

Meng is still in Canada, pending extradition to the US.

She’s furious about it and this week filed a lawsuit against Canadian authorities.

CNN reports the lawsuit as “alleging serious breaches of her constitutional rights and seeking damages for misfeasance in public office and false imprisonment”.

Meanwhile, yesterday came the news that Huawei is suing the US government.

Wired has the story:

“Huawei has taken legal action against the US government with a suit claiming that Section 889 of the National Defense Authorization Act, which bans federal agencies from using Huawei’s hardware or services, is unconstitutional (TechCrunch).”

Huawei denies the accusations of espionage, according to Wired.

It’s not surprising that Huawei is acting like this.

Trump’s ban on using Huawei’s network equipment has basically shut down its sales in the US.

It must be costing the company hundreds of millions of dollars.

Whether it will succeed in overturning the ban remains to be seen.

But from where Trump’s sitting, the whole situation is part of the ongoing trade negotiations the US is having with China.

“President Donald Trump on Friday suggested that criminal charges against Chinese telecom giant Huawei and one of its top executives could be used as a bargaining chip in his administration’s ongoing trade negotiations with China.”

Sure, there’s been plenty of propaganda from Trump and his team that there’s a resolution coming.

He’s taken to Twitter himself to get that message out to the world (and to investors, who he desperately needs to keep on buying the market.)

Here’s a couple of Trump tweets from last week, telling us everything’s OK: 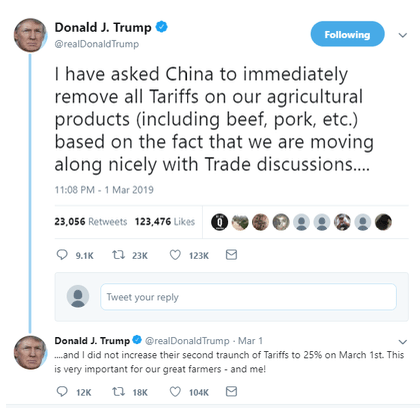 And apparently there’s a meeting set to take place later in March between Trump and Xi at Trump’s Mar-a-Lago pad to sign a deal.

That’s what’s been sent out on the newswires.

Haven’t we seen this stuff before… these tricks to keep investors onside?

I just wonder though, is this approach starting to wear thin?

Certainly, the market has been a little indecisive this week.

Investors haven’t been quite so upbeat as they were in the last couple of weeks of Feb… when it looked like the market would have a crack at the all-time highs.

Perhaps things aren’t going quite as well as Mr Trump would have us believe… and that there’s no resolution in sight at all.

And maybe investors are starting to figure that out.

Or at least to question it… and to be a little less complacent as a result.

You can bet that there will be… Trump will make sure of that, whatever it takes. His PR machine will crank up if need be to keep the market going.

From trade war to shooting war?

But here’s what caught my eye earlier this week.

What if the tension keeps on building and building so that it’s no longer just a trade war we’re dealing with… but a real war.

That’s an idea I saw in an email from veteran US commentator and expert in “crisis investing”, Doug Casey.

I’ve read his stuff for years. And although some of his ideas sound far-fetched at first… he’s often on the money.

“When tensions build between states they eventually fight with each other. China is the major rising power. It’s got four times the U.S. population, it’s soon going to be more economically powerful, and it’s going to reach military parity. It’s also of a different culture than the U.S.

“The U.S. government may figure it’s best to take China out while the balance is still in America’s favor. It’s like the situation with the USSR in the 1980s. The Kremlin could see the country was in decline, and some Soviet generals figured it was “now or never” for a successful war. Fortunately, the Soviet Union collapsed first.

“The Chinese came from nothing; only 40 years ago, they had nothing but a billion impoverished peasants. No money. No technology. No power. Today, they’re on par with the U.S. But if this trend continues – which it will – their economy will be triple the size of the U.S. economy in 20 years.

“The U.S. military thinks a shooting war is inevitable. And it probably is. Five thousand years of history teaches us it’s better to start a war when you’re more powerful than your enemy rather than wait until they’re more powerful than you. It’s always been this way. The Golden Rule of statecraft is: Do unto others – but do it first. It’s a very dangerous situation…”

So, what could spark off such a conflict?

I’m not suggesting that the spat going on right now between the US and Huawei, the world’s largest telecoms company, will be the trigger…

Although, if things escalate and the Chinese government starts throwing its weight around to defend its interests, you never know where that could lead.

“The U.S. may do something stupid, like fabricate an incident, and launch a preemptive strike against China. Or perhaps things just get out of control, as they did in World War I.

“It would make about as much sense as the Peloponnesian War, or World War I. But these things can take on a life of their own.”

Maybe it sounds that way.

And maybe Trump has it right… that he and President Xi ARE about to sign a truce that will make all this tension ebb away.

But if there’s one thing we know about Trump it’s that he wants this HIS way. And he’s not about to roll over and submit.

There could be a lot more to come from this situation.

If it goes the wrong way, there could be a lot more trouble ahead for stock markets…

And a lot of upside for gold and other crisis-friendly investments.