Has the Bitcoin bubble burst?

I’ve heard it suggested a few times in the past couple of weeks.

That’s both from people I know and wise guys in the media.

“The Bitcoin Bubble is Bursting—down 25% in One Day”

And like James Sym, a fund manager at Schroders:

“I was not around to watch the tech bubble burst. Well now I have the chance to see it with bitcoin…”

Sym said it – and reading around, plenty more are thinking it…

This is good news for Bitcoin

It’s healthy for the market…

It’s even a positive sign for where Bitcoin is heading next.

And anyway, we really shouldn’t be thinking about this just in terms of Bitcoin – there is far more to this crypto story than that. (As you’ll know if you’ve been following Finn’s work at the Crypto Traders’ Academy.)

We’ll get to all that in a minute.

But I suppose it’s not surprising people started talking about bursting bubbles… after the bloodletting that took place just before Christmas.

You may recall, Bitcoin had a remarkable super-spike in the last few weeks of 2017.

But it went nuts at the end…

That’s two and a half times your money in 30 days.

Not after it had already increased sevenfold in the previous 11 months!

So it’s not surprising that when the correction came, so did the exclamations of “Bitcoin bubble bursts!”

That’s a significant price crash whichever way you look at it.

This crash is exactly what Bitcoin needed

It’s just a bit of bloodletting.

See, when a market moves so far, so fast, it feels a little out of control.

So to ‘let some blood’ is healthy.

It relieves the pressure and stabilizes the market.

And it shakes out some of the weaker holders, leaving the more committed players in.

It’s used to describe the idea that investors jump into a hot market because they don’t want to be the only people not getting rich from it.

The fear of missing out.

And when you get a lot of people that feel that way… and acting on it… well that adds froth to the market.

That’s not what I’m saying.

It’s being driven by larger players, speculators that truly believe Bitcoin is going to go a lot higher.

Here’s what could have caused the Bitcoin correction

As Bitcoin kept hitting new highs, triggering headlines in the news, more people jumped on board.
And then as we approached the end of the year, a bunch of people started taking money off the table.

Banking some profits, rather than having too much exposure over the Christmas break.

And as that happened, the newer FOMO buyers got spooked and bailed out… adding to the downward pressure.

This is not uncommon in markets.

In fact, it’s quite normal. And quite healthy.

But what’s important is that Bitcoin seems to have found a support level or floor for now.

Look at this chart: 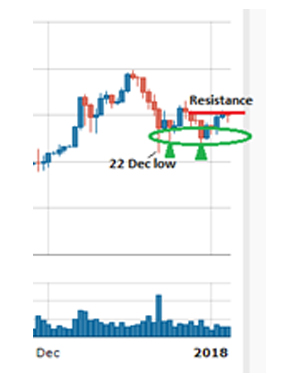 After that, the price moved higher initially.

But look at the area I’ve circled in green.

It’s a good sign that as the price comes down to that area, buyers come in and support the price.

That’s what I mean by a support level.

And if it can hold above that resistance level I’ve marked in red around $15,000 (which it started doing today!), we could get another attempt to get back to the all-time highs near $20,000.

Let’s see how it plays out for the rest of today and over the weekend.

But as far as I’m concerned, the crypto bubble (including Bitcoin) is still very much alive…

We needed this correction – but there should be plenty of upside to come.

And as I mentioned earlier, it’s important to be aware that this is not just about Bitcoin.

It’s also about the technological breakthrough called blockchain and all the other cryptocurrencies or altcoins that are building on the concept.

Bitcoin started out as a decentralised, peer-to-peer electronic cash system.

A way to make payments without using the banks.

That was and is the idea.

And there’s nothing to suggest that it won’t get there.

But there are far greater possibilities.

It’s likely that over the coming years blockchain technology will change the way we do things. In almost every aspect of our lives.

And that’s where the rest of the cryptos come in.

From casinos… to shipping… to legal pot

In gambling and casinos… in global shipping and logistics… in cloud storage and security… in government and central banking… in charities… even in servicing the legal marijuana industry we’ve been looking at lately.

Anywhere you can think of that needs a way to record and transfer data that is transparent, secure, auditable, and resistant to manipulation.

Bitcoin may have been the first and is the best known crypto – but there are many more.

The one that’s been grabbing headlines so far in 2018 is called Ripple.

It’s basically another digital payment system which “enables banks to settle cross-border payments in real time, with end-to-end transparency, and at lower costs.”

But there are plenty more cryptos – 1,381 according to Wikipedia.

In 2017, it was Bitcoin that grabbed most of the headlines (good and bad).

It could well be that 2018 is all about the new players in the crypto space.

The skill will be in picking the ones that have great technology, great vision, great managers and developers and the potential to make you great returns…

And avoiding the many that will turn out to be duds.

If you’re new to all this, and looking to get started, take a look at the Crypto Kickstart Programme.

It’s run by our top crypto expert and will show you all you need to know to get a leg up in the cryptocurrency markets.

And if you’re itching to put some money to work, you’ll love his #1 crypto profit pick for 2018.

According to Finn’s analysis, if everything falls into place on this one, it could make you 5x, 10x, even 100x your money in the months ahead.

Find out what it is here.