Find out the four best cryptocurrencies to buy now 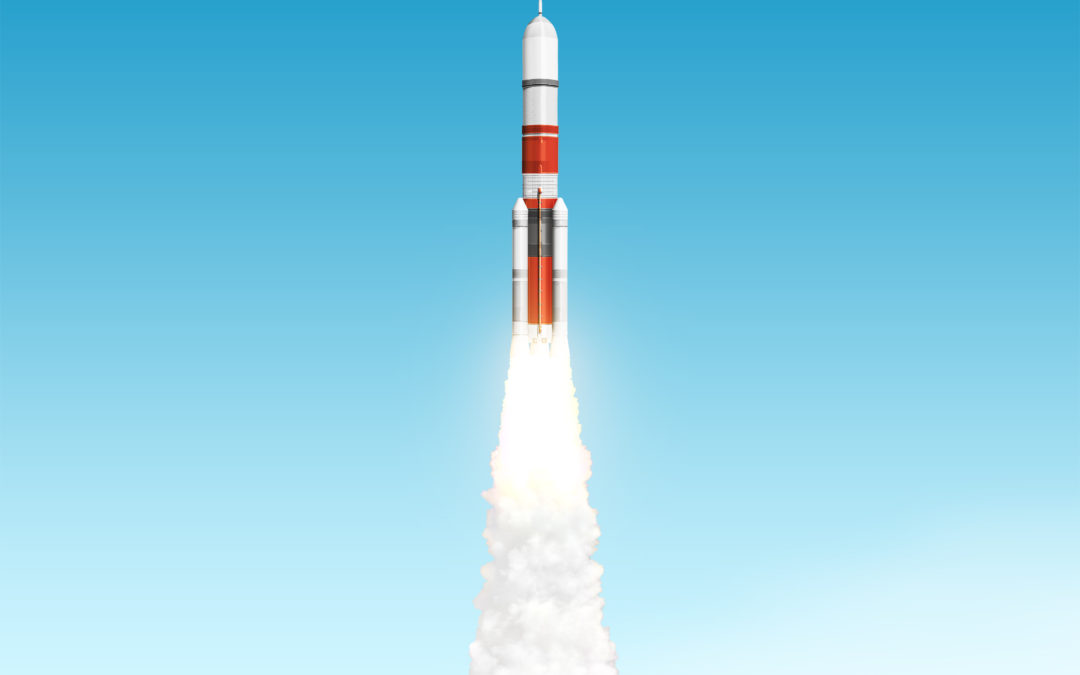 Something big has changed in the world of cryptocurrencies.

… and the sheer size of the investment opportunity it brings.

The crypto winter is over

As you know, it now looks like the bear market in cryptocurrencies is over.

And importantly, it’s broken through a key price level that says the primary trend in Bitcoin is now UP.

You can see that on this chart that Michael Mac at the Crypto Traders’ Academy shared with members of his private group back in April. 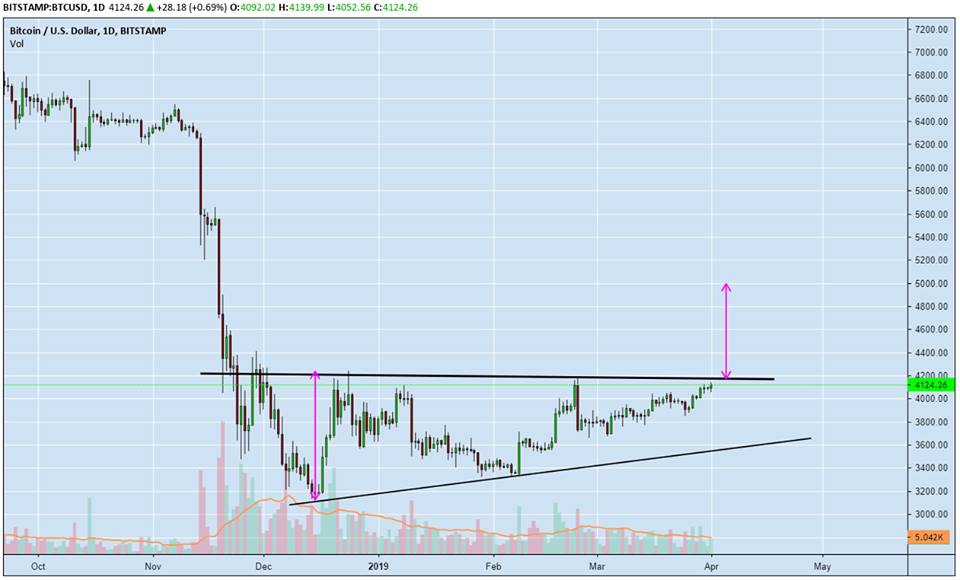 Here’s what Michael said at the time:

“Recent weeks have seen strong gains in most cryptocurrencies from their all time lows. There is a very good chance that Bitcoin and Ethereum are in an accumulation zone after having bottomed out and we could have seen the bottom of the bear market already. Return to crazy bull times will take time but positioning yourself now for the long term should be a savvy move.

“Bitcoin is in an ascending triangle pattern and IF the $4,200 zone is breached on volume, we should see a run up to $5k and most altcoins will enjoy a bullish bump at the same time too.”

That was on 1st April.

It’s where that black horizontal line is on the chart.

And it’s a level that, since the start of December, had marked the limit of how high Bitcoin had been able to go.

You can see that each time the price got to that level, it fell back and moved lower.

See how that happened in December and January.

And it happened again at the end of February.

In technical analysis (the study of price charts) a level like that is known as ‘resistance’.

Because, literally, price meets resistance at that level. (Basically, because supply (sell orders) is greater than demand (buy orders) and so the price can’t go higher.

These resistance levels are significant for a couple of reasons.

First, because they stop the price moving higher.

And second, because when the price eventually does manage to break through those levels, it can mark a major shift in sentiment and the start of a new trend.

Well, that’s what we have seen recently in Bitcoin, according to Michael.

A new crypto uptrend is building

In fact, Michael’s chart was very timely. Remember, he shared this with his members on 1st April.

And he was predicting that if the price broke that $4,200 level, it would race higher.

You may have noticed he drew two pink double-ended arrows on his chart.

The first showed the distance between the lowest point in December (around $3,200) and the resistance line.

That distance is then used as a projected target for the price to reach after the breakout. That’s a widely accepted measurement for this kind of triangle pattern in technical analysis. The second pink arrow shows that. 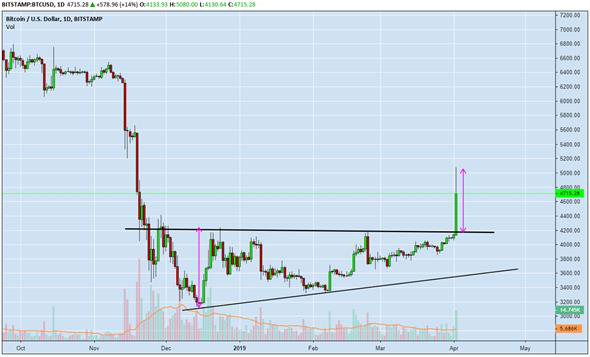 Well, as you can see on this chart from the next day, 2nd April, that’s exactly what happened!

And Michael’s commentary alongside the chart on that day:

“Key resistance level breached, we may well have just heard the starting gun for the end of the accumulation phase (and therefore also the end of the bear market) and the start of a new bull market….?

“As discussed in recent months, savvy traders are building a long term buy and hold position during these times in bitcoin, Ethereum and other alts…”

It was an impressive call from Michael.

And it shows the predictive powers of technical analysis – in which Michael is something of an expert.

But aside from that one exciting break-out move, there’s something even more important about what’s happening here.

This presents a huge profit opportunity

Let me show you what I mean – and explain why it could present a huge opportunity for YOU to make money.

This was just over a month after that break of the $4,200 resistance level, on 3rd May: 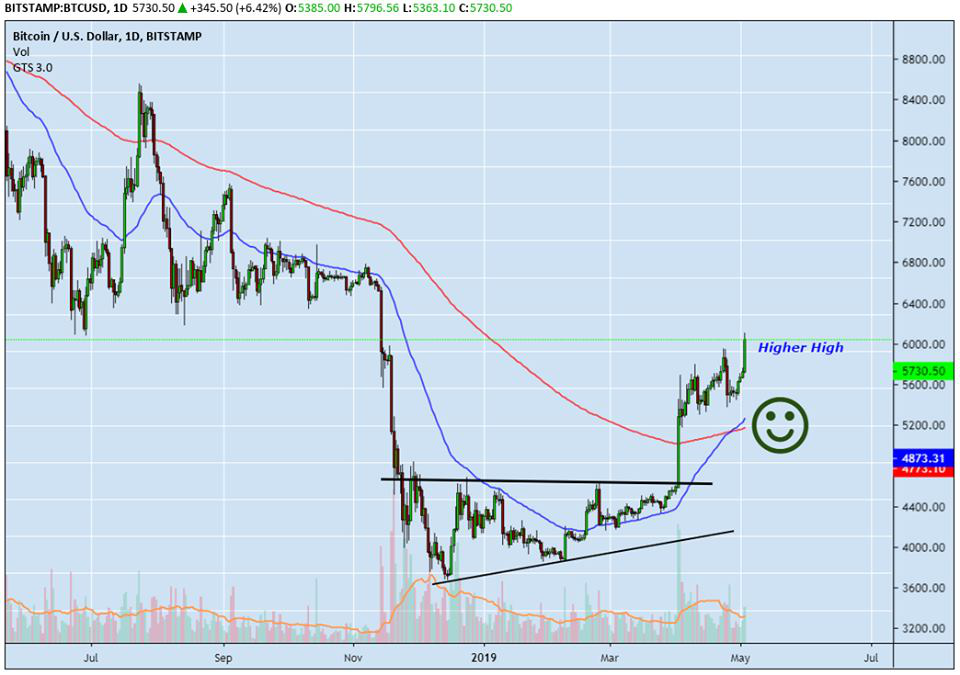 You can see where the price broke through the resistance level, can’t you?

Well as is often the case after a breakout move like that, the price paused for breath.

It kind of goes sideways in a range, moving up and down, as buyers and sellers battle it out.

You can also see, though, that despite the volatility, the general trend is up.

And in fact, this was just the market biding time before the next move higher.

Here’s what Michael wrote to Crypto Traders’ Academy members alongside the chart:

“A short update to say that Bitcoin has just broken upwards again to a higher high and the decision to hold through the recent stormy conditions was the right one. In addition, a ‘golden cross’ of the 50 and 200 Exponential moving averages has just occurred (see chart) which is one of the main indicators I use to identify what the major trend is and this is further confirmation that the bear trend is over and a bull trend is now the near future. Personally, my strategy is to not to buy any more on this breakout but continue to hold my coins and I will add to my position on any significant dips. The past few months have been extremely profitable and long may that continue :-)”

This is an important development in the technical picture for Bitcoin.

The chart shows that since the $4,200 resistance level broke in April, Bitcoin has been moving up, with a series of higher lows and higher highs.

That is the definition of an uptrend.

That’s a major difference to the downtrend (lower lows and lower highs) that characterised the market throughout 2018.

And if Michael is right, then this marks the change from bear market to bull market.

“Look there are a lot of variables… but all the signs are that the bull is back and the bottom is in. I’m confident we will at least challenge new highs for Bitcoin above $20,000 and we’ll likely see $100k in the coming years.”

Given that the price is currently trading at $7,700, that’s some significant upside.

Find out the best cryptos to own

Michael’s even more excited about some of the other cryptos, where there could be even greater profit potential.

Right now, he’s guiding Crypto Traders’ Academy on where he believes the best places to invest are.

To get this guidance for yourself, without any obligation, check out this risk-free trial membership.

I recommend you do it right away…

If Michael’s reading of the charts is correct (and he has excellent form), then the next major boom in crypto prices is unfolding right now.

Leave it too long and there’s a real chance you could miss out.

Read this brand-new report from Michael now to avoid missing out:

Here’s how you could make 20x, 40x or 60x returns from the next crypto bull market cycle.

By the way, this is not just about technical analysis and the charts.

A major shift in perception

There’s been a major shift in the fundamentals, too. In the way Bitcoin and other cryptos are perceived.

It used to be that Bitcoin was seen simply as “digital cash”.

Just a way to pay for things.

Now, people see Bitcoin and other cryptos as far more than that.

The technology is being adopted across industries, with major corporations like Facebook, Microsoft, Samsung and Apple all recently announcing their support for crypto.

But now, cryptos form part of the asset mix when these big players think about building a balanced portfolio and mitigate risk.

That is a huge development.

We’ve seen recently in Monkey Darts how money has flowed into the crypto market when the stock market has fallen.

That’s because people see it as a viable alternative – an uncorrelated asset to offset falling prices in other assets.

This week, the stock market has rallied strongly.

The talk is that this is due to trade tensions easing on the one hand.

And on the other, Jerome Powell (Trump’s puppet and head of the Federal Reserve) promising the Fed will cut interest rates if needed to support the economy and stock market.

Suddenly, everything’s OK. And stocks are back in buy mode.

Let’s see where this goes… and whether there will be more trouble ahead.

Meantime, we can expect cryptos to continue to attract interest.

That’s not to say that it will be a one-way street of rising prices. Crypto markets will remain volatile, I’m sure.

We’re talking about huge potential profits here. That means that risks are higher, too. So, you go into this kind of investment understanding that.

With this kind of opportunity, I’d only risk money that you won’t miss if you lose it.

Think of it like this. If you were to risk £200 in Bitcoin or some other coin and then it ceased to exist, you lose £200.

But imagine if it were to go up in value 20 times, as Michael believes some of these cryptos could…

It’s a good risk to reward scenario, isn’t it?

Of course, first you need to find the good cryptos – and there are 100s of them out there!

Which is why I recommend you follow Michael – he knows this market inside out.

He’s got a far better chance of picking the right cryptos to back.

Click here to get a risk-free trial and see what he’s recommending in the Crypto Traders’ Academy.