Has the “Santa Rally” shifted to this “unloved” market?

Remember a couple of weeks ago in Monkey Darts we imagined Fed Chairman, Jerome ‘Jay’ Powell might be having trouble sleeping?

Lying awake, waiting for the next angry White House tweet…

Dreading the slating he’ll take in a Trump press interview.

Will Powell survive his latest ‘mistake’?

See, every time the stock market wobbles, Donald Trump has a go at Powell.

Or warns him against doing anything to upset the markets… almost to the point of intimidation.

It’s like the big kid in the playground bullying the one with the cool toy.

Here’s what Trump tweeted earlier this week following this piece in the Wall Street Journal suggesting the Fed should NOT raise rates this month:

In other words: “STOP THE RATE HIKES POWELL, OR ELSE!”

(The “good luck!” at the end of Trump’s tweet is rather ominous! Like – “I hope you make the right decision, Jay… for your sake as well as America’s!”)

Thing is, Jay’s known for months that the Fed would be raising rates in December… and he’s been telling the market as much.

And that’s exactly what happened yesterday.

That’s the very ‘mistake’ Trumped warned him against making…

(Even though the accompanying Fed statement said there would likely be two further rate hikes in 2019, rather than the three previously suggested…)

Things started off OK. As though investors were looking forward to the big event… and expecting a better outcome.

From the opening bell, the Dow rallied some 300 points in the morning ahead of the rate decision.

But by the end of the day’s session, it was down 352 points.

In other words, the rate hike caused a 652-point whipsaw sell-off in the space of two hours.

It’s as though investors totally disagree with Jay Powell’s risk assessment of the economy.

They were hoping that such a decision would bring on the longed-for Santa Claus rally.

But that’s not what they got… at least not so far.

… it looks like old Jay’s killed him stone dead.

For now, at least, it looks like the year-end US stock market rally is off the agenda.

By the way, just to be clear, this isn’t a bear market yet. Not if we go by strict definitions (although it’s beginning to feel like one…)

The Dow is down around 13% from the 3rd October all-time high. A 20% drop is the usual bear market definition.

But it’s not far off… and the correction continues.

And with both the Dow and the broader S&P 500 index having broken down below the low end of their ranges, there could be more downside to come.

I wonder what Trump will have to say about this in the next day or so… and how Jay Powell will come out of it.

Will there be some more rhetoric designed to prop the markets up?

We’ll have to wait and see…

Meanwhile, did you see what’s been happening in the crypto markets this week?

Some green shoots at last!

Which is right on cue, given what I heard recently…

The uncanny power of the “magazine cover story”

I was in the kitchen last Saturday, doing some festive art things with my kids.

The radio was on in the background.

And I heard someone start talking about “Bitcoin’s fall from grace”.

I think it was that Moneybox programme with Adam Shaw.

Anyway, it was enough to make me edge away from the glitter and glue storm and the bickering children and listen in.

These guys have a habit of getting things wrong.

Have you heard of the “magazine cover indicator”?

… the trend is probably over.

In other words, it’s a contrary indicator.

You often hear about this in conjunction with companies that have attracted lots of attention.

Remember, this was during the (at the time) seemingly endless bull market that kicked off in 1982.

But by 98/99 most stocks were going up… especially tech stocks.

Any stock remotely connected to the internet was soaring.

Investors were piling into them at any price… convinced they would go only one way… up!

Meanwhile, companies were changing their names to include the word ‘dotcom’ and seeing their share prices immediately skyrocket.

Anyway, as the pioneering online retailer, Amazon was the pick of the tech bunch.

Amazon and its charismatic boss Bezos could do no wrong…

And everyone wanted to cash in on it… including Time magazine which stuck Bezos on its cover: 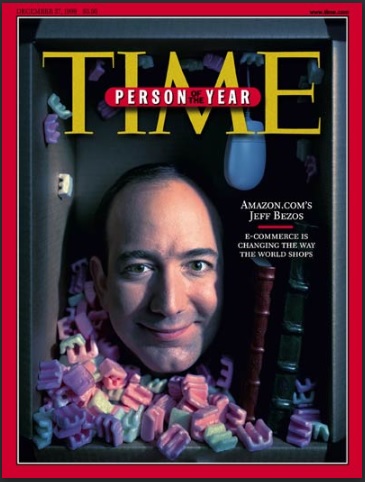 “Here’s the theory behind the magazine cover indicator. By the time a company’s success or failure reaches the cover page of a major publication, the company is so well known that it is reflected fully in the stock price. Once all the good news is out, the stock is destined to underperform. The reverse holds for negative stories.”

The most famous example of the negative story is probably BusinessWeek’s 1979 cover story, proclaiming “The Death of Equities”.

That turned out to be not far from the bottom of the market… and a two-decade bull market followed.

And that’s what I was thinking when I heard the piece on Radio 4 last Saturday.

Did Radio 4’s “death of Bitcoin” story mark the bottom?

OK, so it’s not a magazine cover.

But it’s a mainstream radio channel aimed at the masses.

And they were spouting the usual stuff about how Bitcoin is only useful for the criminal underworld.

They talked about how we’d never see Bitcoin rise again like it did in 2017.

And how it would be seen in the history books as a lesson – about a moment of madness that separated people from their money.

You know… the kind of stuff journos have been spouting about Bitcoin and cryptos repeatedly for years.

My instant thought was: The mainstream is declaring Bitcoin’s demise… perhaps the bottom of the Great Bitcoin Collapse is in?

I don’t know. It’s too early to tell.

But less than a week on since hearing that Radio story, the price of Bitcoin has risen 27%.

Ethereum has done even better, jumping 32% in five days.

Now those are small moves in the scheme of things.

Prices are still down some 80% from the peak.

From here the price would need to rise another 435% for Bitcoin and a whopping 1,316% for Ethereum to get back to the all-time highs.

But then again, far larger rallies have happened in these markets before.

It’s all about sentiment.

For the past year, sentiment has been against Bitcoin and the entire crypto world. It’s been the world’s most unloved market…

Michael Mac from Crypto Insider’s Club describes recent lows as “the depths of the crypto winter”.

But there are lots of positive developments happening in the space.

For one thing, major established financial players are getting involved.

For example, Reuters reported recently about a new cryptocurrency exchange called ErisX that has “raised a total of $27.5 million from investors including Fidelity Investments and Nasdaq Ventures.”

If it gets the necessary regulatory approval, ErisX will allow investors to trade cryptocurrencies such as “bitcoin, litecoin and ether on spot and futures markets starting next year” according to Reuters.

Meanwhile, Bloomberg reports that the company behind the US technology index, the Nasdaq, is “moving ahead with a plan to list Bitcoin futures… betting on sustained interest despite the cryptocurrency’s dramatic plunge over the past year.”

And it’s not just Nasdaq that’s getting involved…

These are fundamental developments that will make cryptocurrencies more accessible to both retail and institutional investors.

Investors need to start focussing again on the potential that blockchain technology offers.

If that happens, we could see huge waves of capital flowing back into this most intriguing of asset classes once again.

It’s early days yet and there is no telling whether we’ve seen the bottom of this market yet.

So far, the Santa Claus Rally hasn’t turned up in the stock market.

And if so, are the two connected?

Are investors running scared from traditional financial assets and putting some faith in cryptos?

Don’t bet your retirement on it.

But if you’ve been toying with the idea of getting some exposure to the crypto market, there could be some good value at current levels…

A small stake that you’re not afraid of losing could do well over the long term.

That’s all from me for 2018. Best wishes to you and your family for the holiday period. I’ll be back in touch in the new year to see what markets have in store for us…