Have you seen this superb Netflix series? 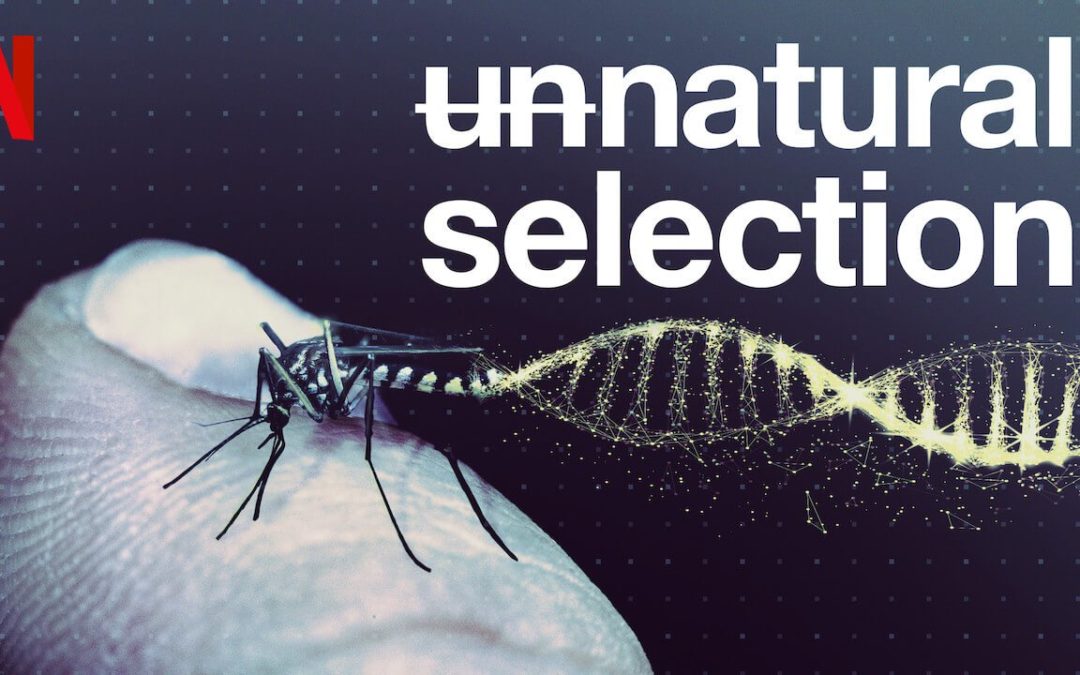 “We start off a blood sample: and we’ll screen you to make sure you are not carrying something. Now everyone lights up positive for something…so don’t worry…but if you do, we can check your embryos for that disease as well.

The second thing we can do is to add frosting on the cake… to ask what else is available?

I understand that you have an interest in eye colour?”

The parents nod, “we’d like blue eyes for our baby.”

“Well there are several genes that are associated with eye colour,” says Jeffery Steinberg, “and we know what they are now and we can give a prediction on the eye colour. It’s not 100% accurate but we are up to about 92% now.”

This is a scene from a new documentary on Netflix called Unnatural Selection.

Over four episodes of the series, the documentary tracks the recent developments in the use of gene editing: on farmers, dog breeders, African villages suffering from malaria, and on parents who are looking to produce healthy children.

It’s an excellent watch. You get a very balanced view on the potential of this technology.

Take Dr Steinberg. He was one of the doctors that participated in the birth of the first test tube baby in the UK in 1978. 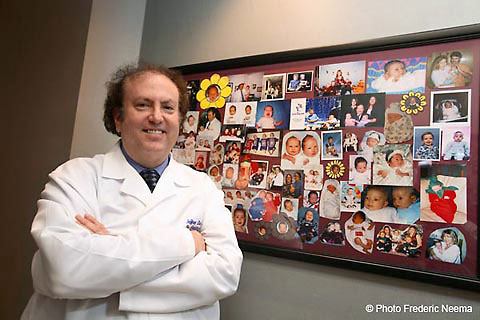 And every week he sits across from parents who are interested in determining the health of their child and other characteristics, if they can.
He is one of the evangelists for gene editing. As the law stands in the US, if he is not allowed to use a gene editing such as Crispr on a human embryo if there is something wrong. His job is to screen and select the embryo with the best chance of living a healthy life.

But his practice also allows parents to select for eye colour.

His team analyses the embryo genetically to see what characteristics it has and an algorithm predicts the likely eye colour. And it’s hugely popular: “it’s pretty evenly split across countries: 30% want blue eyes for their child. 30% want green. 40% of Scandinavian countries want brown eyes…so I guess most people want what they don’t have”. 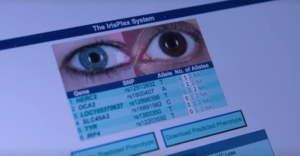 In fact, it may not be long before gene editing is available through doctors like this.

In November, a company called Genomic Prediction announced that it had developed a multi-gene screening technique for embryos: a method, the company claimed, that allows it to scan an embryo for conditions with single gene disorders such as cystic fibrosis.

The company also claims it can look for traits impacted by numerous genes, such as height and intelligence.

This is a very big claim. When a research team led by Hebrew University of Jerusalem statistical geneticist Shai Carmi tested the model, they found only slight gains were likely –
“hypothetical children produced by the highest scoring embryos were approximately 2.5 centimeters taller and 2.5 IQ points smarter”.

What I like about the Netflix series – Unnatural Selection – is that it presents the reality of rolling out a potentially dangerous technology like this.

In the show’s third instalment, which explores the concept of gene drive – a technique that uses Crispr to “drive” a genetic change through an entire population – MIT engineer Kevin Esvelt addresses a number of communities in an effort to gauge public interest.

And people are patient. They listen to him as he explains the benefits of gene drive…

He tells a town assembly in Massachusetts that they might be able to radically reduce the population of ticks that are spreading Lyme disease, and he gets a warm reaction.

He tells a community in New Zealand that he can solve their massive rodent problem.

But at another meeting of Maori elders, Esvelt loses the room completely when he reveals that he receives research funding from Darpa, the Defense Advanced Research Projects Agency

“We’ve heard lots and lots of nice words from the colonisers over the millennia that have proven to be hollow,” says one man.

“You’re a little bit like the missionary who comes along with a good story, but behind you are a whole lot of men with rifles.”

Most get up to leave.

But then the film cuts to the UN where a proposed ban on CRISPR is shut down by country after country.

Japan, China, the UK…each takes their turn to explain that shutting down this technology would be against their national interests.

In fact, I think several realities about CRISPR are apparent from this series…

The Chinese and Russians are certainly in no mood to ban Crispr. They already using gene editing to edit crops and cattle and yes, human embryos.

It is clear to me that China is taking a lead in this field. With a lax regulatory culture, matchless and growing volume of genetic data and the high strategic priority the state gives to genomics, there is every chance that the most surprising developments in gene editing will happen in China.

BGI is already running a global project to unveil the genetic basis of cognitive abilities with many western academics and members of such groups as Mensa taking part, having passed BGI’s strict test for participation in the project.

2. The barriers to entry are very low

At the same time, we may see a whole wave of people experimenting with gene editing.

At the start of the series, we are introduced to a biohacker named David Ishee.

Each night Ishee sits in his shed, trying to cut and paste a jellyfish gene into the sperm of one of his 150-pound male mastiffs. 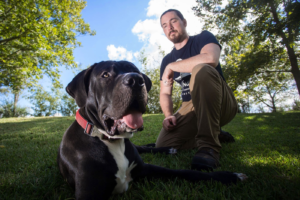 That sounds reckless, and dangerous. But it turns out that he is a lot more committed to the scientific process than many of his contemporaries.

“I had assumed that getting DNA and making changes cost millions of dollars, and that you needed a huge lab and a research team and all that stuff,” he says. “But you’d be surprised what you can find on YouTube.”

And he’s right. Gene editing technology is very cheap if you want to experiment.

Last year, a group of scientists led by virologist David Evans of the University of Alberta in Edmonton, decided to make a big point about this.

Evans and his team announced that they had synthesized the horsepox virus, a relative of smallpox, and then decided to publish a paper in a medical journal, showing exactly how they did it.

The team purchased some DNA fragments, each about 30,000 base pairs in length, from a company in Germany that synthesizes DNA commercially. That allowed them to stitch together the 212,000-base-pair horsepox virus genome. Introducing the genome into cells infected with a different type of poxvirus led these cells to start producing infectious horsepox virus particles at a ferocious pace. The virus was then “grown, sequenced and characterised”.

According to Evans and his team, the whole process was cheap: the scientists worked with a budget of less than $100,000.

The genetic materials were available through the mail. And they made it clear that if it was possible to synthesise horsepox, then it was possible for anyone with the same resources to produce smallpox.

And yet you have to wonder how many viable treatments will come to market in the next three years.

The series follows a disturbing story about a man who wants to experiment with a new HIV treatment.

He runs through a series of injections…before tearfully deciding that he has been duped by unscrupulous investors into becoming a glorified lab rat.

How they have to fight with insurance companies to afford treatments, with some emerging drugs costing over $500,000 a year.

The dream of targeted gene therapies for the masses may be some time off yet.

In recent months I’ve written about companies using CRISPR a few times: how are using it to bioengineer crops, disease resistant pigs and cattle, and monoclonal diseases.

I’ve tried to be balanced about the exciting potential.

I pointed to the small pox problem before and last month we looked at a terrifying experiment with gene edited mosquitoes.

My hunch is that gene editing will first advance in those areas where there are decades of careful research in genetic testing already.

That means in the use of crops and cattle.

And I think the immediate use for the technology in humans could be in targeting monoclonal diseases.

And perhaps cystic fibrosis: which affects a few members of my family.

But this Netflix series left me with the feeling that this technology is already beginning to run wild.

Despite the obvious risks of widespread use of gene editing, you can be confident that research and development will continue as China, Russia, the US and others attempt to establish themselves as the dominant the industry.

They recognize that a number of things have come together to drive a life code economy. These includes:

Within ten years, virus, crops and human…practically anything that is genetically loaded…will have their genes profiled, tested and in many cases reprogrammed.

As the show suggests, this could usher in the age of ‘unnatural selection’ in so far as resources and demand determine.

So far, CRISPR has not worked as an investment story.

The shares of Intellia, Editas and Crispr Therapeutics have fallen badly over the last year.

These are high risk stocks: with very little in the way of earnings and huge potential regulatory risks.

But if their technology is licensed out to pharma, agriculture, food and biotech companies, there is series potential.

I’ll keep you updated on this and other developments in gene editing, here in Monkey Darts.

In the meantime, if you are subscribed to Netflix, it’s worth watching Unnatural Selection.

You can see a trailer here