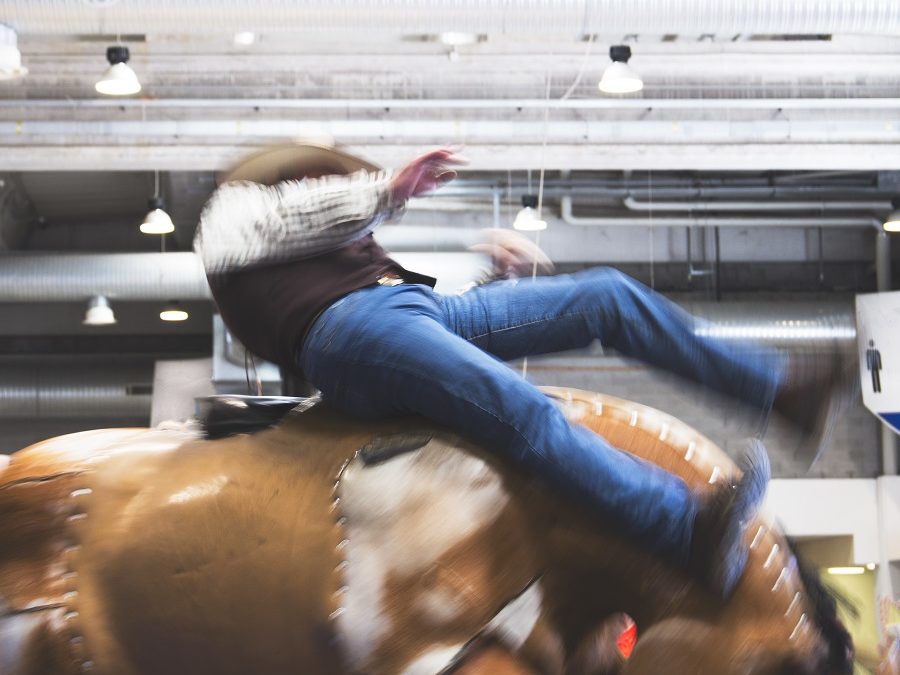 Stocks have been having a little pull-back again these past few weeks.

I mean, I know stocks have had a decent run since the big sell-off before Christmas…

In fact, from the Christmas Eve low to the latest swing high on 1st May, the Dow went up 24.5%.

And you’d be happy to make almost 25% on your money in four months just by tracking a stock market index, wouldn’t you?

But I was expecting a lot more than this… something rather more exciting, given the fanfare it’s been getting.

I wanted clear signs that there was a ‘stampede’ into the market, with investors tripping over themselves to buy stocks.

As far as I can work out, all we’ve seen is a bog-standard push higher in an already over-extended bull market.

Which means that either the Melt-Up just hasn’t happened yet… and that it’s still going to happen sometime later.

Or… that it isn’t going to happen at all.

Let’s look at the evidence to try to figure out the most likely scenario.

Before that, a little reminder about what a Melt-Up means.

The basic idea is that bull markets end with a huge rally that takes stocks sharply higher in the final stages… before the unavoidable crash.

I’ve seen a Melt-Up described as the “final furious stage of a bull market… a period of manic euphoria”.

And this euphoria leads to outrageous, rapid advances in the market price.

Think of the dotcom years – which is when I first started observing the madness of financial markets.

Back then, the US benchmark index of technology stocks – the Nasdaq – DOUBLED between mid-1995 and mid-1998.

Impressive at the time.

But it was from 1998 onwards that the real ‘euphoria’ kicked in… and everyone started stampeding into shares, especially anything dotcom-related.

A picture of a Melt-Up

After a 25% pull-back from the mid-1998 high, the Nasdaq entered its final leg higher… 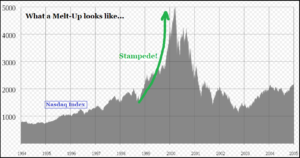 In the final 18 months before the ‘top’, the Nasdaq blasted another 233% higher.

And the people who rode that move and got out at the top, made a lot of money.

If they didn’t get out… and held on through the subsequent sell-off, convinced that the Nasdaq would take out the highs, they had a hell of a wait…

And it wouldn’t pass that peak again for almost 15 years – which is a cautionary tale in itself, for anyone tempted to buy in near the end of a market cycle.

Anyhow, that chart above is what a Melt-Up looks like!

I don’t know whether the Melt-Up proponents are expecting something similar to happen this time around… with the Dow Jones and the Nasdaq?

Perhaps last year’s Christmas Eve Dow low (21,456) is meant to be the bottom of the pull-back, equivalent to that seen before the 1998-2000 Nasdaq stampede in the chart?

Is that what Melt-Up guys are expecting to happen over the next 12 months?

Well, there’s no sign of it yet so far as I can see.

But is it on the cards?

Is the stage set for a massive Melt-Up?

Long-time Monkey Darts readers may recall that we believe the top is already in for this market cycle.

And from here on… the market is heading lower.

That’s the idea – and it’s only an idea… based on all that we have seen.

Of course, we could be wrong!

But look at what’s going on in the world and ask yourself if now is the time to be stampeding into stock markets.

To do well, stocks need the economy to be strong – and to get stronger.

But economic growth is stalling around the world.

Worse, the massive growth engine that’s been largely responsible for global expansion – China – is under threat.

And that’s potentially very bad news for the world economy… and for stocks.

The Wall Street Journal picks up the story… and wonders how investors should position themselves for the worst:

“How do you trade a trade fight? A previously abstract question is becoming more pressing for investors as U.S.-China trade relations fray.

“What we’ve learned the last few weeks is this is a genuine negotiation and both sides appear willing to escalate this,” said Michael Metcalfe, head of global macro strategy at State Street Global Markets.

“It’s a credible threat and markets don’t appear ready for that.”

If the escalation in the trade war continues, we’re more likely to see a financial meltdown… rather than a Melt-Up.

Don’t bet everything on stocks

That’s not to say that the right move is to sell every financial asset you own.

For starters, keep hold of some gold and silver if you have some or consider getting some if you don’t…

The 5% pull-back in prices since February may offer a good opportunity.

Remember, with gold you’re not really looking for massive upside anyway. Although, speculators might look at gold mining stocks to catch some leveraged upside on a move higher in the underlying metal.

But gold is more about adding some protection to your portfolio in the event your equity exposure takes a big hit.

When stock markets fall, gold tends to hold its value or even rise, so can be a like an insurance policy.

And if gold really does take off, then silver will probably move even faster – that’s the usual pattern.

And talking of assets uncorrelated to the stock market, note how cryptos like Bitcoin and Ethereum have been performing in recent months.

We looked at this in a recent Monkey Darts issue, but it’s worth revisiting…

While the Dow Jones index has fallen 4.4% since the start of May, Bitcoin is up 44%.

In other words, people are putting their money to work in assets other than stocks.

If you’re a member of the Canonbury Crypto Trader’s Academy, you’ll know that the guys there believe these moves could be just the start of the next major crypto bull market.

They’ve been doing some great analysis lately on where they believe that could head ultimately.

So, you’d do well to follow their expert advice on how to position yourself for that…

(And if you’re not a member, but would like details, just sent them an email to [email protected] and they’ll get something out to you.)

As for stocks, again, I’m not suggesting you bail out of everything.

Over the long-term, equities are shown to be the best performing asset class. So, you should keep some exposure.

But if you hold anything that’s had a great run and is looking over-valued, you may want to trim your exposure. Or at the least, be prepared to do so if markets continue lower.

The markets could go higher from here. Maybe the Melt-Up is in fact yet to come… when (IF) this trade war situation is solved.

But given all the threats out there right now, I’m not inclined to beg big on that outcome…

I’d far rather spread my investments around and be prepared for the worst-case scenario.