How do we stop bushfires from spreading everywhere? 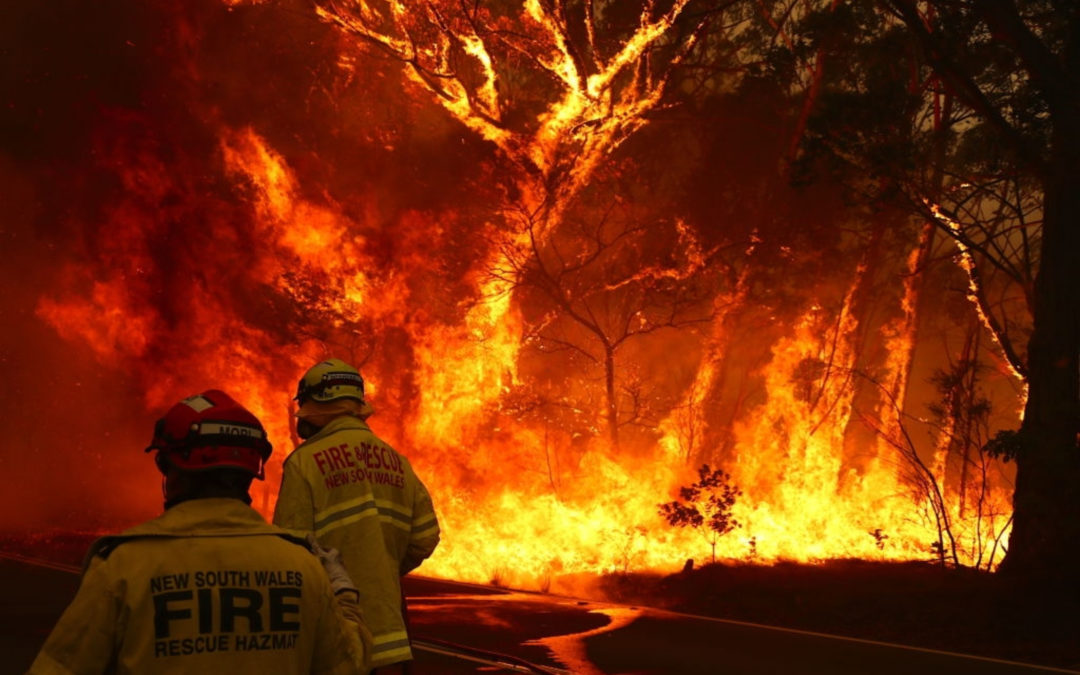 Over the last month, we’ve watched as devastating fires have spread across Eastern Australia: with 5 million hectares of land scorched by bushfires and yellow smog invading many major cites.

The conditions for this crisis have been years in the making.

Over the last three decades, the annual temperature in Australia has been rising at an alarming rate.

This chart from the Australian Bureau of Meteorology tells the story.

As you can see, the average temperature across the country has been spiking almost every year since the mid-eighties.

In mid-December the nation saw the hottest day in history – 41.0 degrees Celsius.

And this followed the driest spring since records began 120 years ago.

Trees, shrubs and grasslands have turned into perfect tinder for flames as dry lightening storms spread across the country during the summer months.

To compound the disaster, there have been isolated reports of arson: in Queensland, police say 114 fires out of 1,048 (about 10%) have been deliberately or recklessly lit through human involvement between September and 8 January.

But this is a crisis that is decades in the making.

And there are no easy solutions.

Take your pick amongst the extreme solutions to climate change and ecological collapse.

We could take aggressive action to reduce emissions by curtailing demand: although I don’t see us radically reducing our dependence on fossil fuels in the next two decades.

We can invest heavily in electric vehicles as a way to reduce emissions.

There are a host of companies working to develop lab grown meat, which could reduce our reliance on livestock.

In a recent Monkey Darts I looked at one of the most extreme solutions: Geoengineering.

This is the business of reducing the temperature of the planet by interfering directly in process of climate change.

One method is to pump aerosols in the upper atmosphere to mimic the effects of a volcanic eruption. With a canopy of particles reflecting light and creating cloud cover we might be able to manage how temperatures change.

The mirrors, he says, would barely be visible from Earth and would block just 1% to 2% of the sun’s light but that would be enough to cool the planet according to Wood.

In the meantime there is another side of geoengineering that looks promising: carbon capture.

This is the process of trapping carbon dioxide and storing it before its released into the atmosphere.

We could plant millions of trees. We could pay farmers to grow fast growing grasses to soak up C02 and burn it off.

Or we could try and collect carbon and store it before it’s released into the atmosphere. One of the biggest carbon capture projects so far is in Norway. It was started by oil giant Equinor after the government introduced a tax of roughly $65 per tonne of CO2 in 1996. They realised that their Sleipner gas field was maturing and also had huge reserves of carbon dioxide (probably about 9% of the remaining reserves). So they started pumping CO2 into a massive sandstones reservoir under the sea and storing it there in rock formations.

To date Equinor has stored more than 16 million tonnes of CO2 into the Utsira Formation at a cost of approximately $19 per tonne.

But before we unplug our major systems from fossil fuels and transition to a low carbon economy, we need to prevent our ecology from collapsing.

This is the immediate problem: preventing a spiral of droughts, fires, storms and food crisis.

Climate breakdown threatens to cause what scientists call “multiple breadbasket failures”, through synchronous heatwaves and other impacts.

The UN forecasts that by 2050 feeding the world will require a 20% expansion in agriculture’s global water use.

But water use is already maxed out in many places: aquifers are vanishing, rivers are failing to reach the sea.

And with global heating – due to greenhouse gases already released – is likely to reduce dry season rainfall in critical areas, turning fertile plains into dustbowls.

How do we prevent fires and destruction of vital farmland?

Well there are fire management strategies we can follow: controlled regular burns each year that prevent huge fuel loads from building up, while also rejuvenating soil.

That works, although it has been difficult in Australia in recent years because the windows for controlled burning have gotten very smaller and smaller.

We might also rely on companies such as Trimble Navigation (NASDAQ: TRMB).

I’ve written about Trimble before. It is a California-based developer of technology that could be vital in preventing ecological collapse: especially for the farming industry.

It makes hardware that puts global positioning information and land-surveying technologies to use in a whole swathe of industries. 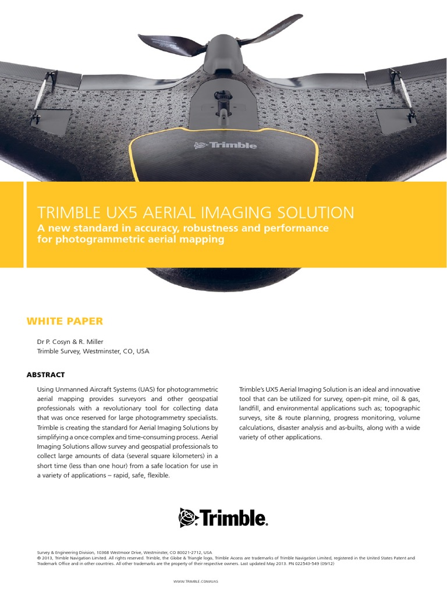 Think of them as a company that produces robots that survey  environments that are too vast or treacherous for humans to survey.

In fact, Trimble seems to be working at several at flash points for extreme weather…

In Portugal’s Alvo Natural Park, forest fires are a constant threat each summer.

7,5000 acres of mountainous terrain make it very difficult to contain fires, or to stamp them out once they spread.

So the local authorities have been using Trimble’s GPS navigation systems to help the park to respond quickly to threats of wildfire.

It means the Park and local emergency services can locate and respond quickly to fires in an area that is being ravaged during recent heat waves.

In Laos, the Nam Et-Phou Louey National Protected Area has been using Trimble’s surveying technology to monitor deforestation and degradation. 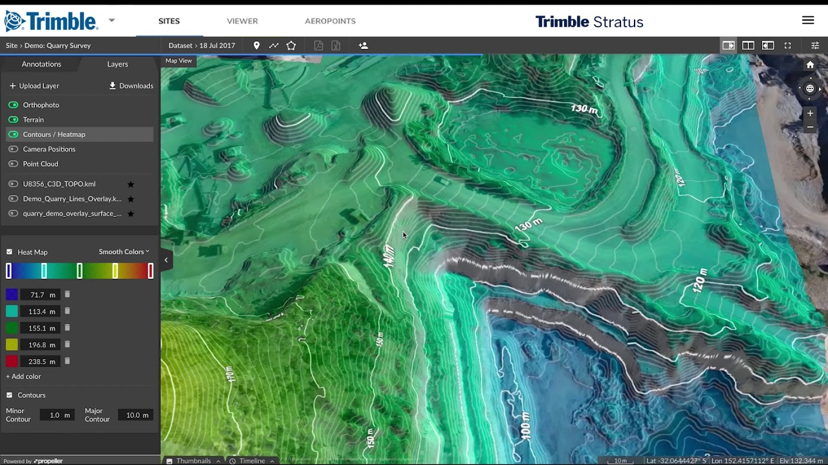 To collect so much image data manually would take an overwhelming length of time.

In British Columbia, Canada, drones have been helped in at least 13 fires this year so far, being used primarily for mapping and hotspot detection. Drones are able to produce maps overnight which can be used by fire and evacuation crews first thing in the morning and also free up aircraft to do other vital work.

In Pakistan, nearly 20% of land likes dormant because of droughts and inadequate water.

Farmers in the Indus River Basin have been able to reduce water usage by 40% in many fields by using Trimble’s laser system to achieve perfectly level field surfaces.

Governments across the world use Trimble to monitor dams, volcanoes, droughts, earthquake faults and floods.

Or take the work Trimble does in agriculture, which account for 30-40% of their revenues.

No other industry is more hostage to weather. Just take the farmers in the US Corn Belt. Over the last six years, they had fallen foul of a series of freak weather events.

First came the droughts: many farmers in the Corn Belt have watched as their harvests withered to grey stalks year after year.

Then came rainfall: as the rest of the world has warmed, the region’s summer temperatures dropped as much as a full degree Celsius, and rainfall increased by 35%, the largest spike anywhere in the world.

And then came the pests: the rising temperatures during the summer months has massively boosted the reproductive and metabolic rates of insects.

These swarms were ruining crop in no time. Many farmers migrated north in the hope of a more temperate life. 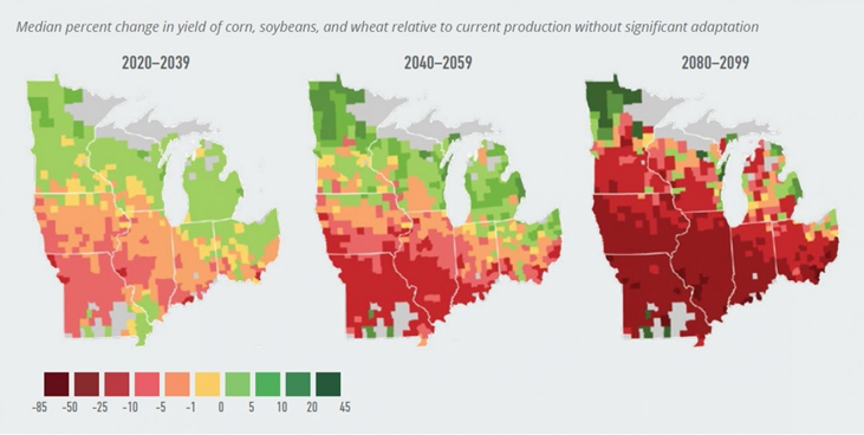 Corn acreage in Manitoba, a Canadian province about 700 miles north of Kansas, has nearly doubled over the past decade due to weather changes and higher prices.

But some farmers dug in. They began to explore how technology could help them stay ahead of the freak weather.

Ten years before, less than 10% of farmers had mobile phones or used the internet.

Now they were rapidly adapting to tech. Companies such as Indigo Ag and Climate Corp started collecting vast troves of information about their environments — data on rainfall, temperatures, soil types, weather, hydration.

By watching what was happening in the atmosphere – from satellites and drones – and combining it with data from the ground – the phones and machinery used by farmers – these companies are helping farmers to stay ahead of the worst changes in conditions, rapidly boosting harvests in the process.

Meanwhile, Trimble holds a host of valuable patents in GPS related technologies: technologies that enable the collection and processing of centimetre accurate data from aerial imaging.

Its technology is also widely used in the engineering, construction and mining sectors.

Take the UX5: a 5.5 pound, 40 inch wingspan UAV runs on a lithium-ion battery, an electric motor and a pre-programmed flight plan.

These drones are an invaluable new piece of machinery for stressed farmers. They cover huge tracts of land, creating sensitive maps that allow the famers to see their lands and crops in hyper detail.

It is launched via a hand torqued launcher and lands in a confined space on the basis of reverse thrust, once the user has triggered the landing sequence.

It can accomplish 180 acres of near infrared spectrum imaging at one-inch resolution in a single flight to detect pests, weeds, mineral deficiencies. 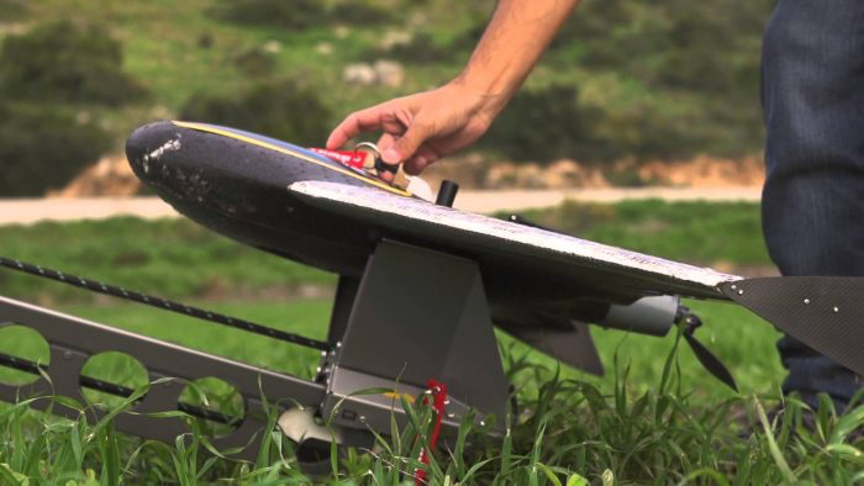 And with so much land being exposed to water and climate stresses, Trimble’s farm drones could play a key role in helping farmers adapt to enormously difficult conditions and mitigate some of the effects of droughts and damage to their environment.

That brings us back to the bigger solutions to climate change: solar and nuclear power, electric vehicles, reduction of meat and fossil fuel demand: I’ll have a look at some of the more promising developments in these in the coming weeks.