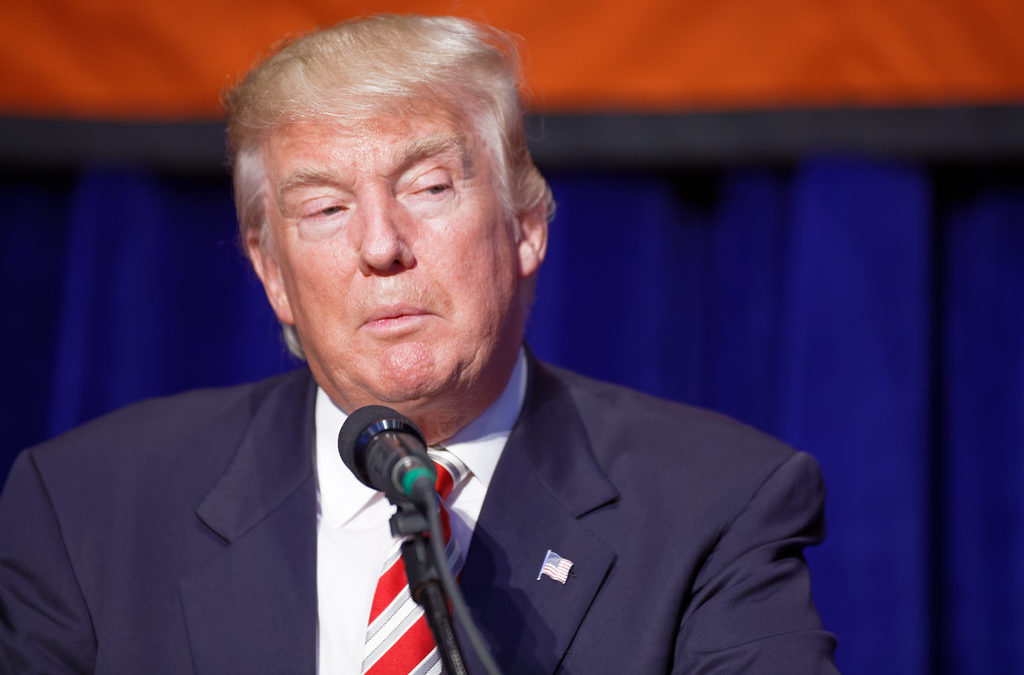 So, US markets closed at all-time highs on Wednesday, ahead of yesterday’s Independence Day holiday.

Cue Donald Trump taking to Twitter to brag about it:

The Donald put on huge celebrations for what is America’s most important national holiday.

These included a flypast of military jet planes and tanks on display around the Lincoln Memorial.

And an over-the-top firework display, with millions of dollars’ worth of pyrotechnics imported from China.

Trump wants the world to see his military might and how well his country is doing under his rule.

Well, I hate to be a party pooper.

But this record-breaking period of economic growth – and the accompanying bull market – is getting long in the tooth.

And it could be about to end.

When it does, stock market valuations could get cut in half.

According to Ben Carlson, who writes a blog called A Wealth of Common Sense, the US economy is on track to make history:

“Unless the GDP suddenly falls off a cliff, next month will mark the longest economic expansion U.S. history, surpassing the period from March 1991 to March 2001.”

But the good times won’t go on for ever, Carlson says:

“Expansions don’t die of old age but eventually excesses will build in the system which will inevitably cause another economic contraction. No one knows when exactly that will be, but economies are nothing if not cyclical.”

And when it ends, and the US economy starts contracting rather than expanding, stock markets will react violently.

Here’s a chart he put together for Fortune showing how the US stock market wiped out wealth in previous recessions: 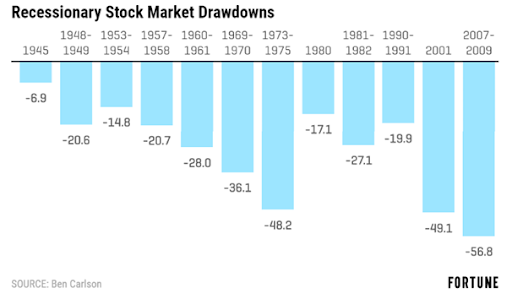 There is no guarantee that the onset of a recession will spark a big sell-off. But it’s highly likely.

According to Ben Carlson, two thirds of the time it has let to a fall of 20% or more.

Feel-good factor propping up the market

The question is: when will Donald’s Trump’s good times end?

Of course, he’s going to do all that he can to try to keep the party going.

His re-election for a second term counts on it.

That’s why he’s held a gun to the head of Jerome Powell to make the Fed signal that there are rate cuts coming.

And why he’s getting the word out that there’s an end in sight for the US/China trade dispute.

It’s all about the feel-good factor.

And so far, it’s working a treat.

The Dow Jones has recovered all the 8% slump it suffered in May.

And yesterday it pushed on to reach all-time highs, beating last October’s record.

Maybe the promise of a rate cut on 31st July will keep stock markets in bull mode for a little while longer.

Especially given all the negative signs out there.

64% probability of recession dead ahead

I’ve just been reading some chilling analysis from two leading financial experts. And if it’s right, recession could rock the US sooner than most are expecting.

Business Insider quotes from her recent note to clients:

“Slowing global growth, inverted yield curves and weak credit and money supply growth are contributing to rising concerns that a recession could be in store as the expansion hits the midpoint of its 11th year. The US Treasury market is showing that concern, discounting four rate cuts in the next 12 months.”

And more specifically, she points to a reliable recession forecasting tool provided by the New York Fed.

Right now, this is showing a 28% probability of recession in the 12 months ahead.

That doesn’t sound too high.

But in fact, each time the indicator has reached 30% since 1960, a recession has followed.

And according to another analyst, Jesse Colombo at Forbes, this is an important and ominous sign:

“The last time that recession odds were the same as they are now was in July 2007, which was just five months before the Great Recession officially started in December 2007.”

But it gets worse…

Colombo takes his analysis a little further… and reaches an even more sobering conclusion.

He’s found that the New York Fed’s tool somewhat underplays the threat of recession. And that in fact, it could be a lot more serious.

I’ll let him explain why:

“The New York Fed’s model has underestimated the probability of recessions in the past three decades because it is skewed by the unusual recessions of the early-1980s that were caused by Fed Chair Paul Volcker’s aggressive interest rate hikes that were intended to end the persistent double-digit inflation at that time.”

So, Colombo strips out the pre-early 1980s data to get a more accurate prediction methodology. He concludes:

Right now, stocks are at a significant level.

They are at all-time highs, just as the economy is poised to start contracting.

The big question is whether Trump’s feel-good bragging and the chances of a Fed move to cut rates at the end of the month are enough to keep this rally going.

Will the “Melt-Up” continue, as some are predicting… or are we at the end of it and the stock market bubble is about to burst?

Ben Carlson wrote some good analysis where he crunched the data on previous bubbles.

Usually, bull markets end in a whimper rather than a big surge higher. He explains:

“This is because market tops are more of a process than an event. Market crashes can happen fast and indeed the Great Depression and Black Monday crash of 1987 are perfect examples of this. But this rarely works in the opposite direction as markets usually grind higher as opposed to experiencing gains in huge chunks.”

And going on past experience, the chances are we’ve already seen the biggest gains, according to Carson:

“Eventually, that elusive sell-off will occur but if history is any guide, investors shouldn’t expect to see enormous gains before we get there. The biggest gains typically come during or after bear markets or in the initial stages of a new bull market, not a blow-off top in the late stages of the bull…”

Of course, that’s all in the past.

But I’m not inclined to pump money into stocks at these levels.

I suspect if we’re patient we’ll get the chance to buy in at far lower prices in due course.

And in the meantime, if the Fed’s about to start lowering rates that will make the dollar less attractive to investors.

Which means we could see “anti-dollar” assets like gold and cryptos continue to do well.