Is The Bank of England Bluffing?

When investors are relaxed about the outlook for the economy and their money, stock markets go up, gold goes down.

And when they’re worried, stocks go down and gold goes up.

It makes sense doesn’t it?

If you think the economy is going to hit the skids, why tie your wealth to a bunch of shares that could hit the skids with it?

You may as well bail out of stocks and buy a lump of scarce, shiny metal that has held its value over millennia. (I’ll come back to gold later…)

Investing is a long-term game.

And so long as you like the company, you should hold the stock forever…

Forget about the short-term market moves.

That’s the Warren Buffett line – and he should know, right?

He’s the world’s 3rd richest person and got that way from owing stocks ‘forever’ through thick and thin.

But the thing is…

Your average-Joe-on-the-street investor doesn’t think like Ol’ Uncle Warren, does he?

The ordinary investor panics when the outlook feels bad.

And he goes ‘all in’ when things feel good.

Check out the FTSE!

See how the FTSE’s shaken off that last little wobble it had back in March and has its sights on 8,000: 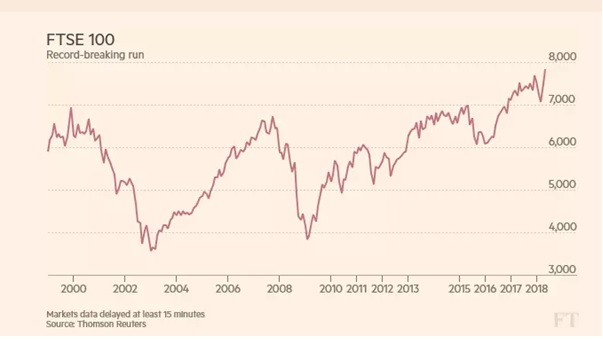 Even with yesterday’s 71-point drop after Trump cancelled the North Korea meeting, the FTSE’s just 2% off all-time highs.

Investors are relaxed right now when it comes to UK shares.

Sentiment is decidedly ‘risk on’.

I think there are a few moving parts to this.

The first part is the price of sterling.

Don’t forget, just because the FTSE is the index everyone thinks of when you’re talking about UK stocks, it doesn’t mean it’s all about the UK…

In fact, a lot of UK stocks earn a big chunk of their money in overseas markets. They get paid in foreign currencies like the dollar and the euro.

That means, if the pound is strong against the dollar, the US dollar earnings of UK companies are worth less.

Each dollar of revenue will exchange for fewer pounds when it’s converted to report financial results.

And it’s the same the other way around.

When the US dollar (or euro) is strong against sterling, that’s great news for UK companies with US/euro earnings…

Those dollar/euro earnings translate into more pounds when the conversion is done. And that flatters the results!

Which is all good for the share price of that company… and for the UK stock market.

As I’m sure you’ve been reading or hearing on the news, sterling has been under the cosh lately…

It’s lost almost 7% of its value against the dollar since the middle of April.

Investors are relaxed: they see good things for corporate earnings.

And that’s good for the market.

It’s a little bit counterintuitive this one…

And you’re right… it should. But it’s not happening – not yet (although I think it could soon) …

For now, though, the oil price is GOOD for the FTSE (and short-sighted investors!)

We’ve been following the story of the rising oil price here in Monkey Darts over the past few weeks.

If you’ve been following these e-alerts, you know the score…

Basically, oil supply is restricted. Demand is strong (for the moment).

We’ve got madmen like Donald Trump, Kim Jong Un, Bashar al-Assad and Vladimir Putin in power.And we have the ongoing threat of war in the Middle East.

Throw it all together and it’s no wonder the market has sent oil prices to levels not seen for three and a half years.

That’s been great news for the FTSE’s giant oil companies like BP and Royal Dutch Shell.

Oil is their product. The higher the oil price, the more money they get for selling it.

Given that their earnings are largely in dollars, too, these stocks get a double blessing. And that’s great for their share prices.

Seeing as they account for a large percentage of the value of the index… it’s been good for the FTSE too.

So, we’ve got weak sterling and strong oil prices that have been driving the FTSE higher.

And lastly, the Bank of England’s played a part, too.

Mark Carney and his cronies have been stringing the market along that there would be another UK interest rate rise this month.

But it didn’t come when the Bank announced its policy decision on 10th May.

“Britain’s economy slowed to a virtual standstill in the first three months of 2018, the weakest period of activity in more than five years.

Office for National Statistics figures showed a sharp contraction in the construction sector, weaker manufacturing growth and a squeeze on consumer spending power contributed to GDP growth of 0.1% in the first quarter.”

Not looking great is it?

Retailers are failing, either totally or going for voluntary arrangements to avoid liquidation…

Even Marks and Spencer announced earlier this week it’s shuttering a third of its high street stores by 2022.

And yet the market is punching towards new highs!

Talking up the pound

The thing is, all this talk of rising interest rates from Carney and his mob…

You know what it’s about?

They’ve been trying to talk up the pound. Make it worth more against other currencies.

The old saying is that money chases yield.

So, if the market thinks the yield on a currency (i.e. the interest rate) is going up, money flows into the currency. That drives the price up.

But why does Carney want a stronger pound?

Because he’s been woefully failing on his job as head of the Bank of England: to keep inflation at its 2% target.

Now you may be thinking…

There have been headlines this week about inflation being at a 13-month low. And ok, that’s what the papers say…

But the fact remains that at 2.4%, it’s still WAY above where it should be.

The Bank needs it lower.

Carney and co. see the inflation problem as one largely caused by a weak post-Brexit referendum currency.

So… to correct the problem, he wants a strong currency.

In other words, import prices decline.

And the knock-on effect of that decline makes goods and services cheaper.

In other words, a higher pound lowers inflation.

And THAT’s why Carney has been ‘warning’ of higher interest rates. To lure capital in and drive up the pound.

Earlier this week, one of Carney’s henchmen, Gertjan Vlieghe, hinted rates could rise six times in the next three years.

Only it hasn’t worked. The pound fell 187 points, almost 1%, against the dollar the day after Vlieghe’s comment.

It’s like the market just doesn’t believe these guys anymore!

They don’t believe the Bank will raise rates anytime soon.

And I get that.

How can they raise rates now?

With the economy on the floor?

It would risk sending the economy right back into the recession we’ve been trying to escape for the past 10 years.

As I was saying earlier, investors are relaxed about stocks.

That’s why the FTSE’s knocking at the door of 8,000 – a level it’s never touched before.

We’ve got virtually zero GDP growth in the UK.

And we’ve got inflation that’s way above target, with a falling currency and a rising oil price (both inflationary).

We’re not there yet.

But what if we get another spike in inflation and further weak UK economic growth?

That’s no good for stock markets.

Meantime, keep an eye on the price of gold.

It’s taken a bit of a breather over the past couple of weeks. But you can see how sensitive it is to geopolitical tensions…

If relations between the US and North Kora deteriorate further – or if tensions escalate elsewhere in this crazy world – we’ll see if gold earns its stripes as the ultimate crisis protection.