Is the world’s financial “linchpin” heading for disaster? 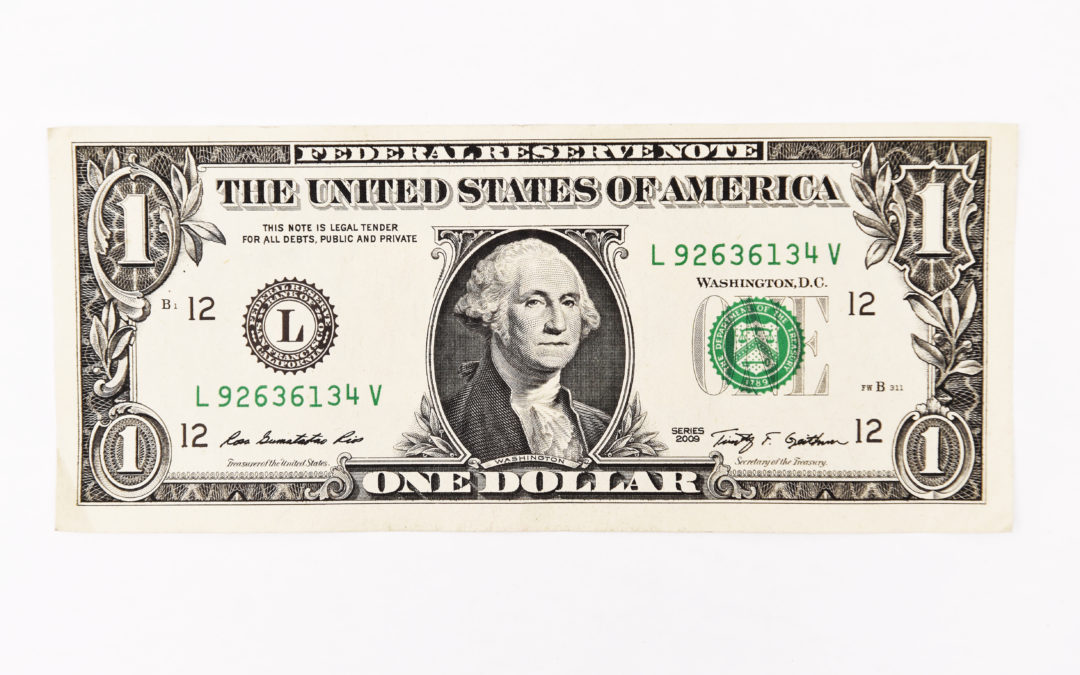 The big story on 8th November 2016 was the US Presidential election, which took place on that day.

You hear about a lot of people who said they Predicted Trump would win. I worked with a couple of them myself.

But by far, most people didn’t see it coming.

They saw Barack Obama passing his front door key to Hilary Clinton as he left The White House.

So, Trump’s victory was a shock result to most.

Just as some five months before it had been a shock result that the UK electorate had voted to leave the European Union.

It’s funny to think how much has changed since both key dates.

And how much has stayed the same.

Here in the UK, we’re on our third Prime Minister since the Brexit vote… with potentially another change on the cards.

Yet, three and a half years on and we’re no closer to leaving the EU, whatever Boris Johnson says!

And the values of both the FTSE 1oo and the pound are within 10% of where they were the day after the vote. Both are higher.

Meanwhile, in the States, it’s been three years of changes. Not least on the domestic politics front.

Some 65% of Donald Trump’s senior-ranking advisors had “either quit, been fired or forced out of the White House” within two years of him taking office, says the BBC.

At the same time, he’s gone to war against economies he sees as competitors on trade.

And whilst the current talk is that the US and China will strike a deal next month, we’ve heard that talk before… many times.

So far, each time it has come to nothing.

And of course, while all this goes on, and as Donald Trump does his best to keep his second term hopes alive, he’s facing impeachment.

But despite all that’s happened in the last almost three years since Trump won the election, one thing has barely changed at all…

The value of the US dollar.

Bloomberg’s John Authers calls the dollar “the world’s single most important financial measure” and the “linchpin of the financial system”.

And it’s trading almost exactly where it was on the 8th November 2016.

“Using Bloomberg’s broad measure of the dollar against its major developed and emerging trading partners, it’s exactly where it was when Donald Trump was elected president. It’s also sitting exactly on its average price for the last 200 days. The hurly-burly of the Trump years have left it unchanged, while there’s no clarity as to whether the trend is up or down.” 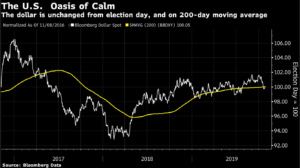 OK, from peak to trough, the dollar saw a range of about 13% over the period.

But after those fluctuations, it has ended up where it started.

With all that’s gone on in the world, the dollar has been stable.

Much to the annoyance of Donald Trump, as regular Monkey Darts readers will know…

Why the dollar will fall

Trump has been loud in his criticism of his chairman of the Fed, Jerome Powell, for not slashing rates farther and faster.

His idea is that with zero per cent or even negative interest rates, the US economy would be in a far better state than it is right now.

And therefore, so would stock markets.

And so would his chances of keeping the keys to The White House after November 2020’s election.

Trump wants lower rates… and a much lower dollar to make US exports cheaper for the world.

If US exports are competitive, it’s good for the economy, the markets… and people’s retirement funds.

And that, hopes Trump, is a vote winner.

Perhaps he’ll get his way.

Jay Powell insists he’s not bowing to pressure from the President (I’m not so sure!)

That’s a sign that he’s concerned about the economy.

Both in the US… and the whole world.

On Wednesday this week the Fed cut its lending rate by 25 basis points for the third time in succession, to the range of 1.5% – 1.75%.

And it left the door open for further cuts if things get worse for the economy.

As Powell put it, the Fed would respond to “any development that cause a material reassessment of our outlook.”

What markets have latched on to is the Fed’s slight tweak to the language used in its policy statement alongside Wednesday’s rate cut.

“The most important part of the Fed’s statement was what the central bankers didn’t say.

“Policy makers removed language in place since the summer promising the Fed would “act as appropriate” to sustain the expansion which had been a signal that monetary policy easing was in train. The Fed had used that phrasing with each of its June, July and September statements.

“By taking away the “act as appropriate” language, the Fed is trying to guide the market not to expect more cuts for now.”

So, the market reckons the Fed is done cutting rates.

More steps to undermine the dollar

But analysts at Nomura disagree.

In a research note this week, they suggested the US is the second most likely country to resort to ‘unconventional monetary policy’ if cutting rates doesn’t do the job.

“If the U.S. economy is headed for a contraction, Nomura expects three responses: lowering interest rates to nearly zero, offering forward guidance to keep interest rates lower for longer, and initiating large-scale asset purchases. All three policies were used by the Fed during the so-called Great Recession of 2008 and its aftermath.”

Nomura suggests the Fed will be forced to cut rates to nearly zero to prop up the economy.

But it says it’s unlikely to move to negative rates.

I don’t know why.

Five other central banks have already moved into negative territory: the European Central Bank (ECB) and the central banks of Japan, Sweden, Switzerland and Denmark.

Nomura believes the Fed won’t do it… because it would risk capital flight from US dollar investments.

But I say that’s exactly what could happen if nothing else is working – and what could spark a huge run on the dollar.

The point is, if the Fed moves rates to near zero, as is likely, and it fails to stimulate growth, they’ll be forced to bring in new, desperate measures.

First, they’ll fire up the printing presses to create loads of new dollars with which to buy bonds to expand its balance sheet.

In fact, it’s already doing it.

On 8th October, Powell announced that the Fed would “resume purchases of Treasury securities in an effort to avoid a repeat of recent turmoil in money markets.”

That was even BEFORE the fed had decided on the latest rate cut.

The intention is to add liquidity to the financial markets and keep the economy running.

But at the same time, creating more dollars lowers the value of the dollar.

Especially, as John Stepek in MoneyWeek points out, the Fed is “printing more than other central banks.”

“That’s probably the most important point. But if you then look at other factors – a bit more political stability in both sterling and the euro, assuming Brexit gets sorted in the next few months; plus concerns about the potential for a relatively left-wing government to take over in the US next year – and suddenly, the odds of a weaker US dollar look quite high.”

In the longer term, the move could be more profound.

I’m not buying the idea that the US-China trade war is going to be resolved any time soon.

This from FXStreet earlier: “Citing a Trump administration official with direct knowledge of the matter, Reuters reported that ‘phase one’ of the United States (US)-China trade deal may not be signed at the APEC summit in Chile in November.”

The world’s war against the dollar

In fact, I expect US-China relations to deteriorate. And not just on trade… but in terms of currency manipulation.

China wants to end US dollar dominance. It wants its own currency, the yuan, to be the world’s reserve currency.

And it’s not just China seeking to undermine the dollar’s supremacy, as CNBC reports:

“The U.S. dollar has been the world’s major reserve currency for decades, but that status could come under threat as “very powerful countries” seek to undermine its importance, warned Anne Korin, from the Institute for the Analysis of Global Security.

“Major movers” such as China, Russia and the European Union have a strong “motivation to de-dollarize,” said Korin, co-director at the energy and security think tank, on Wednesday.

“We don’t know what’s going to come next, but what we do know is that the current situation is unsustainable,” Korin said. “You have a growing club of countries — very powerful countries.”

China is playing a key role here – especially when it comes to the dollar’s position as the main currency for global oil transactions.

CNBC: “In recent years, China has tried to internationalize the use of its currency, the Chinese yuan. Such moves have included the introduction of yuan-denominated crude oil futures and reports that China is preparing to pay for imported crude in its own currency rather than the U.S. dollar.

“Yuan-denominated oil futures — also referred to as “petro-yuan” — could serve as an early warning sign for the dollar’s waning dominance, Korin said.”

And did you see the news last week about China’s new support for blockchain and cryptocurrencies?

“China is preparing for the launch of its own state-backed cryptocurrency by removing online posts claiming that blockchain technology is a scam.

“It marks a significant shift in the country’s policy towards blockchain and comes just days after President Xi Jinping hailed it as an “important breakthrough” that should be developed.”

Michael Mac at the Crypto Traders’ Academy commented on this earlier in the week for academy members:

“Ultimately what they [Chinese government] really care about is challenging the Dollar’s supremacy as the global reserve currency. A key plank of their strategy is to release their own currency, i.e. a Government stable coin or blockchain based digital Yuan.”

Well, the crypto market sat up and took notice.

And Michael is priming his members for how to take advantage of what he believes is coming. (You can join them here on a no-risk trial basis and get his insight.)

It’s all part of the same big story…

A challenge to the traditional financial system, whether it’s the dollar as global reserve currency… or mainstream assets as the go-to place to invest your money.

We wait to see whether the stock markets will continue to reach new highs in the weeks ahead.

Meantime, gold and cryptos are proving to be fantastic alternatives. You should consider exposure to both.