Light: the investment story of a lifetime 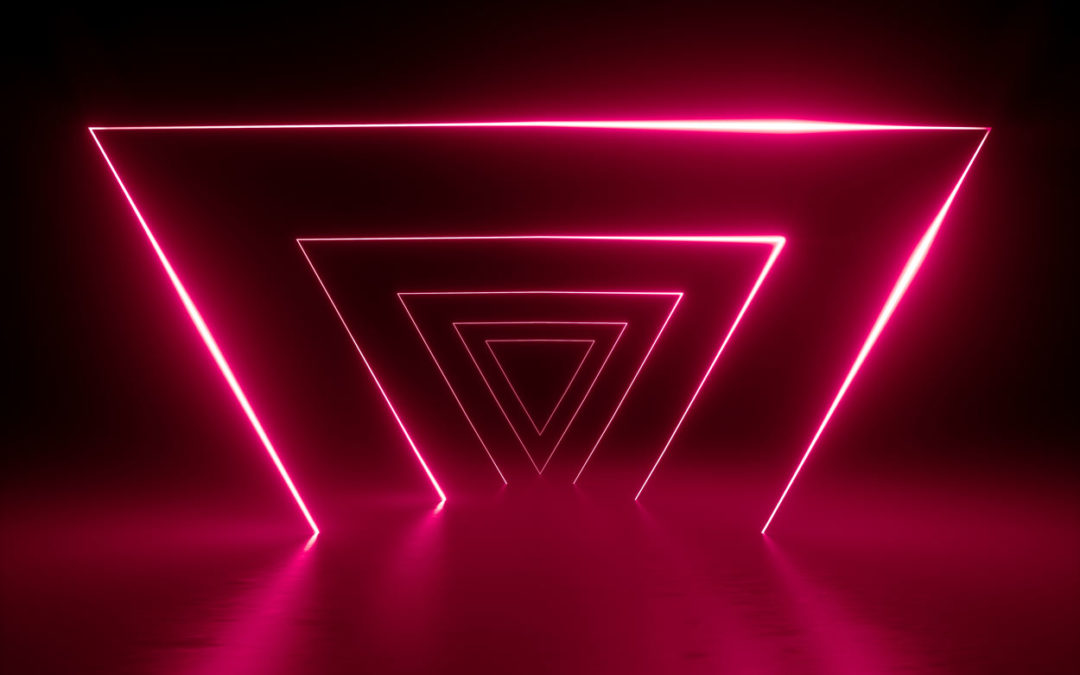 Mary Lou Jepsen was in her 20s, studying holograms at Brown University, when she was sent home to die.

For months she had been experiencing the most terrible headaches.

She would be walking around campus when a sudden wave of exhaustion would wash over her.

She began to feel the left side of her face freezing.

It took months before doctors recommended that Jensen take an MRI – a procedure that cost thousands of dollars.

When a generous professor finally put up the money, the MRI revealed a dark mass at the base of her brain, a tumour that had probably been growing since childhood.

With more funding, the tumour was removed in a successful operation.

A brush with death

Jepsen made a full recovery, completing her PhD and starting her first startup within six months of the operation.

And she has gone on to do remarkable work since then.

She co-founded the One Laptop per Child project – making $30bn for its partners and spreading computer literacy across the developing world.

She became a professor at MIT…

She spent time on secretive projects for Google and Facebook.

But Jepsen never forgot the experience of waiting for an MRI.

These two-ton machines were incredibly expensive to operate. And they were just so clunky.

You were feed into the machine, your head placed between two strong magnets as radio waves passed through your grey matter – just to produce grainy pictures for clinicians to pour over.

So recently, Jepsen started a project called OpenWater, to find a new way to do medical imaging.

Jepsen set out the whole story in a superb Ted talk a few months ago. You really should watch it to see the full demonstration. 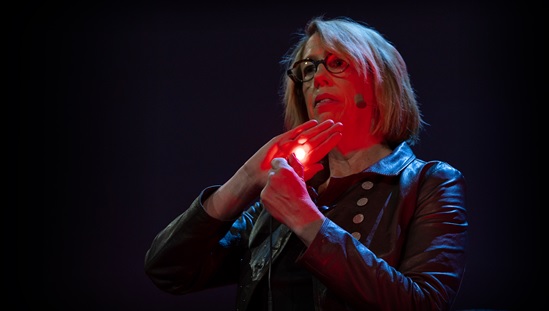 Everywhere we are, says Jepsen, we are surrounded by infrared light.

It passes though us without causing cancers, tumours or disturbing our biology.

In fact there are many health benefits to this light.

It can improve blood flow.

But the really interesting thing is that it passes through skin easily.

Just think of what happens when you put a flashlight in your mouth: all of the skin around the mouth lights up.

Now think of how you could use infrared light to light up many of the main organs of the body – your lungs, your liver, your heart, your brain.

By training red light on the brain for example, we can look deep inside to pick up high resolution images of tumours or damage caused by Alzheimer’s’ or Parkinson’s.

The device emits an ultrasonic ping that arrives just before the infrared light. The light then changes colour as it moves past various structures in the brain relaying pings – just as a siren changes pitch when it moves past.

The resulting image, says Jepsen, has a far greater resolution than an MRI.

So far she has tested prototypes of this device on rats, mice and chickens.

And now OpenWater are getting ready to test on humans.

Her plan is to make portable, miniature imaging machines that everyone can afford. These will be used to disrupt the MRI market in the US, where patients spend roughly $24 billion a year on scans (according to healthcare research firm The Advisory board Company).

But this technology could go way, way beyond that.

Let’s just take some of the immediate uses…

1. Spotting on the Onset of Neurological Disease

It’s hard to enough to get an MRI scan in the US, where there are 50 machines per million people.

Its even harder elsewhere.

There are just two machines per million Mexicans and many poor countries will have just one per city.

Jepsen says her portable infrared devices will by 99.9% cheaper than MRIs (that’s an actual estimate), radically smaller, with a resolution that exceeds that of MRIs by a factor of a billion.

But as we’ve seen with the $100-a-laptop project, she has a record of developing cheap technologies for huge populations.

Ultimately, she says these machines could be used for early diagnosis of neurological diseases – a safe and cheap way for you to scan, screen and check the health of your major organs.

Picture yourself passing a red light over your head and body, and feeding the information to an app on your phone for a quick check up.

You could watch the effects of a drug taking hold.

The other thing about light is that it can be focused.

Flood someone with infrared light and a tiny minority of rays will pass through unimpeded. This is known as “ballistic light”.

The other rays will scatter – though this process can be reversed using holographic techniques says Jepsen.

We can focus the light – tracing the folds of tissue to create 3D images of the brain to create images with surprising resolution.

Neurons range from 4 to 100 microns in diameter.

This makes them invisible to MRIs, CAT scans and PET scans.

These infrared devices can see much further.

And by training light to a finer resolution, we might even be able to stimulate neurons – literally training a laser on specific areas that have been damaged by disease or aging.

3. Reading your state of mind

This is where the story gets a little strange.

In a fascinating talk at the Long Now foundation last week, Jepsen laid out the roadmap towards “practical telepathy”.

And by that she means: using machines to model what is going on in our brains.

What we are visualising from one moment to the next.

But MRI scans already give a very good picture of the emotional state of a patient.

Put your head in an MRI machine, and we can tell if you are angry, petrified or comfortable.

In studies where people are fed stimuli – made to watch videos or look at gruesome pictures for example – we can chart the parts of the brain that light up and how we are responding emotionally. 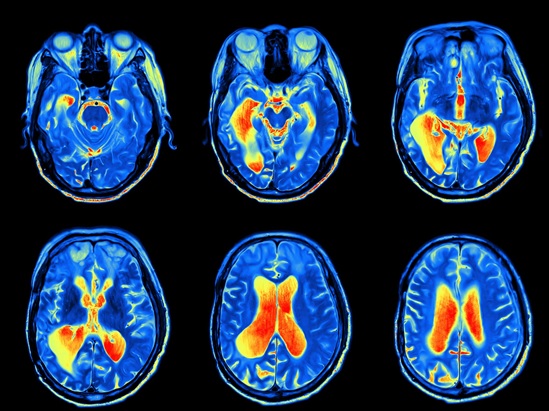 How far could we go with a machine that can record our brains down to our very neurons?

Jepsen speaks about the possibility of mind-machine communication.

Machines that read our state when we walk into the room.

Machines that could look, in time, screen for violent thoughts.

UC Berkeley’s Jack Gallant has already built a system that generates grainy images of what people are actually seeing, whether it be a video or a picture.

The catch is that to calibrate the system, you first have to spend hundreds of hours watching YouTube videos in an MRI tube.

But that’s something a sizeable proportion of the population is doing already.

Light: the great investment story of our time

This stuff is fascinating and I’ll be watching the progress of OpenWater very closely over the next year.

Right now, the devices are in the early stage of development.

But Jepsen isn’t the only pioneering scientist who is making enormous breakthroughs with light.

I’ve following pioneering work in a host of fields.

Google cars for example, have clocked millions of miles, using spinning rooftop lasers to create high-resolution images of each city they pass through.

These images have been used to create rich 3D models of entire cities.

And now self driving cars, mounted with laser firing LiDARs and radar systems, can negotiate our cities, using lasers to approximate distances between cars, road and other strange obstacles.

Electronics group TDK has one of the most impressive sensor portfolios in the world covering temperature, pressure, motion and sound sensing with offerings for the car, robot and smart phone sectors.

3D sensing which involves, one way or another, bouncing lasers signals off objects to detect and identify them, is also vital to facial recognition.

The clear leader in smart phone cameras and image sensing is Sony, whose image sensors are at the heart of the iPhone 8 and iPhoneX and are based on an imaging sensor design which can handle 960 frames a second.

Meanwhile, many authorities are using face recognition technology for mass surveillance – in crowds, in public spaces, to stamp out dissent, to

There are several face recognition stocks that I follow closely.

Because this is a huge story…

The way we use light…

The way we can manipulate it, focus it, use it to sense and understand almost anything in our environment…this is a huge investment story.

And there are a whole host of investment opportunities that I will follow up on here in Monkey Darts.

The Mary Lou Jepsen talk is definitely a great place to start.

You can view a short Ted Talk here.

Or take an hour and listen to her recent presentation to Long Now.