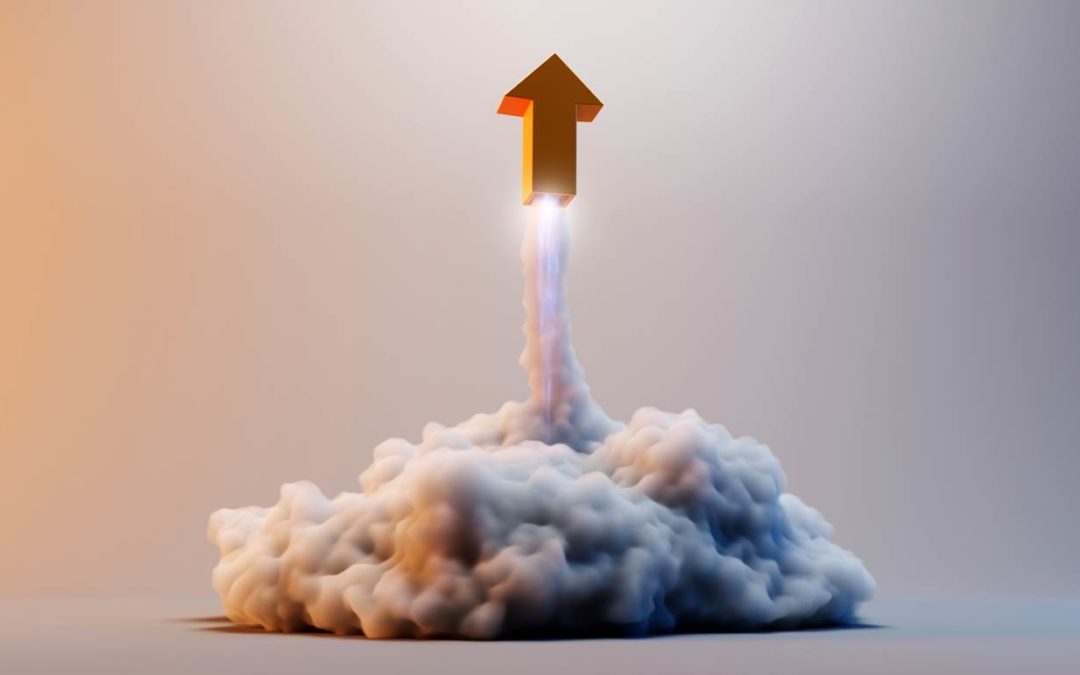 There’s a lot of talk about the market being in what’s known as a ‘melt-up’ phase.

It’s a term that’s been doing the rounds a while now.

I remember hearing a well-known American newsletter analyst, Steve Sjuggerud, talking about it back in 2015… maybe even before.

But it stayed largely within his readership… until more recently.

Since the start of 2018, the idea’s been picking up steam.

And lately it’s been cropping up more in searches lately, according to Google Trends:

Co-founder of US asset manager GMO, Jeremy Grantham’s been all over it since the turn of this year.

According to MarketWatch, in a research note Grantham warned investors to“be prepared for the possibility of a near-term “melt-up” that would likely set the stage for a burst bubble and a stock-market meltdown.”

Given his track record (he called the 2000 and 2008 market crashes), Grantham’s interest has lent some serious weight to the melt-up idea.

And now a quick search will pull up hundreds of mentions of the scenario, many from respected investors and analysts.

So, what’s it all about?

Manic euphoria before the bust

The idea is that bull markets tend to end with a huge rally that takes stocks sharply higher in the final stages… before the unavoidable crash.

Or as Steve Sjuggerud described it recently, the “final furious stage of a bull market… a period of manic euphoria”.

And it’s a market spectacle that has form…

There are examples from famous market sell-offs where the melt-up phase just before has delivered stunning gains.

Those are just the indices themselves, of course. Some of the individual stocks within those indices went up a lot more than that.

So, how’s this one panning out for the bulls?

Grantham made his call for a “near-term melt-up” on 3rd January.

He argued that even though the US stock market had been going up for nine years, it hadn’t “risen at the near-parabolic rates that were produced in the latter stages of past bubbles”.

He called for an acceleration in rising prices “to make 2018 (and possibly 2019) look like a classic bubble”.

This is the chart Grantham showed in his GMO research: 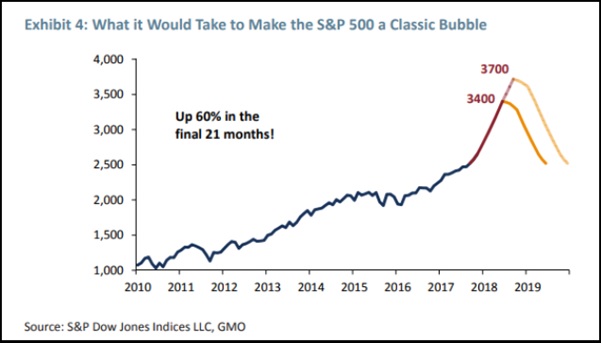 And by the end of the month, it looked like the acceleration Grantham was predicting was building steam, as the market rallied 8%.

But then came the February correction that wiped 12% off the value of the market.

That must have had Grantham scratching his head and wondering whether he’d called it wrong.

Had he unwittingly lured the market gods to play mischief and wreak havoc?

But after that scare, yet again the market resumed its march higher, reaching 2,940 on 21 September.

Since then, stocks have been sliding again, yesterday hitting 2,651 in the S&P.

That’s a 9.8% drop from the September high – just shy of the 10% definition of a correction.

Again, scary stuff for ordinary investors looking to make a stress-free buck over the long term in the market.

That’s when we can start coming out with the “told you so” headlines about our apocalyptic calls!

China is the fly in the ointment

And the way I see it, there’s plenty that could happen in the next few months to drag markets lower.

Nowhere in the bullish melt-up commentary have I seen talk about the threat of China.

But the immense levels of debt that have been building up over the past 20 years and look set to blow as global interest rates accelerate higher.

It’s an accident waiting to happen – and one that could have a savage impact on world markets when it starts to unravel.

It could be the fly in the ointment the “melt-up” crew are avoiding talking about.

Capital Economics sent out a warning on Tuesday:

“In light of our forecasts that China’s economy will continue to lose momentum, and that the U.S. economy will slow sharply in 2019, we expect them to continue to underperform. This would be consistent with what has happened in previous economic downturns.

Chinese stocks are already in a vicious bear market, down 27% since they peaked in January.

And it was a lurch lower in Shanghai that was one of the drivers for the latest Wall Street sell-off this week.

So, what to the melt-up proponents make of the recent turbulence?

There’s no word from Jeremy Grantham yet, although I’d imagine he’ll be updating GMO clients soon (they must be asking for his latest views).

As for Steve Sjuggerud, he’s keeping a strong head.

For months he’s been planning a special one-off “Melt Up Event” which went ahead yesterday for his readers. He says they should be “all in” ahead of the coming “manic euphoria”.

Indeed, he’s been brushing off the recent blood-letting in the market, even saying it’s perfect timing for his message: it gives them a great “buy-the-dip” opportunity.

And he makes the point that in the last 12 months of the dot-com boom, the Nasdaq fell by roughly 10% or more – five separate times.

Here’s Sjuggerud’s chart of that: 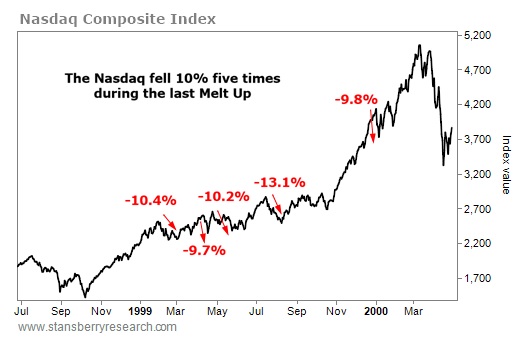 I don’t know whether he’ll be right the melt-up about this time. We’ll have to wait and see.

I have to say, he’s got a great record for making bold calls that have played out just as he predicted.

That the ‘melt-up’ has happened…

And that the top is ALREADY in… and we’re heading for a deep and prolonged bear market in stocks.

I read a great bit of analysis recently from Ben Carlson on the the always-compelling A Wealth of Common Sense blog.

He has also crunched the data on previous bubbles. And he found that in most years, there is no massive “blow-off” top (although there have been some).

Normally, the bull market ends in a whimper rather than a bang. He explains:

“This is because market tops are more of a process than an event. Market crashes can happen fast and indeed the Great Depression and Black Monday crash of 1987 are perfect examples of this. But this rarely works in the opposite direction as markets usually grind higher as opposed to experiencing gains in huge chunks.”

So, no huge surge coming then? Well it’s no dead cert, according to Carlson:

“Eventually, that elusive sell-off will occur but if history is any guide, investors shouldn’t expect to see enormous gains before we get there. The biggest gains typically come during or after bear markets or in the initial stages of a new bull market, not a blow-off top in the late stages of the bull…”

All we can do is keep looking at the evidence as it presents itself.

I don’t think there’s any need to rush out and sell all our stocks. Keep the ones you really believe in for the long term – that you’d be happy to hold through thick and thin.

If Sjuggerud, Grantham and the growing number of “melt-up” believers are right, then it makes sense to have some exposure to the market.

And according to Grantham, in a melt-up scenario, there is usually time after the peak to get out:

“The decline phase is not that much faster than the rise. They’re about symmetrical.”

But at the same time, personally-speaking, I’m not going to go all-in right now. I think the risks are too great.

Yes, the market could go higher from here.

Just as it could go lower… giving you a great opportunity to pick up the stocks you want at a far better price.

Perhaps take a small position in the ones you really want to own in case the market keeps heading higher… but save some cash for the next pull-back.