More madness in the markets

I’ve been crazy busy with the family this first week of the school holidays.

Which has left little time to get my head around things and write Monkey Darts!

So, a little break for you from my scribbling this week.

But I just wanted to check in with you and say hello. I hope you’re having a good week.

There’s so much going on.

Plenty of madness in the markets.

I don’t know about you… but I reckon it could get ugly out there. (Even more than it has been already.)

I saw one eerie stat when I was scanning the news this week.

Apparently, this has been the worst start in terms of stock market performance to the second quarter since…

Think of the worst times in stock market history…

If your mind turned towards The Great Depression, you’re dead right!

CNBC reports: “With the S&P 500 closing down more than 2.2 percent Monday, the broad market index posted its worst start to April since 1929, according to S&P Global.”

Weird isn’t it? We were only talking about that in last week’s Monkey Darts…

How the escalating tension between the US and China sounds echoes of the 1930s trade wars.

And the tension went up a notch at the start of this week. I think maybe Trump thought Beijing would back down.

But not a bit of it.

China hit back with exactly what we thought they might: the threat of a 25% tariff on two of America’s major exports to China – soybeans and aircraft.

Cue another major 700-point sell-off for the Dow on Monday.

From what I’ve read, that wasn’t purely down to tariff-talk.

It was also about Trump attacking Jeff Bezos and Amazon. (He’s not content with only fighting China!)

In a belligerent tweet on Monday he accused Amazon of not paying taxes and using the US postal system “as their delivery boy… and putting many thousands of retailers out of business”.

Of course, Bezos owns the anti-Trump newspaper, The Washington Post. That’s what his attacks are really about.

But whatever the reason, it knocked 6% off Amazon’s stock price… and that in turn fed into the negative vibes around the stock market.

One thing’s for sure… markets are moving in bigger daily clips lately, if I’m reading this chart from Bloomberg right: 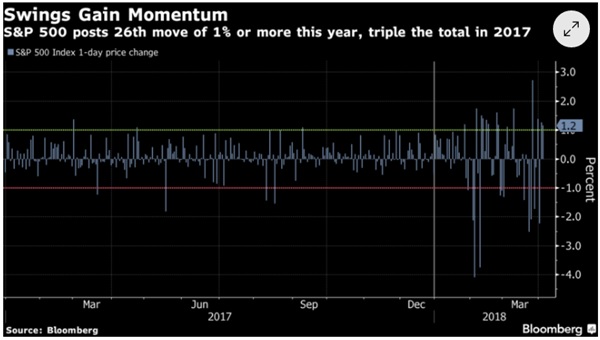 We can see that most of last year’s action was within those boundaries. But so far 2018 has been far more volatile.

And it just feels that there’s more to come like that in 2018, doesn’t it?

Markets may have calmed down since Monday’s drop.

But what more is there to come from Trump, from Central Banks, from China, from Russia?

We eagerly watch and wait.

I’ll be back from my break on Monday. Let’s pick up next week and keep trying to figure it all out.

Have a great weekend.