Mr Market hands out a timely reminder to rampant punters 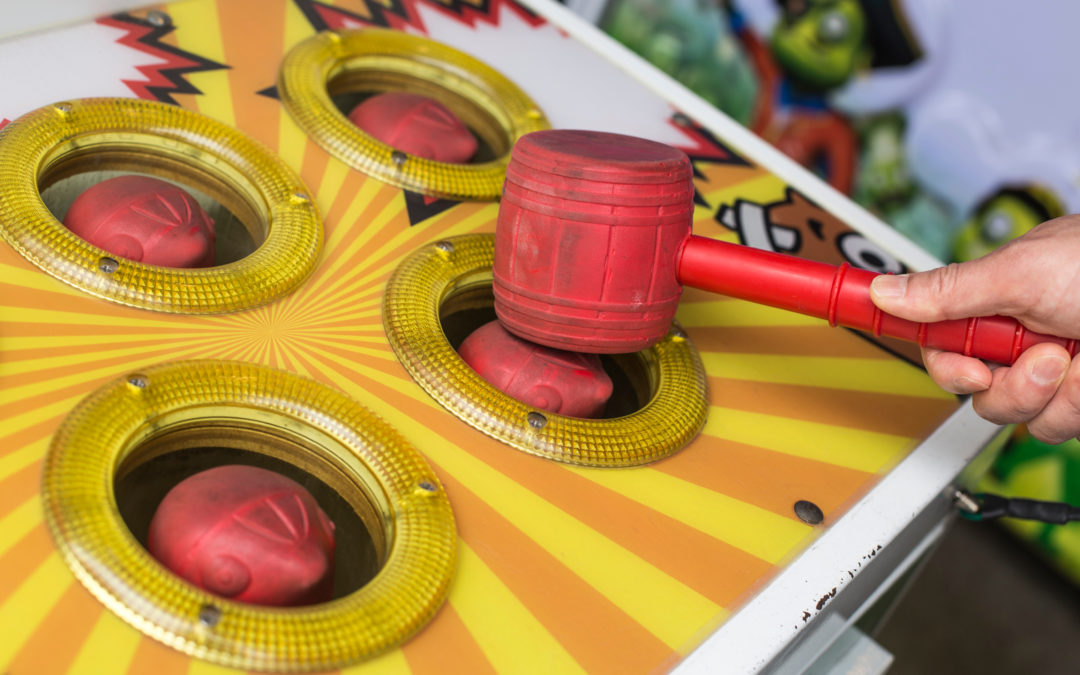 Apparently, Mr Market’s not quite ready to be the one-way ticket investors want him to be.

So, yesterday he reminded them who’s boss.

So, was it just a healthy correction in an overheated market before the rally resumes… or the start of something more ominous?

Well European markets are bouncing back this morning. But let’s see if US traders can follow through later.

For now, the more immediate question is: What’s changed to make investors hit the sell button?

Not much on the face of it.

At least nothing that should spook investors – quite the reverse, in fact.

On Wednesday the Fed boss, Jerome Powell, promised the world rate hikes are off the table for the foreseeable future.

“We are not thinking about raising rates,” said Powell in a virtual press conference.

And to ram the point home, he emphasised: “we are not even thinking about thinking of raising rates.”

Well normally, that kind of stuff is music to the ears of investors.

Especially when it’s backed up with this kind of bold statement:

“Economists were shocked on Friday as the Bureau of Labor Statistics said US employers added 2.5 million payrolls in May, defying expectations of 7.5 million jobs lost. The surprise increase came on the heels of the record 20.5 million jobs lost in April.

“The unemployment rate declined to 13.3%, bucking forecasts of a near-record 19% rate. April’s 14.7% reading was the highest since the Great Depression of the 1930s.”

This time last week in Monkey Darts, we were contemplating a possible “double top” on the US Nasdaq 100 technology index.

If it had played out, it pointed to a possible big collapse in tech stocks – and the wider market.

But instead, that strong jobs report was enough to send markets screaming higher…

The Nasdaq jumped to a new record high, some 400 points or 4% above February’s previous peak… before Covid-19.

So, why the big change yesterday and a market-wide sell-off?

Well, Fed chief Powell obviously isn’t as confident in the economy as traders appeared to be last week.

He said he doesn’t care much about asset prices and whether they are too high or too low – that’s not the Fed’s role, he said.

He does care – that’s why he threw a massive bucket of cold water at markets to cool them down.

“Unemployment remains historically high. My assumption is there will be a significant chunk … well into the millions of people, who don’t get to go back to their old job… and there may not be a job in that industry for them for some time.”

In other words, Powell is not expecting the economic bounce-back that many investors have been betting on.

Joseph Brusuelas, chief economist at the US arm of accountancy group, RSM, agrees:

In Wednesday’s press conference, Powell stated as much.

“This is going to take some time,” he said, referring to a recovery in the economy.

A change of tune

It’s a strong sign of the damage Covid has done that Powell’s changed his tune so much.

Just think, back in December, the Fed was predicting 2% growth in 2020 and an unemployment rate of 3.5%.

At Monkey Darts, we’ve long been sceptical of that growth target, suggesting a recession is way overdue.

And as the BBC reports, Covid has “dramatically rewritten” the Fed’s outlook.

20 million US jobs were lost in February and March.

As for economic growth this year, forget it, reports the BBC:

“The OECD on Wednesday said the pandemic had triggered the most severe recession in a century and warned that the global economy could contract 7.6% this year, should a second outbreak hit.

“Predictions released by the Fed on Wednesday show policymakers expect the US economy to shrink 6.5% this year and the unemployment rate to be 9.3%, before falling to 6.5% in 2021.”

So, it looks like Powell tried to set a balanced tone.

He wanted to let some hot air out of the market by making it clear there’s more hardship to come in terms of the economy.

But at the same time reassuring traders he has “all tools” at the ready to keep the economy alive.

Was he was expecting to see a 7% dump in the stock market?

And he’ll probably be on the receiving end of a bitter tweet from Donald Trump for causing it!

What happens if the punters stop buying?

But chances are, the overriding message that traders will take from this is that Powell’s there behind them… and they’ll start buying again.

Especially this new and growing army of speculators that Josh Brown at The Reformed Broker talks about:

“Popular sports commentators (and their legions of followers) have pivoted to playing the stock market in the absence of games to bet on. We haven’t seen this much excitement from retail investors in 20 years. I was there last time, there are a lot of similarities but valuations are more reasonable and there are way less IPOs dumping new shares on us now. New brokerage account openings are skyrocketing. Fidelity is running ads on active trader subreddits. Barstool’s Dave Portnoy has introduced perhaps hundreds of thousands of young men to the game they never knew they could love.”

Check out this chart showing how trading volumes on the Nasdaq have exploded as speculators chase the tech bull market. 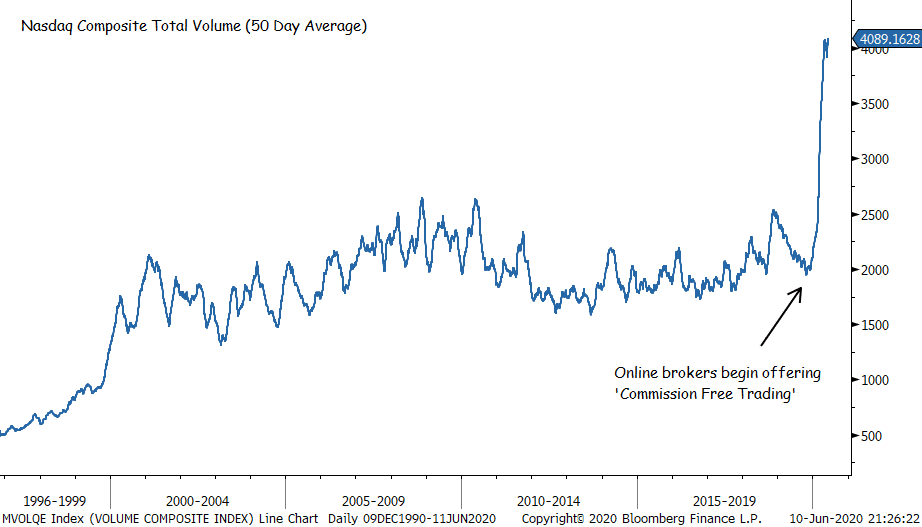 If this crazy market is being driven by gamblers jumping on the bandwagon… it could take a hit when they decide to jump off.

But there’s a bigger problem for investors.

What happens if whatever the Fed chucks at the market isn’t enough?

No one has any idea how much damage this virus will end up doing to the global economy.

There are likely to be widescale bankruptcies in retail, airlines and hospitality businesses as consumers continue to avoid spending their money in this uncertain environment.

Ultimately, it could lead to global deflation – a central banker’s worst nightmare.

The threat of deflation

“The next big macro challenge for the equity market will be the realization in the next couple of months that the US is going into outright deflation with core CPI inflation year-on-year going negative.

“Both headline and core CPI inflation will go negative. I know the discussion that both supply and demand side got a hit but the recent data shows that the core CPI will fall below zero. In March CPI fell 0.4, it was only the fifth month of decline for the first time since the 1980ies. That’s huge. My calculation is that we see another couple of months like that and then we see deflation.”

On Wednesday, the latest data showed that US consumer prices fell last month for the third month in a row, according to CNBC.

Investors will continue to watch that data carefully in the months ahead.

If it turns out that we are entering a deflationary spiral, where lower prices lead to even lower prices, that’s a serious problem. Not just for the US… but for the rest of the world… and its markets.

If prices are falling, that’s not good for business. And ultimately, it’s bad news for stock markets.

On Bloomberg this morning, John Authers, raises the possibility that the powerful rally stock markets have seen lately isn’t for real – and the implication is that it’s not sustainable:

“Following the slide of the last three days, the S&P 500 is back below its 200-day moving average, it is more than 11% below its peak, and it never managed to regain that high. It is just about possible that this remarkable run-up has been nothing more than a bear market rally.”

If Authers is right, we can expect a further sell-off to come, perhaps taking markets down to test the March lows.

But probably not just yet…

So far today, it looks like traders are coming in to buy yesterday’s market dip.

Whether that’s a smart move remains to be seen. They could well pick up shares at far better prices in the months ahead.