Professional investors are preparing for a ‘Black Swan’ collapse 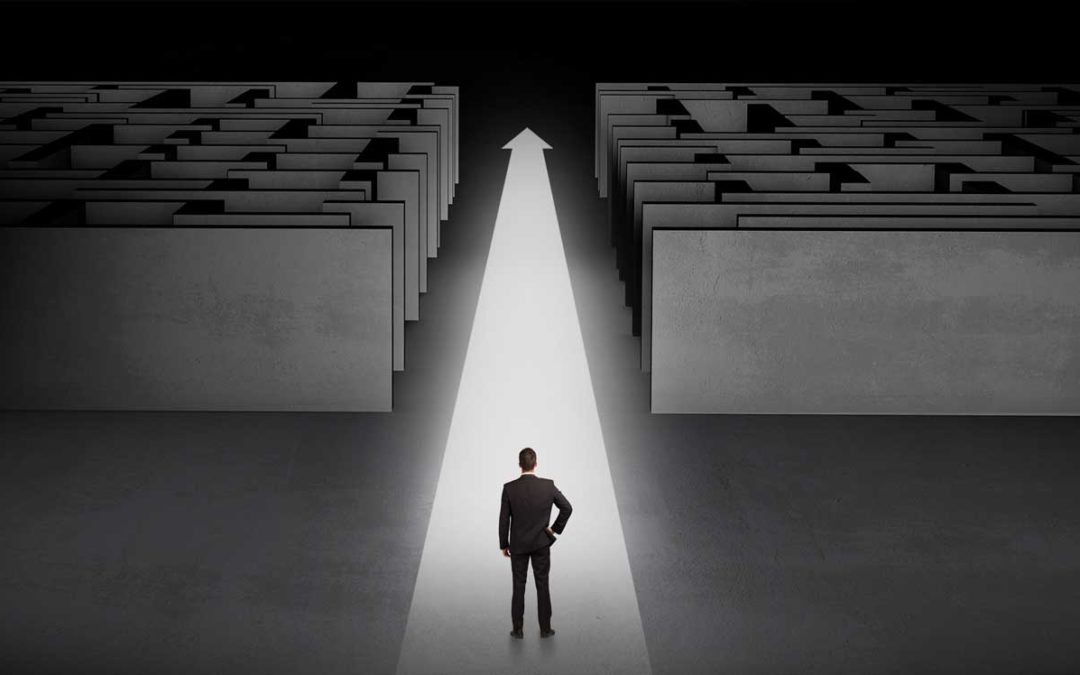 Here I am, casting stones at investors for being ‘too complacent’ and sleepwalking towards disaster…

But it turns out, they’re not that blasé about it after all – at least not professional investors.

They’re rather worried… just as I am.

We’ll get to that in a moment.

Why is the market doing THIS?

I know, I know, the US stock market is still surging…

On Tuesday the Dow Jones leapt another 185 points – apparently because China’s ‘backing down’ on its hardball trade tactics.

The broader S&P 500 index of US stocks and the tech-focused Nasdaq still have their eyes on the record highs set in August.

And the VIX is bobbing along near its five-year lows, suggesting traders are not expecting great volatility ahead.

(But as we’ll see in a minute, that’s FAR from what another mysterious indicator is telling us…)

I just don’t understand WHY!

That somehow the world economy will be immune to it. And continue to deliver strong growth.

But I’m not buying it.

Ok… Beijing says it’s going to put a 10 percent tariff on some goods instead of the previously mentioned 20 percent, reports CNBC…

But it’s not the end of the trade war.

Trump’s going to be stringing this out for years. And China’s going to give as good as it gets.

He believes the trade war could go on for 20 years as these economic super-powers vie for pole position.

Whether that turns out to be the case, we’ll have to wait and see. But even on a shorter time horizon, there’s plenty more to come.

Trump’s just this week unleashed a new round of tariffs on $200bn worth of Chinese goods.

So, the US will put tariffs on the rest of the Chinese goods coming into America – a further $267bn.

As we keep saying in Money Darts, that cannot be good for the economy – not China’s, not America’s and not the rest of the world’s.

Economic growth is going to take a massive hit.

And ultimately, that spells bad news for stock markets. Sooner or later, investors are going to throw in the towel… and trigger a major sell-off.

We’re not the only ones preparing for the worst…

It seems one in four professional investors is “bracing for global growth to slow”, according to a Bank of America Merrill Lynch survey out yesterday.

The bank said it’s “the worst outlook in this monthly survey since December 2011 and up from August when just 7% of investors were pessimists.”

And they’re making sure they’ve got protection, too, for when the fall-out starts.

To start with, they’re starting to lighten up on the stock front and move into safer, more liquid positions.

According to Bank of America Merrill Lynch’s chief investment strategist, Michael Hartnett, “investors are holding on to more cash, telling us they are bearish growth”.

If you think stock markets are going to struggle because the economy is facing headwinds, booking profits on stocks that depend on growth seems like a decent move.

Not necessarily selling everything.

But freeing up some cash, ready to deploy in stocks you have your eye on… after the correction comes.

What caught my eye this week though, wasn’t the fact that professional investors are moving to cash.

They’re taking even more decisive actions to protect their positions… bracing not just for slowing growth… but for disaster.

As I mentioned earlier, the VIX is trading near its lows of the past five years or so.

To remind you, the VIX is a volatility index.

That’s because it measures how much “insurance” traders are prepared to stump up to protect their portfolios.

If the VIX is high, it’s because people are scared and buying lots of ‘put’ options to hedge against a stock market fall. (‘Puts’ increase in value if the market falls.)

And when it’s low, it’s like investors don’t care.

They’re not worried about stocks falling. They have no fear.

They only see rising stock prices.

Well right now, the VIX is not far off its lows…

That suggests investors are complacent.

But it’s not the whole story.

Because there’s another indicator that paints a different picture.

This is the Chicago Board Option Exchange’s (CBOE) SKEW index.

As Business Insider explains, the SKEW “reflects the degree to which traders are paying a premium for out-of-the-money put contracts, relative to their call counterparts.”

So, we’re talking about options again.

If traders are paying more for puts than calls, it means they’re fearful of the market falling.

They want to make sure that if they lose money on their underlying positions… they make up for it on their options.

Roubini: “Conditions are ripe for a financial crisis”

In other words, they are hedging their positions.

And if an option is ‘out-of-the-money’, the market must make a big move for the option to increase in value.

So, these traders anticipate a BIG market move happening – and they think it’s going to be DOWN.

The SKEW Index rises when investors fear a “Black Swan” event – something unexpected that could have a huge negative impact on the market.

I read earlier that the 2010 flash crash was preceded by a historically high SKEW reading.

Right now, the index is trading near the highest level since records began in 1990. 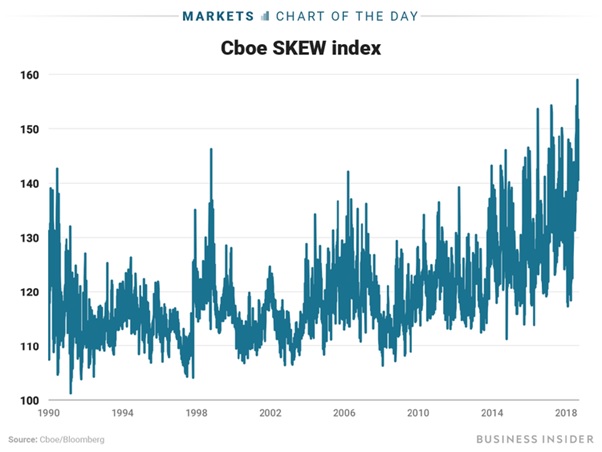 Another way of saying that is that hedging a portfolio is more expensive than ever.

Investors are indeed fearful that something nasty – they don’t know what – could come along and smash the market.

And perhaps with good reason…

Lots of big guns in the investment world are saying the same thing.

Former economics professor, John Hussman, who’s had a good track record of making big market calls over the past 15-20 years is predicting a 60%-plus fall in the S&P 500.

If he’s anywhere near close on that call, those investors with the out-of-the-money put options are going to be laughing… whilst those without will be crying.

According to Time, Dalio says his seven “favorite indicators of economic trouble are ‘flickering’ and that the stock market could be in trouble”.

And on Friday, professor Nouriel Roubini, a.k.a. Dr Doom, added his voice to the chorus of doom.

MarketWatch has the story:

“(Roubini) said conditions will be “ripe for a financial crisis” and a global recession by 2020, due to several factors, including lack of stimulus, trade wars and an overvalued stock market that’s poised to topple.”

The biggest worry, Roubini concludes, is that central bankers will be powerless to act, given the sheer scale of today’s debt levels.

At the time of the Lehman collapse that triggered the Global Financial Crisis in 2008, global debt — financial, government, corporate and household — stood at around $180 trillion.

Today it’s $247 trillion. And with interest rates on the rise… that’s an accident waiting to happen.

Roubini: “Unlike in 2008, when governments had the policy tools needed to prevent a free fall, the policymakers who must confront the next downturn will have their hands tied while overall debt levels are higher than during the previous crisis. When it comes, the next crisis and recession could be even more severe and prolonged than the last.”

We don’t know exactly what will trigger the coming market collapse… or when it will happen.

But we continue to get new signs that something MUST break.

And as the SKEW shows, smart investors are taking steps to protect themselves now…