Shutdown update: after 27 days, The US economy is imploding 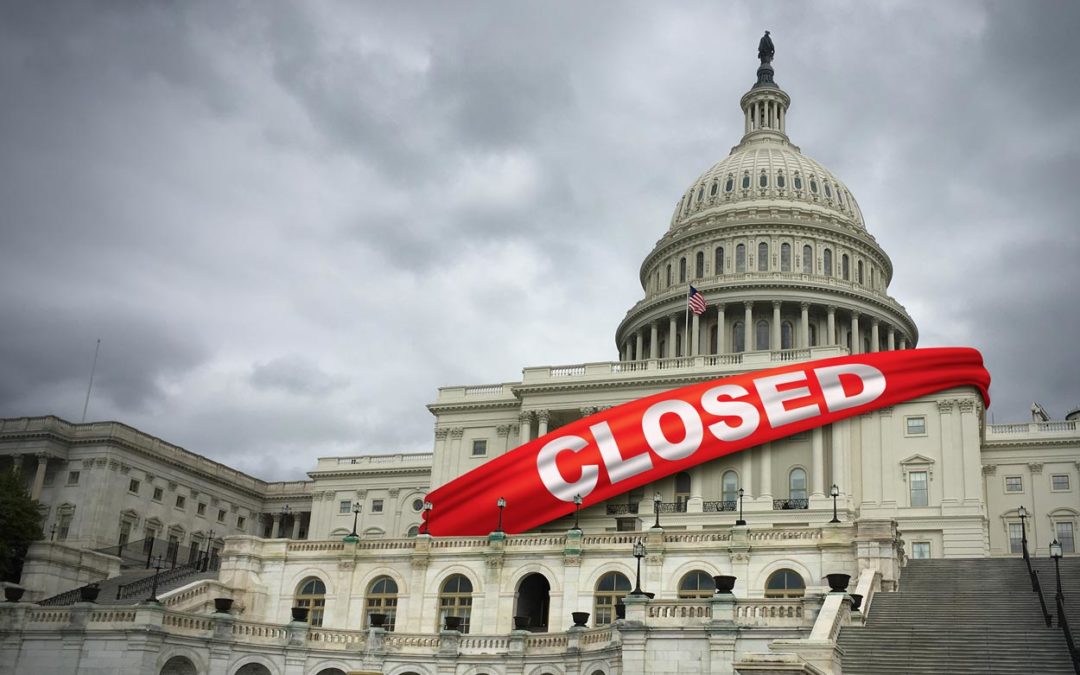 Let’s say you’re in a job you’ve been doing for 10 years.

But your employer tells you that for the next two weeks you must stay away from work.

And while you’re away, you won’t be paid.

How would you feel about this?

But it gets worse.

All work, no pay

After two weeks are up, your employer calls you with news.

From tomorrow, you must come back to work.

They need you to do your job more efficiently and rigorously than ever before.

Because there’s a huge backlog of outstanding work that needs to be processed without delay.

Only, you’re still not to going to be paid.

Would you do it? You certainly wouldn’t want to, would you – work for no money?

And – touch wood – it’s not going to happen to you.

And they don’t have a choice.

They’re being forced to do it. And without pay. By order of the boss, one Donald Trump.

It’s all to do with the ongoing US government shutdown.

I’m sure you’ve heard about it in the news…

The US Government is out of cash

The US budget process has collapsed. That means there’s not enough cash to pay for certain government operations.

The way it should work is that Congress agrees funds for the federal government.

But if there’s a stalemate between the Senate and the House of Representatives, the funds aren’t agreed.

“By the midnight deadline, the House and Senate still had not passed a spending bill appropriating money to nine federal agencies, and the government partially shut down — as it remains today.”

Government shutdowns in the US aren’t that uncommon.

But the current one is the longest ever – at 27 days.

And it’s mainly about Trump’s demands for $5 billion to build his wall to keep the Mexicans out.

The Democrats, who control the House of Representatives, are refusing to sign off on it.

And without the wall funding, Trump won’t sign off on funds needed to keep the government fully operational.

And it’s not great for all those government workers who are not getting paid.

That number totals around 800,000, from various ‘non-essential’ public sector areas: 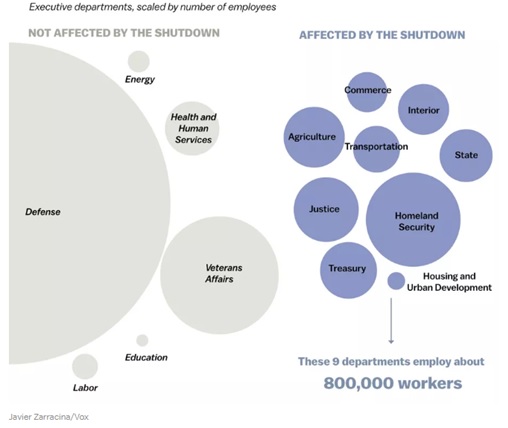 Of course, having a dent like that in the government workforce causes major problems.

Like backlogs of important processes such as tax collection for example.

The New York Times reports that “the administration on Tuesday called tens of thousands of employees back to work, without pay, to process tax returns, ensure flight safety and inspect food and drugs.”

But here’s the REAL problem…

This could tip the US into recession

According to the NY Times, the shutdown is inflicting far greater damage on the United States economy than previously estimated.

“The revised estimates from the Council of Economic Advisers show that the shutdown, now in its fourth week, is beginning to have real economic consequences. The analysis, and other projections from outside the White House, suggests that the shutdown has already weighed significantly on growth and could ultimately push the United States economy into a contraction.”

The CEA is Trump’s own team of economists.

But they’re not the only ones concerned.

Thorn in Trump’s side, Fed Chairman Jay Powell, is also fretting about it.

Last week during a meeting at the Economic Club of New York, Powell said:

“In the short term, government shutdowns don’t last very long. They typically have not left much of a mark on the economy, which isn’t to say there’s plenty of personal hardships that people undergo.

“A longer shutdown is something we haven’t had. If we have an extended shutdown, I do think that would show up in the data pretty clear.”

What does Powell mean by that?

He’s talking about what effect 800,000 government-related employees not being paid might have on the economy!

I mean, let’s say you normally get paid $1,000 a week for doing the 9-5 at the department of justice or homeland security.

That’s a lot of money being spent by the workforce.

Figures from 2013 show that federal workers reduced their spending by 10-15% while they were unpaid during that year’s shutdown.

If consumer spending takes a hit, so do the businesses that money would normally go to… and so does the economy.

According to the New York Times, the “effect on federal workers’ spending plans is particularly worrisome for the automotive and housing markets, which were already showing signs of trouble before the shutdown.”

This could soon filter through to the stock market

And when investors figure that out and start thinking about the effect on corporate earnings, stock prices are going to take a hit too.

Markets have been trying to go higher.

I was surprised to see that this week the S&P 500 managed to poke its nose above the important 2,600 level we’ve been talking about recently in Monkey Darts.

To remind you, that’s a technical level on the chart that had provided solid support until it broke down through it on 16th December.

I was expecting the market to struggle to break back above 2,600. But for the moment at least, it’s managed it.

Not that I’m convinced it will stay up for long!

And problems like this government shutdown could end up being the things that spook investors – especially if it drags on.

Business Insider has a roll call of analysts thinking along the same lines:

“Bank of America Merrill Lynch reiterated their concern about the economic cost of the shutdown on Wednesday. “It [the shutdown] definitely becomes a significant shock if it lasts for months rather than weeks,” Ethan Harris, head of global economics research at Bank of America Merrill Lynch, told the Financial Times. “There is a sensitivity in the markets to signs of dysfunction in Washington.”

And some other negative thoughts from experts that Business Insider mentions:

“Standard & Poor’s pointed out that the cost of the shutdown will soon outpace Trump’s $5 billion demand for a wall.

JPMorgan CEO Jamie Dimon said Tuesday that the shutdown is a serious problem for the US economy and cited research that showed US GDP growth could go to zero if the shutdown continued.

Pantheon Macroeconomics’ Ian Shepherdson was even more bearish, warning that if the shutdown lasts through March, then the US’s first-quarter GDP could be negative.

Another major concern is the possibility that the shutdown impacts the US’s credit rating. During the 2013 shutdown fight over the debt ceiling, the US was downgraded to AA+ by S&P, a historic first for the country. While Fitch maintained the US’s AAA rating in 2013, James McCormack, the agency’s global head of sovereign ratings, warned that a downgrade was possible in 2019.”

OK, well those threats to US GDP are scary enough – and could cause investors to freak out.

But that last point is potentially even more serious…

Credit downgrade could crash the market

A US sovereign credit downgrade from Fitch or Standard and Poor’s?

That’s got “Bear Market Accelerator” written all over it!

And don’t forget, this is all on top of the already existing threats to the market…

Like the ongoing trade wars with China, where there is no resolution in sight.

Like the fact that central banks around the world are draining liquidity from the system at a time when the economy is starting to creak and grown.

Like the fact that Europe is facing growing political and economic turmoil.

I don’t see many reasons for the stock market to be going higher, do you?

Remember, the S&P dipped into the bear market zone on Christmas Eve, when it fell to 20% below the September peak.

But the 20% bear market line was breached.

If this rally is simply a pull-back in the down trend as I think it is, it won’t be long before prices head lower again.

And not just in the US…

If there’s another substantial lurch lower in the Dow and S&P, it’s bound to drag the FTSE and European markets with it.

Meanwhile, the price of gold – the ultimate ‘safe-haven’ asset – is also flirting with important technical levels.

Gold looks like it’s preparing to test the $1,300 technical level.

If it breaks through it convincingly, the chances are stocks will be headed lower as the bear market resumes.