Step into the One Minute Clinic

The clinic is tiny, barely bigger than a photo booth.

You step in and a doctor instantly greets you on screen.

What are your symptoms?

The doctor listens and offers a rapid preliminary diagnosis based on your medical history and what you’ve told him.

When you step out, the medicine is there for you to pick up.

This “One Minute Clinic” (pictured below) was showcased by Ping An Good Doctor last year and they are spreading quickly across China.

It’s a fascinating development for medicine. 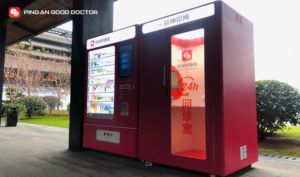 The cubicles contain ‘smart’ medicine chest vending machines from which you can buy the appropriate non-prescription medicine and which in many cases will be fit for purpose.

It will include upwards of 100 common medications.

If they don’t have your pills in stock, prescription medicine can be organised via the Ping An system as well as further medical help if the ‘One Minute Clinic’ session proved too limited.

Just last week, Ping An Good Doctor announced that it had placed its One-minute Clinics across 8 provinces and cities in China and signed service contracts for nearly 1,000 units, providing healthcare services to more than 3 million users.

Are good are AI doctors really?

I’ve been following this story for some time.

And I think it’s a sign of what is coming in healthcare. Just take the success of UK-start up Babylon Heath.

Babylon’s GP-app (pictured below) is already very popular here in the UK. 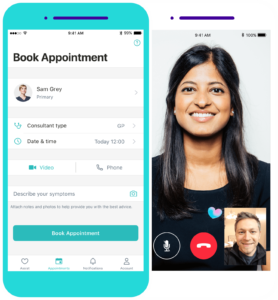 “At its core is a simple idea: let patients hop on a video call with a GP rather than wait for an in-person appointment. Patients can use the app’s chatbot to talk through their symptoms and consultations with a doctor are free if you make GP at Hand your registered GP practice. Video chats are available 24-hours a day and Babylon says they are usually available within two hours of booking.”

The company doesn’t release user numbers, but its two NHS apps have been downloaded by more than 110,000 people from Google’s Play Store.

The remarkable thing about Ping An’s One Minute Clinic, is the use of artificial intelligence to give advice.

Launched in 2015, the Good Doctor has been providing free diagnosis, treatment and online appointment booking through an app.

Like Babylon, it enables users to communicate with health care professionals through text, photos, and video.

“For example, one doctor can provide consultation services to five patients per hour. The number of patients will jump to 40 with assistance from AI,” said CEO Wong Tao.

The early evidence about these AI-assisted doctors is that they are working well for customers with common complaints, although there are concerns about the quality of diagnosis.

The research looked at 23 English-language symptom checkers and determined whether they listed the correct diagnosis first or within up to 20 possible options.

For the symptom checkers that then offered a care recommendation, the academics also looked at the type of healthcare recommended.

The work concluded that 34% of the time the checkers managed to make the correct diagnosis.

Within the top 20 diagnoses given, they were correct 58% of the time. Care advice was correct almost two-thirds of the times (ranging from 33% to 78%).

The big changes are going to come when the big tech giants move into healthcare, using their fast improving artificial intelligence to deliver diagnoses, tests and treatments to their massive user bases.

Part of the reason Amazon might excel in health is data. Just like Ping An, the company already has a mountain of data on people and their shopping and buying habits, and that could be used to help serve their health needs.

If Amazon launched a healthcare division – Amazon Prime Heath – it could deliver fast medicines and diagnoses to a massive population.

And it could use it’s artificial intelligence resources to deliver increasingly personalised healthcare.

That won’t be easy.

IBM was one of the first to enter in medicine, making huge claims for Dr Watson and it’s abilities as a clinician.

“Reputationally, I think they’re in some trouble,” says Robert Wachter, chair of the department of medicine at the University of California, San Francisco, and author of the 2015 book The Digital Doctor: Hope, Hype, and Harm at the Dawn of Medicine’s Computer Age.

“In the eight years since, IBM has trumpeted many more high-profile efforts to develop AI-powered medical technology—many of which have fizzled, and a few of which have failed spectacularly.

The company spent billions on acquisitions to bolster its internal efforts, but insiders say the acquired companies haven’t yet contributed much.

And the products that have emerged from IBM’s Watson Health division are nothing like the brilliant AI doctor that was once envisioned: They’re more like AI assistants that can perform certain routine tasks.

The Doctor in your home

But Amazon is very serious about moving into this space.

And just as with retail, food, devices…it is likely to completely shake up the industry.

Amazon made its first foray into healthcare through pharmacy by acquiring the internet pharmacy start-up PillPack in the summer.

Pharmacy experts told CNBC that the easiest thing Amazon could do is focus on the small but growing segment of people who pay cash for their medicines.

That’s already more than a billion dollar market, and accounts for about 6 percent of the U.S. population, including those who lack insurance or have deductible plans.

But Amazon is likely to be far more ambitious.

And they’ll continue to make inroads from there. In the last year alone, Amazon has…

Started up its own employee health clinic.

Announced a product to mine patient medical records.

Most interesting of all…Amazon recently filed a patent for its Alexa voice assistant to pick up on a cold or a cough. 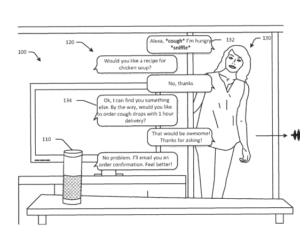 This technology would allow Alexa to pick up on the sound of the user’s voice or breath, to see if they’re sleepy or crying, or sick.

So imagine you have a sore throat.

You let Alexa know, and it responds by asking if you want to book an appointment at the doctor’s office or get a virtual consult. You pick the virtual option, and the doctor through Alexa asks you about your symptoms.

Alexa decides to send a courier to your home with a tiny portable device to do some basic tests for things like strep throat.

The strep test is positive, so the virtual doc sends over a prescription for an antibiotic.

All this happens within a few hours, and you never need to leave your house to sit in a medical office or stand in line at the pharmacy.

People armed with smartphones and sensor laden wearables will generate continuous insights about lifestyles, activities and habits to brief doctors about individual cases, and also feed info into global datasets.

And there will be a host of opportunities to follow. More on those in a forthcoming issue of Monkey Darts.