The no.1 most important concept in investing 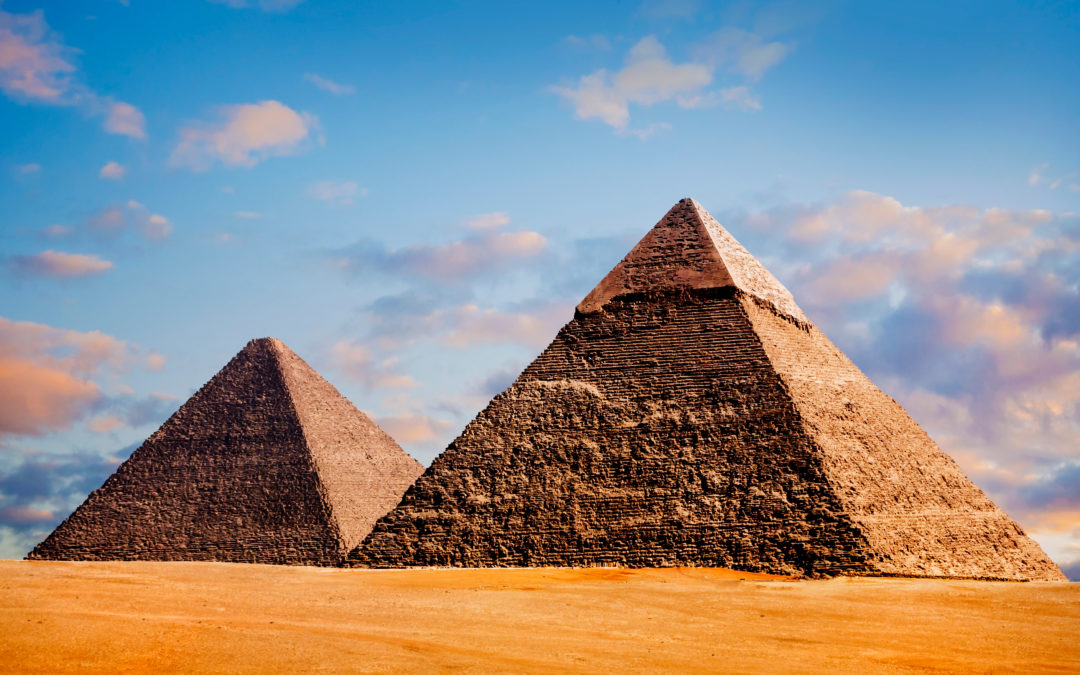 I read a thought-provoking piece on risk this week.

It was about how a terrible event changed one man’s outlook on life and how he thinks about risk.

And it absolutely reinforced something I’ve always known to be true about investing.

That is, that you need to position your money so that no one single stock… or theme even… can do too much damage to your wealth if it goes bad.

And that having a decent mix of uncorrelated assets is the best way to invest.

That’s what diversification is about – i.e. spreading your risk across several different investments.

The art of spreading risk

People have different views on diversification.

Some think you should spread risk across every asset class. And within each asset class, spread it amongst lots of different investments.

And others say it’s a mug’s game and a sign of weakness.

For example, Warren Buffett, one of the world’s most successful investors famously said:

“Diversification is a protection against ignorance. [It] makes little sense for those who know what they’re doing.”

And if you’re as smart as he is – and with as much money as he has – perhaps you can take that attitude.

But most of us aren’t.

And anyway, when you dig into it, it’s not like Buffett owns just one stock.

His Berkshire Hathaway holding company owns majority stakes (i.e. more than 51%) in something like 50 companies.

And then it has minority stakes in dozens of other companies, including Apple (his biggest holding), Coca-Cola, American Express, Johnson & Johnson, General Motors and Teva Pharmaceuticals.

Lots of investments – and across a decent spread of industries.

Buffett’s point is to not spread yourself so thin… across so many different investments… that you can’t give your portfolio the attention required.

It’s like another investment legend, Bernard Baruch, put it:

“It is unwise to spread one’s funds over too many different securities. Time and energy are required to keep abreast of the forces that may change the value of a security. While one can know all there is to know about a few issues, one cannot possibly know all one needs to know about a great many issues.”

So, the sensible idea is to select a range of stocks/assets to get exposure to investment themes you strongly believe in.

Not too many that you can’t keep up on them.

But at the same time, not too few that you MUST be right.

Yesterday I was listening to a presentation by a guy I’ve respected for many years for his investment insights.

His core message was that he does NOT diversify.

In fact, he has just one investment idea right now, which is to buy gold.

And he has so much belief in it, it’s all he’s doing with the bulk of his money right now.

“I hate diversification,” he says.

To him, unless you “go all in”, then you don’t have real conviction.

“If you diversify, it’s like you’re betting on loads of different outcomes. It’s a bit like backing every horse in a race.”

Well, I see what he’s saying.

But frankly, it’s not an approach I’d be prepared to take.

What if the idea turns out wrong?

What about missing out on other opportunities that turn out right?

Perhaps this chap is right when he says that by diversifying, you’re accepting the general return of the market…

That you’re not going to beat the market.

That’s certainly the case if all you do is buy a market tracker fund or buy all the stocks in the market – you cannot beat the market.

And in fact, you’re likely to perform worse than the market due to the fees involved with owing all those stocks.

But at least your money will rise and fall with the market – and markets tend to go up over the long term, right?

And at least you’re not betting everything on one roulette spin.

What they teach in the City about risk

Years ago, I went on a City-based training course to learn about investments.

From what a stock or a bond is… to who regulates all the different markets… to how options, CFDs and interest rate swaps work… right through to how to set up a trust for your grandchildren to shield their inheritance from the tax man.

And loads of stuff of varying degrees of dullness in between.

Many of the things they told us about have never cropped up again in my professional life.

But the risk stuff is etched in the mind.

That’s because it’s so relevant and important to anything you do in the investment world.

So, you learn about the varying perceived levels of risk associated with different assets.

Supposedly, cash is the least risky.

Then government debt – based on the assumption that the government will never go bust and will always repay what it owes. (Which seems to be getting more and more questionable!)

High-grade corporate debt and other fixed income investments come next.

And then shares, with large Blue-Chip companies supposedly being less risky than small penny shares.

Finally, at top end of the “risk pyramid”, you have derivatives like futures, options and spread betting which use leverage to magnify potential profits, but which can also magnify losses.

The graphic below from The Tortoise Mindset also lumps things like cryptocurrencies and precious metals in at the top. 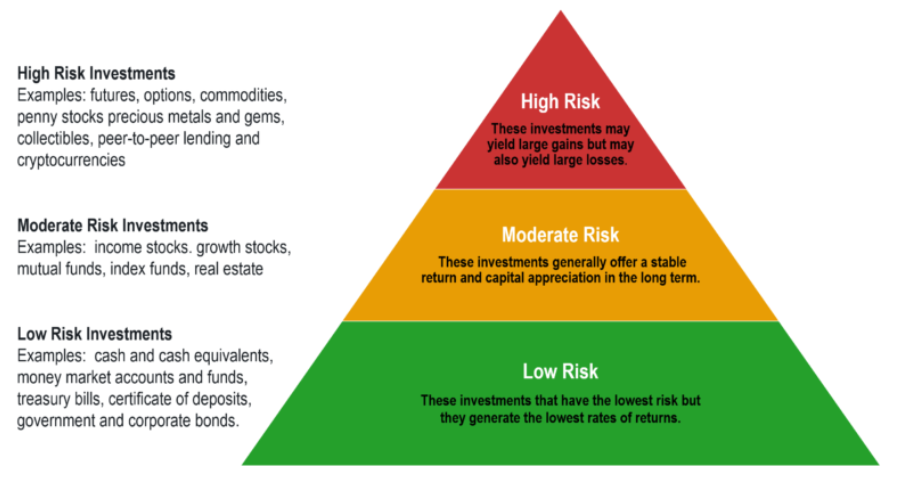 I don’t necessarily agree with the exact make-up or whether each asset is as safe or otherwise in all conditions.

One of the things we’ve been talking about in Monkey Darts for a while is the threat of surging inflation.

With interest rates at zero – and possibly heading into negative territory – and central banks pumping money into the economy, which is chasing fewer goods due to Covid-based supply constraints…

It’s easy to imagine prices rising – and fast – at some point down the line.

And when you get surging inflation, then perhaps cash isn’t such a safe place after all.

With governments racking up trillions of dollars (or pounds, euros, yen) in new debt each day, how safe is your investment in government debt?

And how about all those ‘safe’ Blue Chip shares in your retirement portfolio, chosen to provide a nice steady income?

And it’s happening across the market, according to The Guardian:

“Almost half (46) of the UK’s biggest listed firms have now either reduced, deferred, suspended or cancelled cash returns to shareholders, according to research by AJ Bell.”

At the same time, some of the racier companies on the market are delivering outstanding returns.

The point is, in times like this – and in fact always – it makes sense to spread your risk across asset classes.

It’s your best chance of protecting yourself from a catastrophic event in the markets.

Whilst precious metals, penny shares and cryptocurrencies appear at the top of that pyramid, they’re still something we should consider holding in our portfolios…

Especially when you consider the upside potential they offer.

Always be prepared for the tail-end events

The article I read about risk earlier this week was by Morgan Housel, co-founder of The Collaborative Fund.

He told a harrowing story about how, as a teenager, he and two friends went off-piste skiing in the mountains near his home.

They knew they shouldn’t be skiing out of bounds.

And they knew the weather in recent days had created what Housel now describes as “textbook perfect avalanche conditions”.

But as teenagers and accomplished skiers, full of bravado and always after a thrill, they ignored the risks.

They encountered a minor avalanche, no more than knee-depth, that didn’t harm them, and gave them a thrilling experience.

So much so that his two friends decided they wanted to go back up the mountain again and do it again.

For some reason, Housel decided he didn’t want to go.

Instead, he arranged to meet them at the bottom with his pick-up truck and drive them back home.

Tragically, his friends were caught up in a bigger avalanche and were killed.

Clearly, the event has haunted Housel ever since.

And it changed his outlook on life and specifically on risk-taking.

Here’s how he put it in his excellent article about the three sides of risk:

“My risk tolerance plunged after Brendan and Bryan died. I broke my back skiing (no nerve damage) a few months later, which crushed it even more. I haven’t skied much since. Maybe ten times in the last 19 years. If I’m honest, it scares me.

“I’ve been risk-averse in other areas of life ever since, too. I drive the speed limit. I obey the seatbelt sign on airplanes. I invest in index funds.

“I don’t know if Brendan and Bryan’s death actually affected how I invest. But it opened my eyes to the idea that there are three distinct sides of risk:

“The first two are easy to grasp. It’s the third that’s hardest to learn, and can often only be learned through experience.

“We knew we were taking risks when we skied. We knew that going out of bounds was wrong, and that we might get caught. But at 17 years old we figured the consequences of “risk” meant our coaches might yell at us. Maybe we’d get our season pass revoked for the year.

“Never, not once, did we think we’d pay the ultimate price.

“But once you go through something like that, you realize that the tail-end consequences – the low-probability, high-impact events – are all that matter.

“In investing, the average consequences of risk make up most of the daily news headlines. But the tail-end consequences of risk – like pandemics, and depressions – are what make the pages of history books. They’re all that matter. They’re all you should focus on. We spent the last decade debating whether economic risk meant the Federal Reserve set interest rates at 0.25% or 0.5%. Then 36 million people lost their jobs in two months because of a virus. It’s absurd.

“Tail-end events are all that matter.

“Once you experience it, you’ll never think otherwise.”

We never know what’s coming in the markets.

For ages it seemed like markets would only go up.

But then Covid-19 struck and that reminded investors that markets can go down as well.

Yes, the market has bounced 33% since the lowest point of the February-March Covid sell-off.

But we don’t know whether the bear market has been banished for good.

Or whether there’s further downside to come.

I suspect there could be.

So, it makes sense to spread your risk accordingly. It’s the most important concept in investing at any time.

How you do that will depend on your own financial position and attitude to risk.

But it could mean including alternative assets like gold, silver and cryptocurrencies alongside stocks that play on your favourite investment themes.