This could get out of hand.

Donald Trump’s acting like a kid trying to make his mark in the playground.
That’s how he comes across.

But sooner or later, picking fights with the bad kids is going to get him a big slap.

And not just him. Not even just America.

The consequences of Trump’s actions could affect us all.

Let’s think about this…

The trade war hasn’t even started yet

In the past couple of weeks, Trump announced a bunch of tariffs on goods imported from China.

Then China retaliated by revealing tariffs on US exports to China.

That much we already know.

But really, there is no war yet.

What we’ve seen so far are signals. The laying down of intentions… threats even.

They now have some time to think about it and see if they can negotiate before the tariffs take effect.

And if these guys are smart, then they’ll try to reach some sort of compromise so that the tariffs don’t go ahead on this (or a larger scale).

Because it’s a bad idea to go down that route.

Trade wars are not good for anyone concerned.

At the higher level they kill economic growth and could cause a proper stock market crash.

And at a smaller scale they affect people’s livelihoods. For example, if China went ahead with a tariff on soybeans, it would hit US farmers hard. China is 30% of their market.

So, let’s hope they come to an agreement.

Over the past week, things have cooled down a little between Washington and Beijing.

At least on the face of it.

People aren’t going crazy about it on social media like they were a week or so ago.

But that doesn’t mean a trade war is off the agenda. Far from it.

There’s just been a slight reduction in the bellicose rhetoric tweeted from the White House in recent weeks.

But as we’ve seen time and again, things can and do flair up.

If Donald Trump gets out of bed the wrong side, he could fire off a tweet that escalates things.

Christine Lagarde at the International Monetary Fund is still worried…

“The multilateral trade system has transformed our world over the past generation. But that system of rules and shared responsibility is now in danger of being torn apart. This would be an inexcusable, collective policy failure.”

She’s right about that.

If Washington and Beijing don’t see sense and cut each other some slack, it’s bad for our world.

And maybe not just in terms of world trade, as Madame Lagarde suggests.

I can’t help wondering where else it could lead…

Remember, one of the other fights Trump’s been having is with North Korea and Kim Jong-un.

At the end of May, they’re due to get together at a summit to negotiate North Korea’s denuclearisation.

Basically, Trump needs China. This from The Jakarta Post:

“China’s assistance is essential in denuclearizing the North. US intelligence officials say that North Korea could be just a few months away from successfully mounting a warhead on a missile that could reach the American mainland.”

So, what happens if we get an escalation of tit-for-tat China-US trade war rhetoric?

Is it too much of a leap to say that could jeopardize the situation in the Korean peninsula… and open up the threat of nuclear war?

OK, nobody wants it. But in these febrile times, it’s certainly not beyond the bounds of possibility.

And then there’s the Syria situation, where again Donald Trump is acting like a loose cannon.

Here’s one of his tweets from earlier this week: 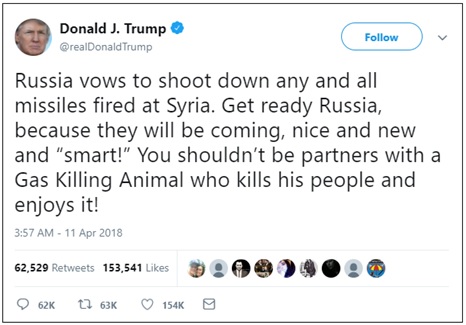 When you see stuff like that, the kid in the playground analogy doesn’t really cover it, does it?

“The President of the United States is now a timebomb of instability and rage ready to trigger a constitutional crisis, a wild trade policy escalation, a geopolitical military distraction, or a combination of the above.”

You’d hope that he’s got enough smart people around him to stop him from doing something stupid.

Fear spills into the markets

Following that tweet Trump sent on Tuesday (above), gold shot some $25 dollars higher to test the $1,370 level.

That’s a sign people were buying the safe-haven asset to hedge against a worst-case scenario.

In other words, Trump firing missiles at Syria and Russian soldiers getting killed in the attack. That’s something Russia has said could lead to “dire consequences”.

Thankfully, Trump followed up with another tweet yesterday, playing down his previous threat: 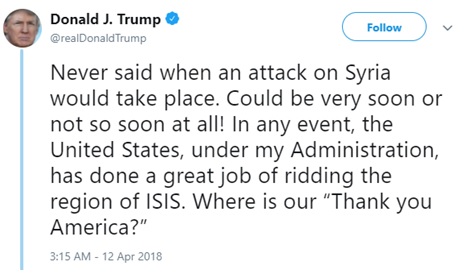 And that’s seen the risk premium on gold disappear as quickly as it appeared!

But when you see the gold act like it has done this week, it’s a great reminder of why it’s a good idea to hold some in your portfolio.

If things do get ugly out there, it could well be the catalyst that sends gold on a new run higher.

By the way, precious metals weren’t the only commodities seeing some action this week.

The price of a barrel of oil also surged to four-year highs on Middle East tensions and war rhetoric. And it’s likely to stay up until the threats disappear.

What happens if the oil price keeps heading higher and busts through $100 a barrel?

OK, it’s not going to happen any time soon. But it could do over a period of months… if the Middle Eastern situation gets worse.

But that’s not that far away…

Not when you consider that oil’s gone up 50% over the last nine months.

And from a chart perspective, once you start breaking resistance levels, things can move quite quickly.

What’s clear is that if it gets up to triple digits, it could put a huge drag on world economic growth.

And way ahead of that, as traders figure it all out, it could mean a substantial correction on the stock market.

Meanwhile, ignoring the world’s tensions, the crypto market has seen an impressive surge this week.

Yesterday Bitcoin went up some 20% in the space of six hours. And another popular one, Ethereum, was up 10%.

But yesterday’s moves show there’s still huge interest. And the bulls certainly turned the bears over.

From billionaire George Soros taking an interest in cryptos. To cryptos being declared compliant with Shariah Law.

Some reports say that one of the main reasons for the sell-off in cryptos over the past few months is to do with tax.

A lot of people made a lot of money in cryptos in 2017. And if they realised those gains by selling, then they owe capital gains tax to the taxman by the tax deadline (17 April in US).

And a lot of people had to sell more cryptos to get the cash to pay the taxman. Hence the selling pressure in the market.

I can see how that would work.

Now that the tax deadline’s just about here, the selling pressure is easing. And finally, the bulls have taken charge.

It’s too early to say if this week’s action marks the start of a new uptrend.

But crypto traders will be feeling more positive than they have in a while.

That’s all from me. I’ll be back next week – have a great weekend.