What are the two hottest markets for 2018?

Cryptocurrencies are the biggest money story of 2017.

And looking ahead to 2018, it’s likely to be even more popular.

Not just getting a mention on BBC Radio 4’s Today programme kind of mainstream.

I’m talking about everywhere you look kind of mainstream.

When everyone you know owns cryptos. Your grandparents, your next-door neighbours, the mums and dads on the school run.

Not only that, but the growing use of Bitcoin in shops and other businesses…

By which time, a lot of the crypto currencies could well be trading at higher prices than they are today…

If you’re getting Canonbury’s expert crypto guidance, you’re in a good place. (If not, check it out here.)

But you should make sure you get the most out of it.

As a forum for learning about Bitcoin and Ethereum and other cryptos, I’ve not seen anything to rival it.

It’s not just that the guy behind it is a genuine crypto multi-millionaire with vast experience of how this market really works.

It’s not just that he offers insight on what he believes is the best crypto to buy right now.

It’s not even that he’s created a suite of resources that walks you through everything you need to know to start making money from cryptos.

All that stuff is great, of course.

A wealth of shared experiences

And Finn – the super-successful crypto investor at the heart of the group – regularly chips in to support and help members.

And to anyone whose interested in taking advantage of the crypto markets in 2018, that’s a great head start on most people.

So if you’re already a member of Finn’s Crypto Kickstart Programme, be sure to take a look at the excellent step-by-step videos he’s put together.

It’s like having a crypto expert hold your hand and walk you through how to get started!

And if you’re not a member but are slightly intrigued about cryptos, you should take a look.

They’ll welcome you in and show you everything you need to know about cryptos. To find out more and get Finn’s top crypto pick for 2018, click here.

Like I said, more people are talking about Bitcoin and cryptos.

For those who won’t buy cryptos

Even so, I know that some people just won’t buy cryptos.

Maybe they just don’t understand it. Or they’re afraid of the volatility.

Or maybe, they just prefer traditional types of investment, like stocks.

And as I was saying in Monkey Darts last week, people have been making crypto-like returns by investing in certain shares.

The global move towards legal marijuana has been doing exactly that.

And to remind you, there are two big potential drivers for further pot-related gains…

Solving the tax problem with dope

One is the roll-out of legalisation across remaining states in the US.

So far, 29 out of 50 US states allow cannabis for medical use.

And for pure recreational use, you can only smoke it in eight states.

But the kicker is that those states where it’s legal – for whatever reason – are making a killing in taxes.

Colorado, one of the first states to legalise weed for recreational use back in 2012, makes $200 million in tax on revenue of $1.3bn.

And that means it’s only a matter of time before other states want in. It’s a great way to make up for the shortfall in tax receipts.

Mason Tvert, communications director for the Marijuana Policy Project, said:“This money is just the tip of the iceberg. Hopefully this will be a wake-up call for the 42 states that still choose to force marijuana sales into the criminal market and forego millions of dollars in tax revenue.”

This is a huge, nascent industry.

Business Insider reports that sales of legal marijuana “are predicted to hit $9.7 billion in North America” this year. That’s up 33% on 2016.

And over the next three to four years, the market’s expected “to reach $24.5 billion in sales — a 28% annual growth rate by 2021 — as more states legalize marijuana for recreational use and existing markets mature”.

“Aside from cryptocurrency, there is simply no other industry changing as rapidly as the cannabis sector.”

Not just in North America, remember…

As I mentioned in Monkey Darts last week, Canada could be the big one for 2018.

It’s not sparking up the pot market province by province, US-style.

Canada’s aiming to legalise weed across the whole country in one hit.

And stocks have been racing higher in anticipation… 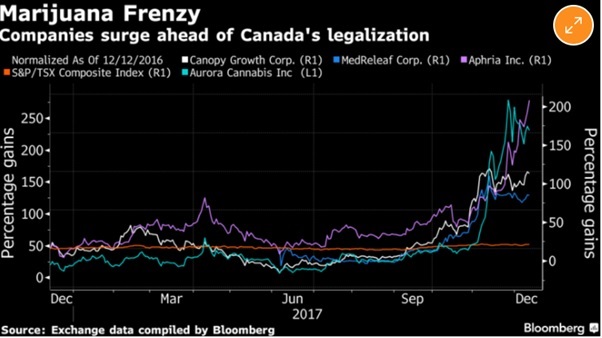 But there’s been a bit of a wobble this week.

The latest news is that anti-weed Conservative politicians are trying to hold up the passage of a couple of regulatory bills.

But it could well delay it beyond the 1 July 2018 target the government was aiming for.

And that’s not great for companies gearing up to start selling pot in huge quantities to provincial governments.

The risk now is that speculators who own these Canadian pot stocks in anticipation of the 1 July deadline could bail out.

And if there’s a rush to unload shares, there could be a messy correction with prices falling rapidly.

Let’s see if the market loses some of its froth following this latest development. If so, there could be some better buying opportunities.

There’s no hurry to get in right now. We’ll keep an eye on how this market behaves.

In the meantime, a couple of ideas for you…

The UK stock at the forefront of cannabis therapeutics

The first is one I mentioned last week.

GW isn’t a true “pot stock” that grows the plants and sells them to the medical industry or to people to smoke.

And it’s not one of the ‘picks and shovels’ companies making the equipment used in pot production.

Instead, it takes the properties of the plant and develops them into treatments for pain and disorders of the central nervous system.

Pot smokers like the effects of the cannabinoids found in the plant, such as THC (tetrahydrocannabinol). It’s the psychoactive compound that makes them high.

Well GW found that THC and other cannabinoids are also great for pain relief. They work by mimicking natural pain relievers released in the body.

It then developed the world’s first prescription medicine (Sativex) derived from the cannabis plant. It helps multiple sclerosis sufferers.

Sativex has regulatory approval in 30 countries, but not the US. That’s the big market to crack. It’s where GW is focusing on.

And GW has other cannabinoid-based products in development.

As I said, this isn’t strictly a pot stock. But for UK investors, it’s an interesting play on the legal pot theme.

As you’d expect, GW isn’t the only company working on cannabinoid treatments.

Those are a few ideas for you to check out.

As for the pure-play Canadian pot stocks, personally I think they’re over-stretched. Especially given this week’s spanner in the works from Conservative politicians.

And to be honest, you’d have difficulty buying them anyway. UK brokers are a little squeamish about dealing in anything pot-related.

That may well change as marijuana becomes more accepted around the world. We’ll see.

In the meantime, one other idea to keep an eye out for is the new Alternative Agroscience ETF (exchange traded fund) due to be launched on 26 December.

This fund will track an index of companies “primarily engaged in the legal cultivation, production and distribution of cannabis, pharmaceutical companies that manufacture or market cannabinoid-related drugs and businesses that make fertilizers and pesticides used in the cultivation of cannabis.”

In other words, a way to get exposure to the pot theme by spreading your risk across a few different stocks.