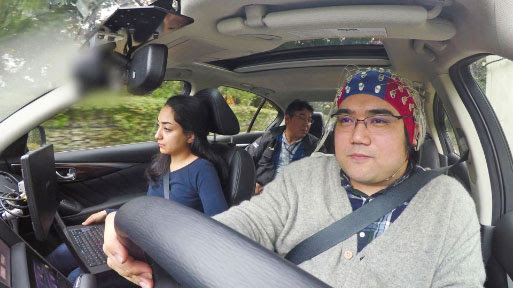 For the last few years, Nissan has been working on a strange new feature for its cars.

In the trial runs I’ve seen, the driver wears a headset full of sensors that read electrical activity in the brain.

The information is fed back to an onboard computer – reaction times, the brain signals that anticipate braking and accelerating.

And the car and driver seem to reach a zen state of mutual understanding.

The final headset will be lightweight and easy to wear says Nissan.

And it will radically improve your driving.

By recognising when you are about to brake or swerve, say Nissan, you can shave between 0.2 and 0.5 seconds off your reaction time.

And they are not the only ones to developing this stuff.

Renault experimented with using EEG tech to control a car in 2016.

Jaguar announced in 2015 that it was working on a way to measure a driver’s brain waves in order to make sure they were paying attention to the road.

In fact, the car industry is one of the fastest changing areas of technology at the moment.

Car companies will tell you that you will soon be driving a car that is autonomous, electric and connected to an internet of helpful driving devices.

This will create cars that are cleaner, cheaper and more intelligent.

In this issue of Monkey Darts, I thought we’d take a look at the latest developments and the investment opportunities that will fall out of this…

The first big change is the shift to electric cars.

So far drivers in the UK have been slow on the take up: EV sales only accounted for a small proportion of the cars sold last year – about 60,000 vehicles in total.

And there are good reasons for that.

These vehicles are strange to us.

We’ve grown accustomed to the sounds and vibrations of the combustion engine.

It can seem unnatural to drive a vehicle that whirrs as it speeds up and slows down.

Then there’s the range issue.

Many of these cars have a very short range…good enough for a few school or shopping trips before another charge is needed.

But these vehicles are popular with their owners.

Because the heavy batteries are often low in the body or built into the floor, these cars can have quite a low centre of gravity, which means they handle well.

The range is improving: a Nissan Leaf can go for 150 miles on it’s 40 kW battery. 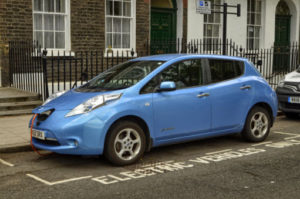 And with Elon Musk, Nissan and every other car company competing to develop electric vehicles, they will keep improving.

There is certainly plenty of state support.

Gregor McDonald, who writes the excellent Terrajoule newsletter, says that America’s transportation sector is already shifting from oil to electricity

“They recognise that because an electric vehicle uses 70% less energy than an ICE vehicle, it will be trivially easy for each state to supply all the demand growth EV will need from wind and solar.”

China is in pursuit of the same formula but, at a hyper, accelerated pace.

Still price is a major barrier for the take off of EVs.

The older models can be bought second hand for around £12k.

But most people will continue to wait until these vehicles are more affordable.

The big change factor will be the cost of the next generation of lithium-ion batteries.

The cost of lithium-ion batteries has already fallen from over $750 per kilowatt/hour in 2010 to less than $200 today with $100 or less in sight, especially as the Chinese pursue a policy of crashing the battery market.

That could radically reduce the cost of driving.

The Tesla 3 was a ‘tipping point’ for EVs… 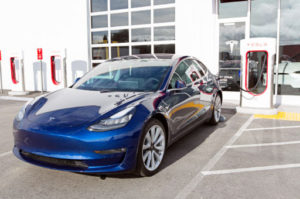 Tesla sold about 140,000 higher-priced Model 3s in 2018 during the first full year of production.

That’s good news for the companies who are supplying the raw materials.

We’ve written about the importance of cobalt before.

If total battery pack prices drop from $209/kWh to $100/kWh, but raw material costs stay the same, the raw materials cost would account for 56% of the price, substantially higher than today’s 27%.

The other issue with cars is the misfiring and irrational decision makers behind the wheel.

There are now 33 companies working on developing ‘brains’ and operating systems to aid human drivers.

A major element is the self-learning capability of the car.

Tesla’s Autopilot has already clocked up over a billion miles of experience.

But there is a significant improvement in technology needed before we get fleets of self driving cars on the road.

It turns out that the transition from Level 2 autonomy, which is really enhanced human assistance, to Level 3 and 4 autonomy, is fraught with serious risks to driver safety.

A number of Tesla drivers have now died with autopilot activated, and while many autonomous vehicles teams have abandoned Tesla’s approach, Elon Musk’s firm is sticking to its previous strategy.

Timothy Lee says that “Tesla’s plan is to essentially run a massive driverless-car testing project using its customers as unpaid safety drivers. Drivers get no real training on the dangers of inattentive Autopilot use.”

Still super-smart cars will transform the commuting experience for all of us. 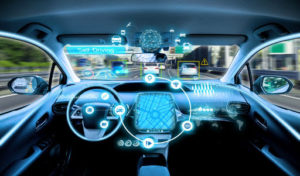 Apple plans to integrate Siri into automobiles, creating virtual personal assistants in the car to help us with routes, traffic information, and the scheduling of our day.

And other developments are imminent…

There is Super Cruise from General Motors, which controls the vehicle on long highway stretches when not much is happening.

Then there is the Traffic Jam Assistant from BMW: cars moving in a congested traffic area just like a school of fish.
The car will be reimagined again and again by the likes of Google, Tesla, Apple and Baidu.

Lawyers will have to wrestle with complex issues of who exactly is responsible for what in the event of accidents and injuries.

And the competition will be furious.

None of those goals were, or will be, met.

This week court documents revealed that Uber is burning through $20 million per month to meet its ambitious self-driving car goals.

I’ll keep you up to date on the investment opportunities in forthcoming issues of Monkey Darts.