What happens when London runs out of water? 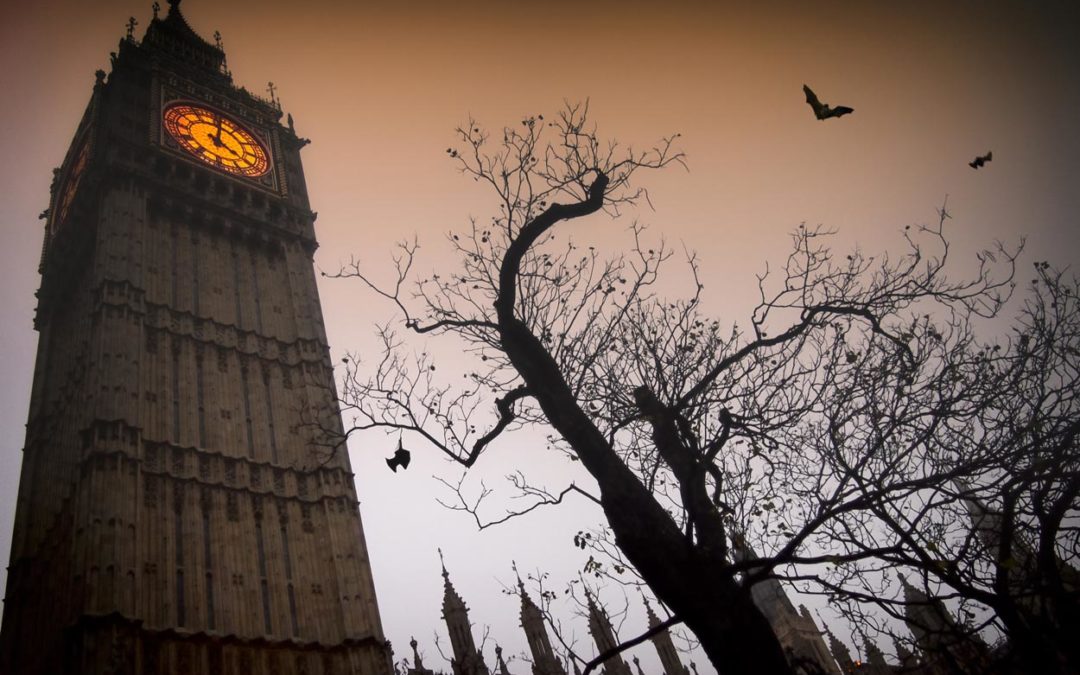 This time last year, the residents of Cape Town faced an apocalyptic scenario.

Three years of drought had drained the reservoirs and the city was dangerously close to running out of water.

Hospitals and schools began to stockpile.

The police braced for riots.

At one point, the reservoir at the Theewaterskloof Dam (pictured below) – source of roughly half of Cape Town’s water – fell to 13% capacity. 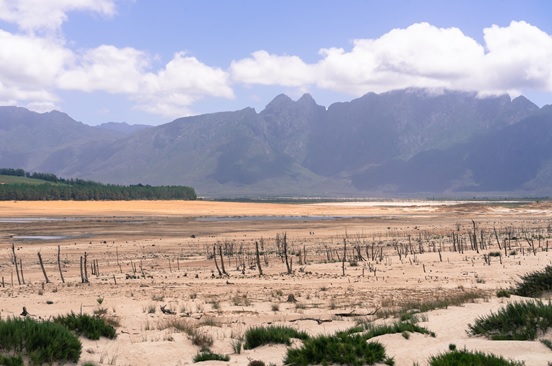 So the government took extreme measures.

It announced a “Day Zero” – a deadline past which dam levels would be so low that they would have to turn off taps and send people to communal water collection points.

That brought the city to a standstill.

Offenders were publicly shamed, with the mayor visiting the homes of water wasters and her office publishing a list of the top 100 offenders.

“When Day Zero comes, they’ll have to call in the army,” said Phaldie Ranqueste, as he filled his white S.U.V. with big containers of water at a natural spring where people waited in a long, anxious line.

The emergency measures jolted people into action – water consumption dropped by half in the space of a few months.

The reservoirs began to fill up again.

But the city remains in the grip of this crisis. Today, the average resident in Cape Town consumes about 50 litres per day. That compares to an average of 150 litres per day in London.

And if the droughts return or consumption climbs again, Cape Town could easily fall back into crisis.

And it’s not the only city facing this scenario. Take London. With an average rainfall of about 600mm (less than half of New York), London draws 80% of its water from the Thames.

And the city has several problems.

It wastes about 25% of its water through leaky pipes and it’s Victorian sewage system.

In months of drought, water levels can plummet.

And this is all happening as demand from it’s 10m residents continues to climb. 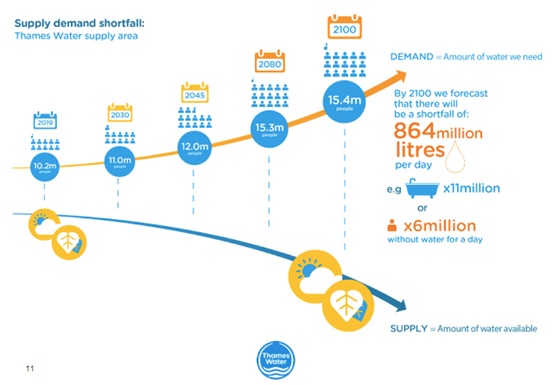 According to the Greater London Authority, the city is pushing close to capacity and is likely to have supply problems as soon as 2025.

In fact, London now ranks as just one of 11 cities, just after Cape Town, most likely to run out of water in the near future.

The problem is that as we urbanise, we are placing enormous stresses on our water resources.

This is due to three hard problems…

The world’s fresh water is not evenly distributed, so cities and farms have to invest enormous resources to pipe it in. 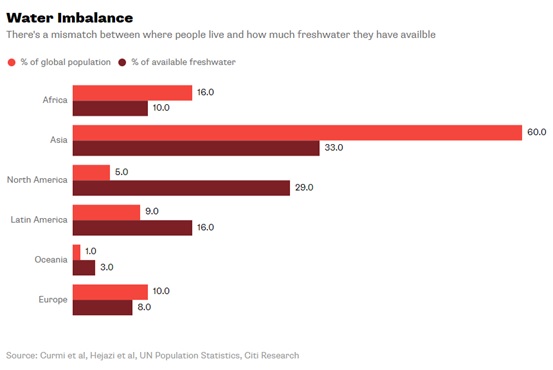 As the world’s population migrates to big cities, it will be increasingly expensive to transport a resource that is heavy, liquid and prone to evaporate.

Extreme water is causing havoc with the hydrological cycle – leading to floods, droughts and huge shifts in the seasonality of rainfall.

Water that is available is not pure enough for consumption – only 2% of the world’s water supply is fresh – and increasingly we are polluting those scarce resources still available to us.

Research from the Lancet Commission suggests that a huge volume of plastic waste in the world’s water — approximately 8 million more tons every year — is finding its way into humans.

People eating seafood could be ingesting up to 11,000 pieces of micro-plastic every year.

Meanwhile, microplastic fibres are found in 83% of the world’s tap water and there is now a concern that these micro-fibres could bind with compounds containing toxic pesticides or metals, providing these toxins with a route into the body.

Its likely to have grave knock-on effects on agriculture, energy, transport and food security…

Shock 1: A Collapse in the Food Supply

“In a world of growing environmental strains our increasingly complex food system is becoming more vulnerable to sudden supply shocks.

The interaction of disruptors such as extreme weather, political instability or crop diseases could result in a simultaneous blow to output in key food-producing regions, triggering global shortages and price spikes.

The risk of a systemic breakdown could be further elevated by wider fragilities, including reduced crop diversity, competition for water from other sectors and geopolitical tensions.

Social fractures would intensify in affected and at-risk countries. Political and economic crises would be likely.

So too would a surge in smuggling, both of food and people.

Steps are needed to improve sustainability and resilience throughout the food system.”

Against such a volatile backdrop, crossborder tensions could worsen sharply, according to a recent report by European Commission’s Join Research Centre.

According to chief scientist Fabio Farinosi…

“Conflicts are most likely to arise in areas where a “transboundary” to water is present, such as a shared lake, basin, or river, and when freshwater is scarce, population density high, and power imbalances and climate stresses exist.

A number of potentially problematic areas were identified, including five hotspots: the Nile, Ganges-Brahmaputra, Indus, Tigris-Euphrates, and Colorado rivers.” 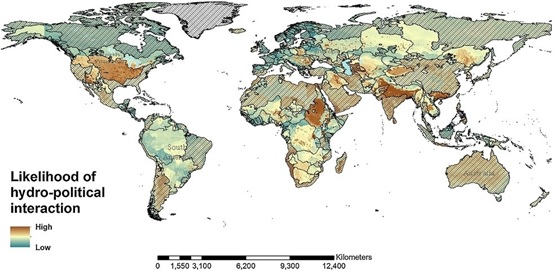 The growing list of conflicts over water in recent years makes for sober reading.

Worldwide, the researchers found that rising temperatures and population growth will increase the chance of cross-border conflicts by between 75 to 95 percent in the next 50 to 100 years.

We need to look to Israel

Well there are several examples of countries that have adapted to chronic water shortages.

60% of Israel’s land is desert and the rest is arid.

Rainfall has fallen to half of its 1948 average.

And so facing collapse, Israeli cities introduced a remarkable system of water management.

They started treating sewage so that it could be used for farming.

They discovered that wasteful farming practices – in particular, flooding a field to irrigate it – are a huge fact in regional water shortages.

And so, starting in the 1960s, Israeli farmers abandoned this technique in favour of “drip irrigation”.

This reduces the loss of water to evaporation, gets water to the roots more efficiently, and helps to radically boost crop yields.

There are number of Israeli irrigation companies that now sell their systems to farmers worldwide.

There is one in particular that I think has huge potential over the next few years.

I’ll tell you more about these in the coming weeks.

Israel also built 250 reservoirs, raising recycled water from 5% to 85%, and rehabilitating its rivers.

Then they started building desalination plants.

According to Wired magazine, desalination facilities typically fall into one of two categories: thermal and membrane. With thermal, you suck in seawater, heat it up to get the pure vapour, and pump the remaining brine back out to sea. With membranes, you push seawater at great pressures through a series of filters, which pull out all the salt and other contaminants.

RO is cheaper and more efficient and the technology means that facilities require less and less pressure, and therefore energy, to filter seawater. The downside is that leaves a lot of brine to settle on the seabed, damaging ecosystems.

And stirred by the prospect of their desert metropolises running dry, the sheikhs of Abu Dabi and Dubai have been investing heavily in these plants too.

If you are looking for broad exposure to this story, you might invest in an ETF such as the iShares Global Water Index ETF, which replicates the returns of a portfolio of 50 global water-related businesses for a charge of 0.67pc a year.

The PowerShares Water Resources ETF (Nasdaq: PHO) is higher risk but is actually quite concentrated in technology aimed at addressing water shortages.

This is a huge and growing market: annual investments of $449bn in water infrastructure are required to meet the targets laid out in the UN’s Sustainable Development Goals, according to Global Water Intelligence.

And the resources of almost every major city will be pressed into developing comprehensive programmes such as those in Israel.

I’ve been preparing some research on two water technology companies that are likely to help solve this crisis in several countries.