What if the Fed can’t fix the economy? 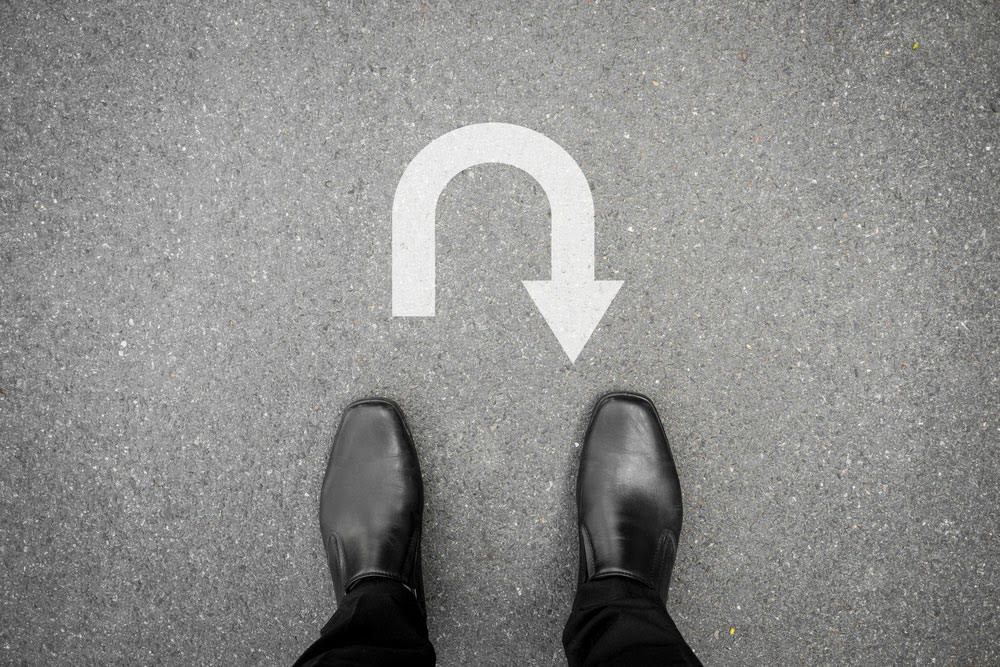 Uh-oh. This is worrying.

The US Federal Reserve is nervous about the scale of the coming global recession.

And it’s throwing everything it can at it to stop it happening: cutting rates, devaluing the dollar and buying bonds.

The problem is, it’s unlikely to be able to do anything about it.

In the past few months the central bank has already done a U-turn on interest rate policy.

In December last year, it said it would be raising rates twice in 2019 because the outlook was positive.

But then the data started coming through showing everything wasn’t so rosy after all, at a global level.

As Forbes reports, in January the Fed identified several concerns:

“Slowing global growth, especially in China and the Eurozone; tightening market financial conditions, which tends to amplify the Fed’s own monetary tightening; and the U.S. government shutdown, were all factors. They all create headwinds for the U.S. economy that could in due course mean slower growth, lower inflation and rising unemployment.”

So, the Fed stopped raising rates. And said it would be “patient” about further hikes.

And that’s partly what’s keeping investors relaxed about pumping money into the markets.

Time to be cautious

There are two reasons US indices are careering back towards all-time highs.

One is new hopes that the US-China trade war is coming to an end. (Really? I doubt it – more on that in a moment…)

And the other is this support for the markets from the Federal Reserve (under orders from the guy at the top).

But it’s time to be cautious.

What if the Fed can’t fix it so the world’s biggest economy avoids recession?

What if China’s one-time powerhouse economy continues to slow?

What if the trade war escalates… not just between the US and China… but between other countries too, further stifling growth?

With rates on the floor already, central banks will have NOTHING in their tool kits to prop up the economy and the markets.

The recession will bite hard. Unemployment will soar. Consumers will stop spending. Companies will go bust.

And finally – after a raging 10-year bull market, stock indices will crash.

It’s then that you’ll be thankful for having some of your wealth in alternative assets: precious metals like gold and silver, collectibles and, potentially most rewarding of all, cryptocurrencies.

How did we get here?

At the same time, it launched the first of its quantitative easing (QE) programmes.

That meant it started buying up government bonds (Treasurys) and mortgage backed securities.

So, the Fed loaded up its balance sheet with assets… and pumped cash into the market and economy.

At the same time, cheap credit allowed companies to borrow to expand and consumers to binge.

The combination aimed to stimulate the economy and boost the markets.

Well, it certainly did the trick with stock prices!

No denying, investors who stuck money in an S&P tracker did well over the period.

But it’s what lies ahead that’s the problem.

Why the Fed had to change direction

The combination of near-zero interest rates and QE was only ever supposed to be a temporary measure.

It wasn’t meant to last for the best part of a decade. But it did.

And up until December last year, there were 7 rate hikes in a programme designed to get the base rate back to a ‘normal’ level.

That programme was supposed to continue this year, with at least two rate increases.

But in January the Fed announced it was going to pause. Because it didn’t like what it saw coming: slowing global growth, an ongoing trade war with China and the threat of a shrinking US economy.

That’s why in July the Fed cut rates by 25 basis points for the first time since 2008, citing negative “global developments” (i.e. trade war and slowing global growth) and “muted inflation”.

And it’s now expected to cut rates by another 25 basis points later this month.

That’s unless Donald Trump has anything to do with it, in which case the cut could be even bigger.

In his latest attack on the hapless Fed chief, Jay Powell, the President said he wanted a 100-basis point cut.

Trump’s desperate to secure a second Presidential term in 202o.

And a robust economy and soaring stock market will go a long way to getting him the votes he needs.

He’s piling the pressure on Powell because he believes the Fed can give him what he wants.

“The Economy is doing GREAT, with tremendous upside potential! If the Fed would do what they should, we are a Rocket upward!”

But there’s no guarantee that the Fed’s panic-driven rate cutting programme will work.

Not least because with rates at just 2.25%, there’s not a huge amount of room to go down.

Ahead of the Global Financial Crisis in 2007-08, US rates were above 5%. The Fed was able to slash 500 basis points to get things going.

It has far less ammo at its disposal now.

One of the world’s most successful investors, Ray Dalio of hedge fund company Bridgewater Associates, agrees:

And Dalio believes that if central bank policy does fail, there could be a major escalation in the global currency wars that have been seen recently.

That’s the idea that central banks around the world competitively lower interest rates to boost exports.

“Dalio said the currency war could intensify around the globe if central banks’ and governments’ monetary policy fails. He said lower exchange rates boost exports’ price competitiveness, benefiting financial markets to an extent. A dovish stance by central banks also encourages citizens to invest in foreign countries. Morgan Stanley has predicted the Fed will gradually move to a zero-interest rate policy. However, as cryptocurrencies gain popularity, central banks’ and governments’ control over money flow could diminish. Bitcoin has risen nearly 164% this year.”

The Fed and central banks around the world slash rates to zero to make exports more attractive and boost their economies.

But in doing so, the loss of yield on those currencies makes alternative financial assets like gold, silver and cryptocurrencies more attractive.

Well, you know our stance here at Monkey Darts.

We believe it makes a good deal of sense to have exposure to these alternative assets.

It’s a great way to add balance to your portfolio, rather than being 100% in stocks – never a good idea, but especially as we approach the end of a 10-year bull market.

Stock markets have been soaring this week because there’s talk of a meeting between US and Chinese trade delegates next month.

So, investors anticipate an end to the trade war… and the threat of global recession.

But haven’t we seen this all before?

There were supposed to be talks this month too and the market jumped.

I saw a good graphic on Money Maven today that shows how Trump’s tactics play out… and how the market reacts: 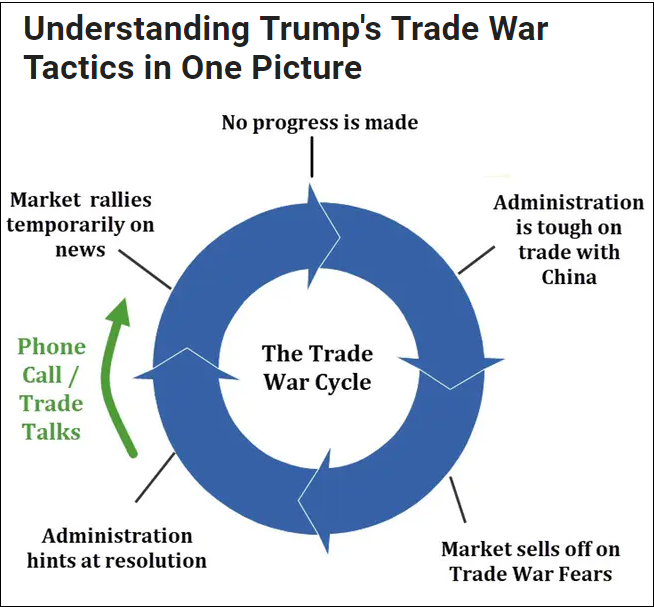 We’re at the left-hand side of that cycle right now… so there’s talk of the US/China sitting down to talk… so the market rallies.

Let’s see where this goes… and whether progress will be made.

If not, then yesterday’s rally might turn out to have been a good opportunity to take profits on overbought stocks.

As we’ve noted in recent issues, gold and silver have been taking off recently, reaching multi-year highs as capital seeks shelter and a potentially better return.

Meanwhile, Bitcoin and other major cryptos have seen a bit of a dip in the past few weeks.

According to Michael Mac at Crypto Traders’ Academy, this is to be expected after racing ahead over the summer.

He views these dips as opportunities to ‘top up’ a Bitcoin position. (Long-term, he believes they are heading much higher.)

If you’re a member of Crypto Traders’ Academy, make sure you look at the recent reports Michael’s sent out on buying dips in a Bitcoin bull market.

There’s some great advice there on how to use these pull-backs, either to add to your position… or to establish a holding if you don’t already have one.

And if you’re interested in crypto markets and want some help from an expert, check out the Academy here.

If things turn bad for stock markets in the coming months, there’s a good chance Bitcoin could attract a lot of interest.