What’s Donald Trump up to… and will it save the stock market? 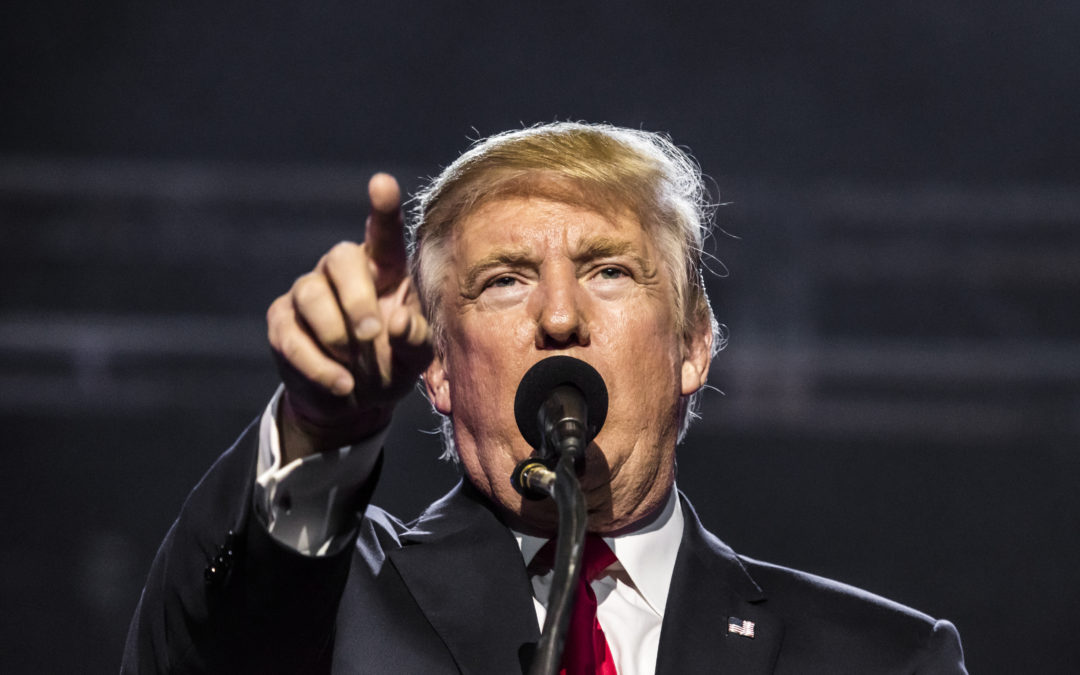 Donald Trump’s up to something.

He’s scheming about how to get out of the hole he’s in.

I’d put money on it.

He’s already furious about the impeachment enquiry that could see him removed from office.

And now he’s having to watch as the US stock market groans under the strain of deteriorating economic news.

Remember, US stocks were within a couple of percent of all-time highs last week.

And the ‘fear gauge’, or VIX index, was near multi-month lows at around 14…

This week, a crucial ‘economic health’ indicator, flashed a MAJOR warning for the US economy and the mood suddenly changed…

Tuesday and Wednesday were back-to-back days of +500-point drops for the Dow Jones.

And the VIX spiked above 21, up 50% in a couple of weeks, reflecting major volatility in the wider S&P 500 index.

And they’re worried there could be more market weakness ahead.

So, we should expect something BIG from Trump in the next few days.

And try to force potential voters that he delivers prosperity – by ‘rigging’ the stock market again.

Maybe he’ll do something drastic like force a change at the Fed.

We know all too well how Trump HATES Jerome Powell.

He accuses him of holding back the economy and stopping the market going higher.

Calls him ‘clueless’ and says Jerome and his Fed colleagues are ‘boneheads’.

So, whether it’s legal or not, I wouldn’t be at all surprised to see Trump try to shake up the Fed…

Get it to make its policy more supportive of what he wants: slashing rates to zero and sparking a huge market rally.

Is Jerome Powell’s job safe? He might be sweating a little and finding it difficult to sleep.

Whatever, the Fed is important in deciding how the economy – and the market – goes from here…

So, Trump is bound to be vocal – at least on Twitter – in the weeks ahead.

And maybe the President will play his China trade deal card.

That’s another way he could look to deflect attention from the impeachment… and get voters and investors onside.

As you know, next week Beijing’s sending China’s trade people to meet Trump’s people in Washington.

It’s the 13th round of negotiations.

And each time they’ve sat down before, it’s ended in disappointment down the line, whatever was agreed at the time.

Will this time be any different?

Some positive spin from that meeting on a trade agreement might do the trick and give investors hope leading to a short-term rally.

But one thing’s for sure: he’ll want something in return, such as China buying US agricultural products.

The market will be watching carefully… hoping for some easing of trade tension and steps towards resolution, for the sake of the world economy.

Question is: is the damage already done?

The worst manufacturing data in a decade

On Tuesday, the Institute for Supply Management (ISM) revealed its Purchasing Manager’s Index (PMI) for the manufacturing sector.

Purchasing managers are the people responsible for buying materials or services their company needs to make its products.

So, they’re well-placed to “assess the ebb and flow of business conditions”, as Investopedia puts it.

If they anticipate high demand for their products, they’ll be buying lots of materials and ramping up production.

But they’ll scale back if demand outlook is poor.

And all this data from hundreds of purchasing managers across the country is collated to create the PMI.

The index is released at the beginning of each month, to show how performance of the sector – and the economy – is changing from month to month.

And here’s the important bit…

If the PMI is above 50, it shows business is good. It means the manufacturing sector is expanding.

A reading of 50 means there’s no change on the previous month.

And if it’s below 50, then the sector is contracting. Which is a bad sign for the state of the economy – and for a President desperate for re-election next year.

“U.S. manufacturing fell deeper into a contraction last month, erasing hope of a quick turnaround for the industry and handing a blow to President Trump’s promises that he would revive blue-collar jobs and companies.

“September marked the worst month for U.S. manufacturing in more than a decade — since June 2009 — according to the closely watched Institute for Supply Management’s manufacturing index. Companies blamed Trump’s escalating trade war for many of their woes, putting pressure on the White House to show progress soon. Manufacturing remains a prominent industry in many swing states.” 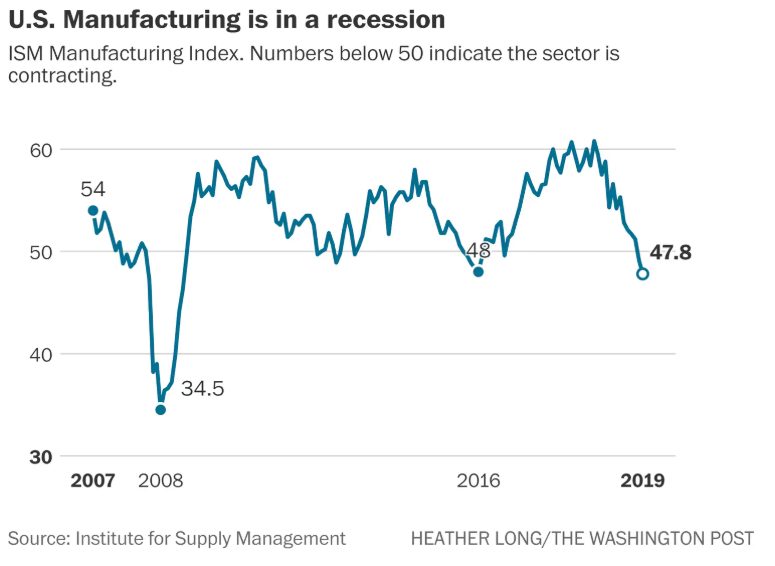 August PMI data came in at 49.1, which is in recessionary territory.

And many analysts had been forecasting a rebound back above 50.

But it’s not come yet.

The September reading released on Tuesday clocked in at a dismal 47.8. That shows the industry is contracting at a faster rate.

“If last month’s data was ugly, then this is even uglier. Not only have the headline PMI, new orders and production contracted at their fastest pace since the great recession, employment is its lowest since 2007 and exports fell off a cliff.”

It’s no surprise to you or me that this latest reading is so bad, is it?

Along with other Monkey Darts readers, we’ve known the US economy has been in bad shape for some time.

And we’ve been expecting it to get worse.

That’s why our stance on investing has been cautious.

We’ve been thinking about alternative assets, away from mainstream stock markets.

Of course, precious metals and cryptocurrencies have both shown volatility, too.

That’s only to be expected given that they often do the opposite to stocks.

The correlation isn’t so clear between cryptos and stocks.

But we’d still favour a mix of asset classes, including cryptos, rather than being all-in on an over-extended stock market.

And when it comes to equities, it makes sense to take profits on stocks that have had a good run and look expensive.

And you can tell from how markets reacted that investors are fearful about what more bad news there is still to come.

Manufacturing is by no means the main driver for the US economy, of course.

The non-manufacturing (i.e. services) sector makes up a larger part of the economy.

And when the September ISM data for that sector came out yesterday, it hit the market again, dragging the Dow Jones another 300 points lower.

Analysts were predicting a strong number above 55 for the services index.

So, expansion in the sector (as it’s above 50) … but a miss compared to forecasts… and the worst reading since August 2016.

It’s another sign that all is not well in the world’s largest economy.

As the Washington Post explains, “concerns are rising that the contraction in manufacturing could spill over into the rest of the U.S. economy.”

If that happens, there could be a lot worse to come for world stock markets.

So, Donald Trump has his work cut out if he wants to get investors – and voters – on side.

Let’s see what he’s got up his sleeve.

And in the meantime, be careful about over committing to the stock market.

The Dow Jones sold off initially following the services sector index miss yesterday. But by the end of the day, it had reversed and closed 122 points higher.

Judging by that 400+ point swing, investors are clearly betting on another rate cut from the Fed to try to save the economy… and the markets.

And if Donald Trump gets his way, and forces Jerome Powell’s hand, it will be a significant cut.

Lower rates might keep this overstretched market rally going a while longer. But how long can it last?

If the bad news keeps coming, the Fed might not have enough ammo to fight it off.

Stick to the script: Choose your investments carefully and spread your risk.