Why a Trump rate cut would lead to stock market chaos 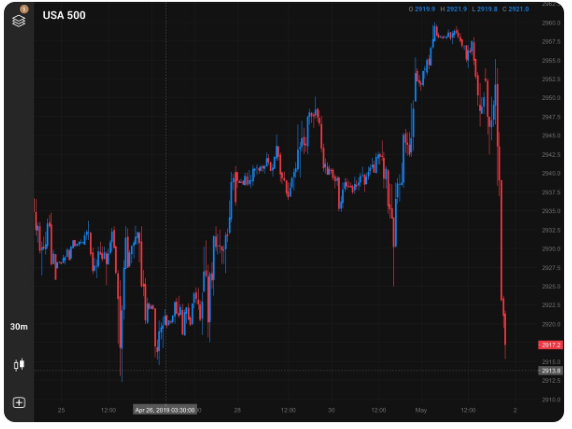 There have been plenty of headlines about the stock market hitting new highs this week.

But they’re not talking about the UK.

The FTSE 100 is 6% below its all-time peak from this time last year.

And it’s not about European markets, either.

In Italy, the MIB index must rise another 10.6% just to match last May’s record level.

And poor old Spanish investors are still 14.6% down from the highwater mark, set two years ago almost to the day.

The Japanese Nikkei is 8.9% below its high… and Australia is 7.2% in arrears.

When you look at it like that, world markets are not looking so great.

It’s all about the US

But all we hear are the headlines about the US.

That’s where markets have been nudging the highs.

Yesterday, the Dow Jones Industrial Average came to within 245 points of last October’s all-time high. That’s just 0.9% from the tops.

Meanwhile, the broader S&P 500 index of large US companies chalked up its own new record high on Monday.

And it pushed further into uncharted territory yesterday…

Well, at least it did until Jay Powell took to the stand to explain the Federal Reserve’s latest policy decision to keep rates on hold.

That’s when the market hit a concrete ceiling… and reversed, wiping out all this week’s gains and most of last week’s too.

You can see the sell-off on this chart:

Why the vicious turnaround?

The Wall Street Journal has the details:

‘U.S. stocks fell Wednesday after the Federal Reserve left interest rates unchanged and reiterated it will stay patient despite a recent patch of soft inflation.

‘Major indexes swung between small gains and losses for much of the day before turning lower after Fed Chairman Jerome Powell said in his press conference that he felt comfortable leaving rates flat for the time being. The comments surprised some analysts who had been expecting the central bank to potentially lower rates this year given recent inflation readings.’

And the Dow dropped 1.4%, a more headline grabbing number of 363 points.

That was exactly as expected – despite the efforts of President Trump to force the Fed into another cut.

Here are his thoughts fired into the Twittersphere on Tuesday, the day before the Fed policy announcement: 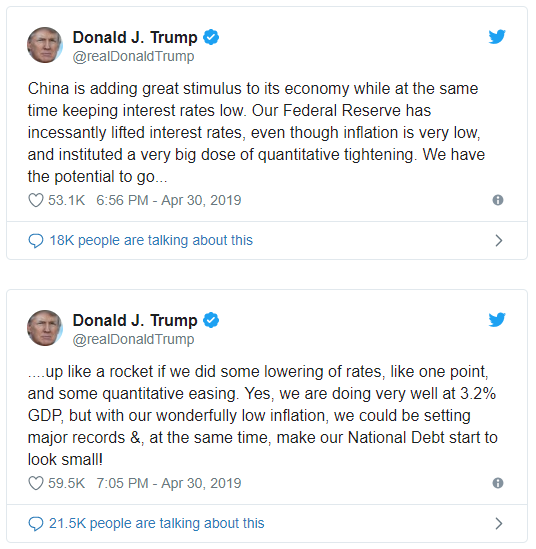 Trump’s dead set on winning re-election in 2020, of course.

So, he’ll do all he can to keep the economy firing on all cylinders… and the stock market marching ever higher.

And he’s seen it work before… when the Fed dialled back on its plans to hike rates in 2019.

The Fed raised its base interest rate by 25 basis points on four occasions in 2018.

Then it announced there would be further hikes in 2019. And further unwinding of quantitative easing (the policy that had supported the markets along with cheap credit since the 2008 crisis).

That’s when all Hell broke loose. Markets don’t like the idea of rising borrowing costs.

By Christmas, the market had fallen 20% from the October peak.

And that’s when Powell and changed his tune and said they’d hold off raising rates.

His new message to the market was that the Fed was “prepared to adjust policy quickly and flexibly”.

In other words, rather than a definite two or more rate hikes in 2019, they’d wait for the data to come out… and react accordingly.

And as for the reduction of the Fed balance sheet, rather than leaving it on “autopilot”, again they’d tailor it to the data.

If needed, “we wouldn’t hesitate to change it,” Powell assured the market.

And as we know, the market went back into party mode!

Which brings us to where we are – or were yesterday – knocking on the door of historic US stock market levels.

So, Trump knows what the Fed can do. And his tweets earlier this week were a vain hope to get Powell on side once more…

By cutting rates … and juicing the economy and the market… and securing him votes for re-election.

But what Trump’s ignoring are the potentially disastrous knock-on effects down the line if the Fed keeps the cheap money going.

More on that in a moment…

First, back to the Fed – which, to give it its due, chose to ignore the President and leave rates alone.

But it wasn’t the widely-expected decision to keep rates on hold that caused the sell-off in stocks.

As always, it was how Powell explained the Fed’s thinking afterwards in his statement to the press and the question and answer session.

In a nutshell from Bloomberg:

“Powell played down recent weakness in U.S. inflation as possibly “transitory” and gave no indication officials were weighing an interest-rate cut despite pressure from the White House to Wall Street.”

No interest-rate cuts in the pipeline. Panic!

As far as the Fed can see, inflation is too low… but won’t necessarily be for long.

“Even with consumption intact and the labor market tightening, inflation has remained vexingly low. The Fed’s preferred price gauge climbed just 1.5 percent in March from a year earlier, well below the central bank’s 2 percent target.

“We suspect that some transitory factors may be at work,” Powell said. “Our baseline view remains that, with a strong job market and continued growth, inflation will return to 2 percent over time and then be roughly symmetric around our longer-term objective.”

In other words, let the natural economic forces assert themselves… and bring inflation into line in due course.

Right now, Powell’s message to the markets – and to the White House –  is: “We don’t see a strong case for moving in either direction.”  (In other words, they don’t have a clue on what they should be doing!)

He says only “persistently” low inflation would make the Fed consider a rate cut.

So, we just have to wait and see what happens with the economic data in the months ahead.

In the meantime, both Trump – and, apparently – investors are not happy.

We can see that in the market reaction yesterday.

Let’s see if it gets over it in the next few sessions and reaches for new highs… or whether the selling continues.

Meanwhile, we can probably expect some more withering Twitter attacks aimed at the Fed by the President.

But he needs to think beyond the short-term feel-good factor of lowering rates to keep the bull market alive.

What happens if Powell is correct and inflation is low for ‘transitory’ reasons… and something happens to spark a sudden rise?

“We see increased risks of significantly higher oil prices,” Oxford economists John Payne and Gabriel Sterne wrote in a note. “In the short-run, it is likely the supply impact will be offset by higher production elsewhere, but the market is tightening and all it would take is one more shock to supply and oil could reach $100.”

And if the price of oil does increase substantially and for a prolonged period, that will be inflationary as it feeds into utility prices and transportation costs.

If Trump got his way and persuaded the Fed to lower rates at the same time as inflationary pressures are building, it might not end well.

We could quickly move from 2% inflation to 5% or 6% or even double-digit inflation.

And as the Fed scrambles to try to contain it, by ramping up rates again…

Twitchy investors will panic and run – and stock markets will collapse for real.

We’re not there yet. And yesterday’s sell-off may not last.

But it doesn’t feel right to be piling into stocks right now – not at these levels and when the Fed isn’t looking very confident at all.