Why do planes keep crashing?

What is going on with planes?

This week, a Southwest Airlines Boeing 737 took off from Orlando Airport at 2.50pm…

And less than ten minutes into the flight, the crew radioed in an emergency landing.

The runway was cleared.

The pilots took control of the plane, and circling back, they managed to land safely on the tarmac back in Orlando. 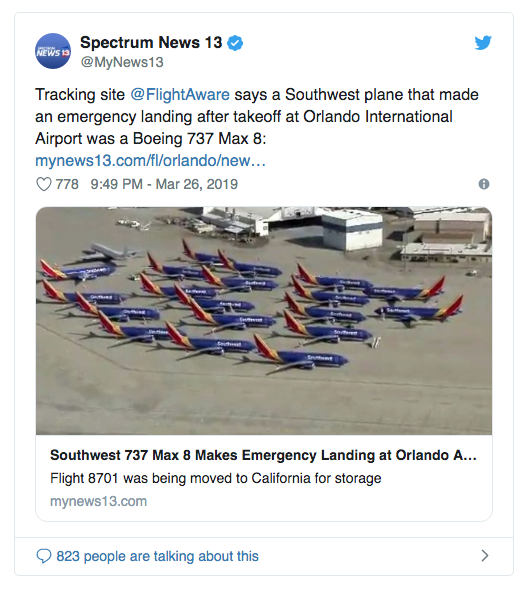 In fact, this is the third time in a few months that a Boeing 737 MAX plan has experienced sudden difficulties after take off.

Just three weeks ago, an Ethiopia Air flight crashed, killing 157 passengers on board.

One pilot was heard to say “pitch up, pitch up!” before their radio died.

The plane crashed only six minutes into its flight. 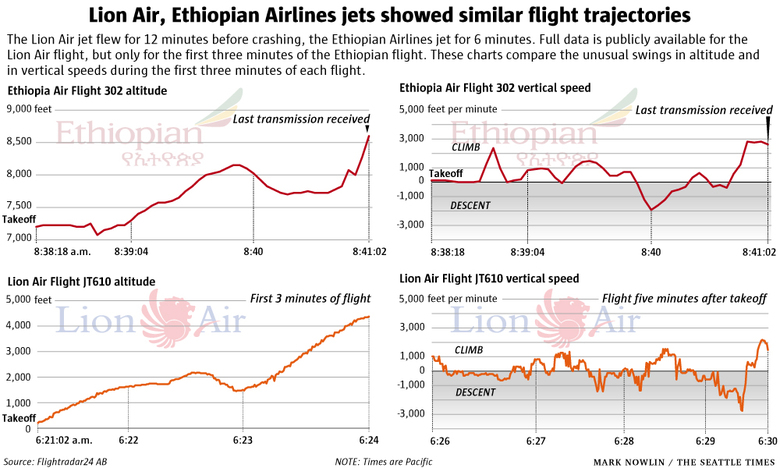 It was the same story in October, when Lion Air flight plunged into the Java Sea in Indonesia shortly after takeoff, killing all 189 passengers and crew aboard.

The Lion Air flight banked suddenly after take off…

And the plane crashed just a few minutes later.

What we know so far…

The investigations into these tragedies are still ongoing.

But the early evidence suggests is that automatic anti-stall system was activated during each disaster.

The Manoeuvring Characteristics Augmentation System (MCAS) flight-control feature was installed in the latest planes to prevent the plane from tipping during take off and landing.

“The new flight control system on the MAX, the MCAS, was added so that the new plane would behave and feel the same to pilots as the older model 737s.

It was necessary because the new model’s bigger engines, positioned farther forward on the wings, changed the plane’s lift characteristics in a high-speed stall situation.

MCAS is designed to swivel the horizontal tail so as to push the plane’s nose down automatically, without pilot input, if a sensor on the fuselage indicates the nose relative to the air flow is at too high an angle — the Angle of Attack.”

When MCAS works it stops the plane from tipping suddenly.

But without MCAS operating correctly, the aircraft can bank suddenly, even as pilots attempt to wrestle back control of the plane.

An investigation of the Lion Air flight suggested that when the anti-stall system malfunctioned, it forced the plane’s nose down more than 20 times before it crashed into the sea.

With the pilots attempting to pitch up…

And the MCAS repeatedly making corrections and overriding the pilot each time he tries to take back control.

The struggle between man and machine

As things stand, the FAA has grounded more than 70 Max aircraft and Boeing is working to update its systems.

But there is a problem here that won’t be easily fixed.

And it goes way beyond planes.

A number of Tesla drivers have now died with autopilot activated.

It turns out that the transition from human to fully autonomous systems is proving to be a lot more dangerous than we expected.

On a typical flight, pilots are hand-flying for just a minute or two on takeoff and landing

They monitor a bewildering number of sensors and signals during the flight.

But there are few occasions when they must actually take control of the plane.

On the whole this seems to have made commercial flights safer.

In 2016 the accident rate for major jets was just one major accident for every 2.56 million flights.

But while overall air safety is improving, ‘loss of control’ incidents are not.

One problem that arises in planes that have highly automated systems is that the pilots can lose track of what’s actually happening.

This is presumably what happened in 2009 when Air France Flight 447 crashed in the Atlantic Ocean on its way from Rio de Janeiro to Paris.

Airspeed sensors failed, causing the autopilot to turn itself off, but the pilots weren’t able to figure out what was happening or how to recover.

Some experts also believe that a pilot’s lack of awareness was a factor in the 2009 crash of Colgan Air Flight 3407 (pictured) outside Buffalo, New York. 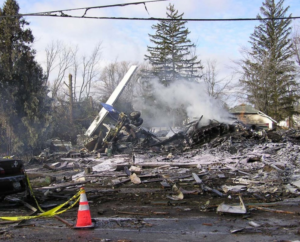 While approaching the landing, pilots may have missed the fact that the plane was slowing down too much, and again didn’t realize what was happening until it was too late.

Writing in the latest Harvard Business Review, Nicholas Oliver says that “automation can limit humans’ abilities to respond to such incidents, as becoming more dependent on technology can erode basic cognitive skills.”

This dangerous experiment will continue

Will we see humans taking back control in an effort to prevent these disasters?

It’s highly unlikely at this stage.

For the moment, transport is convinced that full autonomy is the way of the future.

Boeing and Airbus are designing self-flying air taxis, which would be used for flights of about 30 minutes and carry between two and four passengers.

A company called Volocopter has been testing autonomous air taxis in Germany since 2016 and plans to conduct test flights in downtown Singapore this year.

Elon Musk is ploughing ahead with his plans for fully autonomous vehicles.

We seem to be entering a difficult phase between machines with ‘level 3’ autonomy – which requires human supervision and occasional assistance – and ‘level 4’ autonomy – where machines take control of the entire trip.

And it seems to be very dangerous.

“I want to see mainstream autonomous vehicles, but I remain bearish about mainstream high-level autonomy. My reasons for bearishness are not related to the technology behind self-driving cars, or demand for AVs.

Instead, it’s the systemic risk that wide-scale AV deployments create.

What will change when we have numerous fully autonomous cars on the road?”

Short answer: at least a few years of chaos.