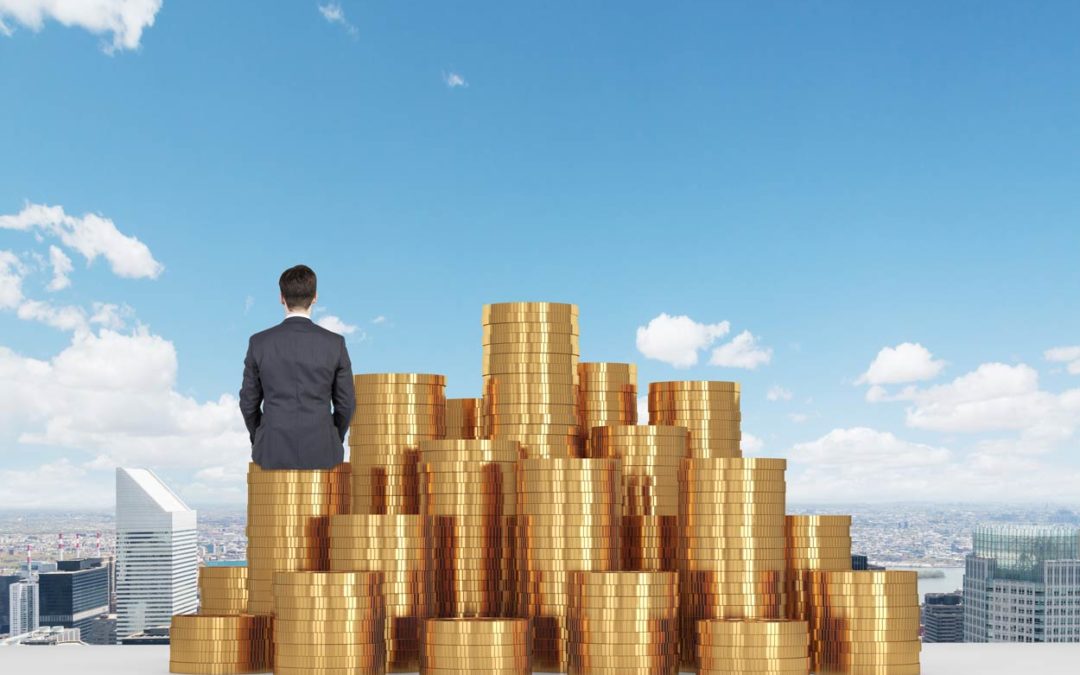 December 19th could be interesting. I’ll explain why later…

First, let’s just check in on the markets.

They don’t make it easy for us, do they?

But I suppose that’s why they’re so endlessly fascinating…

And why we spend so much time trying to figure them out.

It’s the huge potential they offer to make money… coupled with the also huge risks of losing it.

We want to believe we can take advantage of the former… whilst avoiding the latter to some degree.

That’s what draws us in.

And right now, the markets seem to me to be more fascinating than ever before… as though something momentous is unfolding.

Do you feel that too?

First, the blackest of Black Octobers.

Then an apparent recovery.

More chaos in stock markets – and the outlook for an even greater fall if the people at the top make one wrong move.

What gold’s action tells us about investor sentiment

It’s probably why gold is acting the way it is…

After 6 months of seemingly relentless selling, this time-tested “chaos haven” found a floor in August… and people started buying.

“Exchange-traded funds backed by gold increased their holdings by $1 billion in October, marking a possibly bullish shift in investor sentiment toward the precious metal.”

The World Gold Council confirms that, saying gold-backed ETFs have increased their holdings of the metal for the first time in four months.

And BullionVault, an online physical gold platform for private investors, is seeing the same thing.

According to Adrian Ash, BullionVault’s research director, “the platform has not seen such a positive response since markets were rocked by the election of Donald Trump as US president.”

Bottom line: investors want to protect their wealth. And they’re doing it by buying into the one asset that has pretty much held its purchasing power for the past 5,000 years.

It’s clear why this is.

They’re frightened about what could lie ahead in more conventional financial markets.

“[inflows into gold ETFs] confirm our view that investors are once again turning to gold as a defensive asset, offering some protection against the unexpected, whether these tail risks are macroeconomic or geopolitical in nature…”

But it’s not only retail investors who are at it.

According to yourmoney.com, professional money managers have been loading up, too.

“The risks and uncertainties in the geopolitical economy today has prompted a flurry of hedge funds to invest in more gold now than we have seen in decades.

“During 2018 we have seen a 39% increase in hedge fund professionals purchasing physical gold (privately and outside their hedge fund role) compared to 2017 citing concerns over systemic geopolitical risks.”

And not just fund managers and private investors… but governments too, or more specifically, their central banks.

Some say these are some of the smartest financial brains on the planet.

Of course, that’s open to debate, given that the current sorry state of world markets is largely on their shoulders…

Even so, it’s worrying that they’re ‘backing up their trucks’ to get large quantities of the world’s no.1 wealth protection asset into their coffers.

What do they know (or think they know) that we don’t (or do) know?

“According to data provided by the World Gold Council, central banks have bought as much as 148 metric tons of gold, which is 22 percent more than the same period last year. The Bank of Russia is leading in the purchases, which stand at 92 metric tons. Russia previously bought a comparable amount of the precious metal only at the height of the 1993 market reforms.”

But lots of other central banks have been in on the game too.

For example, Turkey and Kazakhstan were net buyers…

And according to BullionVault, Egypt bought gold for the first time since 1978, while India, Indonesia, Thailand and the Philippines re-entered the market after multi-year absences.

Collectively, central banks have been loading up on gold at the fastest pace in 6 years.

You can see that on this chart from Australian financial group, Macquarie: 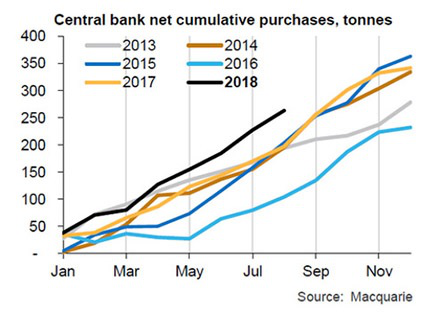 What are they up to, these super-investors?

Why the sudden attraction to old gold?

It’s about confidence in the financial system. Or rather lack of it…

Retail investors, fund managers and even the guys in charge of the finances of national governments are all thinking the same thing…

The financial system is straining… and at risk of breaking apart, bringing regular asset markets crashing down.

I have a nagging feeling it could all come to a head soon… perhaps on December 19th… or maybe even sooner.

And same as it always does, gold rallies when people lose faith in “the system”. And that’s what we are starting to see.

It’s not that it’s going to suddenly make you a millionaire by buying gold now. It’s not like that.

Gold’s purpose is to hold value whilst other markets are crashing. That’s why it makes good sense to own some…

Especially given what’s been going on lately – and what could be around the corner.

Near-death experience for the bull market

October was a write-off for stock market investors. $1.9 trillion in value evaporated from the S&P 500…

And globally, the sell-off amounted to a staggering $5 trillion destruction of corporate market valuations.

For a moment it looked like the ‘never-ending bull market’ was finally on its knees – something we’ve long been saying was overdue here at Monkey Darts.

But with November came new blood.

The market staggered to its feet again.

And for a few days, things were looking up for stocks.

The bulls were back in control, driving the Dow to a level that recovered 76% of the plunge from the 3rd October peak!

But by the close of play last Thursday it had slammed into a concrete ceiling.

And a week on from that, the Dow is 1,198 points lower… and accelerating to the downside.

The way markets have been ricocheting around lately, I’m not convinced that it’s one-way down from here…

I wouldn’t be at all surprised to see the bulls try to wrestle control once more.

That means there could be another significant bounce… before the REAL downturn starts.

Whether that comes today… or next week… I’m not going to make a guess.

But there’s too much at stake here for too many people (Trump, the Fed) to let markets freefall so easily.

Something will happen to try to calm things down and put a floor under the market.

Whether it will help remains to be seen.

But they gotta try.

Preparing for the End Times

John Hussman’s made a bit of a name for himself.

He’s a former economics professor at the University of Michigan.

But he quit in 1998 to set up and run a hedge fund and analyse the markets.

His first big call was anticipating the dot.com crash in 2000.

Business Insider quotes Hussman: “Despite its discomfort, the market decline we observed in October is only a drop in the bucket toward normalizing valuations.

“Over the completion of the current market cycle, I fully expect the S&P 500 to lose close to two-thirds of its value from the recent peak.”

What’s going to be the trigger?

We don’t claim to know that for sure, as you’ll know if you’ve been readingMonkey Darts for some time.

Could be the US/China trade wars.

Could be Trump doing something stupid – maybe starting an actual war.

Or perhaps it’s something to do with the root cause of all this mess in the first place – the Fed and other central banks’ reckless low-interest-rate campaign.

Now that they’re reversing that… perhaps that’s what brings everything crashing down.

“I have little question that Fed policy has again produced a bubble that will have extraordinarily disruptive consequences. The [stock market] advance of recent years has produced a toxic combination of extreme valuations in every conventional asset class, coupled with a breathtaking mountain of low-grade debt issued by Wall Street to satisfy the yield-seeking speculative demand of investors.”

The inference is… as that policy reverses (as it is starting to now) the bubble will pop… and conventional asset prices will collapse.

Perhaps that’s why central banks have been loading up on cheap gold?

Perhaps that’s a good idea for all of us…

What if the Fed panics?

The Fed is due to make its next decision on interest rate policy on 18th/19th December.

It’s expected – i.e. they have signalled – that they will raise rates.

That could spook markets in itself – even if we already ‘know’ the plans.  It could still be the pin that pricks the bubble.

But think about this…

What happens if the Fed changes its wise old collective mind – perhaps because of the unfolding carnage in the markets?

Let’s say they decide to change course… and keep rates on hold in December?

What would that tell investors?

It tells them that the Fed is scared – that things are WORSE than they thought.

And that realisation – that’s what could REALLY cause true panic in the stock markets… and start the bear market for real.

That’s when gold could earn its stripes.