Why Warren Buffett Has Just Done A Massive U-Turn 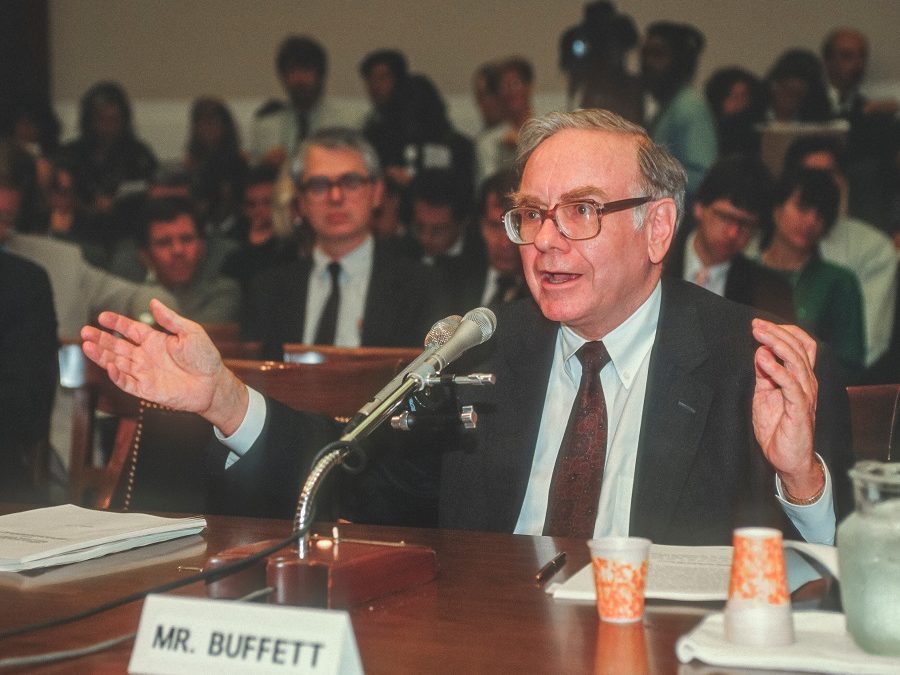 The legend of Warren Buffett is built on his ability to see what other investors miss.

And to sit out on the hot assets other investors are clamouring over.

Usually, he turns out to be right… even if people poke fun at him along the way.

In the end days of the dotcom bubble, the mania was to buy anything internet based.

But Buffett famously avoided the hyped-up, overvalued tech stocks of the Nasdaq.

Instead, he continued to buy what he’d always bought – traditional “household-name” businesses at cheap prices, like Coke, Gillette and Johnson & Johnson.

He wanted companies with what he called “economic moats”.

In other words, businesses that had competitive advantages that would allow them to remain profitable and pumping out cash over the long term.

As Buffett put it at his annual shareholders meeting many years ago:

“What we’re trying to do is to find a business with a wide and long-lasting moat around it… protecting a terrific economic castle with an honest lord in charge of the castle.”

But for a while back then at the end of the 1990s, it looked like his way of doing things was broken.

But when the bubble popped… those internet-crazed Wall Street wannabes lost their shirts.

And Buffett’s portfolio of solid, traditional businesses came roaring back.

In the same period, Buffett’s investments gained some 80%.

Buffett had the last laugh, as he usually does.

A figure of fun

Buffett’s been in the headlines again recently.

This time, he admitted he’s made a mistake.

That mistake was buying into airline stocks. (Plenty of anti-Buffett people are laughing about that.)

“The airline industry’s demand for capital ever since that first flight has been insatiable. Investors have poured money into a bottomless pit, attracted by growth when they should have been repelled by it.”

But after years of avoiding the sector, he reversed his stance and started buying in 2016.

And as we reported recently in Monkey Darts, back in February he bought a load more shares in several airline stocks at prices depressed by the Covid-19 scare.

Well, now he’s sold it all (for a substantial loss).

This from Reuters a few days ago:

“Buffett said he “made a mistake” investing in the sector, which the pandemic has changed “in a very major way” with no fault of the airlines, leaving limited upside for investors.

“It is basically that we shut off air travel in this country,” he said.

And with that, airline stocks were dealt another blow, as CNBC announced on Twitter: 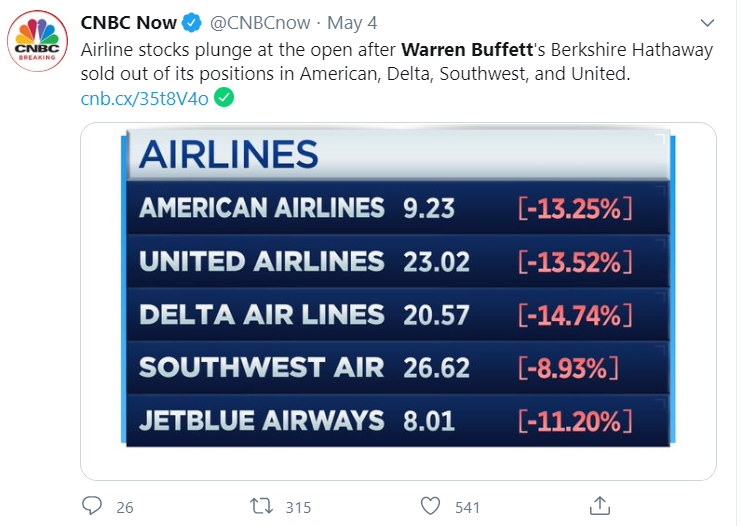 But it’s not just his U-turn on the aviation industry that’s made Buffett a figure of fun lately.

People are mocking him for sitting out of the massive rebound that’s taken place in stocks lately.

Remember, US stock markets fell some 40% from the peak to the lows during this Covid-19 sell-off.

And since then, they’ve surged more than 27% or 29% for the Nasdaq tech index.

Here’s a guy that has built his reputation and great wealth on buying when everyone is fearful.

And yet, at a time when the markets have had their biggest sell-off in more than a decade as investors ran scared from the markets, Buffett has been sitting on his hands.

So, you have to ask why that is.

Markets not attractive at these levels

Why has the world’s smartest investor not been getting his cheque book out when stocks have been on sale?

Because he doesn’t see value.

Here’s how he put it in last weekend’s Berkshire Hathaway annual shareholder presentation (done online due to the C-virus lockdown):

“We have not done anything, because we don’t see anything that attractive to do.”

And that’s a notable change to his way of thinking back in the last financial crisis of 2008-2009.

“Juxtapose that with his actions in the midst of the financial crisis of 2008. Back then, he wrote an op-ed in The New York Times a month after Lehman Brothers filed for bankruptcy: “In the near term, unemployment will rise, business activity will falter and headlines will continue to be scary. So … I’ve been buying American stocks.”

Clearly, this time Buffett is more worried about what the future holds.

“Our position will be to stay at Fort Knox.”

And that includes sitting on a huge cash pile of $137 billion, boosted by the recent off-loading of his ill-fated airline stocks.

In other words, says the NYT’s Sorkin, Buffett “is hoping to protect the company if things get worse, and he is clearly worried enough that it might.

“He said the $137 billion he had on hand “isn’t all that huge when you think about worst-case possibilities.”

Things could get worse

Whether it turns out to be the best investment decision for Buffett to make right now remains to be seen.

He doesn’t know himself which way the markets will go from here or how the economy will respond to recent central bank action.

In his own words: “I don’t believe anyone knows what the market is going to do tomorrow, next week, next month, next year.”

But he’s got a great track record of making the right calls.

So, when he’s holding back from committing new capital to the markets, it’s something to take notice of.

It suggests that he believes he’ll get a better chance to pick up assets at prices he believes are attractive.

And he’s got one hell of a better track record at this stuff than any of the chumps laughing at him.

By the way, Buffett is not bearish on the long-term outlook.

He never is. He’s an optimist, especially about America.

One of his key messages at last weekend’s shareholder meeting was:

“Nothing can stop America when you get right down to it. Never bet against America.”

It’s just that perhaps, things could get a little bit worse for stock markets before they get better.

And that’s the way I see it, especially given recent data coming out from the US.

“Far more Americans have lost their jobs in the last month than jobs gained during the last decade since the end of the Great Recession.”

Keith’s talking about the recession triggered by the Global Financial Crisis of 2007-2008.

Since that came to an end, 22.13 million jobs were created.

But over the past six weeks, a staggering 30.3 jobs have been lost due to the Covid-19 pandemic.

And yet the market keeps on chugging higher, as investors bet that the worst is behind us… and that central banks will continue to have their backs.

Meanwhile, what’s this in the Financial Times?

Yep, the smart money continues to move into gold, even as stock markets rally.

“Some of the world’s largest hedge funds are raising their bets on gold, forecasting that central banks’ unprecedented responses to the coronavirus crisis will lead to devaluations of major currencies.

“Paul Singer’s Elliott Management, Andrew Law’s Caxton Associates and Danny Yong’s Dymon Asia Capital are all bullish on the yellow metal, which has risen about 12 per cent this year. They are wagering that moves to loosen monetary policy and even directly finance government spending, intended to limit the economic damage from the virus, will debase fiat currencies and provide a further boost to gold.

“Gold is a hedge against unfettered fiat currency printing,” said Mr Yong, founding partner at Dymon Asia, which is up 36 per cent this year, helped by its bet on the gold price.

“New York-based Elliott, which manages about $40bn in assets, told its investors last month that gold was “one of the most undervalued” assets available and that its fair value was “multiples of its current price”.

This debasement of fiat currencies could well play into the hands of old gold.

And as trust for central banks disappears, gold’s appeal will grow.

“I suspect we will begin to see central banks begin to doubt each other’s creditworthiness and demand gold as payment instead of dollars or yen or euro or any other paper currency.”

The way things are going between the world’s most powerful economies – the US and China – it doesn’t take a great stretch of the imagination to see how that might happen.

So, keep hold of your gold.

And if you need more of an explanation as to just why gold is a smart investment to hold right now, be sure to listen to the fascinating chat Canonbury MD, Nick Laight, had with Adrian Ash from BullionVault.