Wild markets are great for silver 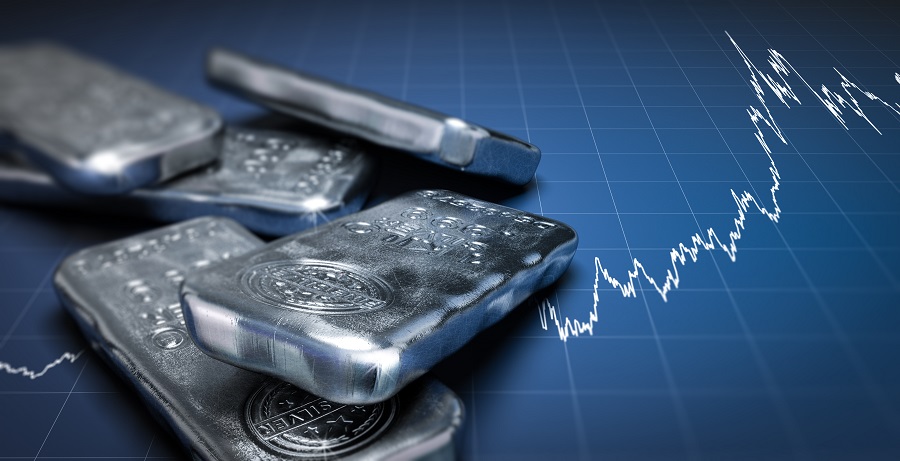 Stock markets have put in some impressive gains over the last four months.

So much so that I’ve recently started to question my own personal scepticism about the recovery.

It’s tough to keep proclaiming impending financial doom when all around stocks are shooting higher!

Yesterday the US S&P 500 index closed within 4% of its February all-time high.

But that’s nothing compared to the tech-heavy Nasdaq 100 index.

That’s where the real action’s been.

Following the initial market wide sell-off in February and March, it burst through to new record highs on 2nd June.

And aside from a pull-back to that break-out level a couple of weeks later, it hasn’t really looked back.

Well, at least until last week when another surge higher ran into some profit taking.

At one point on Monday, the Nasdaq reached a point that was a staggering 66% higher than the March lows.

But then it reversed some 6% from Monday’s peak, before having another crack at the high.

So far… the resistance at that level is stopping the Nasdaq advancing.

Is this just a pause for breath before the world’s most highly charged market resumes its move higher?

Or perhaps it’s a sign that there is further selling pressure to come in tech stocks.

And if it’s the latter, will the tech index lead the broader market lower, just as it led it higher in the past four months?

If I’ve been sounding like a broken record with my bearish bent over the past few months, forgive me.

What happens when the Fed pulls out?

Of course, we know why they have performed well. We’ve covered that extensively in Monkey Darts.

Emboldened by the promise that the Fed and friends would support the economy and financial markets – no matter what – investors have bought hand over fist.

“Central banks and governments around the world injected a massive dose of liquidity into their economies, consisting of money printing, handouts, corporate subsidies, takeovers and job protection at any price.”

“These were ignored by investors, but each one is sure to lie dormant and infect economies in years to come. The market focused on the sub-narrative that free money will always be available and end up in the stock market.”

It’s when the Fed and its counterparts around the world start to reduce the stimulus that we need to worry about.

And on that front, here’s an FT headline that caught my eye on Friday:

“An expansion of the Federal Reserve’s balance sheet has stalled, prompting strategists to pare their predictions for the scale of the US central bank’s interventions in financial markets this year.

“ [this] follows a period of modest or declining usage for the emergency programmes the Fed had put in place since March to shore up markets affected by the coronavirus outbreak.

“Another element of the Fed’s stimulus involves unlimited purchases of government debt, which have also been moderated. Declining appetite for the Fed’s dollar swap lines from foreign central banks has also been a factor, while last week the volume of the Fed’s operations in the repo market wound down to zero.”

That’s not to say the Fed is totally going to remove the punch bowl from the party.

That would cause carnage, as they well know.

And that it can reduce the free-flowing “booze” for the moment.

That’s why the Dow gave up its 262-point early morning advance last Thursday to close the day down 135.

By no means a big move in the context of recent weeks and months.

But a change in sentiment, nonetheless.

Investors would scramble over themselves to get out!

Not that it’s likely to happen any time soon.

Watch out for second quarter earnings

But one thing that could cause some excitement in the weeks ahead is the next leg of company earnings reporting.

This will show how much (or how little) companies have been pulling in over the past three months.

It’s not going to be pretty…

“Second-quarter earnings season has finally arrived. Over the next three weeks, earnings reports will dominate the news on Wall Street.

“I’ll warn you now, most reports will be pretty ugly. Of course, it’s not really the fault of the companies. It’s not so easy to make a profit when the whole world, it seems, has been locked down.

Netflix should have been doing brilliantly, surely?

With a worldwide lockdown, it must have been sucking in huge numbers of viewers forced to stay at home.

And that’s true, according to John Authers at Bloomberg – but still not as good as Wall Street was expecting:

“To a greater extent than virtually any other large company, Netflix actually had lofty expectations to meet. And even though its number of subscribers bulged as many had hoped in the stultifying conditions of the second quarter, it still fell short of expectations.”

And Authers produced a chart to show how investors reacted to the news – a sound beating in afterhours trading on the day of the results last week:

Both up and down – as investors queued up to buy the dip caused by others selling.

A week on from those results and the stock price is trading in a tight sideways range… with no clear trend.

We’ll see over the next few days whether investors still believe that Netflix has a bright future ahead.

Let’s see what else comes out from other companies, too.

Aside from the fact that the market has been propped up by central banks, it’s also been buoyed by the hope that the shock to companies’ profits from the pandemic will be short-lived.

So, investors and analysts will be watching closely.

Any major disappointments, especially from the highest flying of stocks, will be punished.

And if the problem is widespread, the market could face a rough time ahead.

More likely, it will be a mix of good and bad news. And that has the potential to feed into general market volatility.

Which could be great if you’re into the idea of shorter-term market trading.

We’ll be looking at ways to capitalise on that in the weeks ahead.

Judging by the early results of the two-minute questionnaire we sent you recently, that’s something that’s high on the wish list for Monkey Darts readers…

How about you? Have you had your say?

Please, take two minutes to tell us how we could improve your e-letter – and what you’d like to see us cover in the future.

There are exciting times ahead in the markets – and we want to make sure we’re delivering what our readers want.

So, make your opinion count and have your say now.

We’ll do all we can to make this the best e-letter we can for keen market followers like you.

The first two quarters of 2020 threw up some extraordinary events.

And that created some equally extraordinary market moves.

Not just in stock markets – but in other markets, too.

You might have seen that gold has made an impressive move this week.

It’s within spitting distance of all-time settlement highs at $1,891 set in August 2011.

And how about silver…

On Monday it exploded through a major resistance level at around $19, reaching as high as $23.03 yesterday.

That’s a 21% move in under a week. And it’s more than doubled in dollar terms in four months.

Do they smell inflation? Or geopolitical crisis (US/China going to war)?

Probably both. They’re good to have on your side in times like these…

But it’s very unlikely to be uneventful.

There’s too much uncertainty about what lies ahead in terms of economic performance, success (or otherwise) of Covid-19 vaccines/cures and geopolitical gameplay for that.

I think we should expect more big moves across all markets – equities, bonds, forex, commodities, and cryptocurrencies.

And we should see this volatility not as a threat, but as an opportunity.