Would you be happy to lock up your shares for six months? 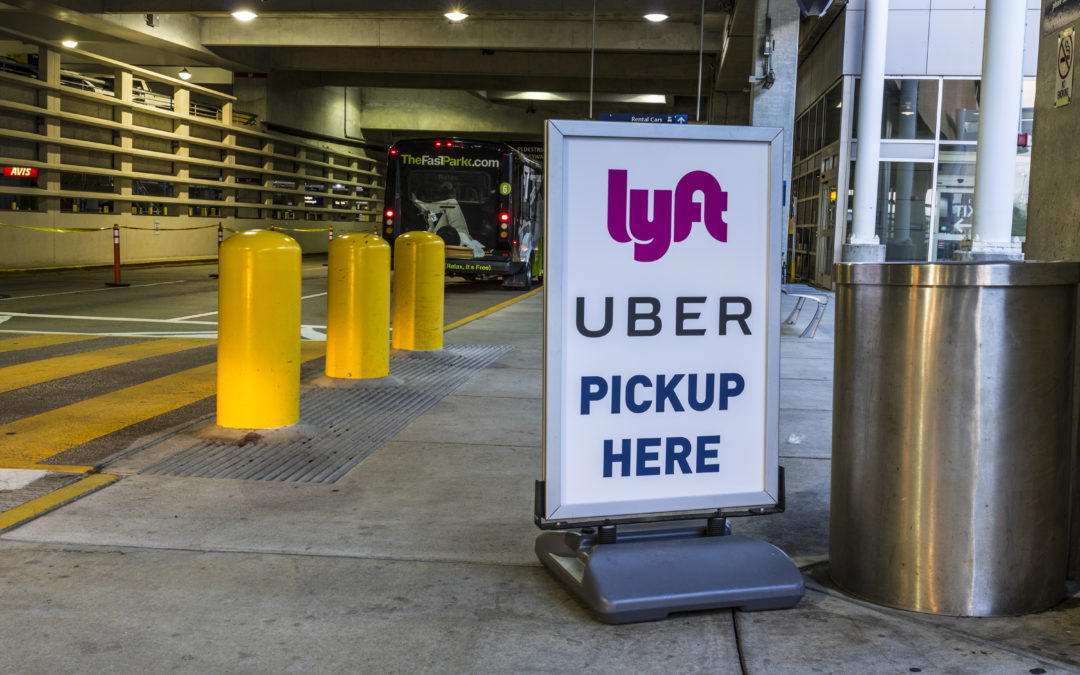 On Tuesday we sent you a quick note from Michael at Crypto Traders’ Academy.

Bitcoin and many other crypto coins are performing hugely well over the last few months.

The Bloomberg Galaxy Crypto Index is up 58.6% since the December lows.

And some of the leading coins have done even better…

In fact, Michael has been patiently waiting for the moment when the market bottoms out.

And by his estimation, it happened this week.

If you’ve seen the price action in the past few days, that won’t come as any surprise!

More on that story at the end of today’s email…

First, let’s delve a little deeper into what’s going on in the world of IPOs.

And in fact, as you’ll see, there’s a connection here with the crypto theme, too.

In both cases investors and speculators are taking big risks to chase big returns.

That’s what’s going on when a private company comes to the stock market.

And at the same time, there’s a queue of hungry investors.

They’re looking to get in on a ‘hot’ stock that’s been hyped up by the investment banks and PR firms.

Those new investors provide the cash injection the company wants by piling into the newly-listed shares.

And that gives early-stage investors – the venture capital and private equity guys – a great chance to exit with a profit.

We saw this in last Thursday’s Monkey Darts about the recent hyped-up IPO of ride-hailing company, Lyft, the number 1 competitor to Uber.

Uber is also soon to launch its own IPO.

And several other tech companies, including Airbnb, Slack and Pinterest are lining up to take the hot money too.

And it has big implications for world stock markets… and for your investment portfolio.

Early-stage investors in Silicon Valley start-ups are hoping to use the current euphoria in stock markets to cash in their chips for BIG profits.

Or when sentiment is against it…

Then you deserve to make money.

Take Michael and his followers at the Crypto Traders’ Academy.

Michael has already made a lot of money in crypto. And he’s looking to make a lot more in the next move higher.

Many people had written off the crypto markets after last year’s huge collapse in prices.

But members of the Crypto Traders’ Academy have continued to have faith in blockchain technology.

And in the potential returns from buying carefully selected cryptos.

Under Michael’s guidance, they’ve been biding their time.

And now they’re being rewarded with the big moves unfolding in Bitcoin, Ethereum and other coins in recent days.

The point I was making is that those guys cashing out of Lyft are being rewarded for backing it when it was an unproven, early-stage idea.

And they’re making many times their original stake.

Or rather they will be when they’re allowed to sell…

If they held on to their shares as the IPO went live, they must hold on to them for six months before they can sell.

“Those earlier investors cannot sell their shares for at least 180 days, known as the “lock-up” period. This is to avoid flooding the market with more shares than investors want to buy and driving the share price down.”

And although the share price opened 21% higher than its $72 IPO listing price last Friday, it’s fallen since.

It’s now BELOW the IPO price, trading around $70.

And according to the FT, Lyft us under attack from short sellers.

That’s traders who are borrowing shares and selling them in the market because they believe that the price will fall.

These guys are betting that the price will fall. If it does, they buy back the shares at a lower price and return them to the lender.

The difference is their profit.

And there is a lot of shorting going on.

“Data from S3 Partners, the analytics company, showed that by the end of its second day of trading on Monday, investors had shorted 12.4m Lyft shares worth $856m — representing 38 per cent of the available shares trading on the stock market.

“The short interest is “huge”, said Ihor Dusaniwsky, managing director of predictive analytics for S3 Partners. “There’s a lot more shorting than any IPO I’ve seen in a long time.”

“Mr Dusaniwsky said several kinds of investors were betting against the stock, including value investors who believe the share price is out of line with its profit potential, and momentum hedge funds keen to ride the falling stock lower.

With that huge short interest, Lyft’s share price could be heading a lot lower from here.

Which means that anyone who paid top dollar for their shares after the initial IPO spike will be in for a horrible ride.

At their highest point last Friday, hapless buyers were paying as much as $88 per Lyft share.

So, at current prices they’re sitting on a 20% loss.

And if the growing army of short sellers gets its way, that loss is only going to get worse.

Perhaps in years to come, Lyft will be the big success its fans think it will.

The ride-sharing trend is projected to be a massive growth business.

And Lyft is a major player and the first to come to the public markets.

But the journey for IPO investors in at the peak may be tough.

Will the venture capitalists come out OK at the end of their 180-day lock-up? Probably.

But one of the smartest investors out there isn’t taking any chances.

“Icahn invested roughly $150 million in Lyft in 2015 when the ride-hailing firm was valued at $2.5 billion. While the exact price at which the sale occurred is unknown, Icahn has likely realized a significant gain given Lyft’s $24 billion valuation when it went public.”

Icahn is a strict value investor.

And his approach and eye for value has built him a net worth of $17 billion and a formidable reputation.

When he first invested in Lyft, Icahn said “ride-sharing is poised to become a fundamental component of our transportation infrastructure”.

He saw value in the company in 2015 and backed it.

But he clearly didn’t believe Lyft offered sufficient value to hold on.

And perhaps he expects the shares to become a lot cheaper.

Which doesn’t bode well for late-comers.

And frankly, it doesn’t bode well for other IPOs in the pipeline… or the wider stock market.

What must Uber’s founders and early investors be thinking having seen the performance of Lyft’s shares?

They may be starting to get a little worried.

Did Lyft’s bankers price the share too high at the IPO?

They knew there was a huge appetite for the shares.

And from the way the general market has been shrugging off threat after threat and rising, they knew that investors are bullish (or complacent).

The perfect time to bring the company to the market.

What’s going to be interesting is how the share price reacts when early stage investors head for the exits.

Lyft’s registration date as a listed company is 28th March.

So, the 180-day ‘lock-up’ period during which the VC investors and insiders cannot sell ends on 24th September.

Let’s see what happens on that day.

With all that new supply of shares hitting the market – and the weight of short positions – there could be a major slump in the price of Lyft stock.

Meantime, the talk is of Uber’s IPO happening later this month.

You’re going to be hearing a lot about that in the news.

It’s a far bigger company than Lyft in terms of revenues. And it loses far much more money than Lyft each year!

Still, you’ve seen what happened with Lyft shares. The IPO was vastly oversubscribed. And the shares shot higher as trading started.

Investors will line up for Uber stock.

better off waiting to pick up stock at a cheaper price… if at all.

And perhaps they’ll see other opportunities that look better value.

This IPO story has a long way to run – and we’ll keep an eye on it here in Monkey Darts.

It could be an integral player in where the main stock market heads from here.

The new bull market in crypto has just begun

Now to the wild world of cryptocurrencies…

Many of these coins are performing hugely well over the last few months. 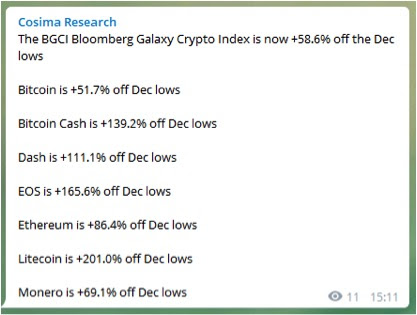 Anyone who has been following Michael at Crypto Traders’ Academy would have sold out at the top of the market.

He sent a series of bulletins warning members of Crypto Traders’ Academy to jump ship before the market topped out in 2017.

A severe crash followed, as you know.

Investors have rushed out of the market.

In fact, this same thing has happened four times in the crypto market.

And each time, Michael has invested heavily, at the bottom of the market, and ridden the waves of the new bull market to the top.

In fact, Michael has been patiently waiting for months for signals that the market has bottomed out.

And that’s what happened this week.

As Michael said on the note we sent you on Tuesday…

We’ve spent months bouncing along the bottom and now we have the chance to start making very healthy gains again.

How high could these coins go in this next cycle?

But as I said in my recent Market Bottom report, the average of the 44 previous crypto cycles I reviewed was 6,000% from the very end of the bear phase to the peak of the bull phase which is massive and these patterns have repeated many times!”

If you would like to see Michael’s in-depth report on the crypto market, then drop us an email.

We are making it available to Monkey Darts subscribers.

OR you’re just curious about how you could profit in the bull market that’s getting underway.

Just drop us an email to: [email protected]

And we’ll send it on over.