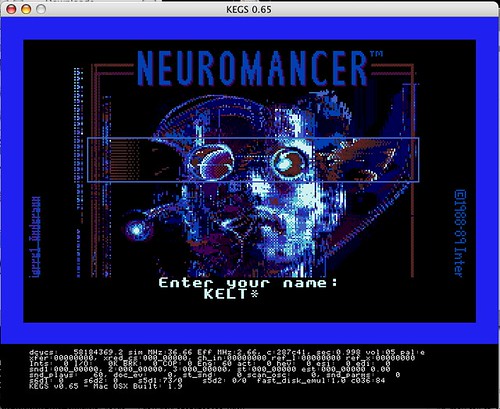 In his 1984 science-fiction novel Neuromancer, William Gibson lays out a chilling vision for a tech-obsessed society.

It tells the story of a low-level hustler in the dystopian underworld of Chiba City, Japan.

Once a talented computer hacker, Case was caught stealing from his employer and as a punishment his central nervous system was damaged with toxins, leaving him unable to access the global computer network, a virtual reality landscape called the “matrix”.

In this world, being cut off from the matrix is death.

Practically everyone in the book has some sort of brain implant that feeds off it – chips, prosthetics, brain implants – all working to improve their intelligence, memory and ability to communicate and sense their environment.

In fact, the main source of entertainment in this future is a Simstim (simulation/stimulation): a live broadcast of the sensory experience of one person into the brain of another.

To the person experiencing this broadcast, it feels like viewing the world through another person’s eyes, hearing with their ears, feeling with their skin.

It’s the full sensory stimulation of another person.

In fact, brain implants that help improve our faculties for speech, memory and perception are not too far away.
Take Neuralink: an experimental device that was recently unveiled by Elon Musk.

Neuralink consists of a small device worn behind the ear, that collects information from a series of ultrafine threads that are implanted directly into the brain.

It sounds incredible.
But according to Musk, the technology has already been trialled on rats and monkeys. And he is looking to start testing on human volunteers in early 2020.

How will it work?

Well first a Neuralink surgeon will drill four 8-millimeter holes in your skull.

And then he will begin carefully threading electrodes through the holes with thin needles. A robot with advanced vision systems will help guide the threads into the brain so that they avoid blood vessels. And these ultra-thin threads can be inserted at different locations and to different depths, depending on the experiment or application.

The firm says the robot has implanted threads in 19 animals and was “87% successful”, recording data on up to 1,500 neurons at once.

In Scientific American, Leigh Hochberg, a professor at Brown University, calls the Neuralink system “novel and exciting”. “Given the great potential that intracortical brain-computer interfaces have to restore neurologic function for people with spinal cord injury, stroke, traumatic brain injury, or other diseases or injuries of the nervous system, I’m excited to see how the company will be translating its system toward initial clinical studies.”

And it is exciting in a way. In its current form, the device carries 1,024 electrodes worth of threads, which is around 10 times more data acquisition than is possible with current medical devices such as those used to treat Parkinson’s via Deep Brain Stimulation.

Perhaps the gold standard in neural recording is the Utah Array, which consists of a rigid, postage-stamp-sized grid of up to 128 electrode channels. 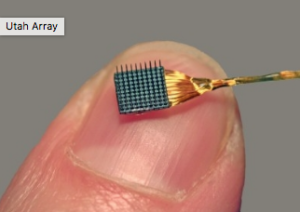 This array has been successfully used in the BrainGate device developed by researchers at Brown University and their colleagues.

But it also causes a tissue response that can lead to scarring of tissue composed of glia (the brain’s support cells), which may interfere with the quality of recorded signals or cause damage to brain cells.

So safety is a major issue.

One of the big problems with brain implants is that they can damage vasculature when the brain moves.

This is a huge problem because the brain moves a lot: with every breath and heartbeat.

The brain is also oatmeal soft and highly resistant to foreign bodies.

Matthew McDougall, Neuralink’s head neurosurgeon said their system is “only intended for patients with serious unmet medical diseases” and will target people with complete paralysis due to an upper spinal cord injury.

The Race to Jumpstart Your Brain

Still, Neuralink is certain to have plenty of competition.

Over the past decade, the Pentagon has financed research both for basic brain sciences and to develop robotic control systems that can be used to control prosthetic devices. And they are not alone in making serious headway with this stuff.

The Defense Advanced Research Projects Agency (DARPA) have been able to create devices that allow quadriplegics to independently manipulate robot arms to perform tasks like drinking.

DARPA has even thrown its weight behind the development of a ‘cortical modem’, a direct neural interface wired right into your grey matter.

At Clemson University in South Carolina, Ganesh Venayagamoorthy is busy teaching neurons to run everything from power grids to stock markets.

And Sony has registered patents for technology that plants sensory input directly into the brain using radio waves and compressed ultrasound.

My view is that we will use less invasive devices for stimulating the brain.

These will include psychedelics: there is some fascinating research on the positive effects of psilocybin on patients with depression and schizophrenia for example. It’s a huge story, and one I’ll return to another day. We are also seeing the use of brain nets for brain-to-vehicle technology and affective computing. You can read my full report on that technology here: 3 Ways Your Brain Can Be Manipulated

The signs are that these implants will be used on people with serious brain conditions within the next few years. And I wouldn’t be surprised to see people experimenting with non-invasive versions of their own.

My hunch is that we will use these devices to activate a number of new senses in the brain. These could include an ability to tap into AI or the flow of information from the internet. It might involve exchanging sensory experiences.

Mark Zuckerberg speaks of an almost telepathic means of communication by 2030, “we are going to be able to communicate our full sensory experience to someone through thought via head wear than can scan our brains and then transmit our thoughts to our friends much as we share baby pictures on Facebook today.”

In the short term, just as William Gibson predicted, we might see brain implants come to market that will radically improve our intelligence, memory and ability to communicate and sense our environment. You can watch the highlights of Elon Musk’s presentation here