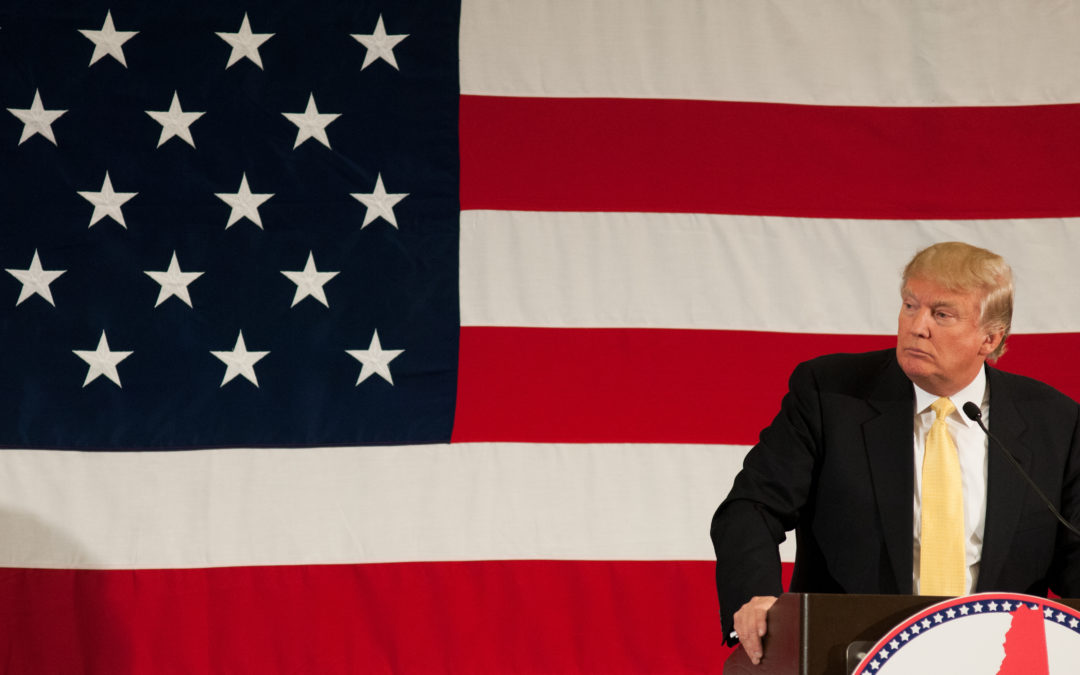 When I wrote to you last Friday it came on the heels of the Fed playing hard ball and refusing to cut rates.

“We’ll let the economy do what it wants… and we’ll help it if it needs help. For now, we’re cool…”

That was the gist of what Fed boss, Jerome Powell, told the markets.

Remember, one of the Fed’s key objectives is to keep inflation at 2%.

But for years the Fed has had difficulty hitting that 2% level. And it’s below that now, at just 1.6%.

And that’s despite 10 years of low interest rates and other stimulus (quantitative easing).

And to steer inflation to the Fed 2% target.

It’s so far been unsuccessful at keeping at that level for any sustained period.

One way to boost inflation would be to lower interest rates – and therefore make credit cheaper.

It encourages companies and consumers to borrow and spend… and stimulates business activity and ultimately profits.

And that’s what the markets wanted, clearly. Which is why they sold-off last week on the Fed’s ‘no rate cut’ news.

But the way Powell explained it, “some transitory factors may be at work”.

He sees those passing… and inflation coming back:

“Our baseline view remains that, with a strong job market and continued growth, inflation will return to 2 percent over time and then be roughly symmetric around our longer-term objective.”

Well, after the initial sell-off last Wednesday and Thursday, the market seemed to get over it.

And for a moment it looked like stock markets were set to blast into new uncharted territory… BOOM!

But if you can rely on bloke to shake things up, it’s Donald Trump.

And sure enough, he did it again over the weekend, firing off tweet after tweet attacking China’s unfair trade advantage.

Déjà vu all over again!

Here at Monkey Darts, we’ve long suspected that there would be more to come on the trade war story.

It’s been off the radar for a while, with hopes pinned on some miraculous deal being reached to save the day.

But it didn’t seem likely that it would be as smooth as that.

Ever since this trade war story started back in 2017, hoped-for breakthroughs and agreements have led to disappointment and impasses.

We’ve seen it all before… and we’ve been expecting to see it again.

And true to form, the President opened fire on Beijing at the weekend. 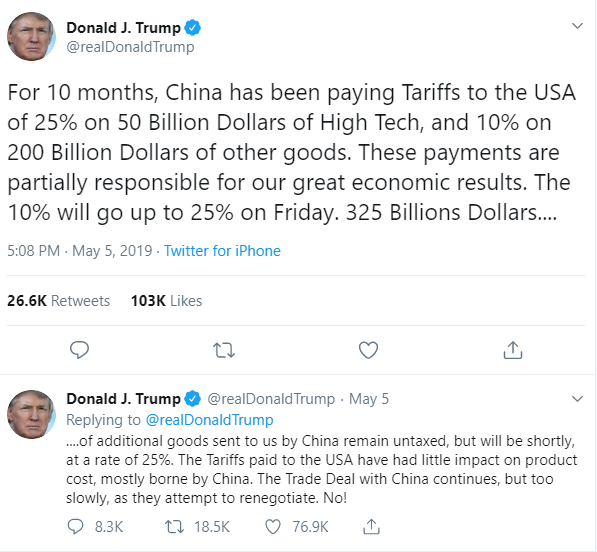 Were we wrong when we suggested last week – and have done so before – that Trump is desperate for markets to go up, to keep voters on side?

That’s why the hapless Jerome Powell always gets it in the neck from Trump for not cutting rates.

“The market always goes up!” – after a 10-year bull market, that is the view of the complacent investor.

And that’s the myth Trump wants to perpetuate – at least on his watch… and certainly until he’s safe in the White House for a second term.

So, why is Trump now seemingly crashing the market?

As soon as his tweets hit the wires, stocks sold off – in China and other Asian markets first… and then in Europe and the US as panicky investors read the news.

The main reason the market has been going up so relentlessly since the Christmas Eve low is that investors have been betting on an end to trade war fears.

So, when that outcome is under threat, it’s no wonder investors run for the exits.

And it could get worse from here, according to legendary investor, Jeff Gundlach of DoubleLine Capital.

“I think we are going to keep seeing more tension,” said Gundlach. “I think the 25% tariff bump is better than 50% chance. The market obviously does not want to see increased tariffs, so it’s been kind of reacting to that.”

Gundlach makes a good point when he says there are egos at play here.

Neither side wants to back down.

As Gundlach puts it:

“Both the premier of China and the president of the United States want to come across that they prevailed and didn’t give in… I think you’ve got an irresistible force meeting an immovable object.”

It’s a case of wait and see.

There’s a chance Trump could be bluffing.

So, he’s not really trying to crash the market.

So that when that deal is announced… the markets react violently to the upside and Trump looks like a hero.

Escalation on the cards

But more likely is that he’s so furious with the Chinese for trying to renege on previous commitments, he’ll make them pay.

And as we’ve seen time and time again, when Trump tries to hardball China, China doesn’t lie down and take it…

The official statement from China’s commerce ministry makes that clear:

“China deeply regrets that if the US tariff measures are carried out, China will have to take necessary countermeasures.”

Let’s see what comes out today as the two sides sit down and thrash things out in Washington DC.

US stock market futures are pointing lower, suggesting it could be another day of losses on Wall Street.

Meanwhile, the VIX has been spiking in recent days – a sure sign that fear is back in town.

To remind you, the VIX is a volatility index.

That’s because it measures how much “insurance” traders are prepared to stump up to protect their portfolios.

If the VIX is high, it’s because people are scared and buying lots of ‘put’ options to hedge against a stock market fall. (‘Puts’ increase in value if the market falls.)

And when it’s low, it’s like investors don’t care.

They’re not worried about stocks falling. They have no fear.

They only see rising stock prices.

For most of the year so far, the VIX has been trading near its lows.

But this week, it’s surged as fear returns:

Investors are protecting their portfolios in case this trade war really goes up a gear… and the stock market sell-off intensifies.

That could be a smart move.

They don’t necessarily want to sell all their stocks – in case there is more upside to come.

So, buying options that would increase in value if the index falls means they can hold on to their portfolios and offset their losses.

In the meantime, this trade war talk has had another effect…

There’s been increased interest in assets that aren’t closely correlated with stock markets.

Gold, for example, has been languishing for the last few months.

But there’s been a move higher of almost 2% since Trump set to work with his tweets at the weekend.

And that’s a move that’s likely to accelerate if things go badly on the trade deal today and tomorrow.

And did you see Bitcoin and the crypto space?

While the Dow Jones index has fallen 3.5% since last week, Bitcoin is up 14%.

It’s as though investors are seeking other places to put their money to work.

That makes a lot of sense when stock markets are trading at elevated levels and there are major threats on the horizon.

Gold should be a part of your portfolio. We’ve long made a case for that in Monkey Darts.

And it makes sense to have some exposure to the crypto markets too.