How Donald Trump’s recent twitter blasts could crash the market 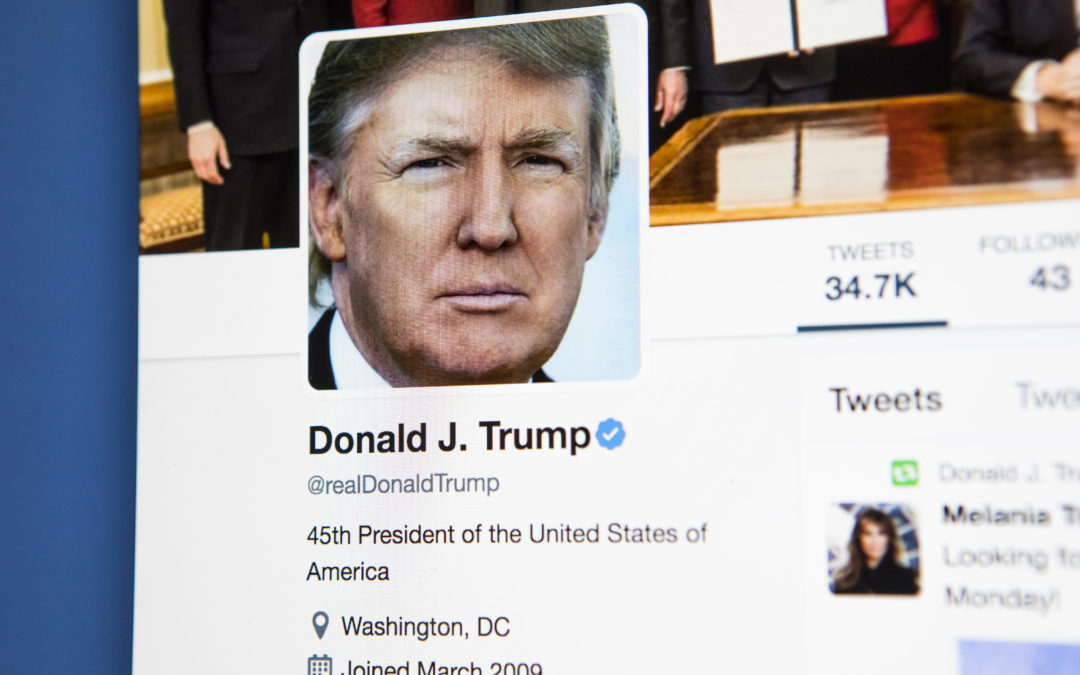 Donald Trump is well known for using Twitter to get his message out.

And as we’ll explore today, it’s become an important force in our world of money and market madness.

Because how he uses it can have substantial effects on market prices.

A market might be doing brilliantly one day. Look at the Dow Jones, for example. It’s on fire!

But then…Trump gets up in the middle of the night and tweets something that threatens that narrative…and the market can suddenly turn.

Of course, that’s true anyway – there’s always something that can come along and change the narrative of the market…

But the Trump-tweet phenomenon adds another dynamic.

We’ve seen it time and time again over the past two years.

And it’s something one of the world’s oldest and most respected financial institutions has been doing a lot of research into.

They’ve been looking at how to measure Trump’s effect on financial markets.

We’ll take a look at that in a minute. And we’ll think about ways we can protect ourselves from Trump-tweets.

But before we get to that, let’s see how Trump learned to use Twitter to his advantage.

Long before he got the front door key to The White House, he used Twitter as a tool for self-promotion.

His first tweet, in May 2009, urged Americans to tune into a TV show he was on:

A couple of months later he used the platform to stoke excitement about a new book he had out: 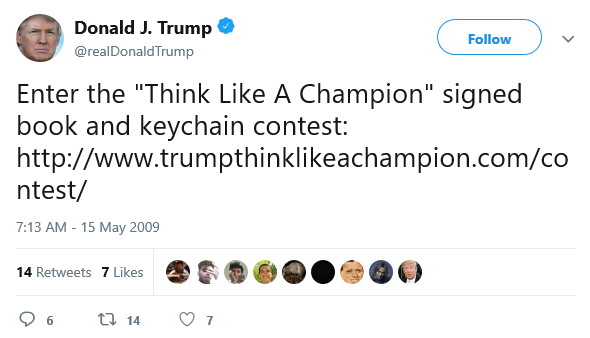 And he used it to drum up support for his wife’s business, too:

It was purely about making money.

But a few years later, when he became serious about running for the Presidential office, Twitter became a major tool for undermining opponents.

That was the date of the first “presidential Twitter Town Hall”.

The event was moderated by Twitter CEO, Jack Dorsey and the President answered via live webcast.

As The Outline explains:

“It’s all too familiar to us now. The alarmist tone, the arbitrary capitalization, the authoritative “hot take” on a complex issue squeezed awkwardly into 140 characters. This is the @realDonaldTrump of today, and it was born on July 6, 2011, at 10:38 AM.”

But that was just the beginning.

Trump soon realised the power of Twitter as a political tool.

The Independent says he uses it “to mount vigorous attacks on political opponents, news outlets and people who have criticised him, often sending out posts in early-morning or late-evening flurries.”

And as Trump himself admits:

“I doubt I would be here if it weren’t for social media, to be honest with you.”

“Tweeting is like a typewriter,” he told one news channel. “When I put it out, you put it immediately on your show.

“When somebody says something about me, I am able to go bing, bing, bing and I take care of it. The other way, I would never be getting the word out.”

And he can use it to dramatic effect in our world of money.

We’re all familiar with the way Trump uses Twitter these days to attack his opponents or to humiliate people.

At Monkey Darts, we regularly observe and report on this phenomenon…

For example, we’ve seen how he belittles, Jay Powell, the long-suffering Chairman of the Fed and accuses him of being “clueless” …

… and questions Fed policy, telling them they should be slashing interest rates by 100 basis points to keep the economy strong (and supporting the stock market for his own ends ahead of the 2020 election).

In fact, here’s a Tweet from Trump on Wednesday, laying into Powell AGAIN and demanding the Fed cuts rates to below zero: 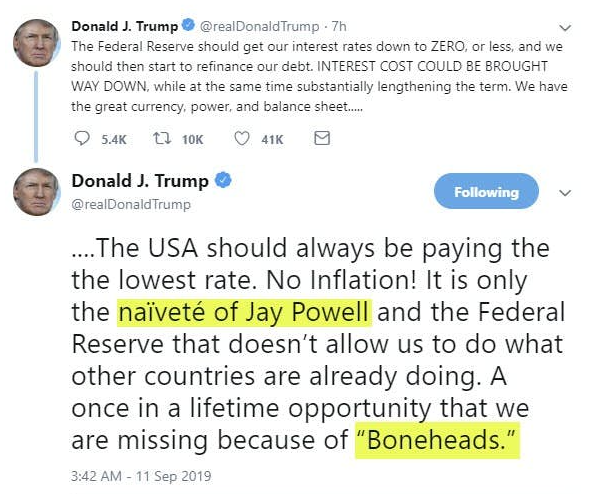 Have you seen the Dow Jones in the last couple of days?

It makes investors aware that the President has their back. That he’s keeping the pressure on the central bank to cheapen borrowing… and promote business.

Look at the Dow – that small blue arrow is pointing to the 3am candlestick.

That represents the trading between 3am and 4am on 11th September – the time when Trump had a go at the “Boneheads” at the Fed! 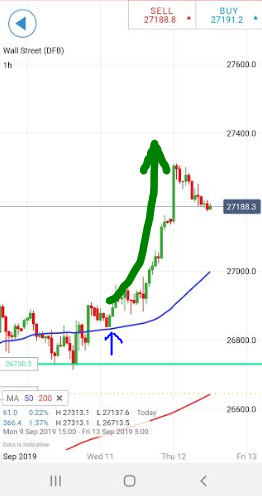 And you can see how the market reacted…

Of course, Trump’s tweets can have the opposite effect, too.

He’s caused numerous stock crashes when he’s tweeted about some company or other.

Like when he tweeted this about airline company, Boeing, in December 2016, shortly after winning the Presidential race: 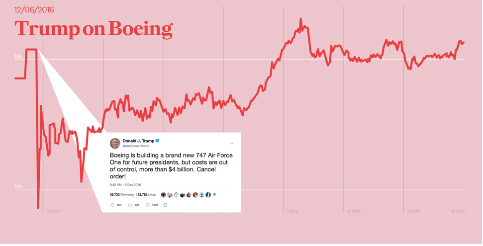 As it turned out, the $2 per share dip was a temporary one.

The White House rushed out a message to calm the market and Boeing’s share price soon recovered.

But it shows the power of Trump’s tweeted word when it’s read by traders hungry for an edge in the market.

And here’s another example from January 2017, when Trump tweeted about Toyota making cars in Mexico:

And here’s how it hit Toyota’s share price as traders bet on the company facing a huge tax levy which would hit its bottom line: 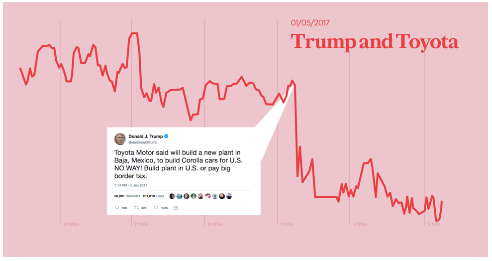 That move led to a $1.2 billion drop in Toyota’s market valuation, according to Ogilvy’s research.

The point is, Trump’s tweets can move markets.

And it’s something US banking behemoth, JP Morgan, has been studying closely over the past couple of years.

One of Trump’s most famous tweets was a botched, incomplete one sent in May 2017, a few months into his Presidency.

What Trump meant to write was “coverage”.

But for whatever reason (fat fingers?) it was sent with the famous “covfefe” typo and with the sentence incomplete.

As the tweet went viral, Trump was mocked around the world (search “covfefe meme” and you’ll get a flavour of it…)

Whatever, the guys at JP Morgan have used a combination of the words “volatility” and “covfefe” to create their own word “Volfefe” (pronounced vol-fey-fey).

Volfefe is the name of JPM’s new index, used to measure volatility in the market caused by Donald Trump’s Twitter blasts.

“Named after the president’s baffling “covfefe” tweet of 2017, the index seeks to determine how much @realDonaldTrump shakes up the bond markets. The short answer: quite a lot.

“The president’s remarks . . . have played a statistically significant role in elevating implied volatility,” the three-strong team at JPMorgan in New York wrote in a note released late last week. “Market-moving tweets have ballooned in frequency this August.”

Of course, the impact of tweets from the leader of the free world depends on their content. His fondness for slating London’s mayor, retweeting rightwing polemicists or lashing out at the “fake news” media, is unlikely to move the dial.

But his increased focus on trade talks with China, and on monetary policy, is a significant switch. On the latter front, it is worth bearing in mind that Mr Trump has taken aim not only at Fed chair Jay Powell (“where did I find this guy Jerome?” he lamented last week) but also at European Central Bank head Mario Draghi, who he believes has been “very unfair to the United States!”. The prospect of currency wars directed on Twitter is worth taking seriously.”

This is what I mean when I say we shouldn’t get complacent about rising stock prices.

It’s true to say that the Dow Jones is closing in on all time highs as I write on Thursday afternoon.

That comes on the back of news of a delay in higher US tariffs on Chinese imports and a rate cut from the European Central Bank.

By the time you read this, the Dow may well be in uncharted territory – higher than it’s ever traded before.

‘Trade and monetary policy have become an increasing focus for the executive branch, and everything from casual sentiments to seemingly formal policy intentions have been disseminated, globally and instantaneously, via this carefully scrutinized social media platform.

‘In response, a broad swath of assets from single-name stocks to macro products have found their price dynamics increasingly beholden to a handful of tweets from the commander in chief.’

All it takes is one middle-of-the-night tweet from the President that spooks traders and the markets can turn.

Right now, traders are buying the market narrative about the US-China trade talks due to take place next month.

And they’re buying the narrative that falling rates will support markets.

While they continue to believe those narratives, then stocks could well continue rising. So, this isn’t the time to cash in your portfolio of shares.

But it might be worth taking profits from stocks that are overstretched and that will be affected by a weakening global economy.

And it’s certainly worth spreading your risk by holding alternative assets that are not so closely correlated to the stock market.

That way, if Trump kicks off a panic in the market, at least you’ll have some portion of your portfolio that holds value.

Gold, silver and cryptocurrencies look like they fit the bill.