News from Detroit Points to the Market Chaos Ahead 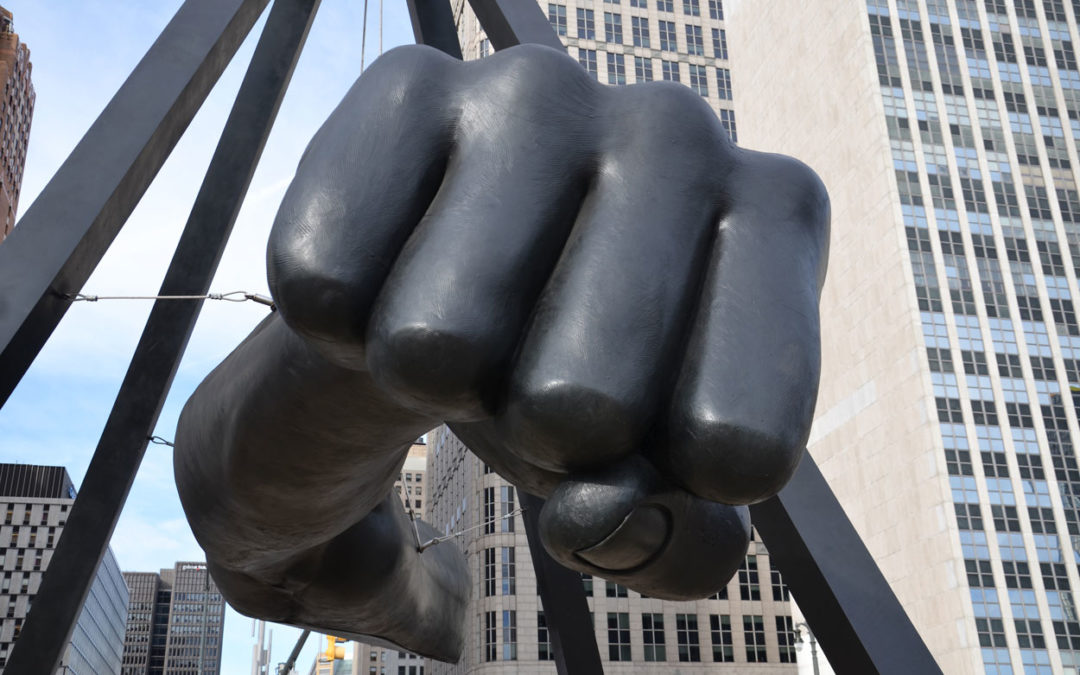 It’s the end of a day of entertaining at a regular annual celebration.

This is your favourite time of year. You’re having a break from the regular routine of work, school runs, commitments.

The family is together. Worries are – momentarily – put on hold.

Your house is filled with guests: your brother and sister and their families; your parents; an uncle who’s travelled from the other side of the country to join you for the weekend with his family.

Happy times… before the shock news

It’s a happy time. A time to catch up on what you’ve each been up to over the year. And to be grateful for all that you have.

There’s laughter from the kids’ bedrooms as they catch up with cousins they’ve not seen for six months.

And music drifts down the stairs as they swap latest band tips on Spotify.

Delicious smells from the kitchen still fill the house.

It’s taken you and your family several days to prepare the traditional feast.

And several hours for your contented party to devour it along with the fine wine you’ve chosen for the occasion.

Now that the meal itself is over, and the washing up is done, it’s time to relax and enjoy one another’s company, with music, games and another glass of wine.

But then something catches your attention.

At the far end of the room, the kids have left the TV on.

The volume is down. But you can see that the news is on.

On the screen, you can see your employer’s company logo…

The dour face of news anchor, Fiona Bruce, as she shakes her head slightly and frowns in that concerned way of hers…

At first, you’re just curious and a little surprised.

Of course, you feel sorry for anyone in those parts of the country affected. What a horrible thing to happen – and at THIS time of year!

It’s horrible, bleak news and a sign that things are worse than you thought at your company.

But you’re not immediately concerned for your own position.

Because although it’s been well-known that your industry is under pressure, only last week you received a letter telling you you’re your job was safe.

In fact, that was one of the things you specifically said you were thankful for as you celebrated with your family this weekend.

A safe job. An income to cover the bills and the luxuries you’ve come to enjoy for your family. Some security for the future.

But then, when you turn up the sound on the TV, the shock hits.

You discover that in fact, the place you’ve been working for the past four years IS one of those affected.

Your plant IS closing.

You ARE going to lose your job.

And suddenly, your future well-being IS under threat.

And one that I’m sure that keeps many of us awake at night in these times of uncertainty.

Wikipedia describes GM as “the largest American automobile manufacturer, and one of the world’s largest”.

Detroit is well-known as the centre of the US automobile industry, home to the HQs of the “Big Three” – GM, Ford and Chrysler.

But the rot set in decades ago for Detroit.

It was too reliant on its car industry. It suffered more than most US cities during bad times because it didn’t diversify.

As historian, Kevin Boyle, explains, the Detroit auto industry “was like Silicon Valley in the 1980s. It was doing so well, that Detroit officials didn’t see a need to do anything differently.”

The city is still the centre of the industry.

But it’s a shadow of its former self in the golden era of the 50s and 60s.

And the problems are evident at its most famous company.

Not least because its recently attracted the anger of President Trump: 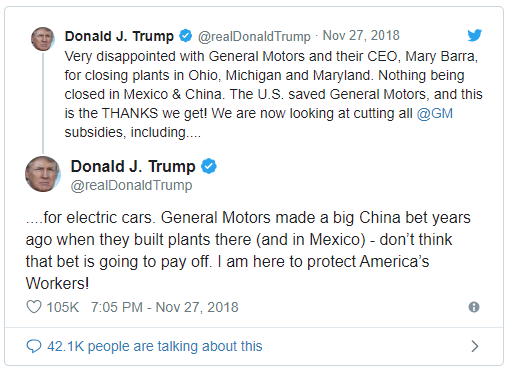 One of those jobs he wants to protect belongs to Dnitra Landon.

On Monday, during family Thanksgiving celebrations at her home in the Detroit suburb of Redford, she heard her fate.

She’d had no warning from her employers this might be happening. Far from it, as reported on the Detroit Free Press:

“Just two weeks ago, Landon said, the plant’s union representatives put rumors of layoffs to rest with a letter to workers. And then came the surprise Monday.”

Instead, she heard it on the news.

That makes her mad.

“You tell the world before you tell us. The world don’t come in here every morning at 6 o’clock to work for you, so how come we don’t get to know before the world?”

The end of the good times

Meanwhile, one of her co-workers, Chris Monroe, heard the news in a text message.

Imagine that. Rather than your boss telling you face to face you’re losing your job… you get a text from a friend with the bad news.

That reminds me of something that my wife told me years ago.

She was working at a tech company that made websites for the financial industry. Making serious money for a 27-year old.

And the company she worked for were in the habit of holding lavish champagne fuelled parties for their staff. Presumably to celebrate how easy it was to make money.

This was in December 2001. You know, at the height of the dot.com bubble.

But then suddenly, things went wrong.

All the companies developers were fired, en masse, on Christmas Eve via a bulk-send text message.

What a way to go… the day before Christmas.

The bubble had popped.

The economic environment had changed. And the good times were over.

The business had to adapt and slash costs to try to survive.

Sadly, those overpaid developers had to be sacrificed to that end.

(My wife lost her job, too. But she was a web designer. And as they had projects on the go, the company hired her back. At a significantly higher rate than before. But eventually the company went under. She’s far happier now as a teacher.)

And it’s no wonder poor old Dnitra Landon in Detroit is feeling sick, too.

But what can GM do?

According to a ABC News, “GM estimates “recent trade policy changes” have cost them $1.4 billion this year alone.”

That and the fact that GM is way behind in adapting to a shift in the global car market.

“The company “is trying to get ahead of a potential crisis by making cuts now,” Michelle Krebs, executive analyst at Autotrader, said, noting that GM is reacting to a weaker market in China and weaker demand in North America, its two biggest markets.

“GM is actually a tad late to adjusting its product line and production capacity to the dramatic car to utility shift. Ford and Fiat Chrysler already revealed their plans to largely abandon traditional cars,” Krebs added.”

The bottom line is that one of America’s 10 largest companies is in trouble. Sales are slowing. And they are hunkering down.

And one of their fiercest rivals is playing the same game.

Ford is also forecast to axe 20,000 jobs in North America too, notes the Detroit Free Press.

“Coming out of the recession, automakers laid off workers and cut plant capacity. … They’ve gotten a bit complacent. As the good times came, the companies added people. Companies like Ford have said maybe they added too many. So now they’re preparing for the next dip. They’re preparing for potential downturn.”

The signs are that the boom times are over.

And that could be the canary in the coalmine telling us to prepare for the worst for the world economy as a whole.

Stocks rally… but for how long?

What are the stock markets telling us?

Well, they had a great day yesterday, didn’t they?

The Dow and S&P American indices surged more than 2% for some unfathomable reason.

It was Fed chairman, Jerome Powell’s upbeat statement to the Economic Club of New York yesterday that did it…

He said, according to the New York Times, “the Fed’s benchmark interest rate was “just below” the neutral level. Investors took that to mean that the central bank would stop raising rates soon.”

But he didn’t actually say that rates would stop rising.

And more than likely just a cynical move by the Fed to give the markets a shot in the arm and keep Mr. Trump from blowing his top!

So far so good… but let’s see what happens if the Fed sticks to its official script and rates do keep moving higher in 2019.

If they do, it could be bad news for carmakers like GM and Ford, the property market and the stock market indices themselves.

They won’t like having the cheap credit drug taken away.

“Real estate and autos are the two sectors in the economy most sensitive to rising interest rates. Most Americans have to borrow money to buy a home or a vehicle. As the cost of borrowing rises, sales will naturally fall.

“For nearly a decade, the Federal Reserve held interest rates artificially low. This helped blow up bubbles in both sectors. Easy money did exactly what was intended – it stimulated buying. Now that the Fed is attempting to reverse its policy and “normalize” interest rates, the air has started leaking out of these bubbles.”

Schiff believes it’s about to get worse, not better, for investors:

Which begs the question, if he’s right, was yesterday’s 2.3% surge in US stocks all there is to this ‘correction’ higher?

Or is there more upside to come… before the bear really takes hold?

But for my money, we need to get the next Fed policy meeting on 18th and 19th December out of the way first to see what Jerome Powell has up his sleeve.

Meantime, consider preparing for the worst by getting some exposure to the world’s oldest store of value: gold.