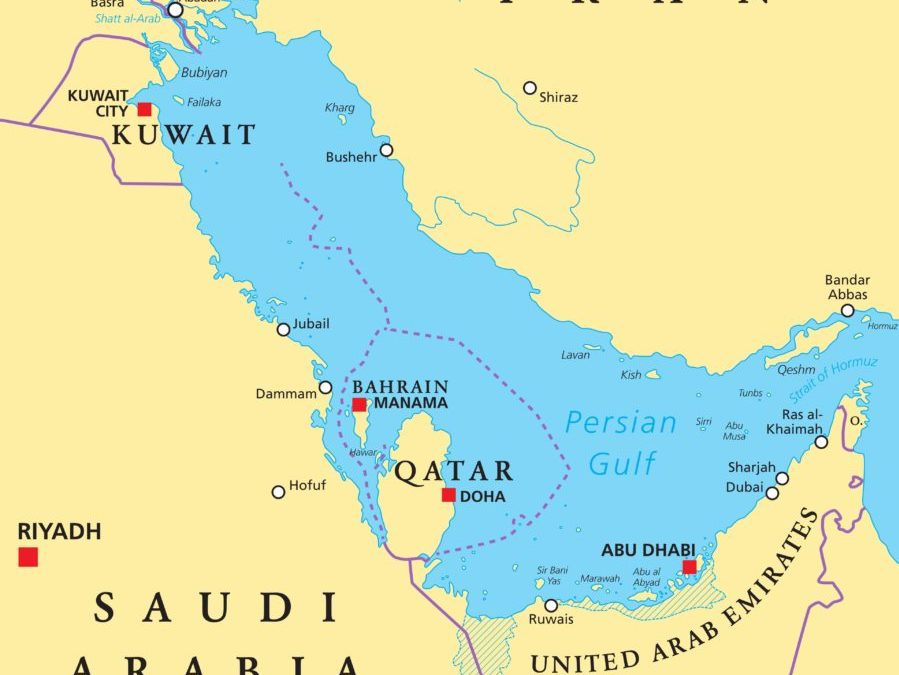 The conflict had been raging since Iraq’s invasion of Iran September 1980.

But for the first eight months, it had been mostly fought on land, supported by airstrikes.

Then in May 1981, Saddam turned his attention to the sea.

He declared all ships going to or from Iranian ports in the north of the Persian Gulf were legitimate targets.

And in doing so, he brought the rest of the world into the conflict.

Choking off the world’s oil supply

In the 1980s, the US and most of the world relied on oil coming from the Gulf region.

According to University of Texas research, “the Tanker War led to a 25 percent drop in commercial shipping and a sharp rise in the price of crude oil.”

It wasn’t a sustained hike in the oil price.

In fact, as the University of Texas researchers note, “the real global oil price steadily declined during the 1980s”.

Due to the hazards in the Gulf waters during the Tanker War, insurance premiums on oil shipments skyrocketed.

And Iran lowered the price of oil to compensate.

But the world got a clear sign of how sensitive the energy markets are to unrest in the Gulf region.

Gulf oil is still vital for the world economy

OK, these days America is less dependent on Middle Eastern oil than it was in the 80s.

That’s thanks to huge domestic output from its shale fields.

In fact, the vast supply from its Bakken, Permian Basin and other shale assets makes the US the biggest oil producer in the world.

But that doesn’t mean the Gulf has lost its importance for the world’s energy supplies.

Far from it, as Harvard University professor, Nicholas Burns, explains:

“The U.S. is no longer as dependent on the flow of oil from the Gulf as back then, but all of our allies are. So, for the functioning of the global economy, it’s still a vital waterway.”

That’s why the oil price reacts to trouble in the Gulf.

Just the idea that oil supply from the region could be interrupted sends shock waves through the market.

Look at what we’ve seen over the last month.

On 12 May, four tankers were hit by explosive “sabotage attacks” in the Gulf of Oman.

They were anchored off the United Arab Emirates, the other side of the Strait of Hormuz from the Persian Gulf.

No one was hurt. And the tankers weren’t yet carrying anything, although they were soon to be loaded with Saudi oil.

America accuses Iran of planting limpet mines that did the damage.

France24 reports: “US Secretary of State Mike Pompeo has said that Iran was trying to raise the price of oil as Washington works to end Iran’s exports of crude.”

But Iran denies responsibility and condemned Pompeo’s statements linking Tehran to the attacks.

“The four attacks were part of a sophisticated and co-ordinated operation carried out by an actor with significant operational capacity, most likely a state actor.”

The finger-pointing and denials go on.

But the point is, when the news of these attacks hit the wires, the price of US crude oil reacted suddenly and violently.

Not that the price stayed up for long.

Another attack, another oil surge

But since then, there have been further attacks on ships in the region.

And again, the oil price reacted.

On 13 June, two more tankers just south of the Strait of Hormuz in the Gulf of Oman were damaged by explosions.

Again, the US lays the blame at Iran’s door, as the BBC reports:

“US Secretary of State Mike Pompeo swiftly accused Iran of being behind the attacks. He said the assessment was based on the “intelligence, the weapons used, the level of expertise needed to execute the operation, recent similar Iranian attacks on shipping, and the fact that no proxy group operating in the area has the resources and proficiency to act with such a high degree of sophistication”.

And again, Iran denies any involvement.

Since this second round of attacks, the price of crude oil has jumped again.

This could be just the start…

If these are just isolated events that are forgotten about, the oil price will fall back.

But they look to be caused by an increasing level of unrest in the Gulf region and antagonism between the US and Iran.

“Taken as a whole, these unprovoked attacks present a clear threat to international peace and security, a blatant assault on the freedom of navigation, and an unacceptable campaign of escalating tensions by Iran.”

And if the situation escalates to a level where it threatens the supply of oil passing through the Strait of Hormuz, it has serious implications.

“We need to remember that some 30% of the world’s (seaborne) crude oil passes through the straits. If the waters are becoming unsafe, the supply to the entire Western world could be at risk.”

And things do look to be heating up.

Just this morning comes news that a US military drone has been shot down.

“One or more unnamed US officials were quoted by Reuters and AP news agencies, saying the intelligence drone was downed in international airspace over the Strait of Hormuz, south of Iran.

This contradicts reports by Iran’s state-run IRNA news agency which said the country’s Revolutionary Guard had shot down an American drone in its airspace.”

Iran has been denying any intention to escalate the Gulf situation to conflict with the US.

Well, knocking out US hardware is a funny way to show that. It’s almost guaranteed to provoke Trump into further action.

And this comes just one day after Trump announced he’s deploying another 1,000 US troops to the Middle East in response to Iran’s “hostile behaviour”.

Both sides say they don’t want conflict. But right now, it looks like conflict is a real possibility:

This from Oilprice.com, quoting a note from Commerzbank:

“The US and Iran are each accusing the other of being behind the attacks. Meanwhile, the US has sent another 1,000 troops to the crisis region. Though neither side wants any military confrontation, the possibility of this happening nonetheless – through carelessness or a series of unfortunate circumstances – cannot be ruled out entirely.”

Well, with US crude up 9.2% in the past week, it certainly looks like the oil market is pricing that risk in.

And traditional safe-haven assets like gold and silver have been moving higher, too.

That’s partly due to the Fed signalling lower interest rates late this year, which makes gold more attractive as an asset.

But the move also came on the back of news of the drone strike hit the newswires.

It’s a sign that traders are nervous about what’s going on in the Middle East – and how it could impact on the oil price… and the stock market.

Not that the stock market seems to be worried at all…

One is Donald Trump’s showboating about how great he’s made America in his first term… and how great he’ll keep it if he’s re-elected.

Investors love that feelgood stuff – even if he’s given little detail about any new policies. And even if he’s hugely overstating how well America is doing… and glossing over the fact that recession is a-coming.

Which brings us to the second thing investors are obsessed by:

The Federal Reserve and the prospects of a rate cut this year.

At the end of its latest two-day policy meeting yesterday, the Fed left rates on hold.

But crucially, it changed the tone of its policy statement, as the FT explains:

“The Federal Reserve on Wednesday ditched its language about a “patient” approach to policy and said it would “act as appropriate to sustain the expansion”.

“The dovish stance from the Fed came as it said “uncertainties” about the economic outlook have increased and noted it would “closely monitor the implications of incoming information”.”

Time to be cautious

Should investors be piling into stocks as the Fed prepares for drastic measures to combat the coming recession?

Or should they be spreading their risk by buying some alternative financial assets such as gold and crypto currencies?

The Dow Jones is rapidly approaching all-time highs at 26,953. It’s just a couple of hundred points away as I write.

Perhaps it will finally break through that level – and we’ll get the fabled “Melt Up” that marks the beginning of the end of this 10-year bull market.

Or maybe there will be huge resistance at that level and the market will form an ominous ‘Double Top’… before a substantial collapse.

But with the very real threat of conflict in the Gulf, the chance of an oil price shock and stock market prices looking ever ‘frothier’, it might pay to be cautious.

And if investors do decide to take fright, they could well head into non-correlated assets such as gold and cryptos.