The secrets of the billionaire “Grave Dancer” 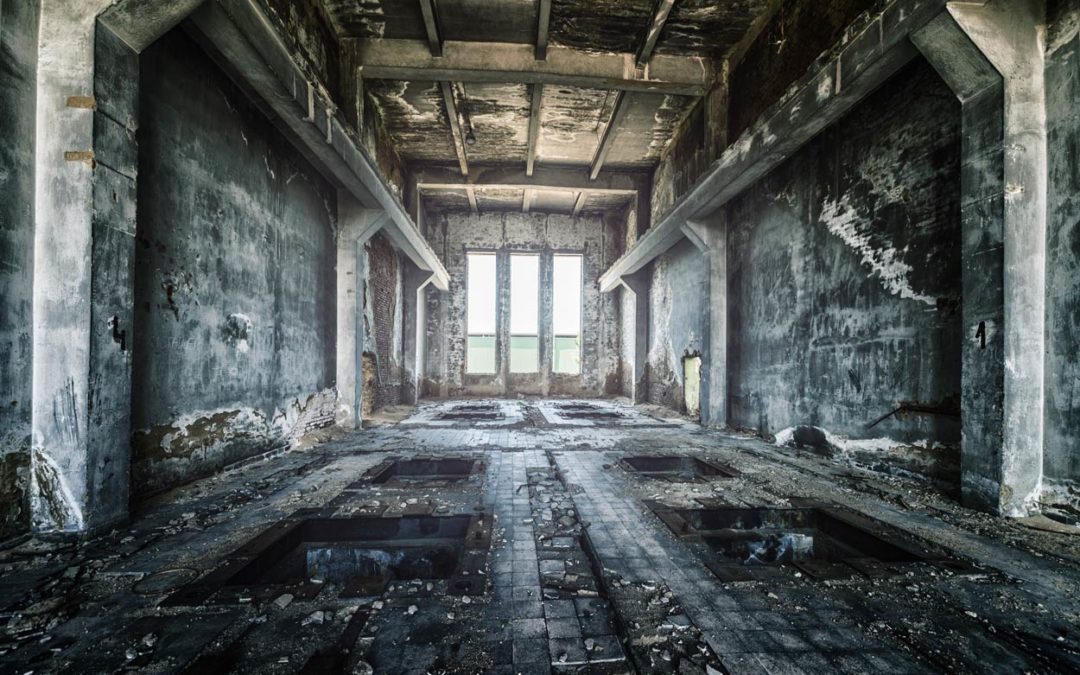 Shared some of the same anxieties… and found similar things fun.

The origins of a global business empire

At 12-years old, most boys are interested in playing with their friends, having a kick around in the park or watching TV.

Or… more likely, these days… they’ll spend most of their spare time on their phones or games consoles.

It’s a rare breed that shows entrepreneurial or investment nous at such a young age.

But Samuel had it right from that early age.

And it’s stayed with him throughout his life… making him one of the world’s richest men.

Today he’s worth $5.5 billion, earned from a succession of smart business deals and investment decisions.

And he’s recently made one of his most timely and shrewdest investment moves into “the world’s safest asset”.

We’ll get to that and why you should consider doing the same in a moment.

But the origins of his enormous wealth can be traced back to feeding a schoolboy market for titillating material in the 1950s.

Samuel got what he calls his “first lesson in supply and demand” when he was 12.

Forbes magazine explains how he’d catch the train from his home to downtown Chicago to go to school.

Pretty soon, he discovered the newsstand guys were happy to sell him “lifestyle” magazine, Playboy, despite his young age.

Which is when his business head switched on…

It wasn’t long before he figured out he could make a nice turn by buying in bulk and selling them to his porn-hungry mates for a hefty mark-up.

Forbes: “[he] would buy copies for 50 cents apiece and deliver them to his suburban peers for a hefty $3, pocketing a 500% profit.”

As he told Forbes:

“I recognized a need common in all 13-year-old boys, saw a restriction on supply and I took advantage of it.”

But the way he earned most of his money was in property… treating it just like he did with those Playboy mags – buying cheap and selling when at a huge profit.

And he’s built a huge empire on his real estate dealings, initially residential properties, but expanding to commercial.

The idea was simple, buy cheap, distressed property, rent it out to generate income and then sell it on for a big profit.

Simple enough, but it was the way he did it that made Zell rich.

Investment site, The Balance, has the story:

“In the 1970s, Zell expanded beyond his initial interest in residential real estate and began to acquire office space under the aegis of Equity Office Properties Trust, or EOP. Zell structured his business as a series of real estate investment trusts, or REITs, under the Equity umbrella. EOP was one REIT; Equity Residential Properties Trust was another.”

The REIT structure was a shrewd move by Zell.

REITs have various tax advantages, such as reducing income tax on any income he made on his investments.

So, it allowed Zell to slash his corporate income taxes massively.

And it was the perfect way to cash in when he property cycle turned.

“Equity Properties Management grew throughout the 1970s, but it was not until the 1980s that Zell saw his opportunity to become a big-time real estate mogul. In the mid-1980s, U.S. real estate crashed, and Zell swooped in to acquire office and residential properties at fire-sale prices. When real estate rebounded, Zell realized vast profits from his investments.”

When the bust came, and they had to sell at rock bottom, Zell was there to scoop up the bargains.

That’s why he earned the nickname, “The Grave Dancer”.

As Forbes explains, “the nickname dates from the ‘70s, when Zell penned an article attributing his success to dancing on the skeletons of other people’s mistakes.”

And Zell became smarter still as an investor.

Having made so much money from real estate, he decided to diversify to spread his risk.

Using the same basic strategy as he employed in his property empire, he’d buy up cheap, distressed companies.

Again, he’d flog them on for huge profits after turning them around.

It’s no great secret. But he’s very good at it.

Telling signs from one of the world’s great investors

Right now, there are two interesting things about what Sam Zell is up to: what he’s selling and what he’s buying.

According to Bloomberg, he’s been getting out of real estate for some time now.

“Zell, 77, who’s described himself as a net seller of real estate since at least 2015, said in April the industry was in the eleventh inning ahead of a “tsunami of supply.” Equity Residential, the real estate investment trust where Zell is chairman, has sold $8.5 billion of properties since the start of 2015, according to a company presentation.”

Buy stuff that’s in short supply and high demand. Sell when supply is great, and demand is low.

And that’s where his next idea is interesting…

Why now is a smart time to buy gold

Sam Zell is buying what some people call “the world’s safest asset” – gold.

Frank Holmes, writing in Forbes, is on the story:

“Billionaire Sam Zell just announced that he bought gold for the very first time in his life because, as he puts it, “it is a good hedge.” In a recent Bloomberg interview, the Equity International founder and creator of the real estate investment trust (REIT) admitted to seeing an opportunity in gold’s increasing supply shortage.

“For the first time in my life, I bought gold because it is a good hedge,” Zell, 77, told Bloomberg. “Supply is shrinking, and that is going to have a positive impact on the price.”

“He added: “The amount of capital being put into gold mines is at most nonexistent. All of the money is being used to buy up rivals.”

By the way, not many people know the gold market like Frank Holmes.

He’s an industry veteran, having been writing about and investing in precious metals for the past 30 years.

And he agrees with Sam Zell’s assessment of the supply/demand dynamics and investment rationale:

“I believe Zell’s reasons for investing in gold are sound, and I’ve discussed them in detail a number of times before. Supply is indeed shrinking. The “low-hanging fruit” has likely already been mined, and it’s become prohibitively expensive for many companies to look for large-scale deposits, to say nothing of developing them. As you can see below, the number of ounces in major discoveries has been falling for years, and exploration budgets are still far below the 2012 peak.” 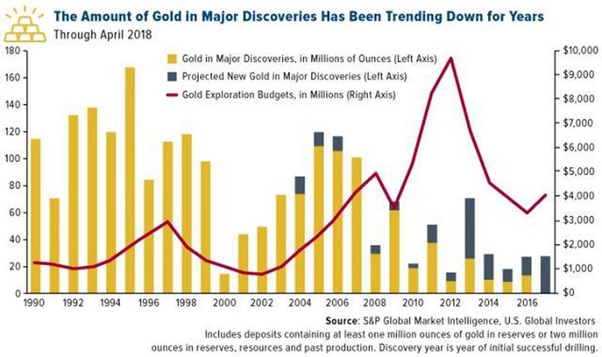 It’s an argument that’s backed up by Pierre Passonde, who founded Franco-Nevada, the world’s largest gold-focused royalty and streaming company.

“So where are those great big deposits we found in the past? How are they going to be replaced? We don’t know.”

In other words, the supply of gold is dwindling.

But what about demand?

Back to Frank Holmes:

“As if to confirm Zell’s reasoning, the Canadian Imperial Bank of Commerce (CIBC) forecast in a report this week that a gold deficit will emerge in 2019 “on the back of stronger demand over the next two years, primarily from bar hoarding, net central bank buying and exchange-traded products (ETFs).”

According to Holmes, there is no slowdown in demand. Which, for long-time Monkey Darts readers, will come as no surprise…

Smart investors have been tucking gold away while the stock markets have been rising and gold has been suffering.

And it’s not just investors.

“We’re seeing appetite grow for the precious metal, not just from investors but also central banks, which have been net buyers since 2010. According to CIBC, several central banks stepped back into the market last year, most notably the Reserve Bank of India (RBI), which until recently “has expressed negative sentiment around gold purchases.”

By the same laws of economics that have guided Sam Zell in turning his first 50-cent investment in 1953 into a $5.5 billion fortune, that means gold prices should be heading higher.

And indeed, they are…

Gold is going up too.

Why gold is soaring… even as stocks move higher

The thing is, you’ve probably heard several times that gold tends to move in the opposite direction to the stock market.

You’ll have heard it from me on more than one occasion if you’ve been generously reading these emails for long enough.

Normally, in a runaway stock market boom, gold and silver tend to get shunned like a woolly jumper in summer.

And vice versa – if the stock market’s in trouble, gold does well.

Because we still see BIG trouble ahead.

And it’s why Sam Zell, one of the smartest businessmen and investors on the planet has been loading up on gold, too.

He’s suspicious of the stock market at these elevated levels, as we are.

He’s buying a little ‘insurance’ to help hedge his wealth in case of the downturn we expect is coming.

And it’s something you should consider doing, too, if you haven’t already acted on our previous suggestions to do so.

Putting a hedge in place

Don’t think of an investment in gold as being a sure-fire way to overnight riches.

That’s not what this is about.

It’s about hedging the other investments you may have in the stock market or even your savings.

Stocks are going up because rates are on hold. With the threat of higher borrowing costs removed (for now), investors see that as positive for businesses and therefore markets.
As for gold, it’s reacting to a falling dollar for one thing. As it is priced in dollar, when the dollar falls (due to rates not rising), the dollar value of gold goes up.

But it’s also because if interest rates are not increasing, the opportunity cost of holding gold (which pays no interest at all) decreases.

There’s another reason, though, for gold rising…

And they’re putting a hedge in place – something to protect their wealth if there’s a major stock market rout.

All of which sounds like a smart decision to be making right now.