How Electric Fields in Your Cells Could Prevent Cancer and Aging

In Moscow in 1980, he won the gold medal for the 4000m individual pursuit, chasing his nearest rival down and finishing six seconds clear as he rushed across the line.

When he won, he stepped off the bike, kneeled and kissed the finish line. The Moscow crowd roared with appreciation. 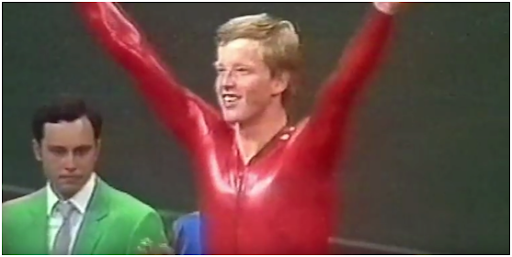 Then his life took a terrible turn.

In 1999, Dill-Bundi was diagnosed with a malignant brain tumour.

He received surgery, high doses of radiation to the head and a long course of chemotherapy.

The picture below shows his baseline MRI. The black regions at the front of his head in the MRI shows where he had surgery, and the white inflammation is from a growing tumour. 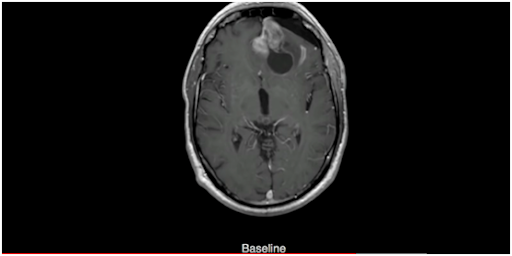 At first, the treatment seemed to work. But just a year later the tumour grew back with a vengeance. Dill-Bundi was told by his doctors that he had about three months to live.

So he decided to look around for more experimental treatments.

That’s when he heard about a company called Novocure.

This company was experimenting with a treatment that used “electric” therapy to reduce the pace of growth of tumours using an electric skullcap.

For 18 hours a day, Dill-Bundi wore this skullcap, while it zapped away at the cancer cells growing in his brain.

The results were slow at first. But we can see from his MRI that by month six, the tumour had responded and had even begun to disappear. By month 12, it was completely gone.

Today Robert Dill-Bundi is alive and well. He is 60 years old. It sounds like a miracle story. Although this story is complicated by the fact that in August 2013, the 57 year old cyclist lost awareness while behind the wheel of his BMW and crashed into eight vehicles, injuring 11 people.

He was convicted of causing two accidents and received a suspended sentence.

Why this stock has rocketed 800%

Meanwhile the company that developed his electric cap treatment, Novocure (Nasdaq: NVCR), has become one of the great success stories in medical care.

In the last five years, the stock has risen 800%, and I think it is still has huge potential from here.

The cap, called Optune, is essentially a portable power supply that works by sending an alternating range of frequencies to the tumour.

The frequencies produced by the device are known as tumour treatment fields, and they work by disrupting the way cells divide.

Patients are expected to wear the cap for at least 18 hours every day, while also taking a standard chemotherapy drug known as temozolomide.

Other than a slight warming sensation, the caps have not demonstrated any side effects. There is no pain, no infections, nausea, or the extreme fatigue that would be expected with traditional cancer treatments.

The device was initially approved by the FDA for glioblastomas, which are tumours of the brain or spine. And it has been hugely successful.

According to the data collected from a five-year study between July 2009 to November 2014, the survival rate of glioblastoma patients improved from 5% to 13% – more than double the original survival rate without the Optune cap.

What if this could be used on our organs?

Since then Novocure has been growing very quickly, as this device has grown more and more popular with people who have glioblastoma multiforme [GBM].

But just a few weeks ago, the FDA announced approval for a second condition for the device.

This disease is called mesothelioma, which is a cancer than lines the lungs, the stomach and the heart. This is not a huge new market. Mesothelioma, thankfully, is a rare disease. There are about 3,000 diagnoses a year in the US.

But it demonstrates that this type of therapy may be useful in combating cancers outside the brain.

That could include FDA approval for treatments in lung cancer, pancreatic cancer and elsewhere….

In fact I think we could be seeing a whole new field in medicine opening up that targets electrical activity in our cells.

For several years now, the UCL biochemist Nick Lane has been making the case that the electrical charges in our cells are actually central to the organisation of life.

It’s all down to the way energy is powered in our cells. That work is done by our mitochondria.

“Mitochondria were bacteria once… pre-living bacteria that got into another cell. And they became, in the end, the power packs of our cells. So all the energy that we need just to live, it’s all coming from the mitochondria.

And the way that this links into aging and death, is effectively that… there is a cost to living, there’s a cost to doing everything; and that cost depends on the speed at which we’re living.

So if we are living our lives at a very fast rate, we tend to, in effect, wear out sooner, we don’t see that so much among humans but if you compare the lifespan of say mice or rats that have a very fast metabolic rate, it’s very familiar to people in terms of a fixed number of heartbeats. There is a very strong relationship between metabolic rate, the rate at which we’re taking in oxygen and burning up food, and lifespan.

And so mitochondria, which are often dismissed essentially as a power pack, they have been really responsible for the evolution of all of this complexity in life and I think if we’re looking at how can we extend human lifespan and so on, we’ve got to think about it, not from the point of view that here’s a power pack, which is just one of you know thousands of parts in a cell, but this was one of two key players that gave rise to all of that complexity…whether a cell is going to make a copy of itself, divide, or die at that point, mitochondria are essential to all of that.”

This is a fascinating way of looking at our biology.

There are whole fields of biological enquiry could open up as a result: in cancer treatment, in aging and longevity, in boosting our metabolism.

In short, Nick Lane is making the case that all life is basically electrical.

We have a charge across the membrane in our mitochondria that is amazingly powerful: about 30 million volts per metre, which is the same as a bolt of lightening.

These mitochondria became the means by which we are able to scale up from simple organisms to the more complex organisms we are today. We are an astonishing electrical machine. And it’s very likely that we will see a great many more treatments and devices developed that work with the electrical activity in our cells.

There are already a whole host of biotech start ups focused solely on the mitochondria.

Meanwhile Novocure is leading studies of how we can manipulate biology using electric fields. What we’ve seen is that when cells are exposed to electric fields, the proteins that carry charges that can be interfered with to the extent that the cells don’t divide properly, and even self-destruct.

And we know that electric fields can also regulate a whole variety of cell functions, including growth, adhesion, differentiation, proliferation, activation of intracellular pathways, secretion of proteins and gene expression.

It will be very very interesting to see what follows.

If you would like to listen to Professor Lane explain his work in six minutes, then have a look at this video.