Warning from the Italian bond vigilantes 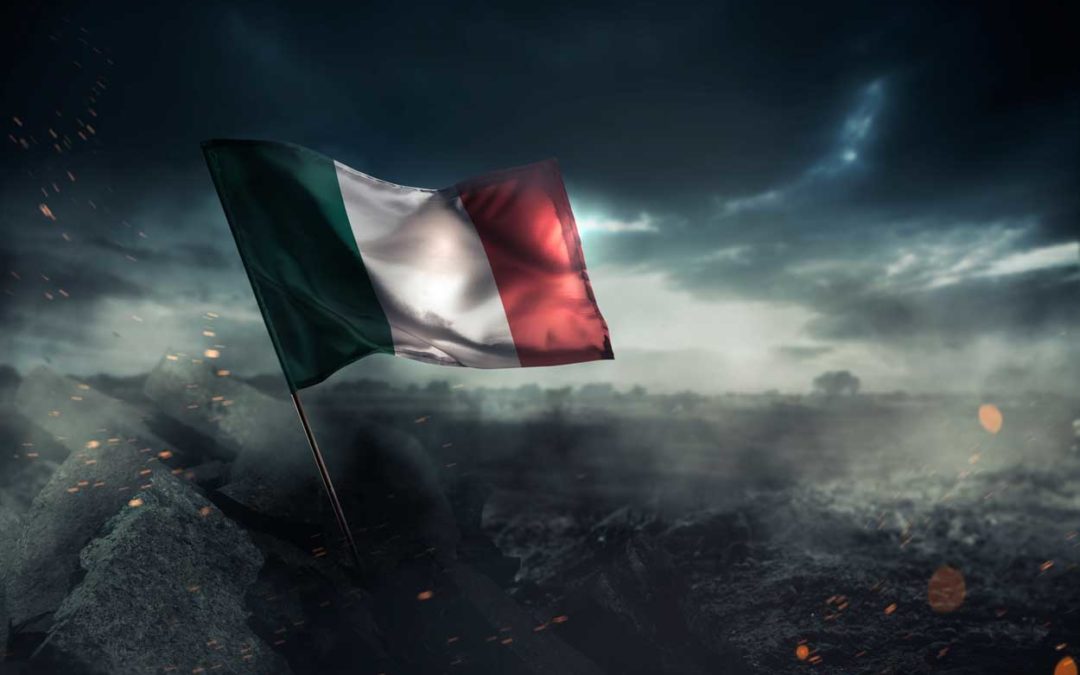 Most of the talk about markets focuses on the US…

It’s all about what Trump’s up to.

Who he’s upsetting. Who he’s making deals with. Whether he’s going to be impeached for past misdemeanours.

The whole world seems to revolve around Donald Trump.

Only it doesn’t. You know that, and I know it.

It’s not all about Trump

There’s LOADS more going on out there that – when you add it all up – has the potential to trump Trump when it comes to moving the market.

I’m not saying the US stuff isn’t important. Of course, it’s very important.

The US is the world’s largest economy – and by some distance.

According to the latest IMF data, the US economy is worth (in terms of GDP) $20.4 trillion.

And it’s four times larger than Japan’s, which at $5.1 trillion is the third largest economy in the world.

In fact, the US represents a huge chunk of the entire world economy.

This from the World Economic Forum:

“The sheer scale of the United States’ economy puts others into perspective. It is larger than the combined economies of numbers four to 10 [of world’ largest economies]. Overall, the global economy is worth an estimated $79.98 trillion, meaning the US accounts for more than one-quarter of the world total.”

Just for the record, our own little economy here in the UK is worth a miserable $2.94 trillion.

And that’s BEFORE Brexit.

Where we end up in the list of the world’s economies after we’ve ‘left the club’ is anybody’s guess.

But for now, let’s just think about the US some more.

The media’s four obsessions with America

Despite all that… there is plenty more we as investors and traders need to think about when we’re trying to figure out what really matters for our money.

And we’ll consider those things right after we’re done talking with America.

Here’s what we know (or have been told) about America right now. It’s been blurted out in just about every newspaper and on every financial website you look at…

1. The US stock market only goes up: It doesn’t, of course. But that’s how it feels when you read the news. The S&P 500 is in the “longest bull market ever”. And it, the Dow and the tech-focused Nasdaq have hit all-times this week.

2. The American economy is growing FAST: Latest data says Trump’s economy grew by 4.2% in the second quarter. And that figure’s been revised up from the 4.1% July estimate. The economy is on track to hit Trump’s 3% growth goal for the full year.

3. US consumers most upbeat in 18 years: A survey which measures Americans’ sentiment on the economy and its outlook over the next six months, showed the highest reading since October 2000.
Those last two got the President excited enough to fire off a tweet yesterday:

4. America’s striking record trade deals that will lead to a “stronger economy”: Trump this week signed what he called “one of the largest trade deals ever made” with Mexico. He’s given Canada a deadline of tomorrow to come in on the deal which he wants to replace the 25-year old NAFTA.

These four points are what the media is focussing on right now.

And sure, it all sounds like everything’s going brilliantly.

But it’s too early to tell. There’s plenty that could derail this apparent success.

On the trade thing, Trump needs Canada to sign a deal quickly so an agreement can be sent to US Congress.

Miss the deadline, and it jeopardises the US-Mexican deal.

And Canada’s Trudeau won’t be pressured into signing unless it’s a “good deal for Canada”.

US stock markets have been riding high this week since news broke of the US-Mexican deal.

If things start unravelling on the deal front, expect some of those market gains to unravel too.

What if consumers zip up their wallets?

Similarly, how about this talk of consumer confidence at 18-year highs?

What does it take to knock that down a peg or two?

In last Thursday’s Monkey Darts, we talked about investors’ complacency. Like they don’t see stocks going any way but up!

And there are signs of that complacency rubbing off on consumers too.

As Jim Baird, chief investment officer at a Michigan firm of financial advisers, said it “suggests a degree of skepticism about trade, inflation, or anything else knocking the economy off track.”

Good while it lasts! Consumers will keep spending!

But at the first sign of trouble – like an escalation in Trump’s trade war with China, which could hit the economy – watch them zip up their wallets!

And ultimately, that’s not good news for stocks.

How about America’s blistering growth rate? Trump is trumpeting that he’s on track to hit his annual growth target of 3%.

But there are potential headwinds that could cause problems.

“We expect the pace of the expansion will cool in the second half of 2018, as the boost from fiscal stimulus starts to fade … and trade protectionism weighs on activity.”

Investors and analysts will be keeping a close eye on those growth numbers for the next two quarters.

Record streaks have to end sometime

And about this record-breaking bull market.

Just because the S&P and other US indices keep hitting new highs, it doesn’t mean they’ll keep doing it.

That relies on the willingness of investors to keep throwing money at it with abandon.

And according to the Financial Post, there are signs that investors are starting to at least think about playing it safe with their money:

“Rather than relentlessly chasing winners, investors are slowly rotating money out of darling companies, such as tech giants, and into laggards like drug makers and industrial conglomerates. A preference for safety is creeping back, with consumer staples and health-care shares leading the market over the past two months.”

Makes sense to me.

The question is… what’s it going to take for those investors to go a step further and take some money off the table… and move to cash?

Which is what investment big-hitter, Stephen Roach, thinks could be a smart move…

He believes the current market rally in US stocks is “getting dangerously close to folding”.

“[Roach] suggests investors are in denial when it comes to the risks associated with U.S. trade tensions. Roach predicts the threat could spark a prolonged sell-off and make the mighty greenback look very attractive before the end of year.

“If we move towards the midterms and there is still some lingering tension on the trade front, cash is going to be a very good place to be.”

In other words, investors could soon get spooked by Trump’s reckless trade policies and yank their money out of stocks to hide in cash.

According to a Reuters report, US money managers are already going to cash as a defensive move ahead of the midterm elections.

“The likelihood of a Democratic party takeover of at least one house of the U.S. Congress in the midterm elections in November is prompting some portfolio managers to move more money to cash and rotate away from sectors like financials and technology that could see greater regulatory scrutiny.”

If that trend gathers, it could have a negative effect on the market.

See what we’re looking at here?

We have all this non-stop bullish news about the US…

But it seems like it’s all built on sand and hope.

And it’s not going to take much to bring it down.

This irrational confidence from consumers and investors that’s propping up the market could quickly evaporate.

And not just due to what’s going on in Trump’s America.

As I said earlier, there’s plenty going on in other parts of the world.

We looked at some of them in last week’s and previous issues of Monkey Darts:

All very real and present threats that could knock global markets… including the seemingly invincible US stock market.

The biggest threat in Europe

Right now, one of the major risks is Italy.

It comes down to the recently formed coalition government and their fight against EU rules.

More importantly for investors, it’s how the markets react.

“Italy’s economy is the third largest in the European Union and the country’s new coalition government is currently working on next year’s budget. Its financial plan will be closely scrutinized by European authorities and, more importantly, by market players, following promises to increase public spending

“Investors are wary of rises in pensions and state benefits, given that Italy already has a significantly high public debt pile — the second largest in the euro zone, at about 130 percent of gross domestic product (GDP).

“If market players do not approve of the next budget, due around October, then borrowing costs for Italy are likely to go up, which in turn could affect neighboring European countries. It could also create problems for certain European banks that hold Italian debt.”

Italy is a debt timebomb.

Its banks and international banks and investors also own huge amounts of government debt which is at risk of being downgraded by credit agencies. (Fitch is due to review Italy’s credit rating on Friday.)

But according to the American Enterprise Institute (AEI) thinktank, foreign investors have been pulling out of the Italian debt market at a rate of €40 billion a month.

That’s a faster rate than at the peak of the Eurozone debt crisis in 2012.

Which is why we’ve seen Italian bond yields spiking in recent weeks. Yields on 10-year government bonds have doubled over the past year.

It’s a warning sign from investors about the government’s intentions.

And according to AEI, it’s a warning the government must take seriously:

Hopefully, it says, “the new Italian government is heeding the clear warning signals being sent to them by the Italian bond market vigilantes. Maybe then that government will be less inclined to deviate from the budget discipline being required of it by its European partners. Similarly, maybe then it will be less likely to roll back the market friendly economic reforms of its predecessor. Such policies might give the Italian economy a chance to grow out from under its present public debt mountain.

“If the Italian government does not heed the market’s warning, we should brace ourselves for another round of the Eurozone debt crisis. Bearing in mind that, after the United States and Japan, Italy has the world’s third largest sovereign debt market, we should also fear that an Italian economic crisis would have real spillover effects for the rest of the global economy.”

Trump may be right to be smug about how the US stock market and economy are performing.

And if he can keep it up, good for him.

But it’s not just about what’s going on in the US.

Sooner or later we’re going to find out whether the entire global financial markets are resilient enough to withstand all the emerging threats.